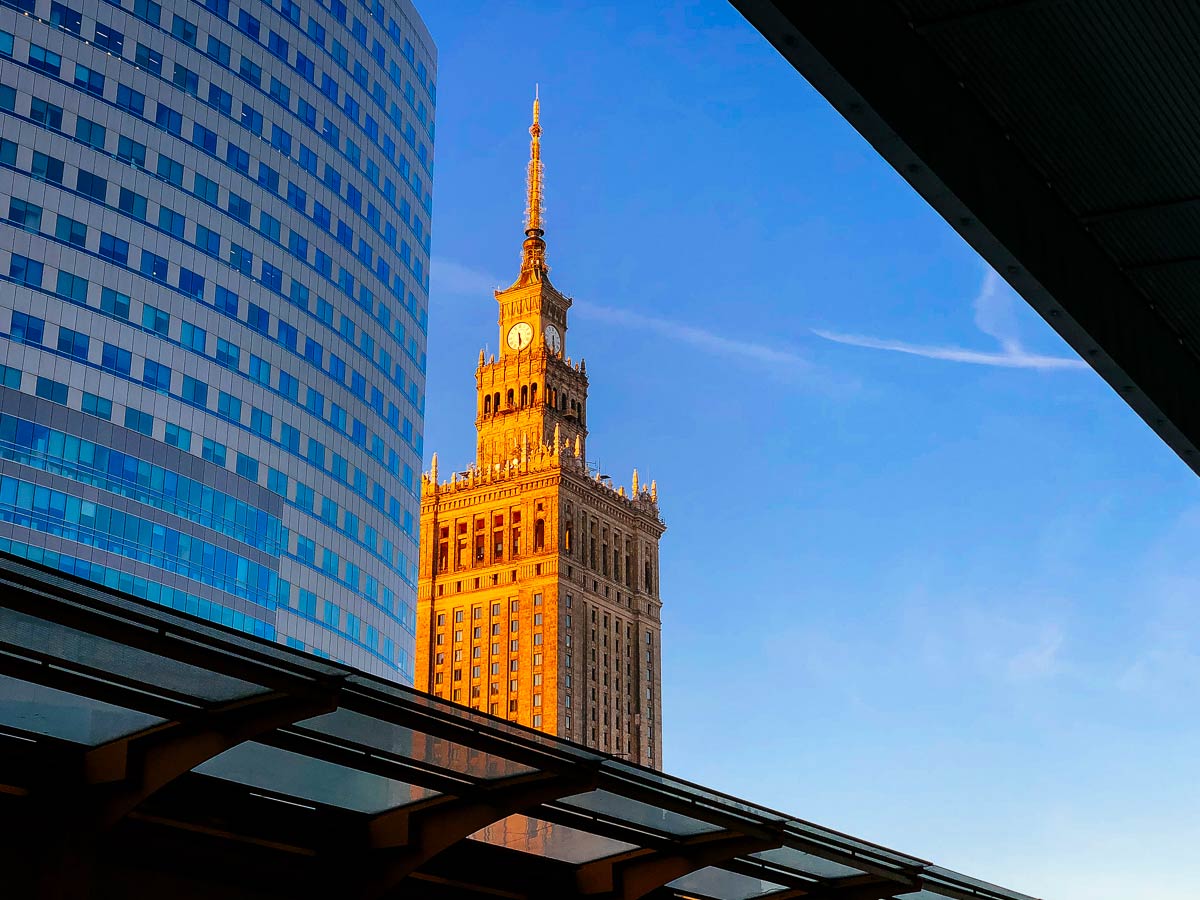 “Stalin’s Gift to Warsaw,” a.k.a The Palace of Culture and Science, as seen from Warsaw’s Centralnia railway station. We were supposed to get off the train here, but things didn’t quite work that out way. Read on for the rest of the story.

Our train to Warsaw was rolling steadily along when an announcement came over the speaker. When it finished, the lady across the aisle leaned over to us and said, “You don’t speak Polish, do you?”

In English, she explained to us that the train was stopping at the next station and wouldn’t continue on. We would have to find another way to cover the last 60 kilometers to Warsaw.

So, we did as everyone else. We collected our belongings, got off the train, exited through the small train station and joined dozens of our fellow passengers at the bus stop outside. 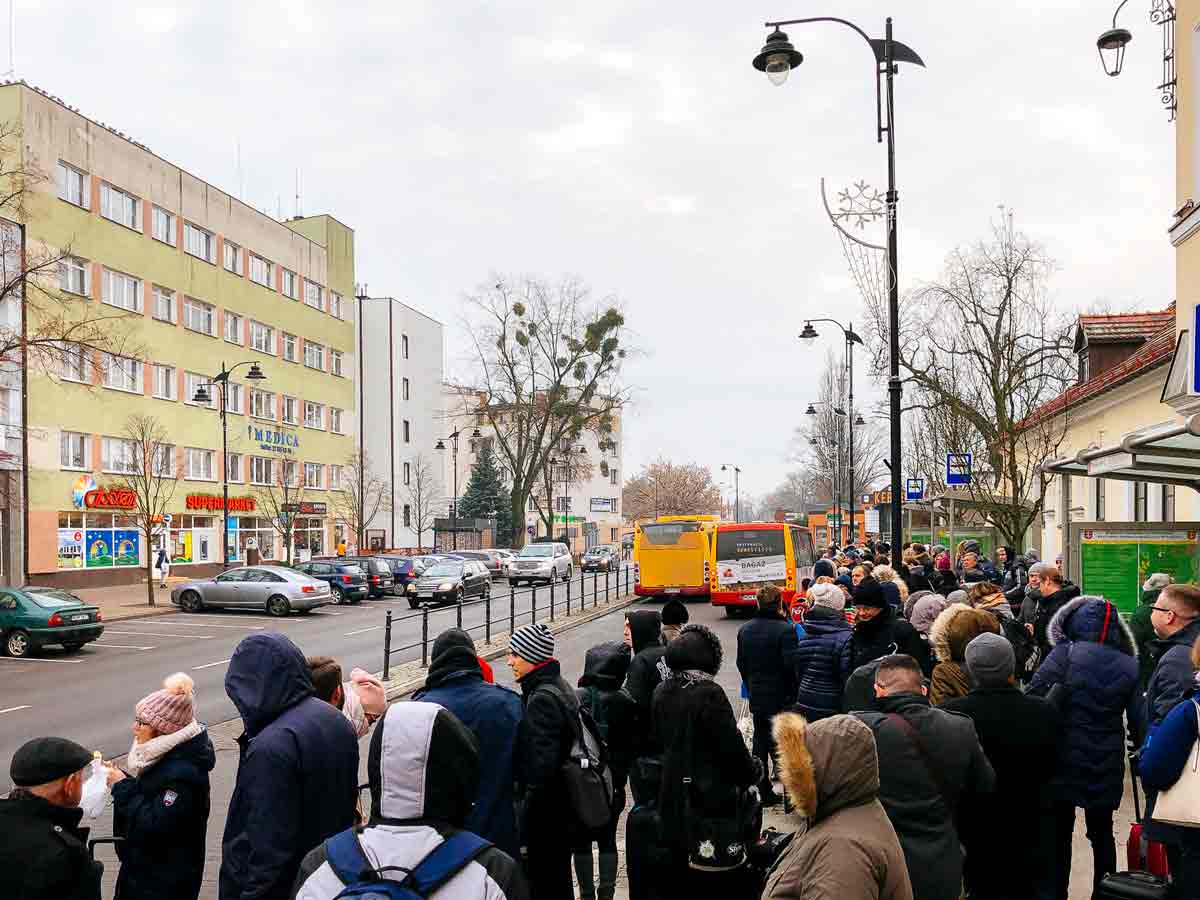 Our fellow passengers milling about at the bus stop, trying to figure out what to do next.

Standing in the crowd, trying to figure out what to do, we realized that taking a bus ~ reading the schedule, figuring out how to buy a ticket, figuring out where the closest stop to our hotel was ~ would be very difficult for us since we don’t speak Polish.

We decided to take a taxi instead.

To get a taxi, turns out all you really need to know is the destination and how to say the numbers, since the fare is a bit negotiable. Fortunately, in Polish, I can count to 499. After talking with three drivers, we found one that was willing to take us to Warsaw.

The ride to Warsaw

Rosemary took a cat nap for most of the ride. When she woke, she looked out the window at the passing buildings, still bleary-eyed and not quite sure where she was. The driver looked at her in the rear view mirror and, with a twinkle in his eye, said “Warsaw.” Too bad he didn’t speak English or we don’t speak Polish. I think we would’ve liked him.

After an easy ride, we finally got to the correct street. As we were driving the street, the driver kept asking us, in Polish, something along the lines of, “are we there yet?” ~ even though we told him the address. As if WE would know where someplace was in Warsaw.

That day I learned how to say “keep going” in Polish. It’s been very useful for subsequent taxi trips.

We arrived safely at our hotel, The Bellotto. Our room was fabulous: high ceilings, big room, large bed, large bathroom, tastefully furnished. Best hotel room we’ve ever had, I think. 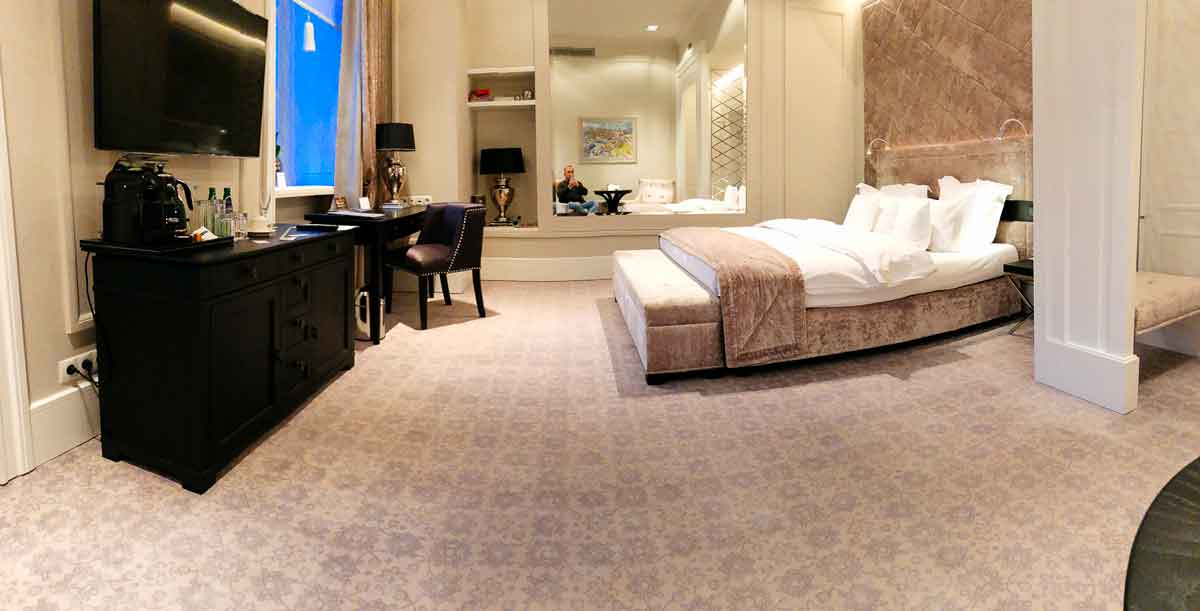 Our best hotel room ever (or at least, to date).

By the time we finished unpacking and admiring our luxurious room, it was dark. We went to the Old Town Christmas Market anyway. It was a typical Polish December evening: dark, a bit windy and misting heavily. But that was OK; our hotel was only one block from the Old Town so we didn’t have far to walk. Besides, as we discovered in Kraków, dark and misty weather makes the Christmas lights glow even brighter. 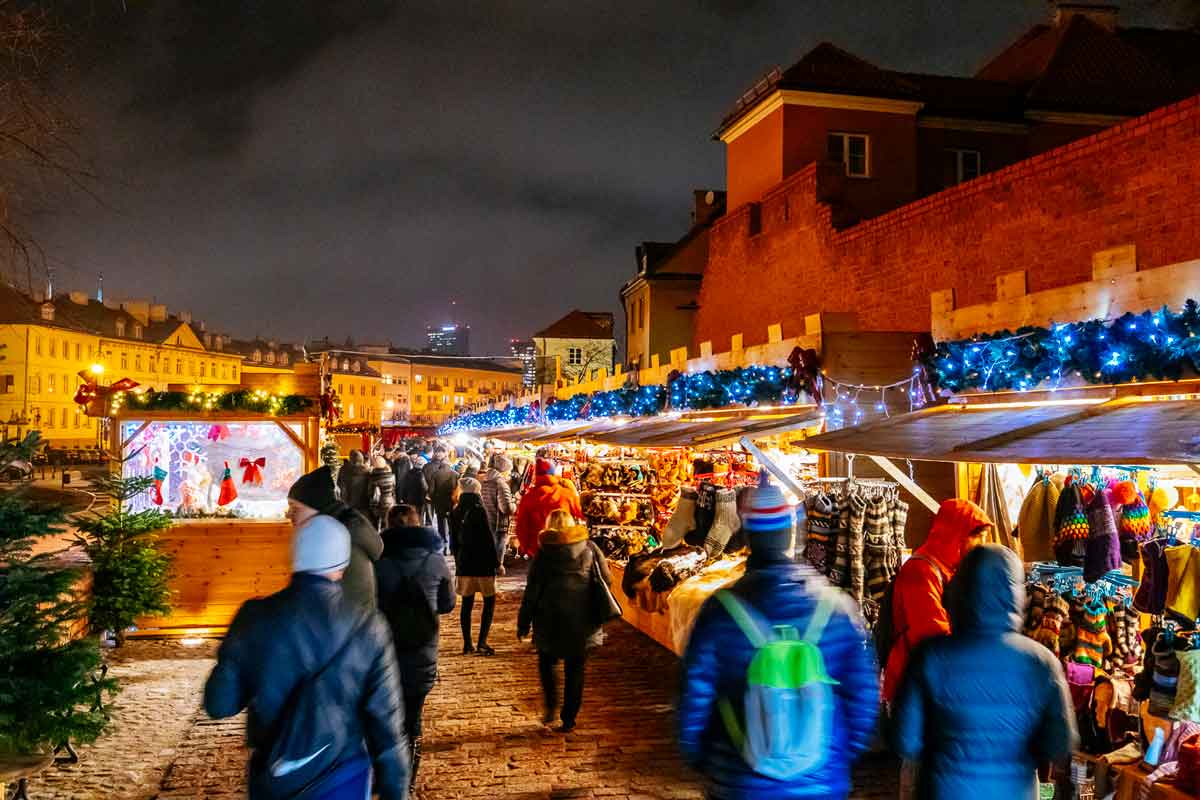 The vendor booths at the Christmas Market.

The vendor booths were few and on the outside of the Old Town. And they weren’t all open yet. The rynek (town square) had a small, poorly decorated and unlit tree. The few booths there had mulled wine and some food.

Disappointment #2: The walking tour the next morning

The next morning we had a walking tour, as we like to do. It started off well, with an overview of the history of the city. Our guide showed us several photos comparing the city’s almost complete destruction during WWII with how it is today. 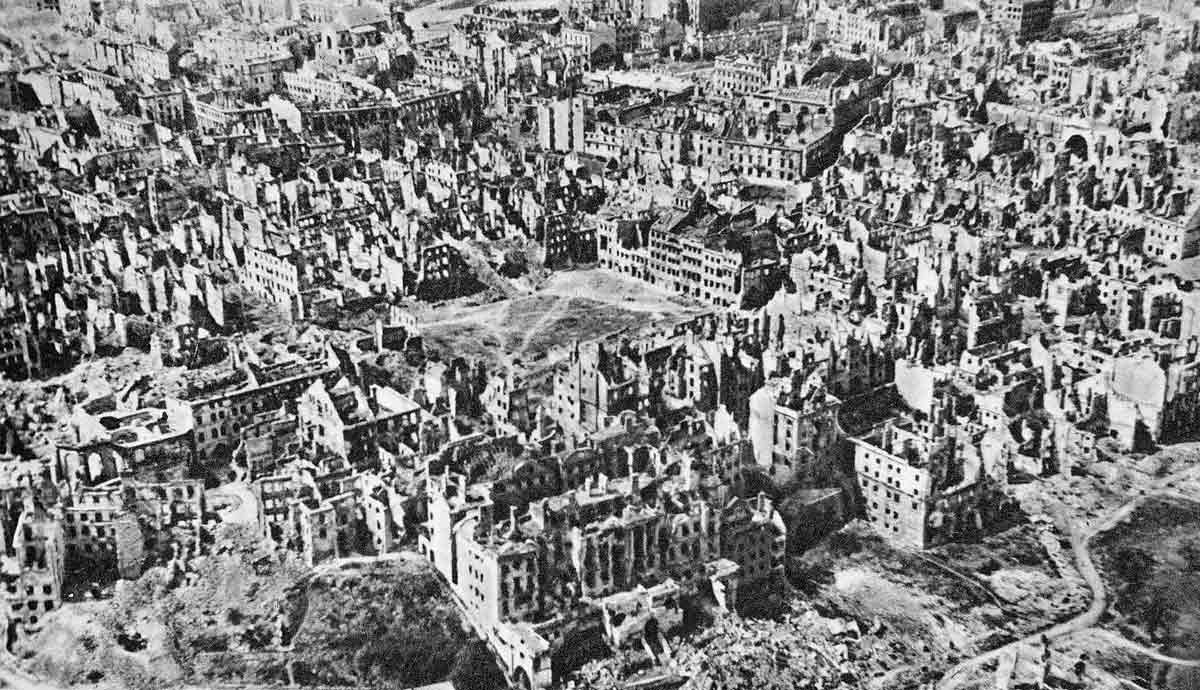 An aerial view of Warsaw’s Old Town taken in 1945. The Nazis deliberately destroyed 80–90% of Warsaw’s buildings. This image is in the Public Domain.

But the tour went downhill from there. First, our guide showed us a set of escalators. They weren’t old, they weren’t terribly new, they didn’t utilize some fancy-schmancy cutting edge technology, they were just there. I think he just wanted to show them to us because there was a public restroom there.

Then, we walked over to Herbert Hoover Square. Our guide was convinced that this was the Hoover that had been in charge of both the CIA and the FBI. I finally had to look up J. Edgar Hoover on the web to convince him that he was thinking of the wrong Hoover. I was unable to convince him that neither Hoover had anything to do with the CIA. (Herbert Hoover had a square named after him to honor him for his efforts in feeding Europe’s civilian population, especially Poland’s, after WWI.)

What’s the cure for disappointment? Pizza! And Rembrandt.

On the first night, after the letdown of the Christmas Market, we decided to have pizza. We found a great place in the Old Town, had delicious pizza and good wine. Made the night all better. 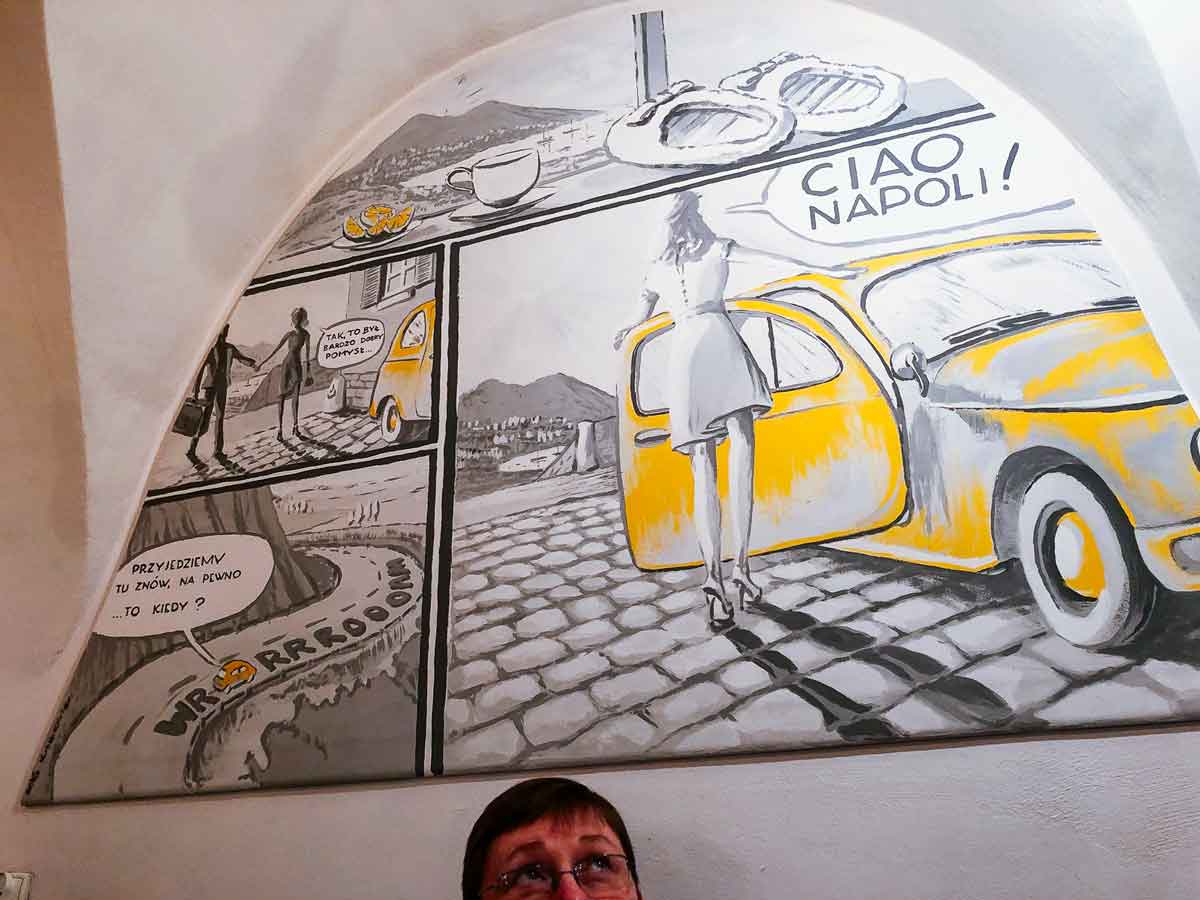 Sitting in Ciao Napoli, waiting for our pizza, we were indeed dreaming of Italy.

The next day, after that train wreck of a tour, we decided to dodge the poor weather by visiting the Royal Castle in Castle Square. The Royal Castle has been painstakingly restored to its former glory after being almost completely destroyed during WWII. In addition to the sumptuously furnished palace interior, there were two Rembrandts and a collection of Canalettos (née Belloto). It was a well-spent (and dry) afternoon. 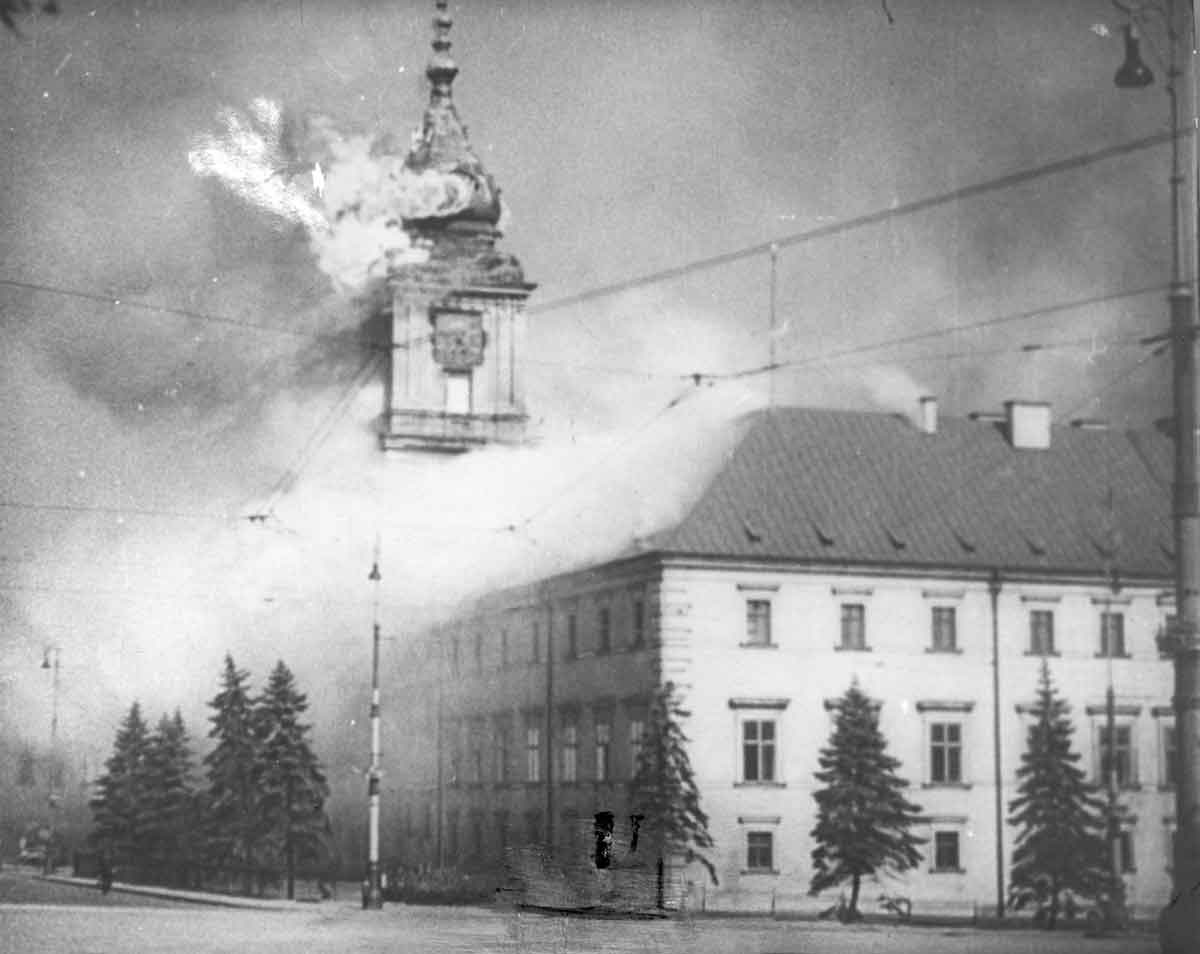 The Royal Castle burning during the Nazi invasion in 1939. This image is in the Public Domain. 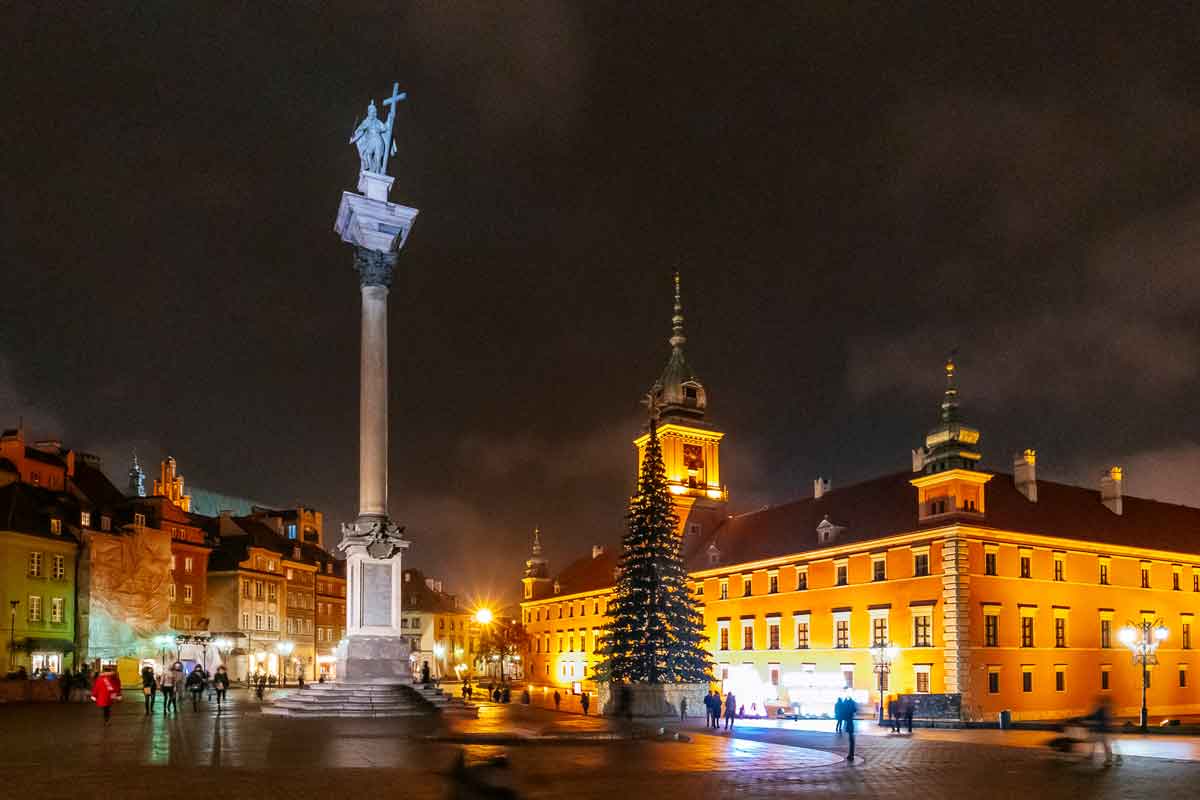 Warsaw’s Castle Square in December, 2018. The Royal Palace has been lovingly restored and Sigismund’s Column has been rebuilt.

It’s true that we found Warsaw’s Old Town Christmas Market disappointing. Our disappointment was undoubtably heightened because we visited Warsaw after visiting the Christmas Markets in both Kraków and Wrocław, both of which were delightful.

But we still consider the Warsaw part of the trip a success: we’ve been to that Christmas Market now, so that’s good; we found a fantastic pizza place (that we’ve since visited again); we found great art at the Royal Palace (Rembrandt and Bellotto); and we stayed in a fantastic hotel room. So, definitely a success.

The train ride home from Warsaw was uneventful. No taxis necessary.

Should you visit Warsaw?

If you have the chance, absolutely. Warsaw is Poland’s largest city and there are many things to do: night life, dining out, sports events, history, etc. Just google “Top 10 things to do in Warsaw” or “food/walking tours of Warsaw” and you’re certain to find many fun things to do.