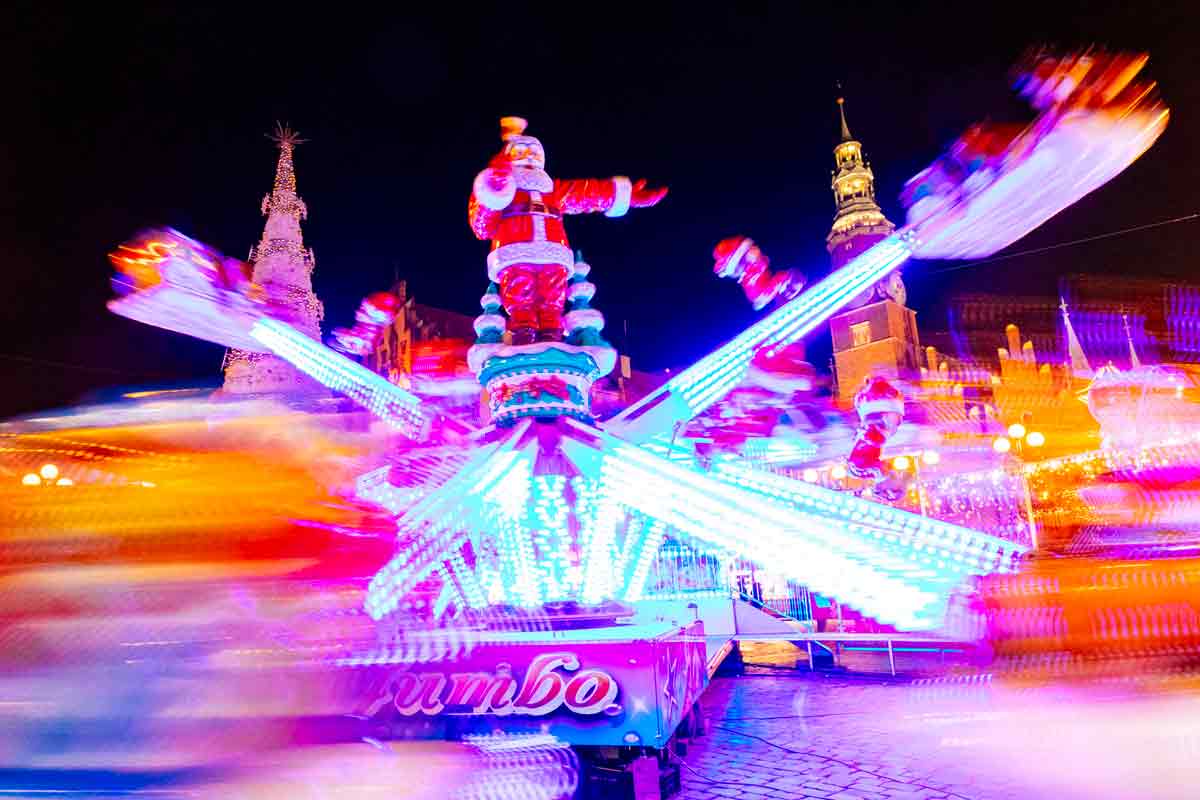 Wrocław’s Christmas Market was the largest and best we’ve seen so far in Poland.

Wrocław is located in the far western part of Poland. Over the centuries, it has been part of the original Kingdom of Poland, the Kingdom of Bohemia, the House of Hapsburg, the Kingdom of Prussia, the German Empire and Nazi Germany. In the first half of the 14th century, this city became known as Breslau. At the end of WWII, the city returned to Poland and once again became Wrocław. 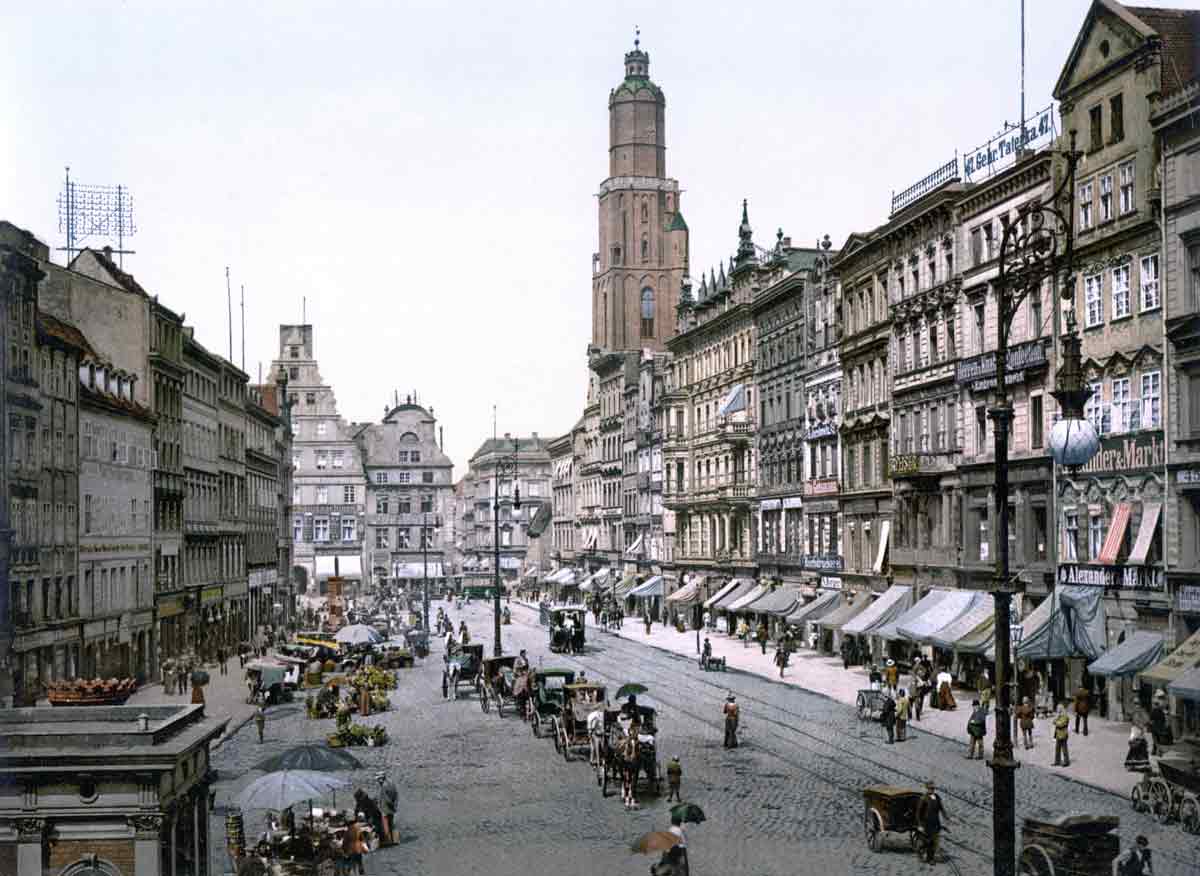 A photo of one of the sides of the main square in 1900, when the city was known as Breslau. Public Domain. Available from US Library of Congress.

How is “Wrocław” pronounced?

A quick aside before we get to the photos: how is “Wrocław” pronounced? For non-Polish speakers, like me, the spelling can be a bit confusing. It’s actually pronounced VRAWHT-swahf. The “ł” is pronounced like the English language “w.”

Wrocław was the second of three cities we visited on our week-long Christmas Market tour. It’s Old Town is quite charming and, in our opinion, the Christmas Market was clearly the best of the trip.

The Christmas Market is in the Old Town’s rynek (main square). It’s very festive and oozes with holiday spirit. This whirligig and food booths are in the shadow of the old town hall. 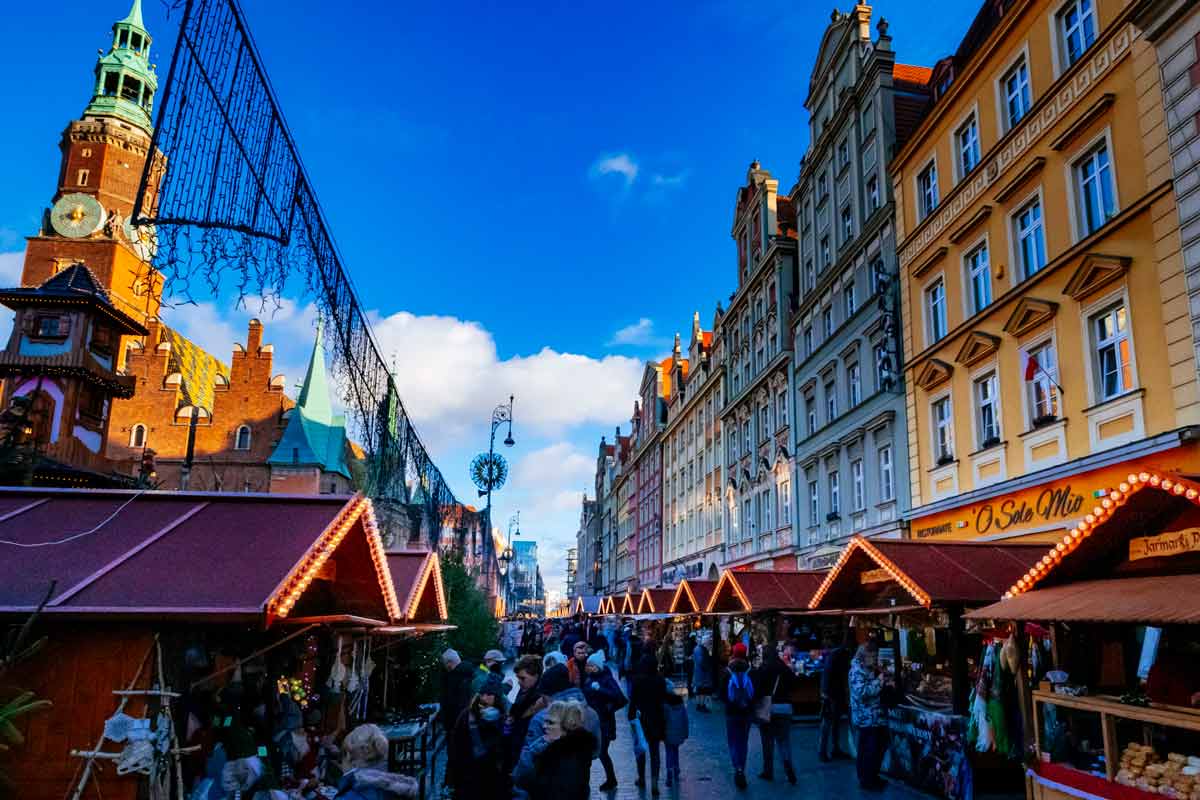 The shopping and food booths were on three sides of the rynek and also extended onto two separate side streets. The merchandise and food were very similar to those found in the other two markets. 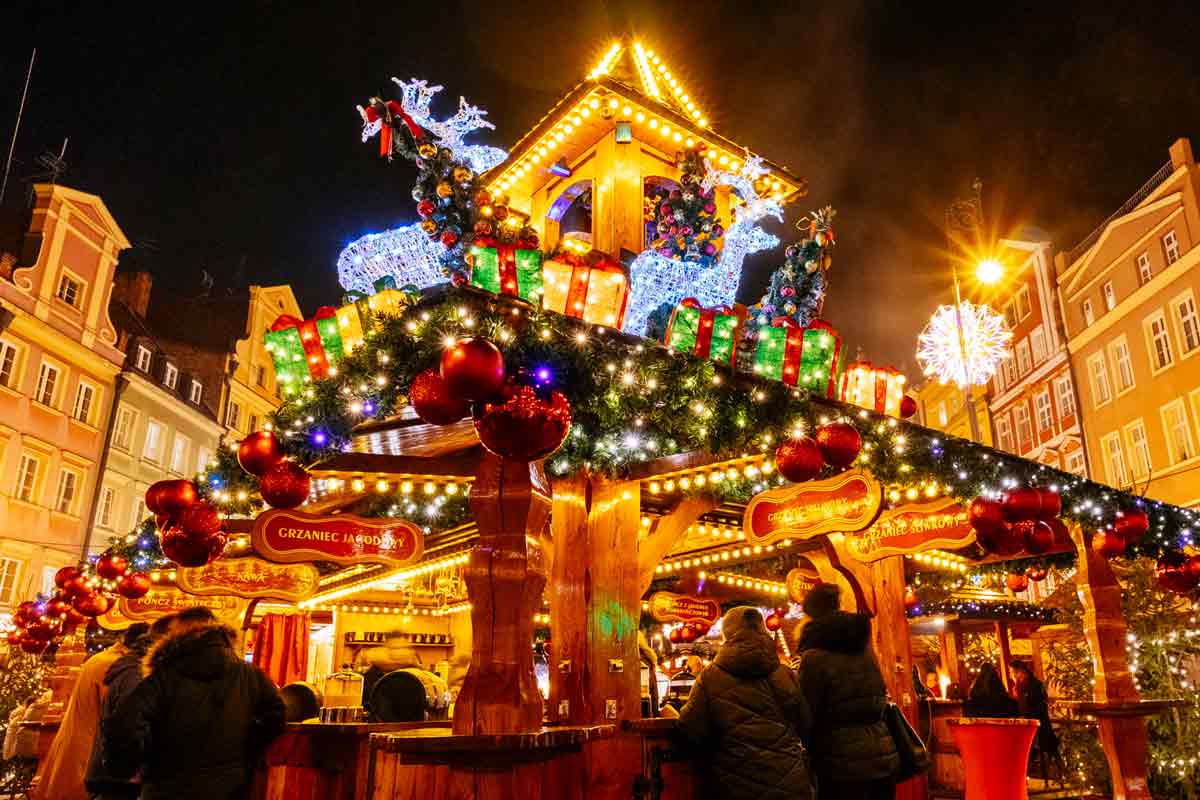 On a chilly night, Christmas lights and the aroma of mulled wine accentuate the holiday spirit. 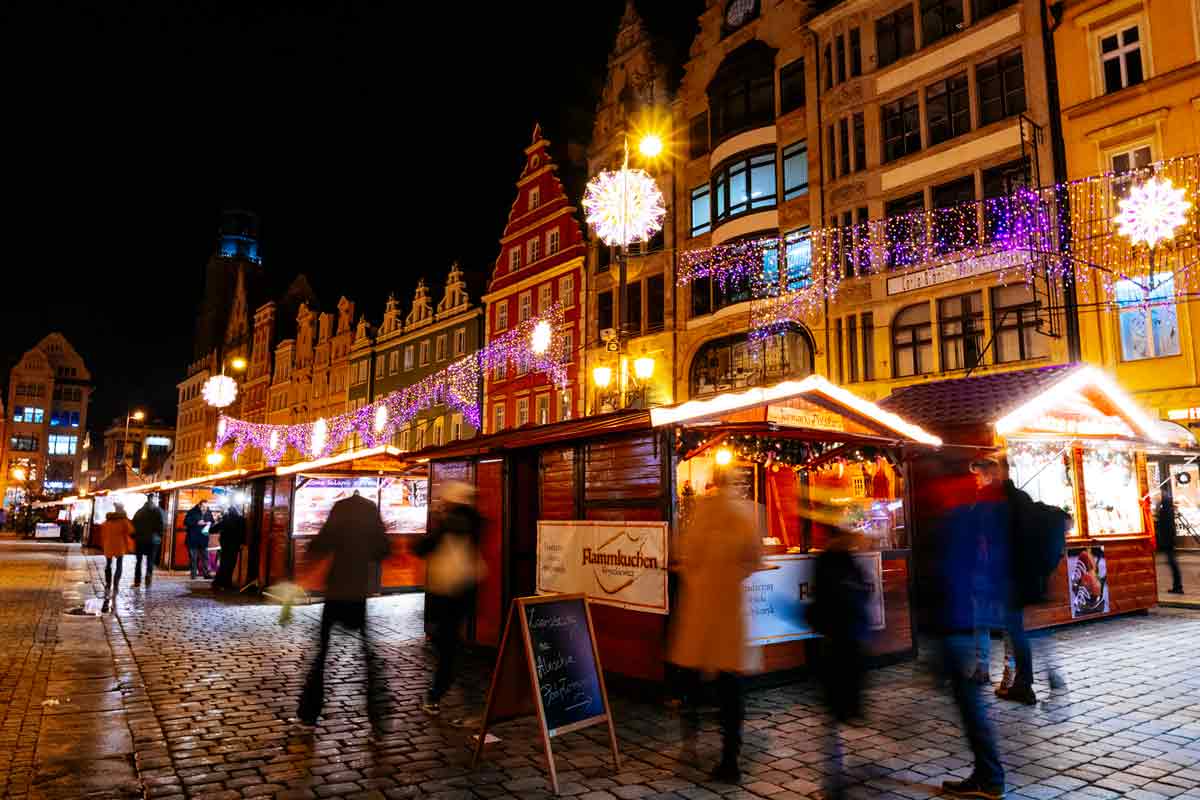 We visited midweek at the beginning of December, so the market wasn’t very crowded. 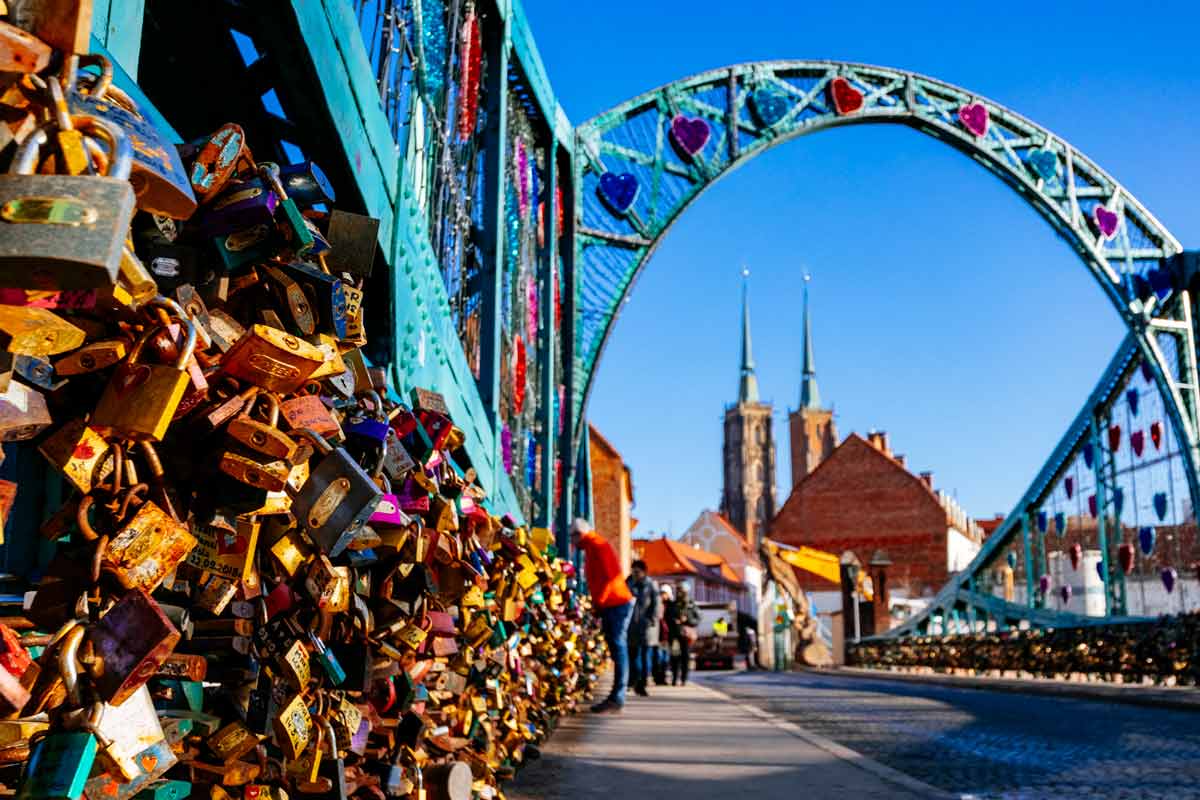 We took a guided tour during our one full day in the city. The tour took us from the Old Town to the ostrów tumski (Cathedral Island) via Cathedral Bridge. Because the bridge is covered with “love locks” ~ those padlocks couples lock on a bridge as a symbol of their love ~ it is now also known as Lovers Bridge. The Cathedral of St. John the Baptist is in the background. 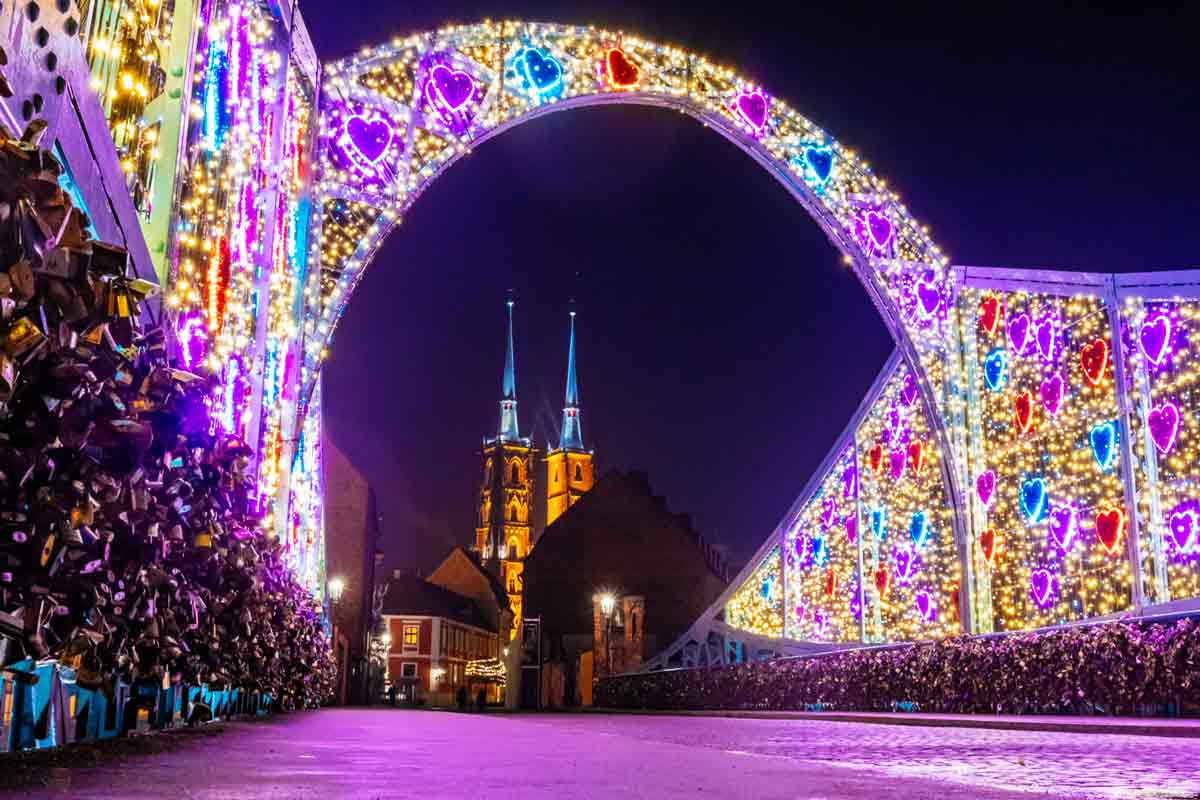 I think Lovers Bridge is more beautiful at night. 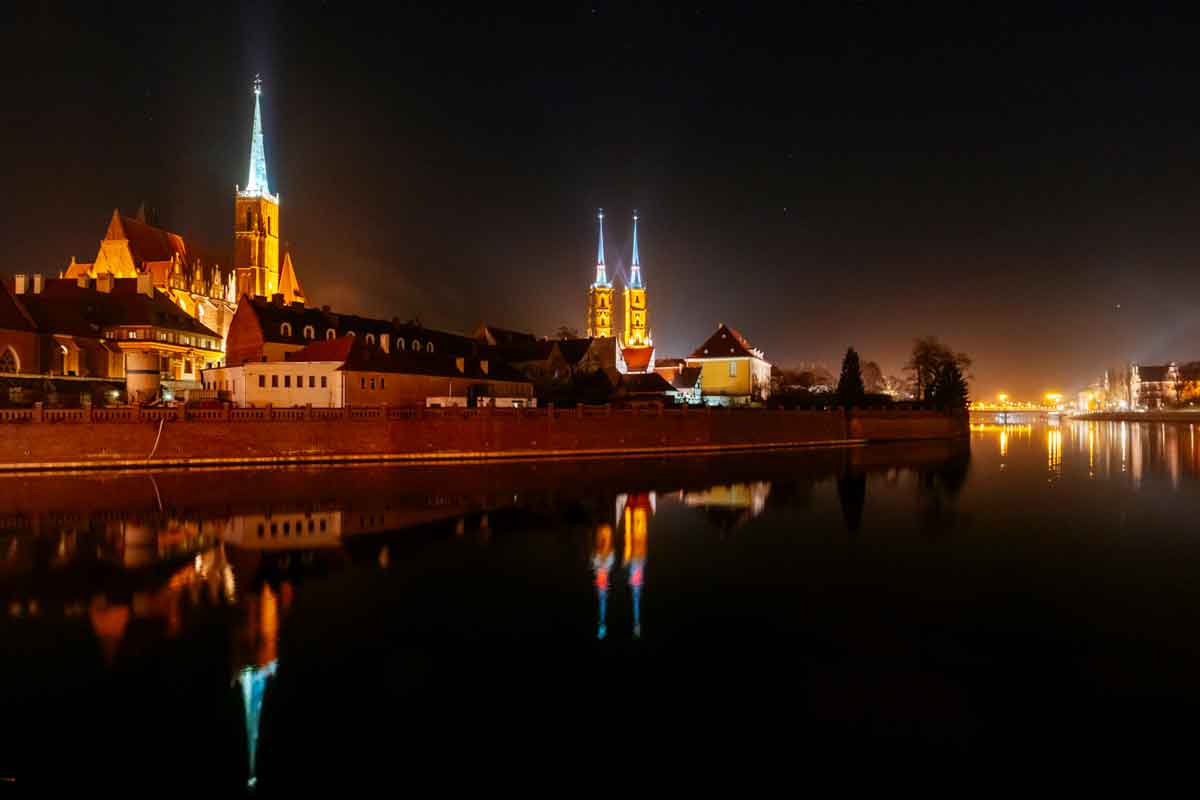 The Revolting Dwarves of Wrocław and the Orange Alternative

It’s so easy to get caught up admiring the beautiful architecture and the Christmas Market that you forget to look down. But if you don’t look down, you’ll miss the little people: the dwarves of Wrocław. 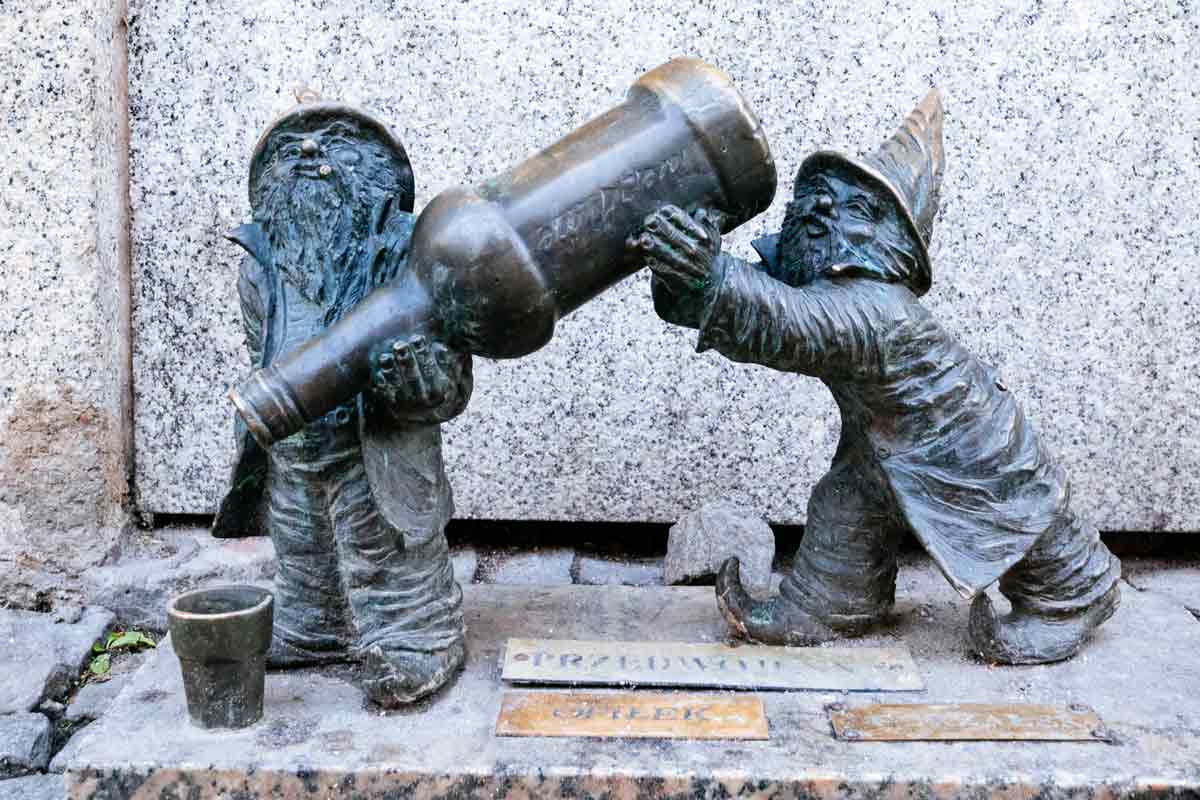 During our visit, we saw a couple dozen of the dwarves. For some reason, this pair spoke to us. 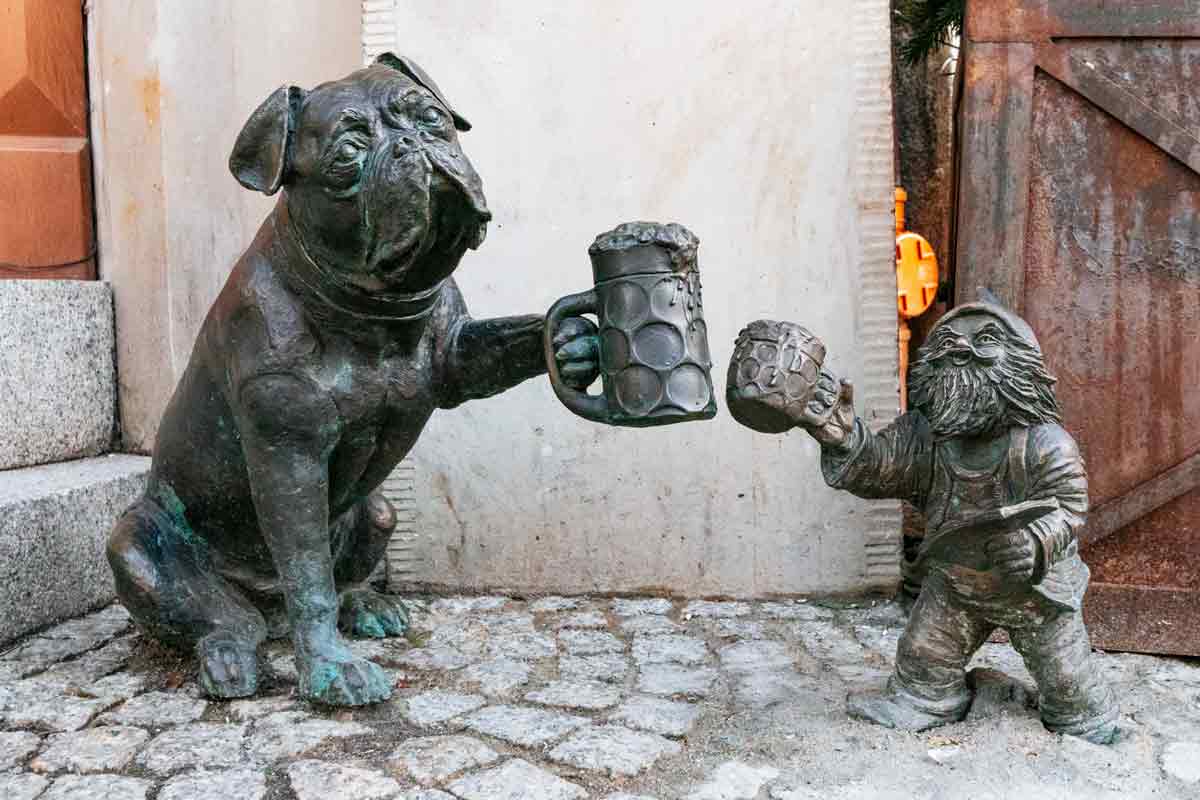 And this pair “woofed” at us.

Are the dwarves really “revolting”?

They’re fun, charming, cheeky and plentiful. But are they “revolting”? Only in the sense that they commemorate protests that helped lead to the Revolutions of 1989.

The Orange Alternative’s graffiti and dwarves were non-ideological and humorous. They used slogans such as, “There is no freedom without dwarves,” “Every militiaman is a piece of Art” and “Citizen, help the militia, beat yourself up.”

Later that decade, the Orange Alternative organized street events, such as the Revolution of Dwarves, when more than 10,000 people wearing orange dwarf hats marched through the center of Wrocław.

Commemorating the Orange Alternative with a dwarf

In 2001, the city commemorated the Orange Alternative’s resistance efforts by installing a bronze dwarf, fashioned after the movement’s original dwarf symbol, near the rynek. In 2005, a local sculptor proposed creating more dwarves, each representing a single part of Wrocław’s history or daily life. Today, there are over 400 dwarves.

It is possible to design and install new dwarves. But in order to make a new dwarf that honors the resistance to the past government, you have to get permission from the current government.

Celebrating the dwarves with a map and a festival

Today, the dwarves are a major tourist attraction and it’s easy to see why these cheeky little folks are so popular. For the DIYer, there is a map showing all the locations of the dwarves. Or, for the more crowd-oriented, in September there is the Wrocław Dwarf Festival. 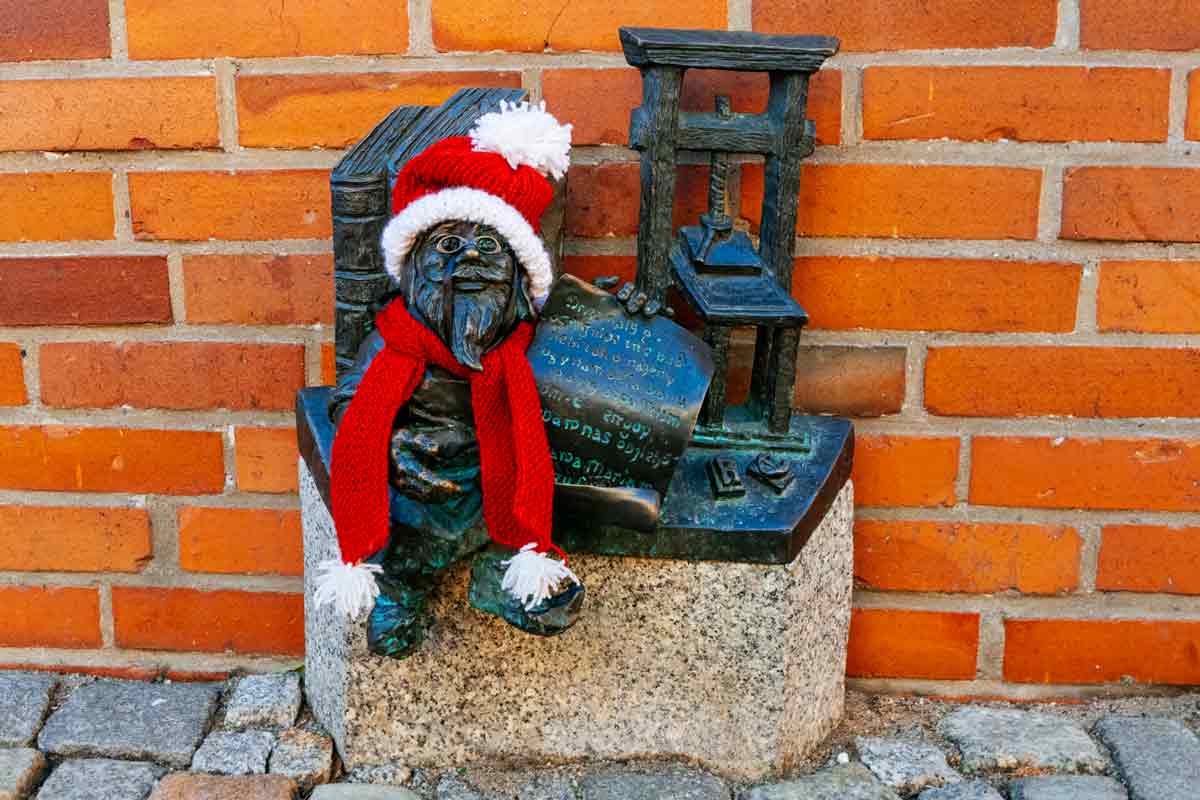 This dwarf clearly has holiday spirit. 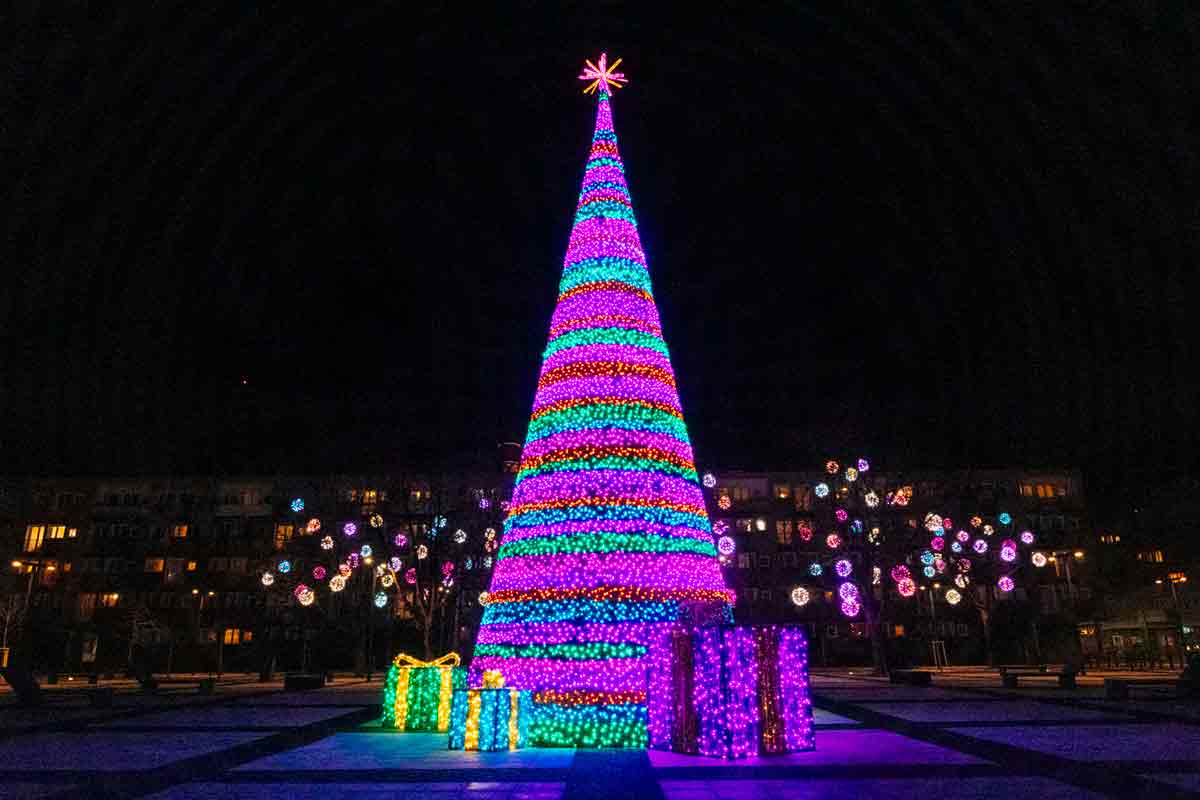 We discovered this festive tree while wandering around the city on the second, and final, night of our visit.

I guess we’ll just have to go back again.