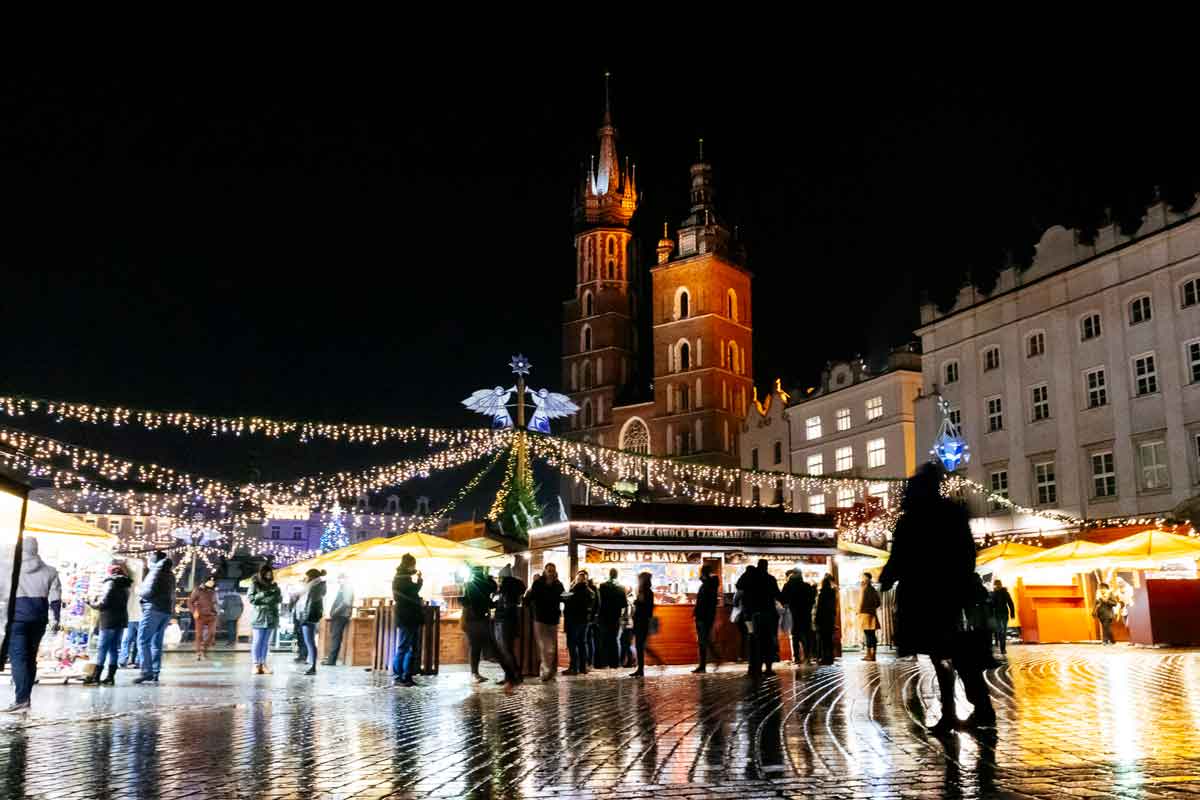 The Christmas Market is in front of St. Mary’s Basilica in the rynek głowny (town square) of Kraków’s Old Town.

Kraków. Poland’s second largest city is also one of its oldest. Dating back to at least the 7th century, Kraków is overflowing with history. Once the capital of Poland, today, Kraków is probably best known for its former archbishop, Karol Wojtyła (a.k.a. Pope John Paul II). 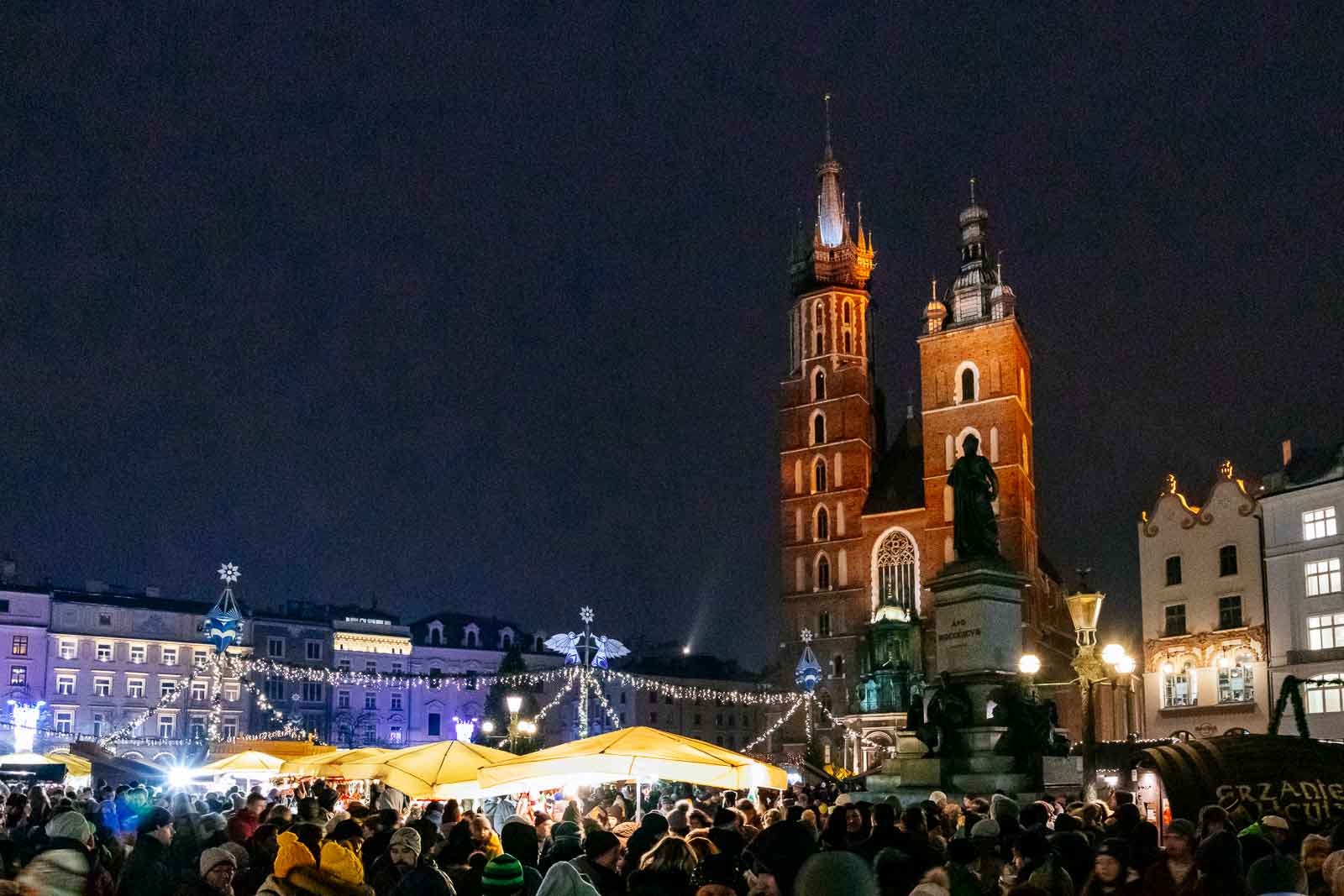 We arrived just after 3:30 on a Saturday afternoon. The sun had set, the snow was falling gently and the Christmas Market was packed. 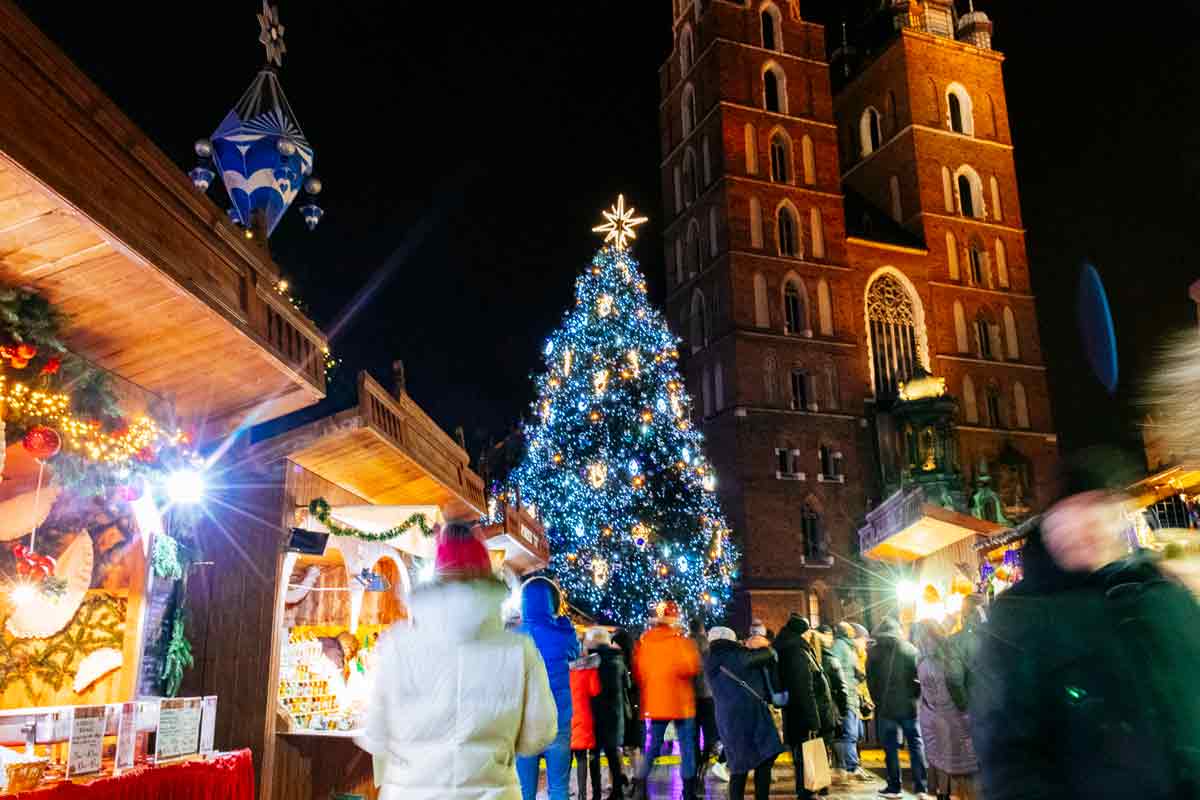 The Christmas tree seemed a bit undersized next to St. Mary’s Basilica. This brick Gothic Church dates from 1347 and sits on the foundations of an earlier basilica from about 1220. 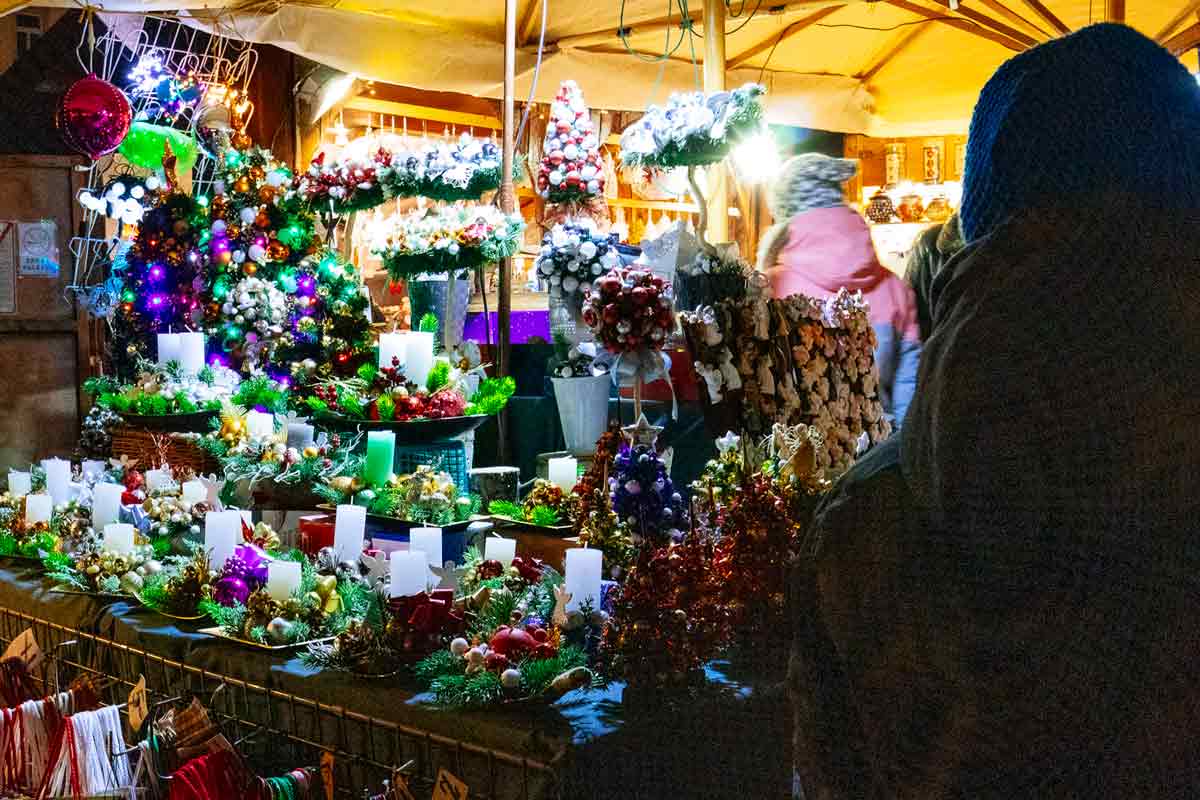 Souvenirs, handbags, candles, jewelry, scarfs and Christmas decorations are some of the things available at the market. 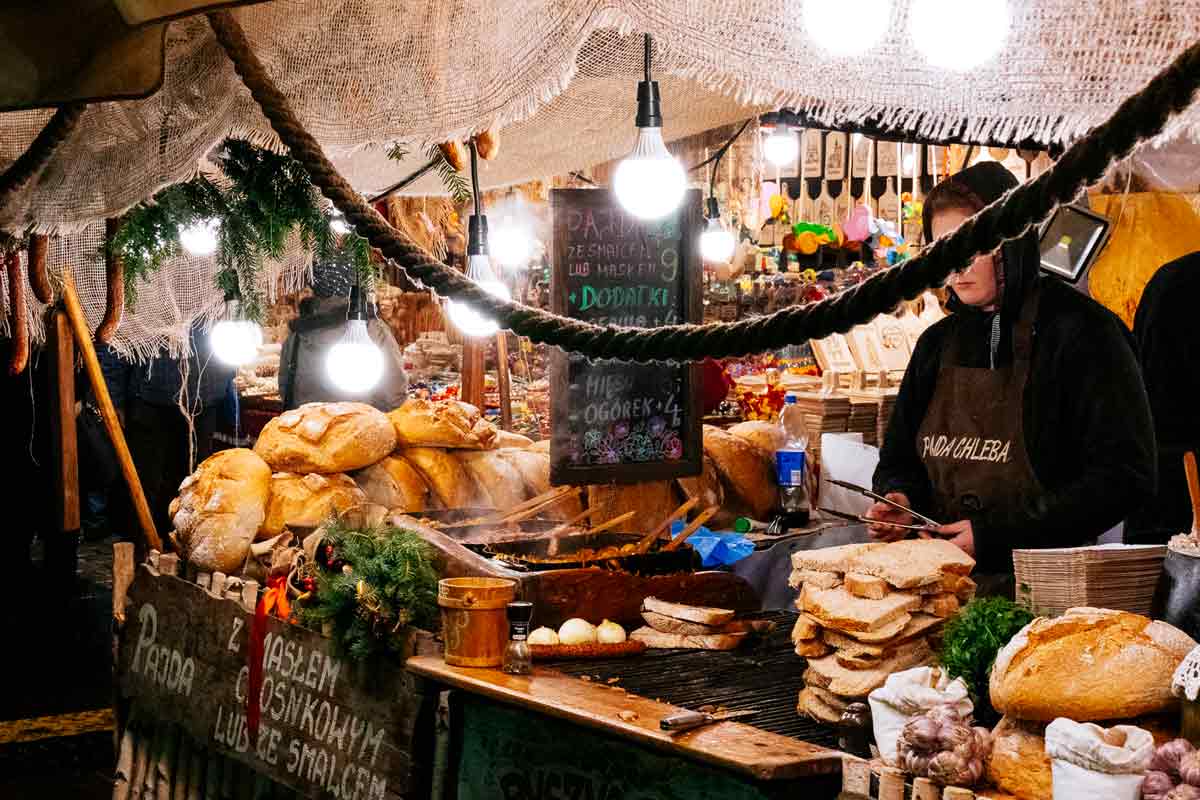 No one will ever starve at Kraków’s Christmas Market. There’s delicious bread … 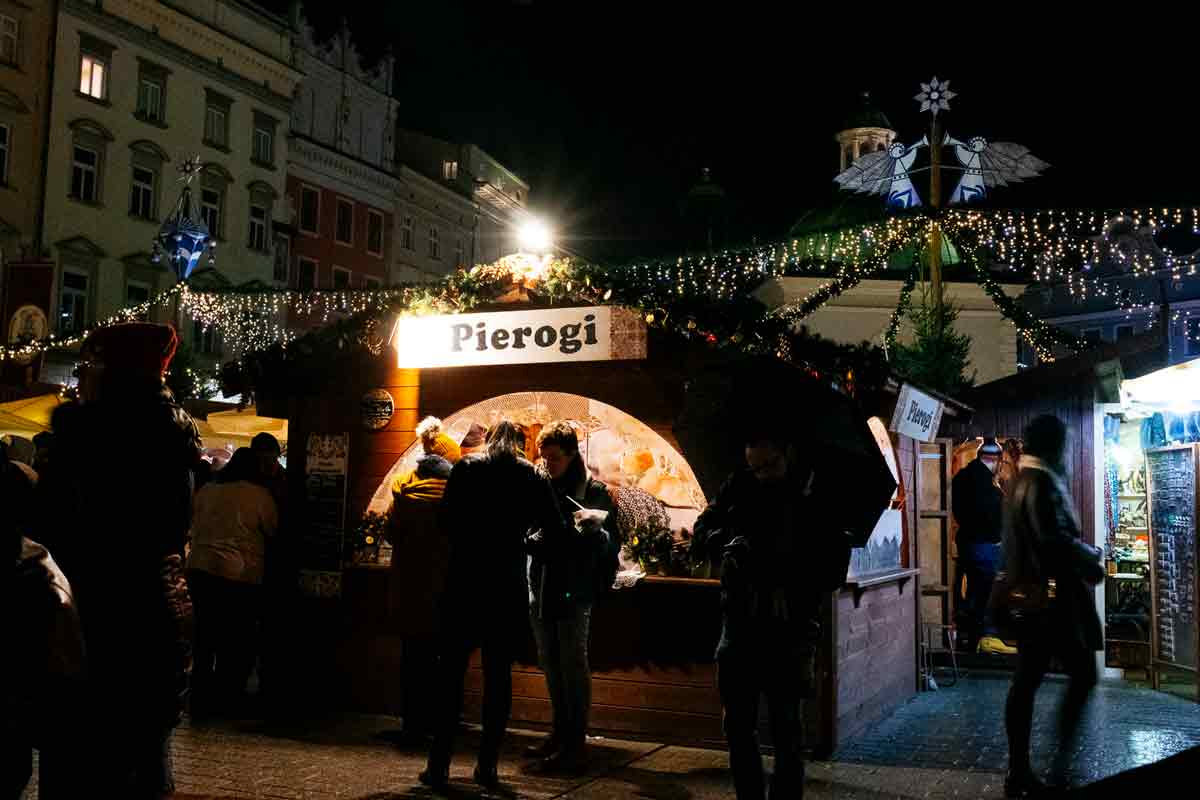 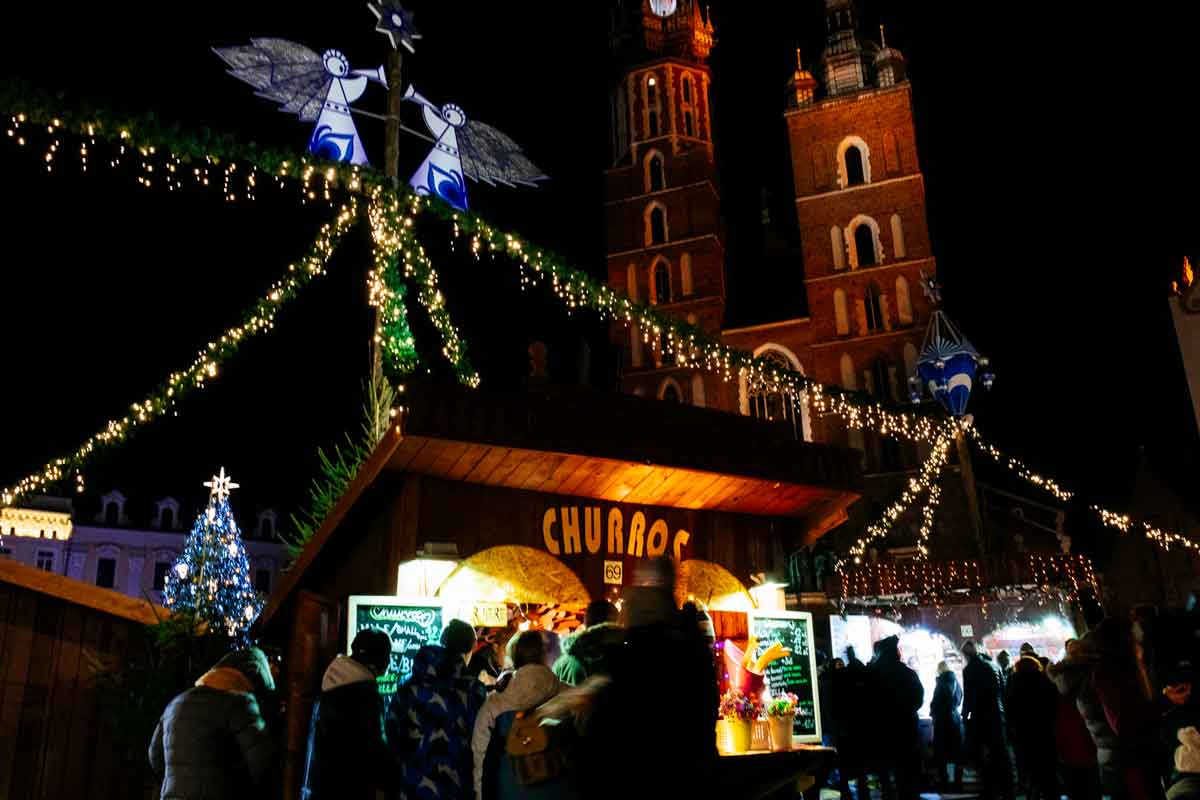 … and churros as well as grilled meats, beer and mulled wine. 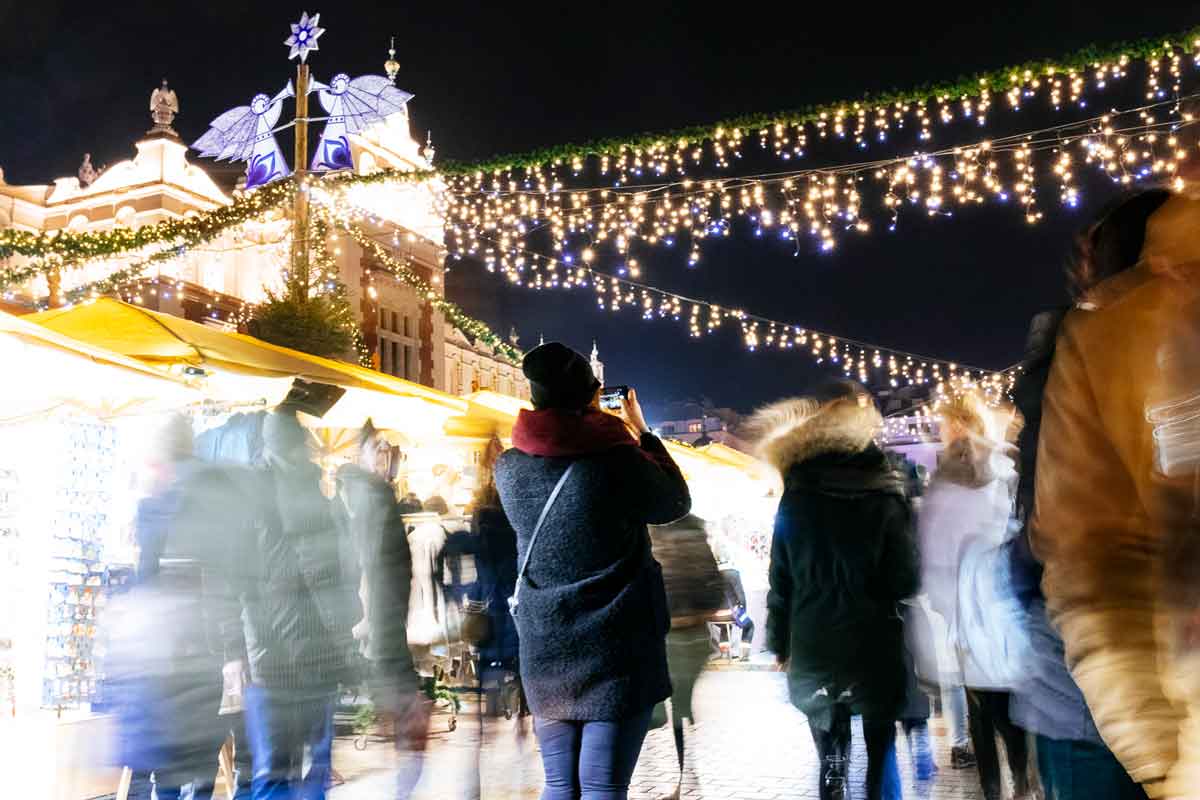 Snapping photos of the beautiful Christmas decorations. I understand completely. 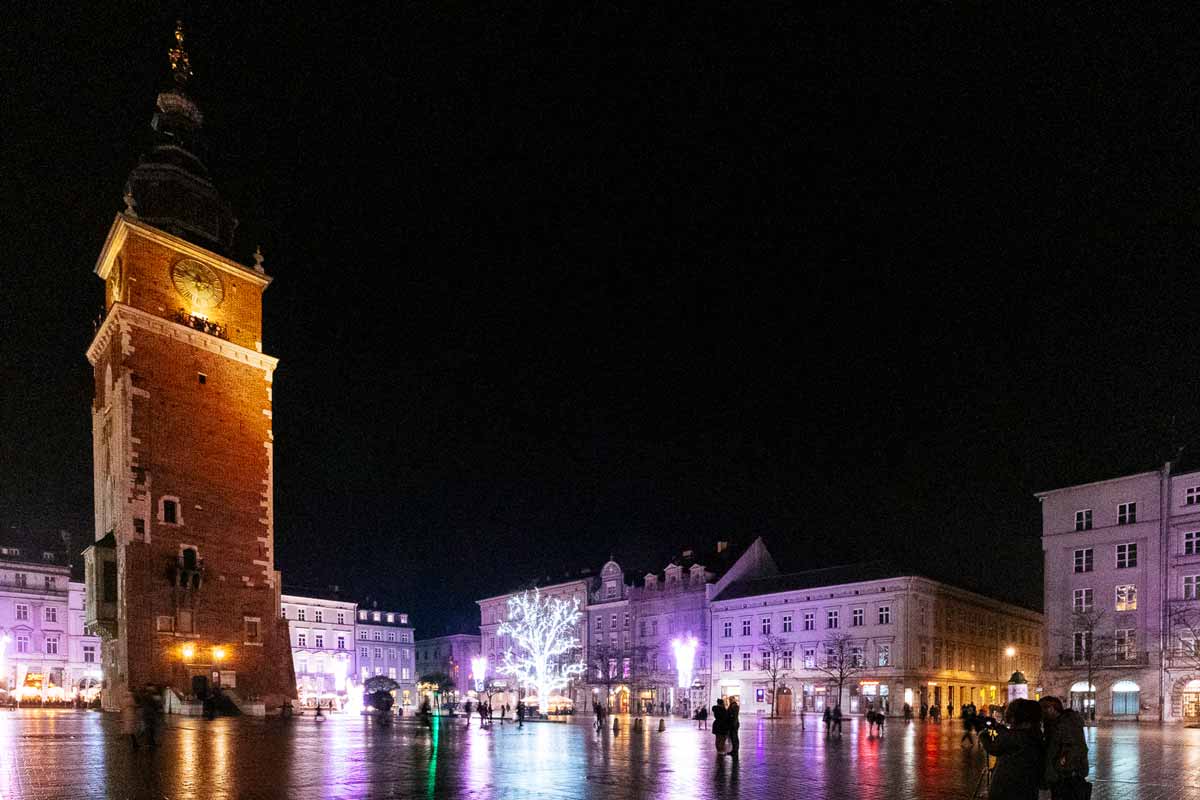 Kraków’s rynek is one of the largest in Poland. The Christmas Market is in the corner by St. Mary’s Basilica and the Town Hall Tower, shown here, is at the diagonal corner. There is some distortion in this photo due to the wide-angle lens I used. 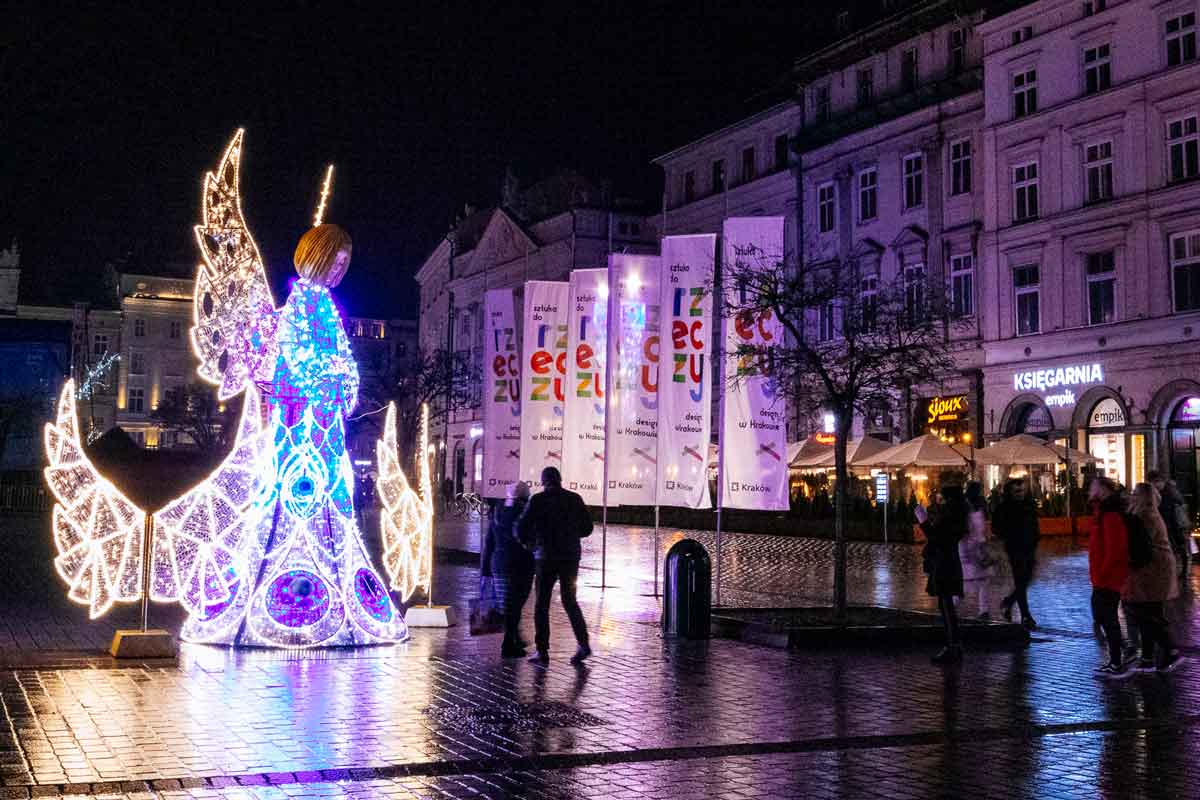 This delightful angel was on display by the Town Hall Tower. Her body was made of mesh and decorated with lights. In contrast, her head was made of wood and not illuminated. 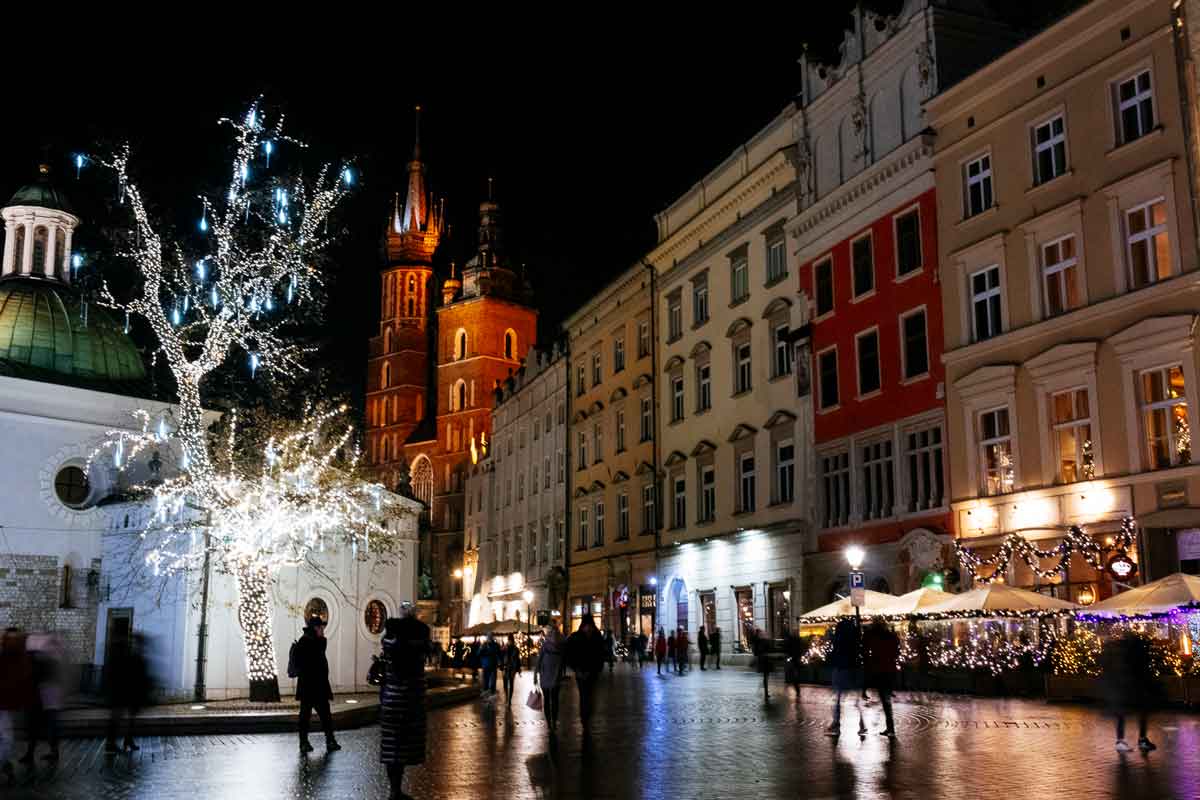 Kraków’s rynek is very large. The Christmas Market occupies the corner by the basilica and the restaurants lining the square illuminate the rest of the square. 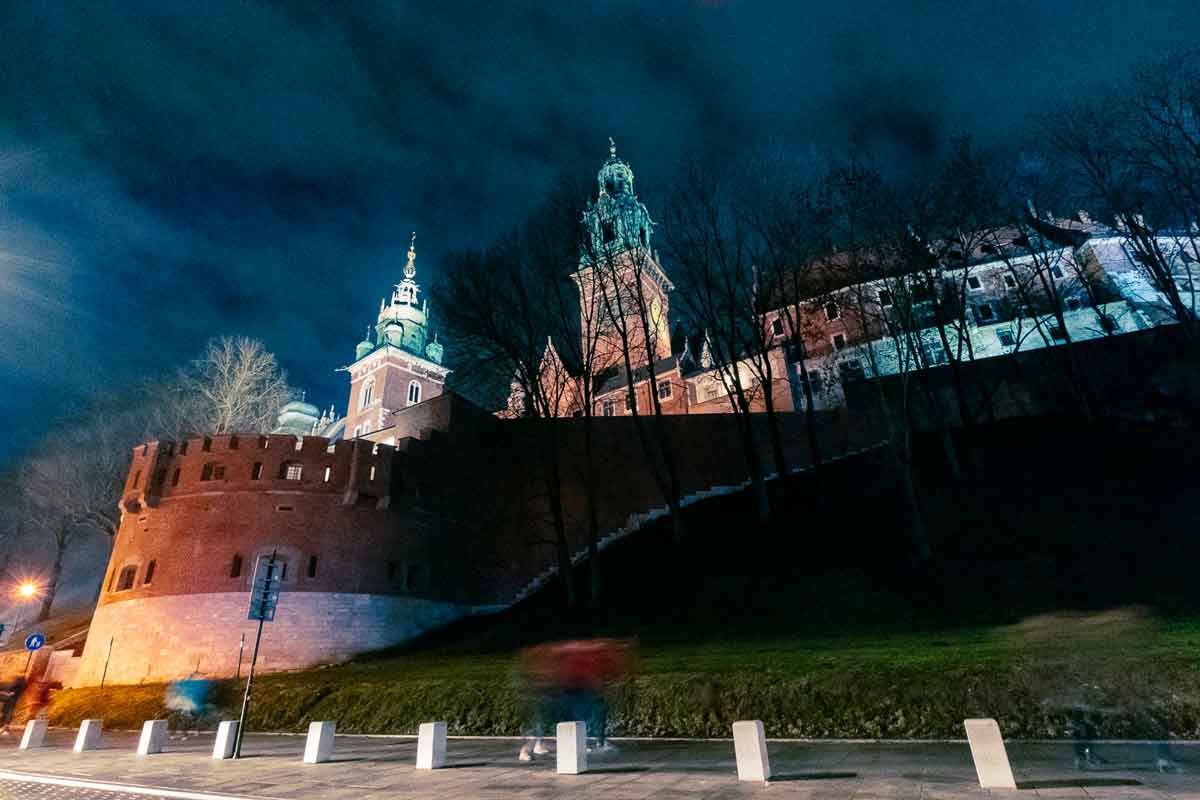 Wawel Castle sits on a hill next to the Vistula River outside of the Old Town. Humans have lived on this hill since Paleolithic times. Polish rulers built a castle here in the 13th and 14th centuries. 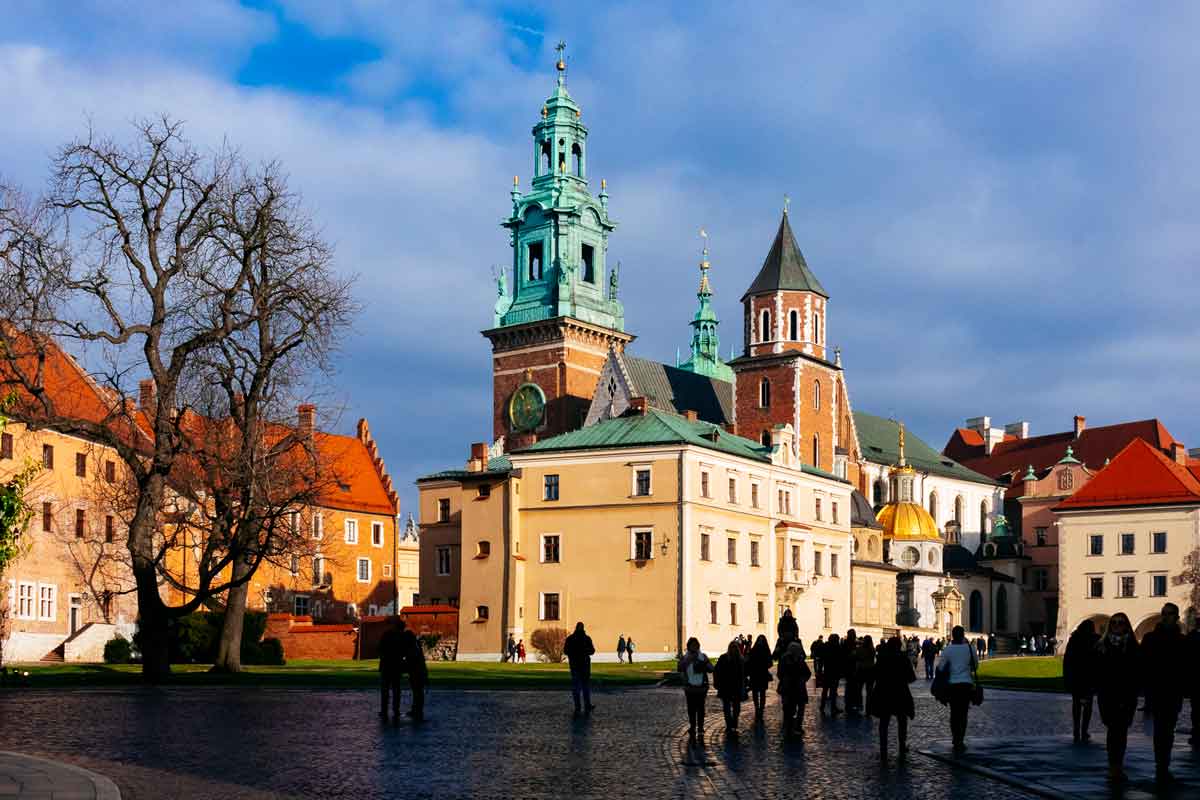 It was bright and sunny the morning we visited Wavel Castle. Italian architects, sculptors, and German decorators converted the castle into a Renaissance palace in the 16th century. Today, it’s a museum that is regarded as the most culturally and historically significant site in Poland. 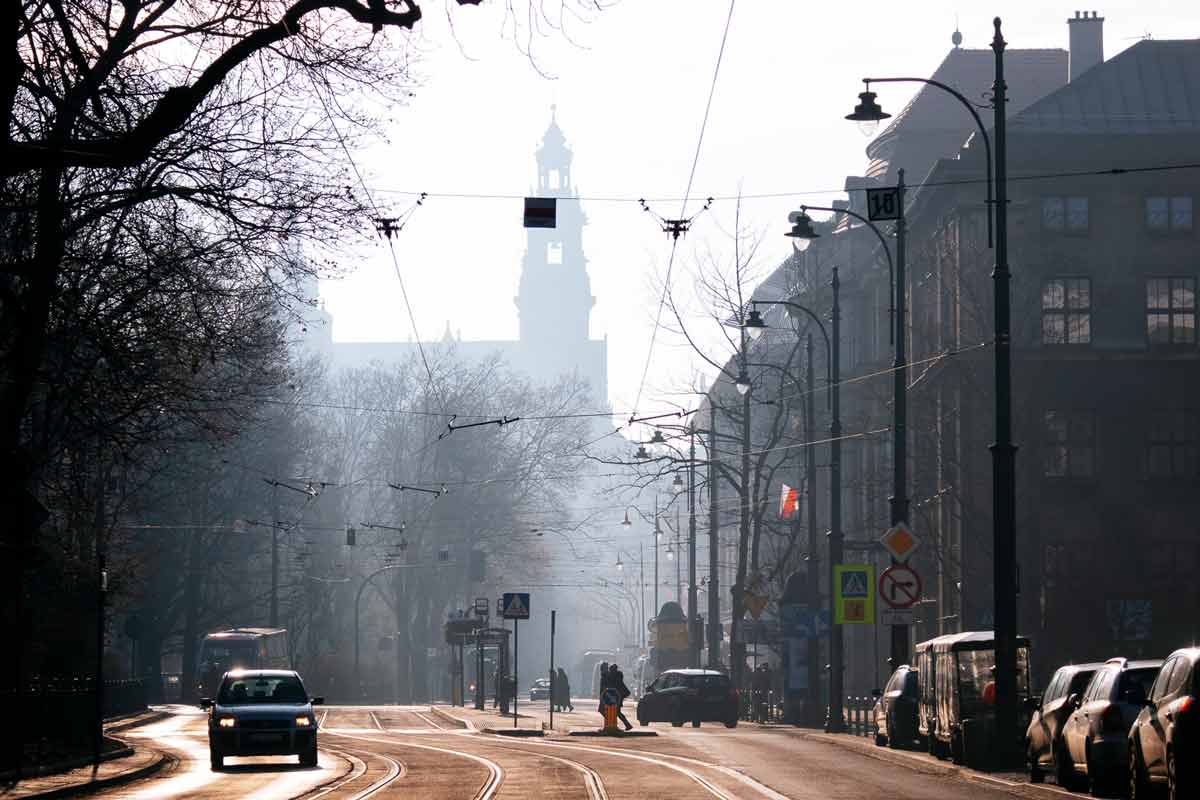 Wawel Castle can be seen from many parts of the city. 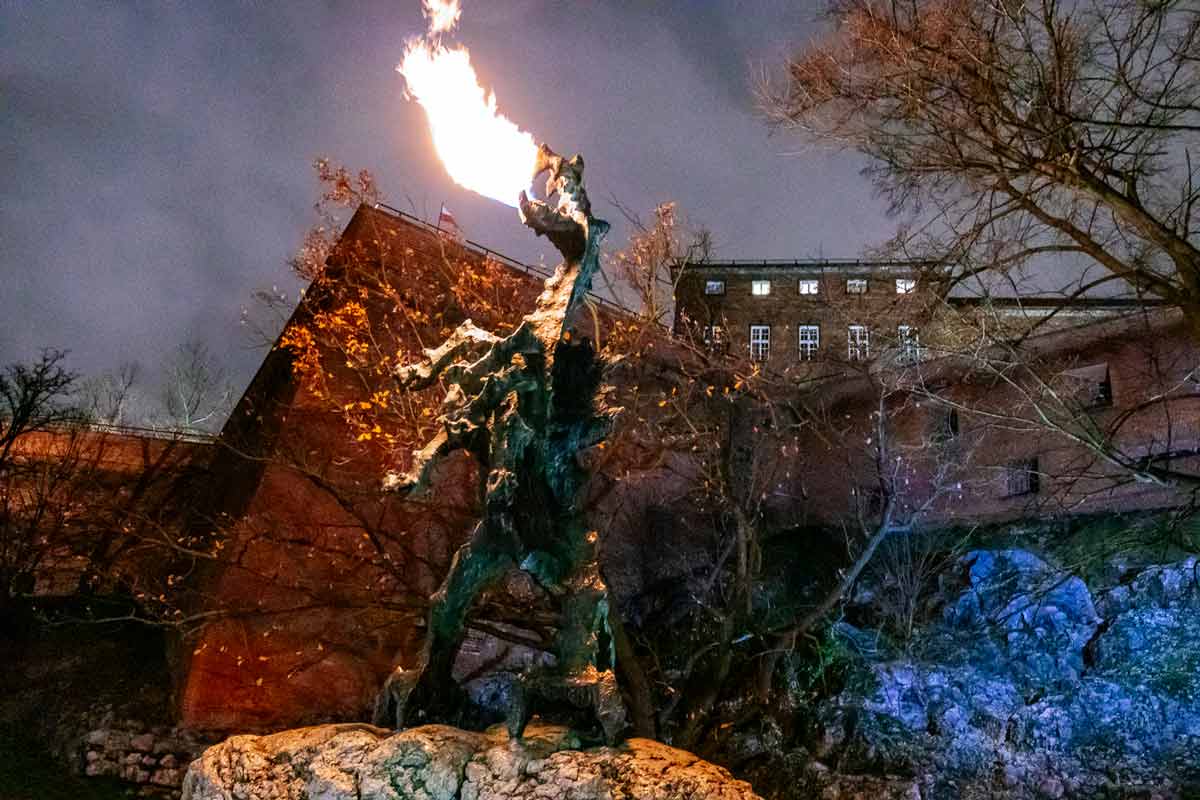 According to Polish legends, the Wawel Dragon lived in a cave at the foot of Wawel Hill on the banks of the Vistula, destroying houses and eating young women. Desperate to stop the dragon, King Krakus promised his daughter, Wanda, to any man who defeated the dragon. Skuba, a cobbler, stuffed a lamb with sulfur and left it near the dragon’s cave. The dragon devoured the lamb and soon after became unbearably thirsty. Trying to quench its thirst, the dragon drank so much from the Vistula that it exploded. Skuba and Wanda then wed. The legend doesn’t say if they “lived happily ever after” or not. This statue uses natural gas for fuel. The flaming breath occurs naturally every 5~ish minutes, or it can be triggered by a text message. 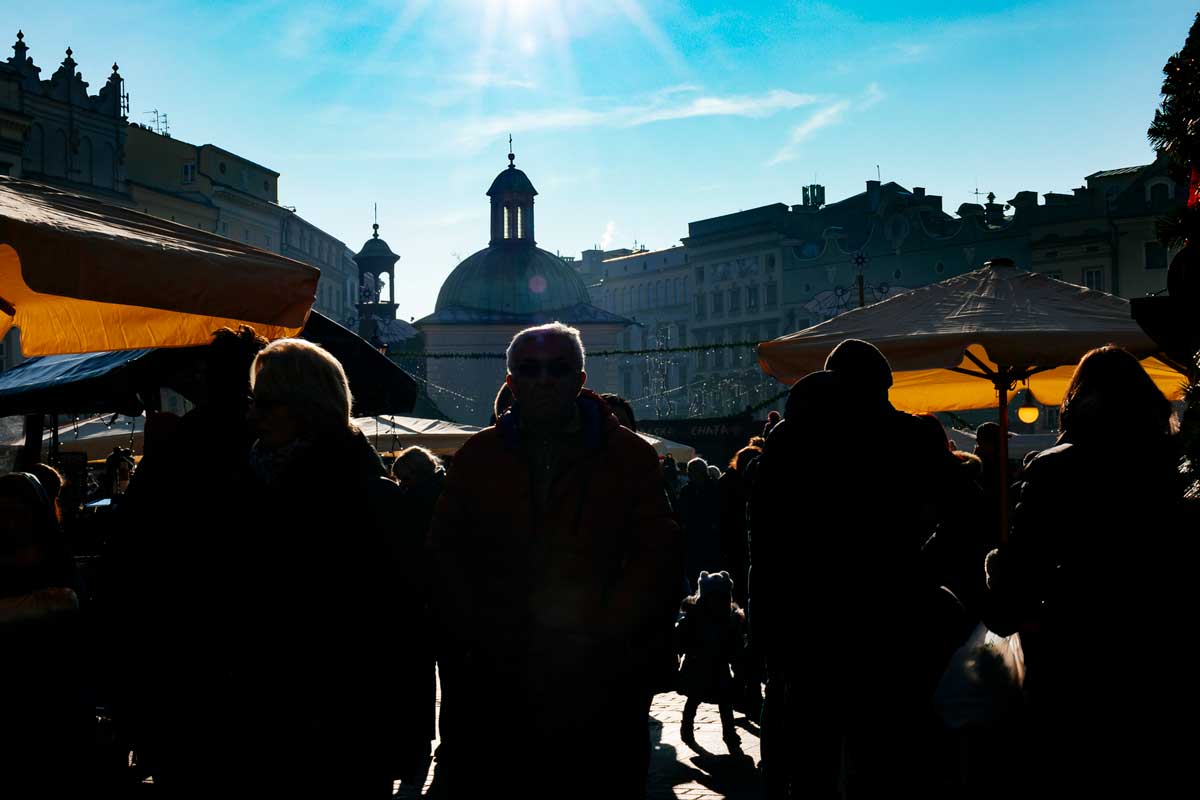 In December, the days are short and the nights are long. When it’s sunny, the shadows are also long.

One of our favorite things to do when visiting a new city is to take a food tour. We always choose a tour that’s led by a local. This time we booked with Delicious Kraków Food Tour. Our guides (and company owners) were Kamila and George. Kamila is Polish and George is from Turkey. They met while studying in Estonia. Our tour group consisted of seven from Great Britain, a gentleman from Seattle and us. We met up around 1 o’clock just down the hill from Wawel Castle. 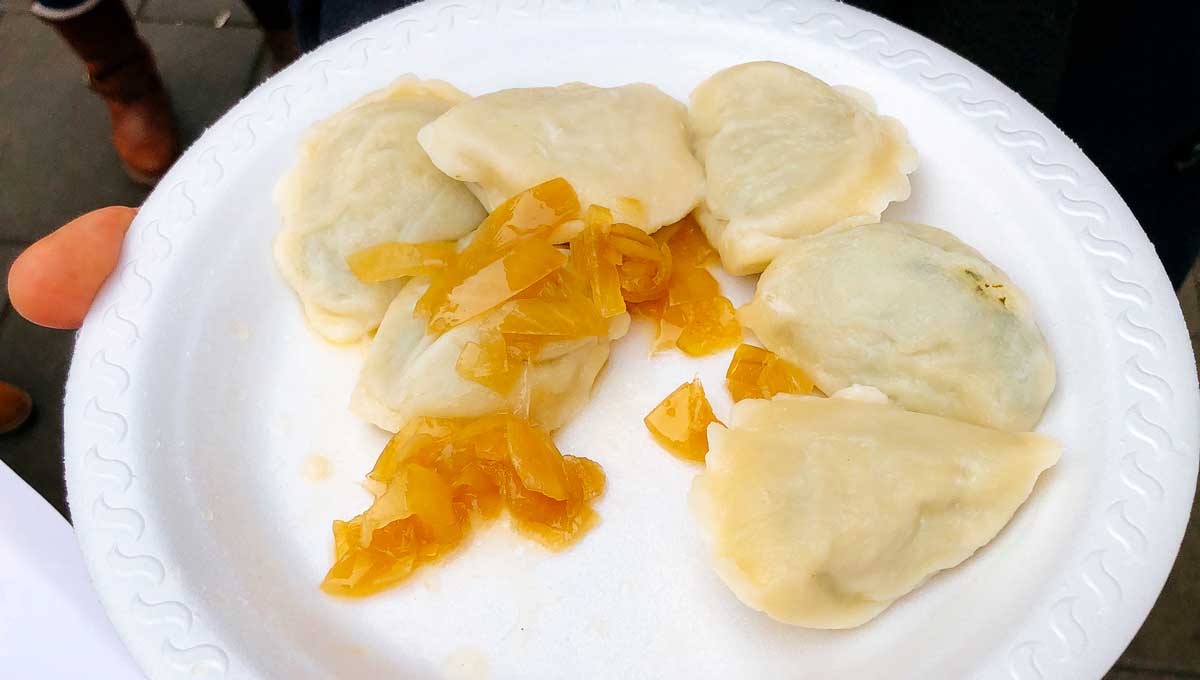 We began our food tour at a pierogi shop that was so small we had to eat outside on the sidewalk. We had four different pierogi: with spinach and quark, with potato and sauerkraut, with mushrooms, and finally filled with sweetened, spiced quark then topped with sweet sour cream. The thin and tender dough was stuffed with the fillings. They were delicious. The restaurant clearly deserved its reputation for having the best pierogi in Kraków. 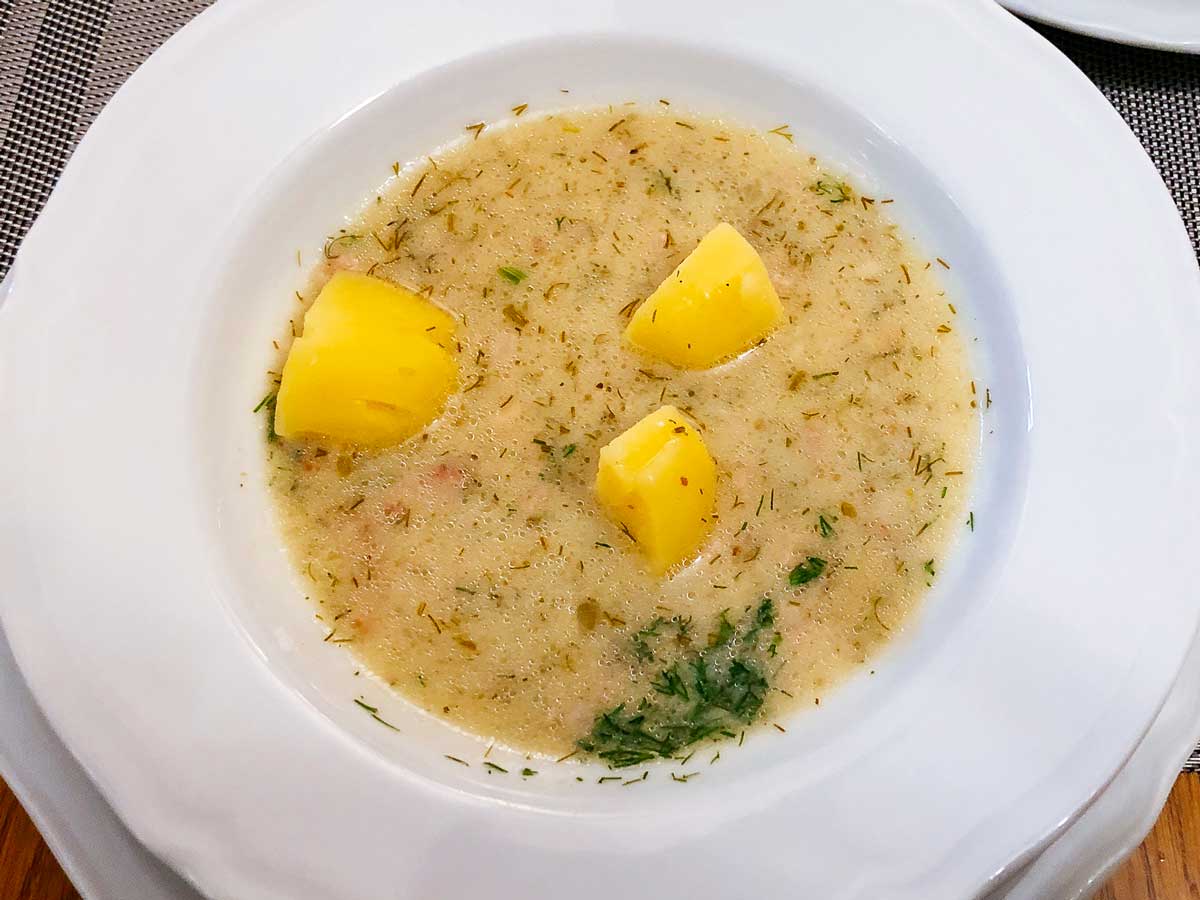 At the next stop we had two soups. The first was a lighter take on żurek. Made from a rye base, this soup didn’t have sausage and egg normally found in żurek, but had ham, lots of dill and big chunks of potato. This soup is traditional for Easter. 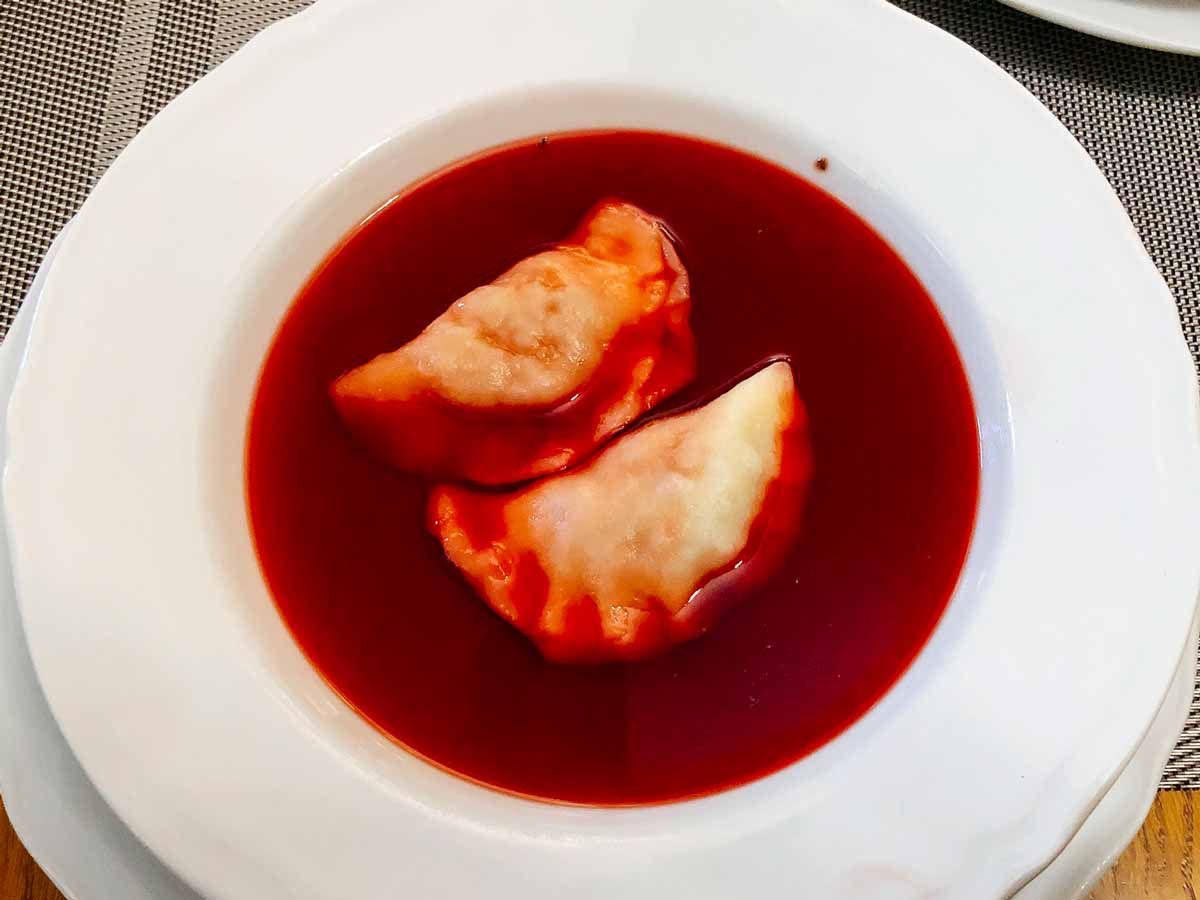 The second soup was a clear barszcz with two pork-filled pierogi. This special version of barszcz is traditionally only eaten on Christmas Eve. 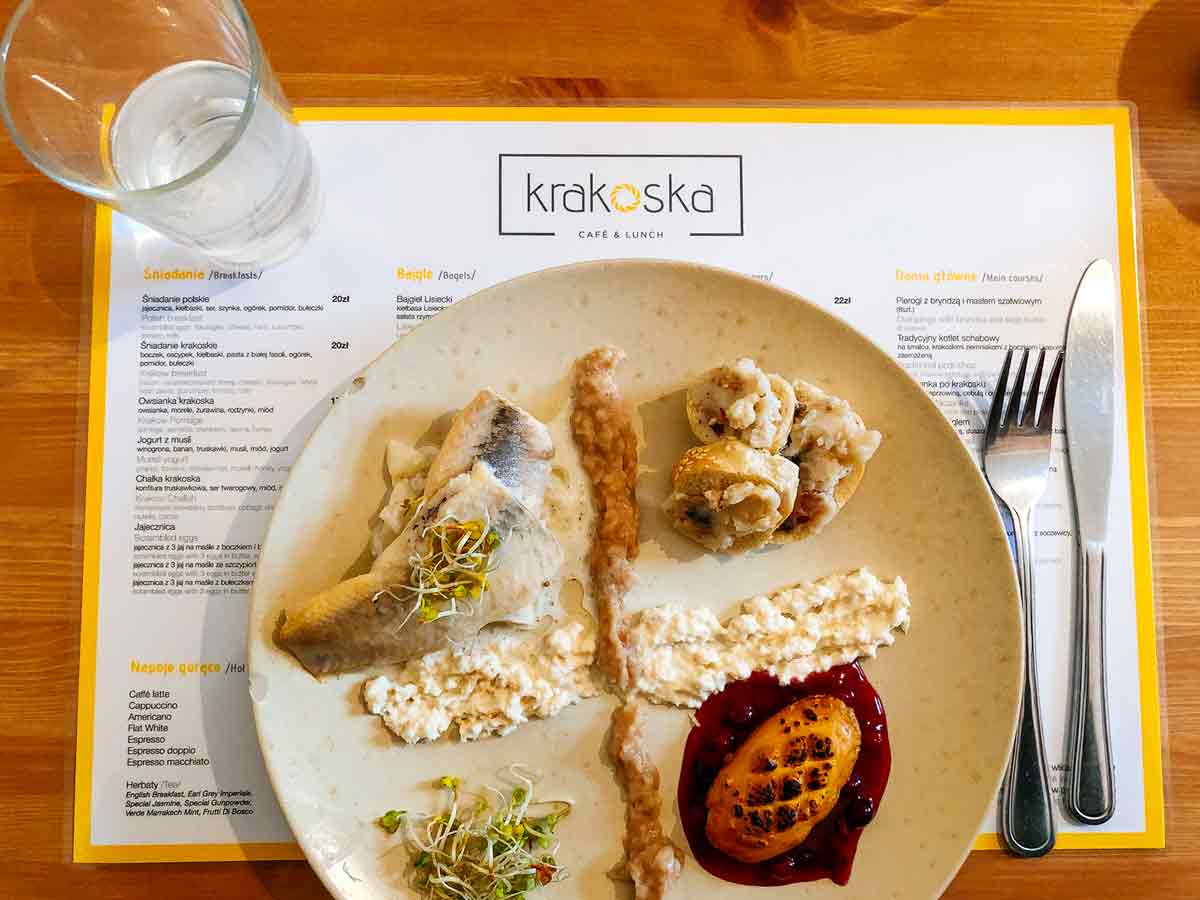 Then on to Krakoska Restaurant for the fish course: pickled herring with horseradish sauce, bean paste, and bagel topped with cherry-flavored seasoned lard. We washed this down with Żubrowka vodka, drinking it the Polish way: one shot in one swallow, savoring the cinnamon aftertaste. That was followed by a shot of fruit-infused, sweetened vodka. Ours was cherry flavored. We were allowed to sip this one. 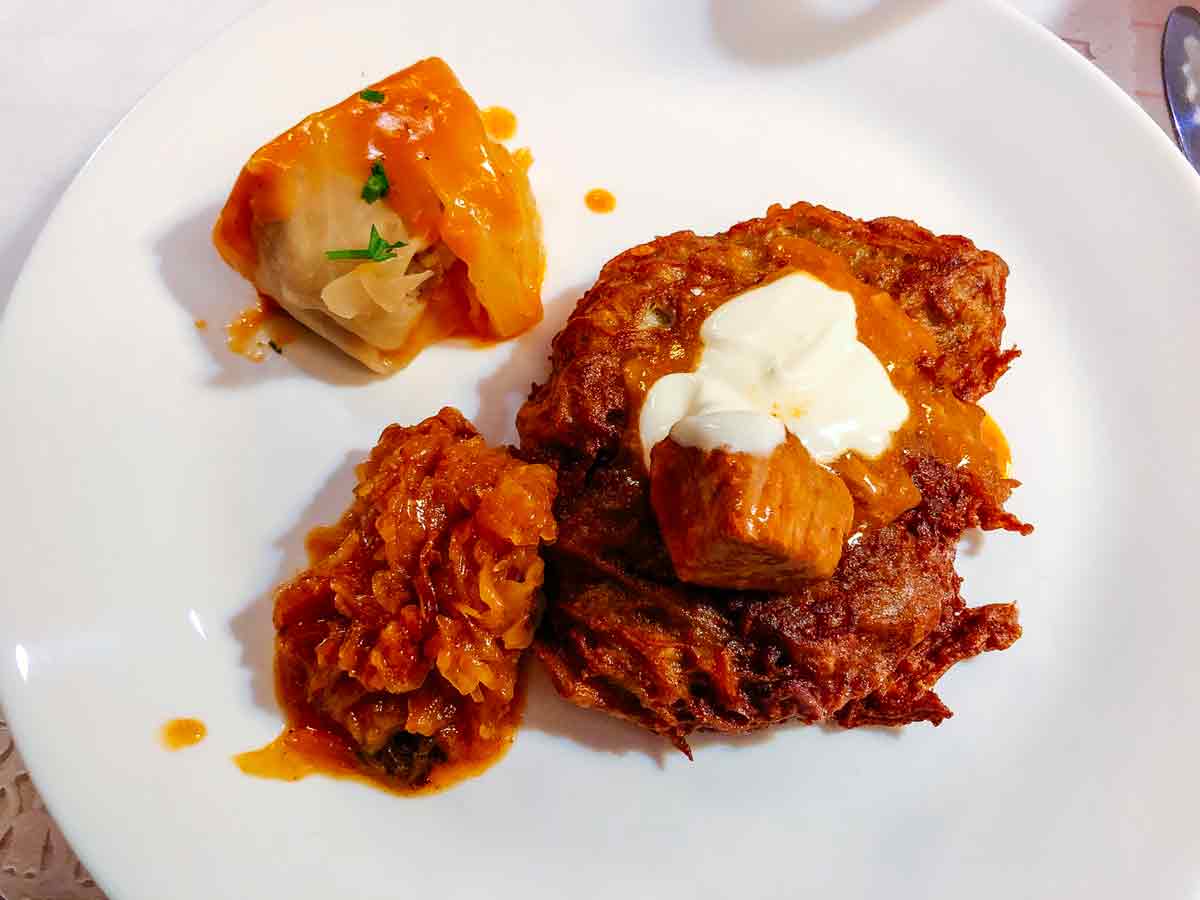 Next stop: the three-dish main course and dessert. The first dish was “little pigeons,” which are cabbage rolls stuffed with seasoned pork and rice topped with a very fine tomato sauce. The second, crispy fried potato pancakes topped with stroganoff and sour cream. Finally, bygos, which is a stew of cabbage and other veggies with meat. Bygos is called “leftover stew” because it can be made with whatever is on hand. 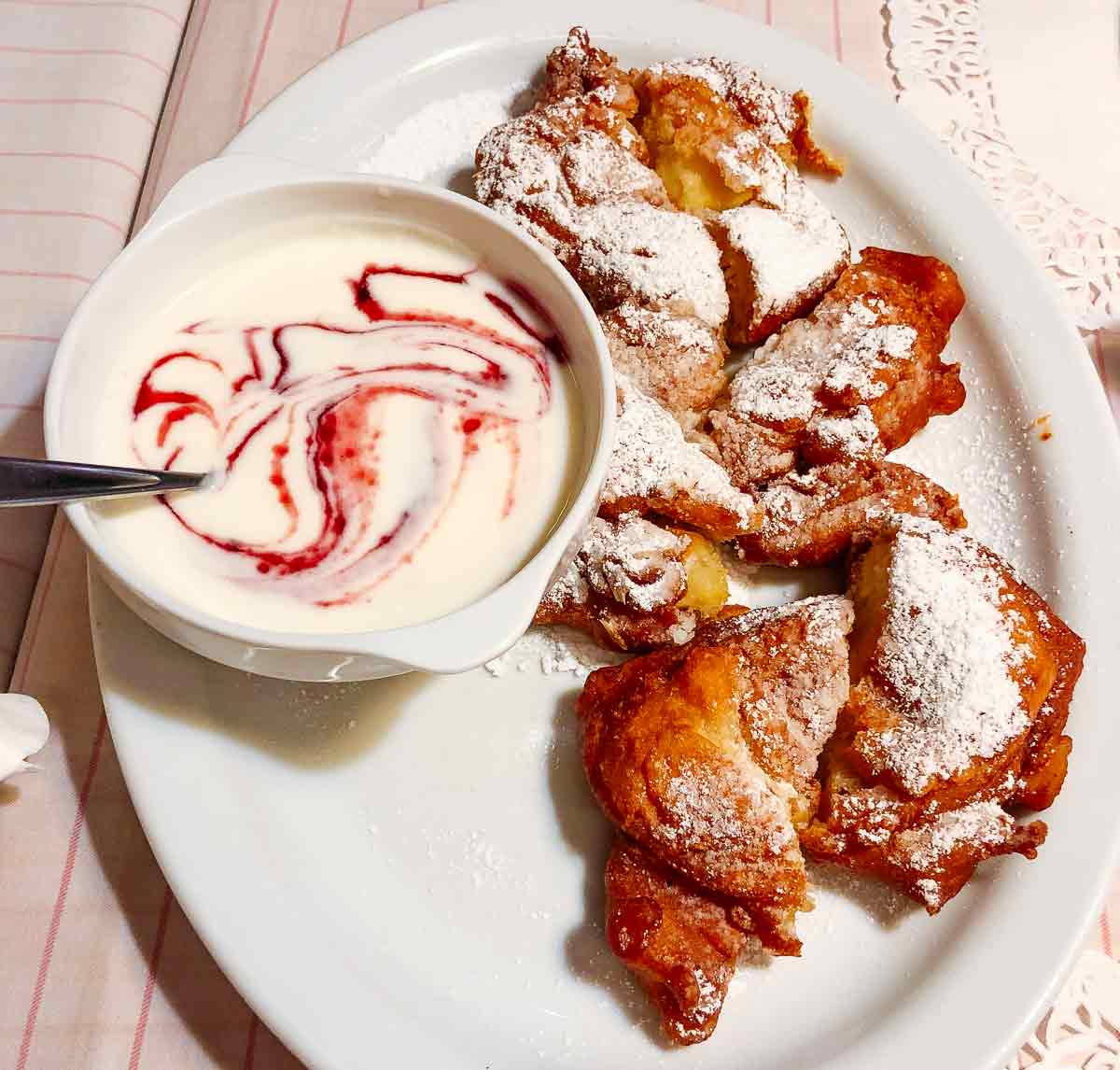 Dessert was an apple fritter topped with berry cream for dessert.

The food tour ended at the craft brewery Ursa Mairo. Over two different brews, a Belgian strong ale and an IPA, we talked about Polish drinking traditions (beer for everyday life, vodka and lots of fatty food for celebrations), where to have dinner that evening and our favorite thing about Kraków (so far).

We couldn’t decide if our favorite thing was the Christmas Market or the pierogi from this tour.

Our three days in Kraków gave us a taste of what this city has to offer. Great food, some of the best hot chocolate we’ve ever had, architecture, history and art. We look forward to returning some summer. And you, dear reader, if you get the chance, visit Kraków. You won’t be disappointed.