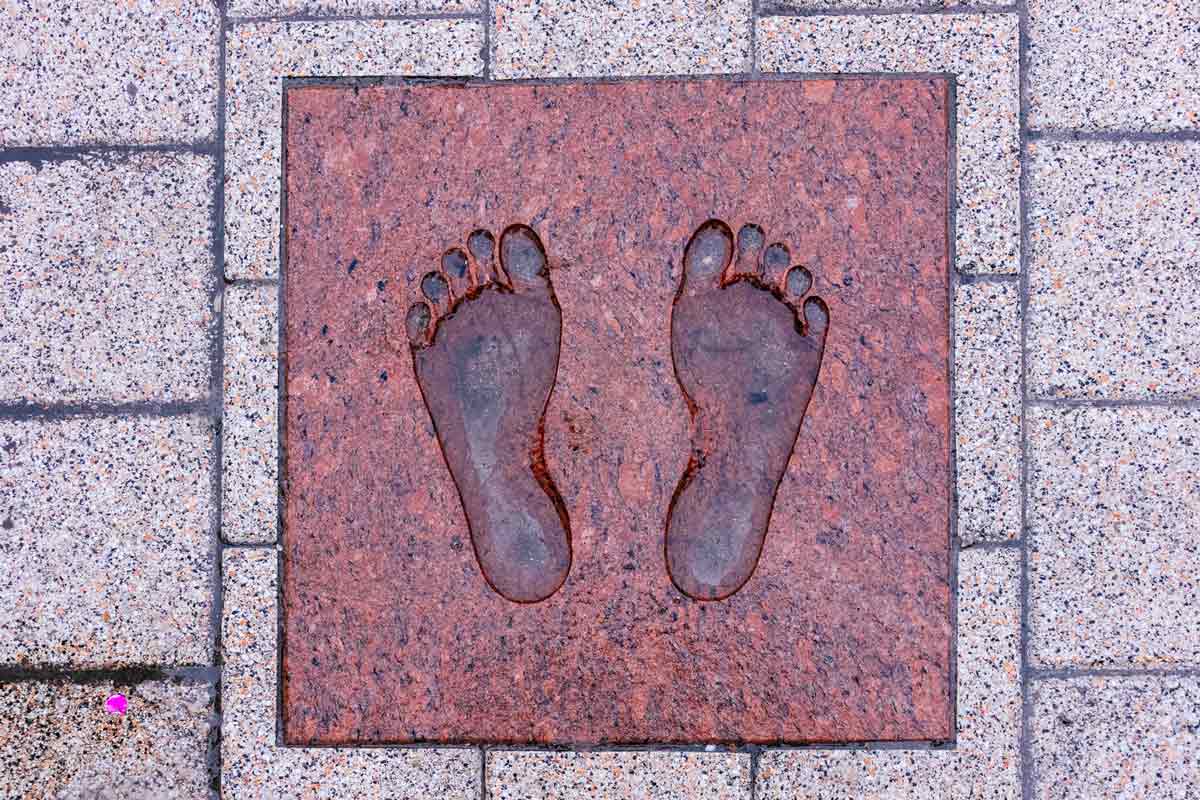 This marker in front of the Cathedral Basilica in Vilnius’ Cathedral Square commemorates the beginning of the Baltic Way.

“Hand to hand and heart to heart: the Baltic Way” isn’t a story about Cindy Lou Who and the Grinch. It’s a story about two million dedicated souls forming a 419-mile-long human chain. 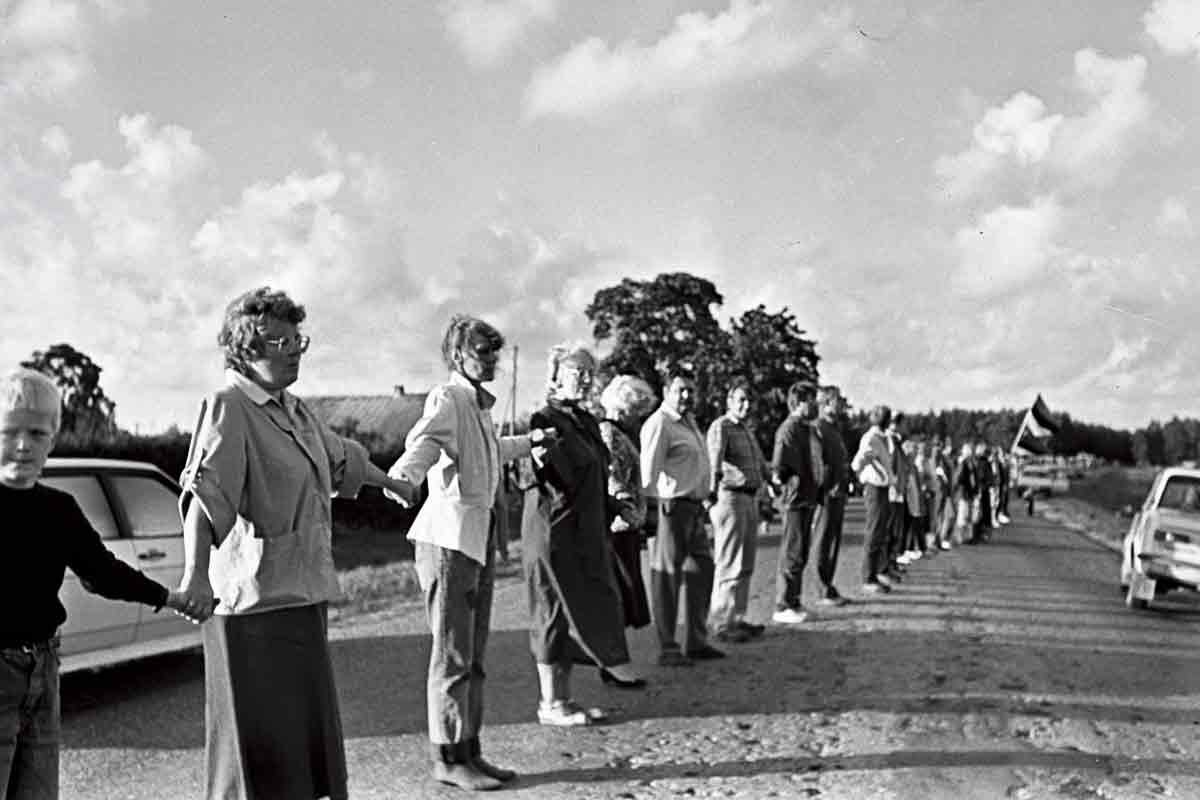 The Baltic Way at Rapla, Estonia. Photograph by A. Ploompuu. All rights reserved by the National Archives of Estonia.

What was the Baltic Way?

The Baltic way was a peaceful protest against the Soviet occupation of the three Baltic States (Lithuania, Latvia and Estonia). On Aug. 23, 1989, approximately two million people ~ about a third of the population of the three countries ~ joined hands to form a human chain that spanned about 419 miles.

This human chain connected the three Baltic capitals. It began in the Cathedral Square in Vilnius, proceeded through Lithuania and Latvia to the Freedom Monument in Riga, then north across Latvia and Estonian before ending at Tall Hermann Tower in Tallinn. 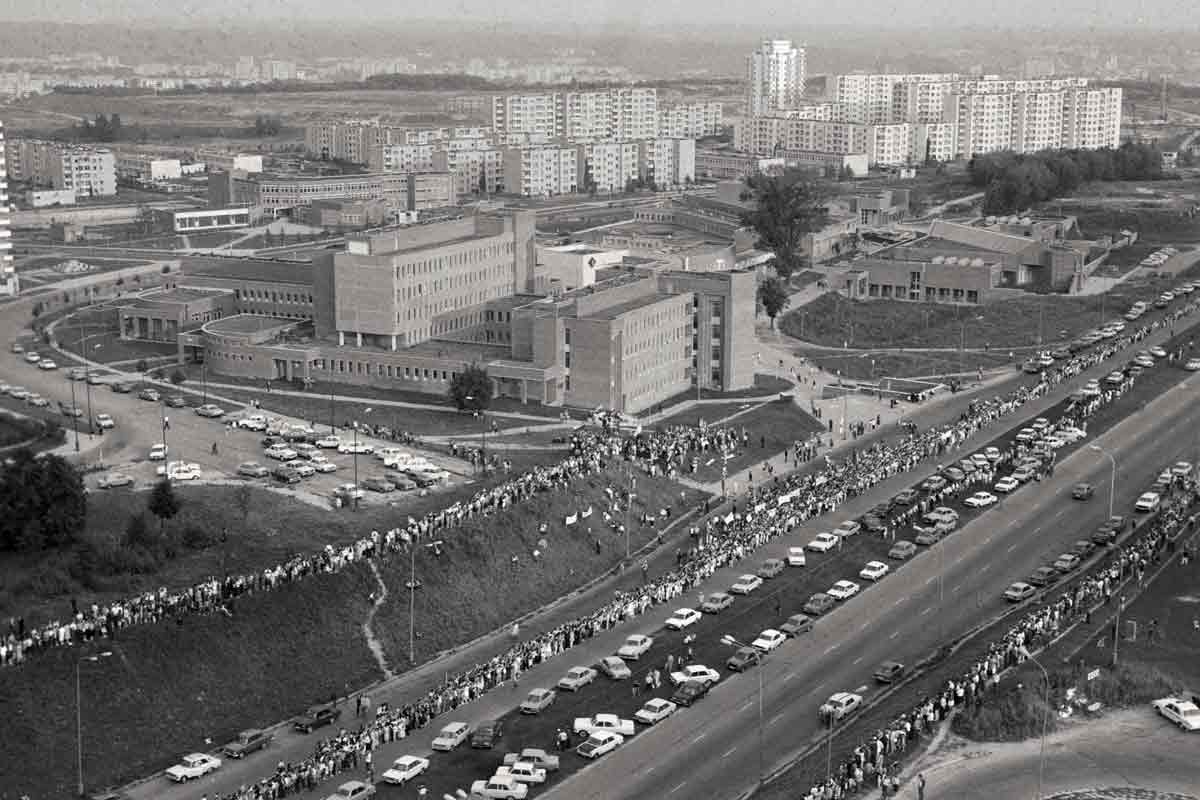 Vilnius. Photograph by K. Jankauskas and A. Sabaljauskas. All rights reserved by the National Archives of Estonia. 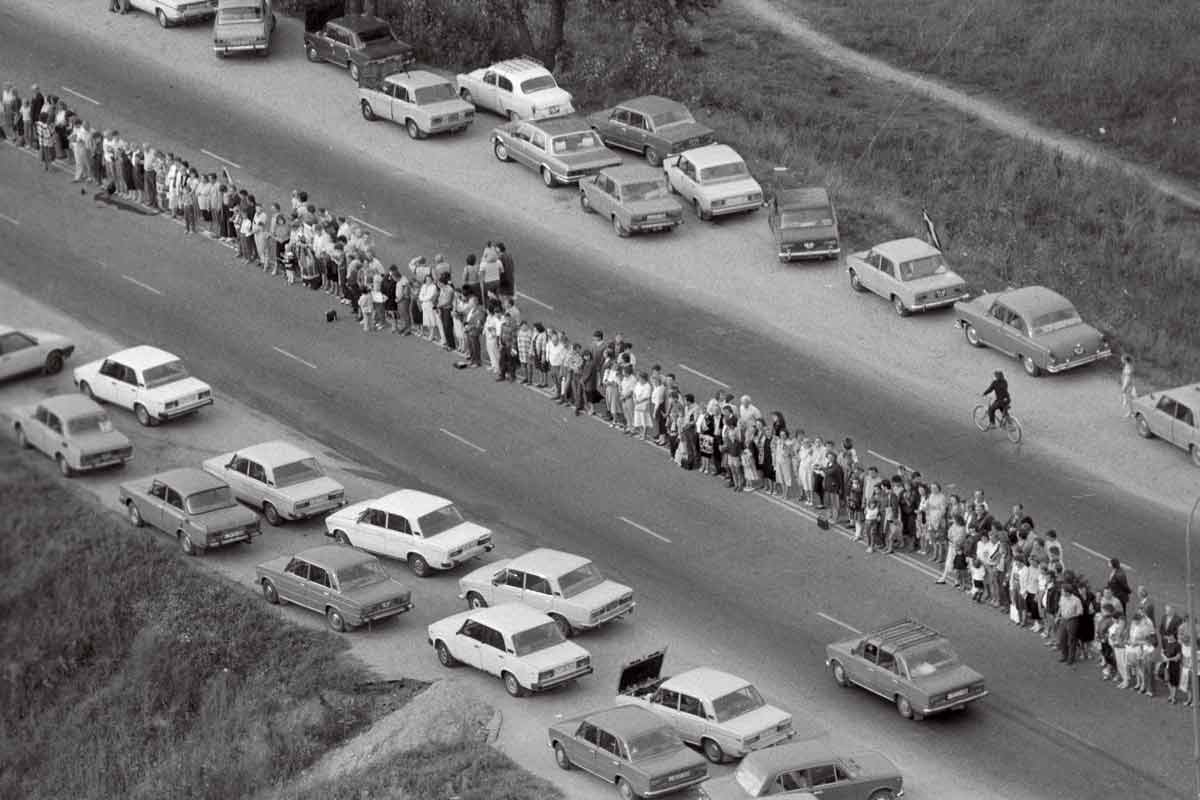 Outside Vilnius. Photograph by by K. Jankauskas and A. Sabaljauskas. All rights reserved by the National Archives of Estonia.

That day was chosen because it was the 50th anniversary of the Molotov-Ribbentrop Pact (MRP). The MRP was a secret agreement between Nazi Germany and the Soviet Union that divided Eastern Europe into “spheres of influence” and led to the occupation of the Baltic States. 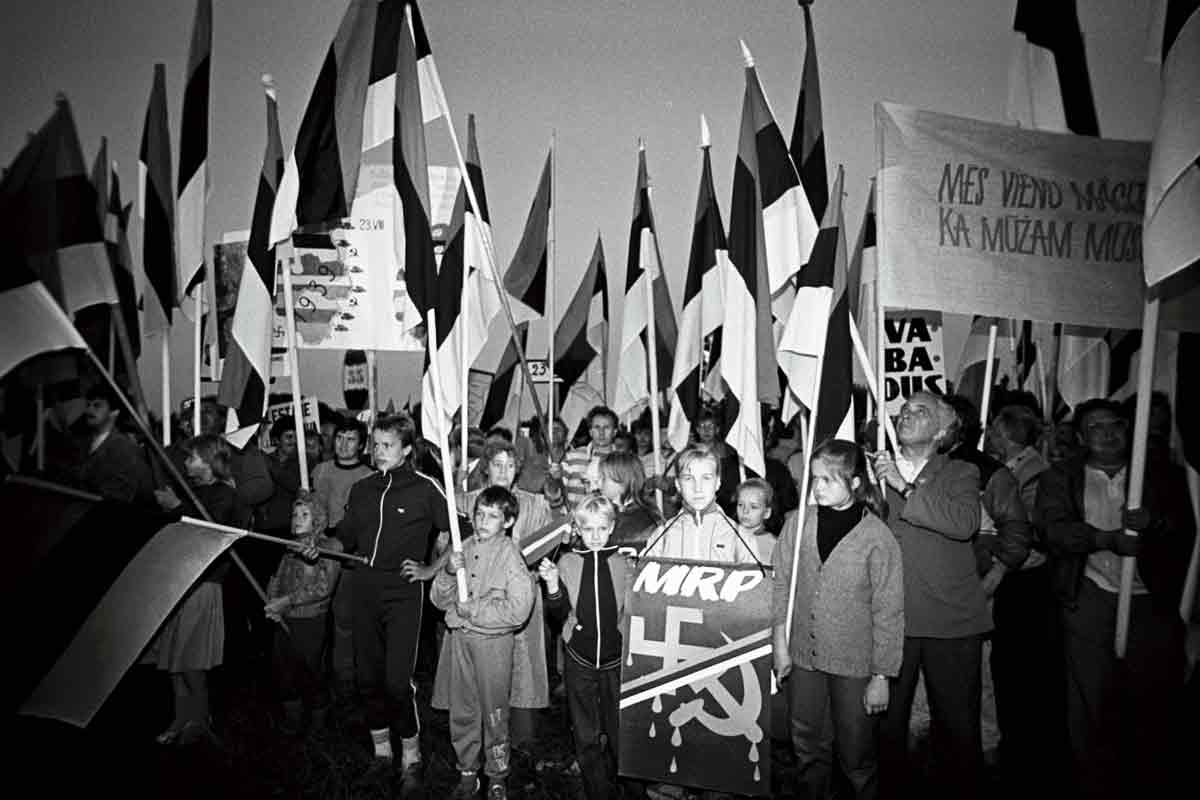 On the Estonian-Latavian border. Photograph by Tiit Veermäe. All rights reserved by the National Archives of Estonia. 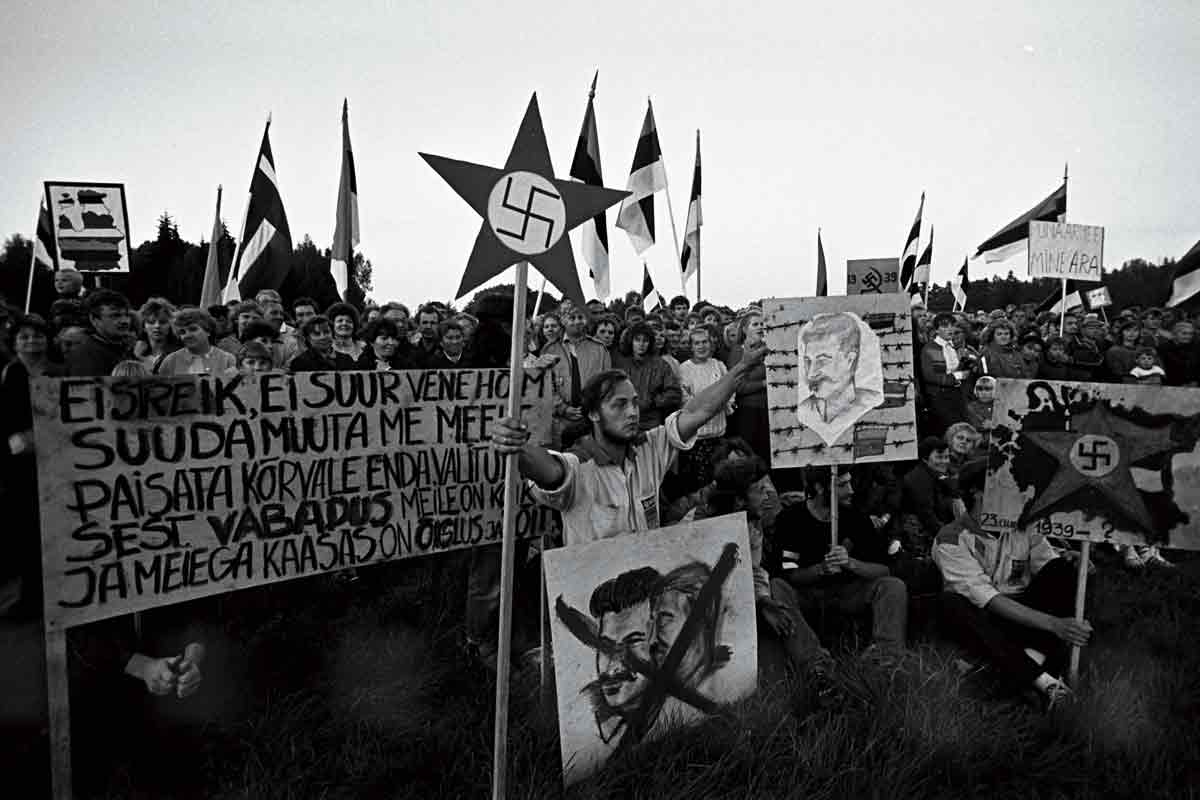 On the Estonian-Latavian border. Photograph by Tiit Veermäe. All rights reserved by the National Archives of Estonia.

Why protest against the Molotov-Ribbentrop Pact?

What was the result of the Baltic Way? 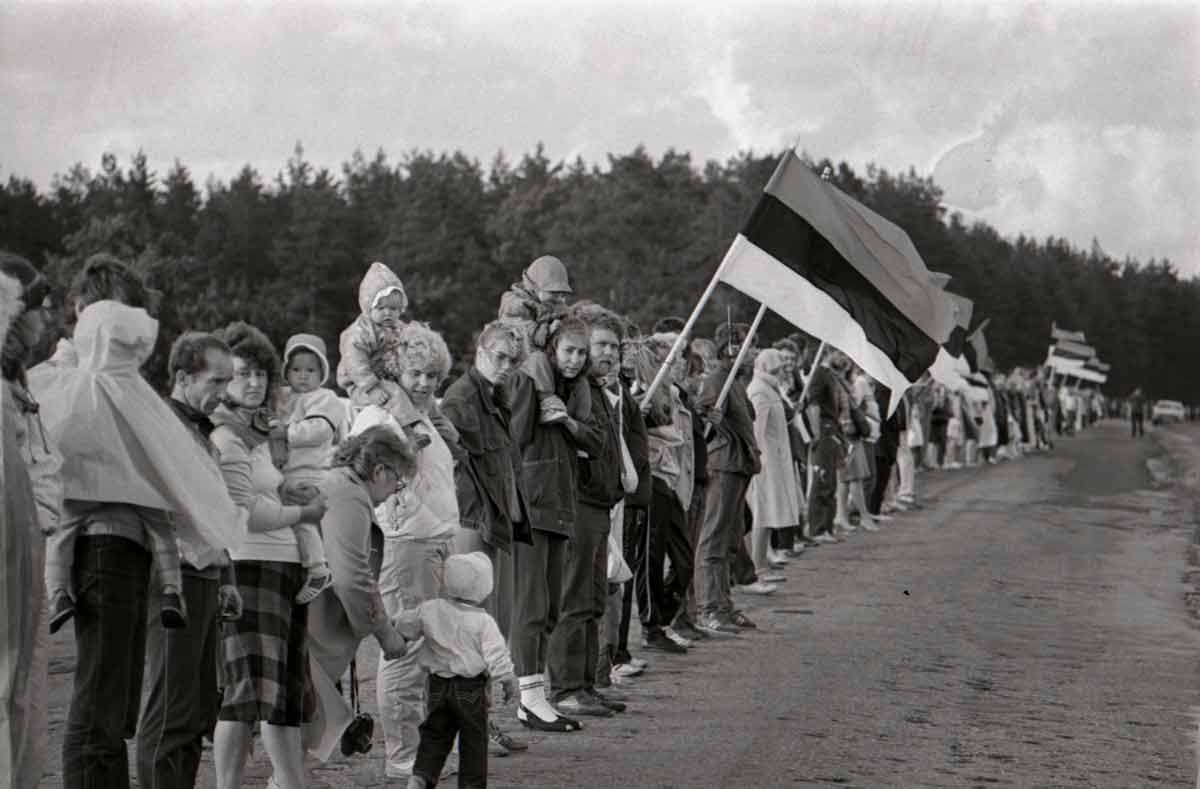 Estonians. Photograph by Harald Leppikson. All rights reserved by the National Archives of Estonia. 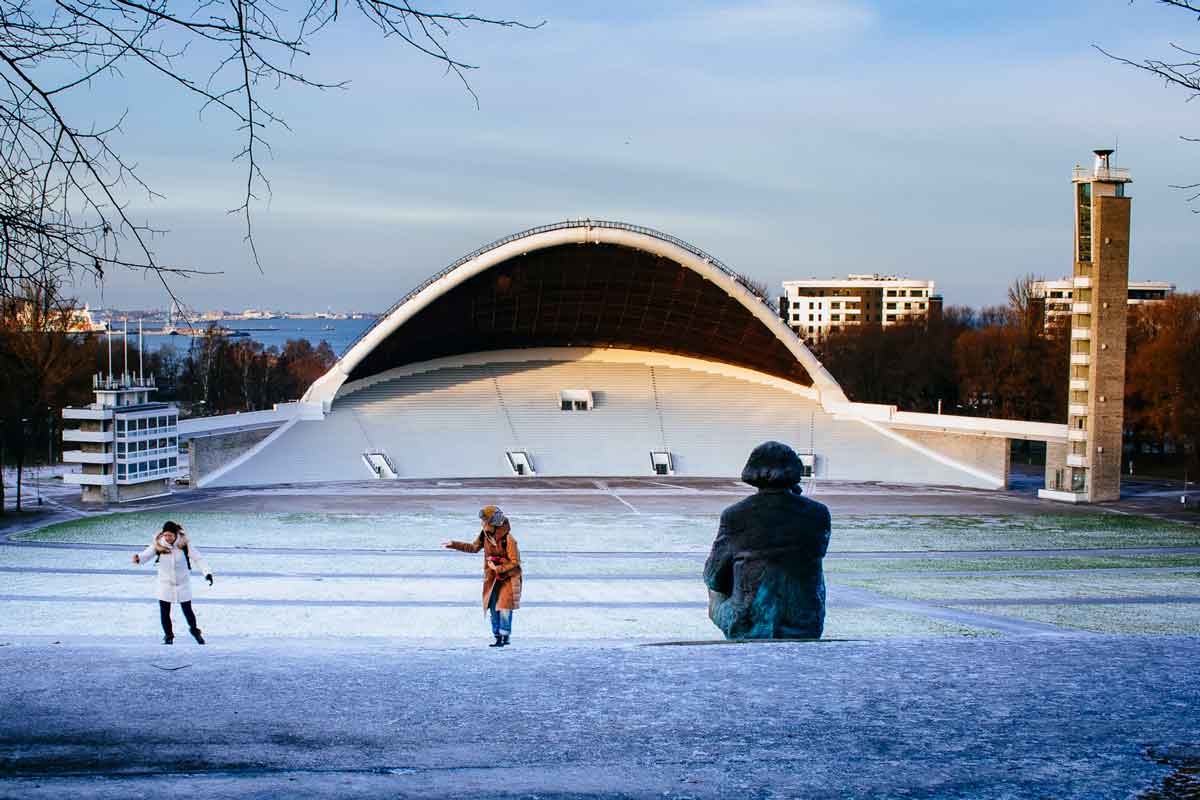 This amphitheater ~ the Tallinn Song Festival Grounds ~ was one of the stops on our tour of Tallinn. At the time, we didn’t understand why we stopped here. Read on to find out why it was important.

One of the stops on our tour of Tallinn was at this empty amphitheater. It’s a fine structure, one our guide was obviously proud of. When I asked why, she said something like “singing has always been very important to us.” And that was it. A couple of the others on the tour wandered off to have a snowball fight and we decided to check out the statue of Gustav Ernesaks.*

In June of 1988, after the official part of the Old Town Festival in Tallinn, a crowd gathered at the Tallinn Song Festival Grounds, the amphitheater that we visited on our tour, to sing patriotic songs.

At that time, singing patriotic songs was an act of protest against the Soviet occupation. This particular protest act was only one of many across the Baltic States. From 1987 until they regained their independence in 1991, people in the Baltic States used patriotic songs as a means of protest against the Soviet Occupation. Today, these singing protests are called the Singing Revolutions.

We didn’t understand why we stopped at that amphitheater. But now, having learned about the Baltic Way and the Singing Revolutions, we understand our tour guide’s pride in the venue. Hand to hand in the human chain and heart to heart with their patriotic songs, the Baltic states did the seemingly impossible: they peacefully regained their independence.

The Baltics Are Waking Up

The Baltics Are Waking Up is trilingual song composed by Boris Reznik for the Baltic Way. It has become known as the “joint anthem of the Baltics.” The following video has great footage from that day and the soundtrack is this song. The second video has a much larger collection of images from that day.

*Gustav Ernesaks was an Estonian composer and choir conductor. He wrote a new melody for a famous Estonian patriotic poem. This new version became an unofficial national anthem. He was also one of the founders of the Estonian Song Festival tradition. His version of the poem/song was always sung at the the end of Song Festival.