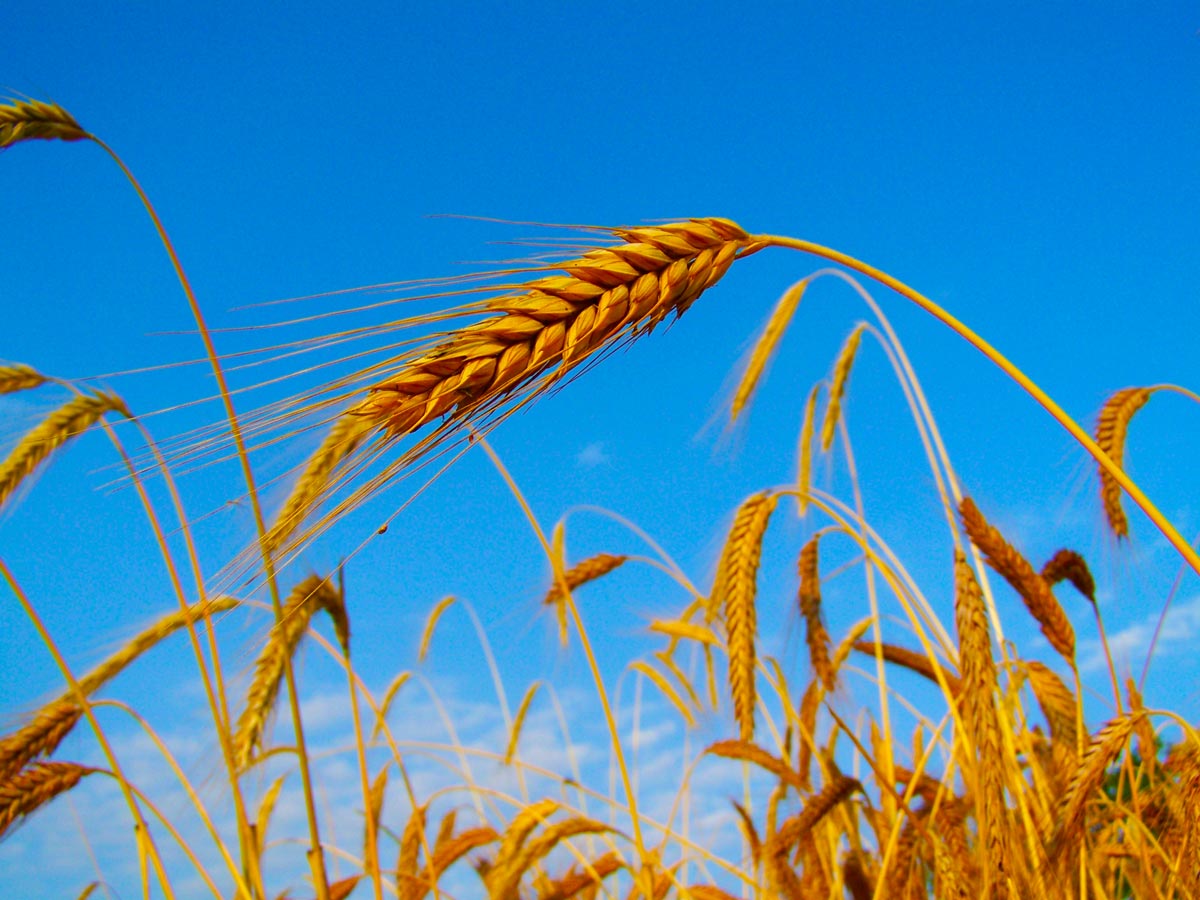 Rye is an important ingredient in Lithuanian cuisine. Image courtesy of Unsplash.

Lithuanian cuisine is a combination of fresh, native ingredients and dishes borrowed from other cultures.

Listing all the parts of Lithuanian cuisine is like making a grocery list of the most delicious ingredients ever. Beginning with the first human inhabitants about 12 or 13,000 years ago, Lithuanians made food with what was locally available. Then, because of its location as a cultural crossroad, the foods of other cultures (Tatars, Turks, Germans, Scandinavians, etc.) were added. And finally, about 200 years ago, the potato was introduced to Lithuania, quickly becoming a star of Lithuanian dishes.

We didn’t know this before visiting Vilnius. But, since we love to eat, we decided to take a food tour.

According to our tour guide, Viktorija, Lithuanians pack dark rye bread to take with them almost anywhere and everywhere they go. She brought a large loaf with her when she studied in South Korea. A typical loaf of the bread ~ about double the size of a typical loaf of American bread and many times heavier ~ is about 8 Euro and easily fits in a suitcase. 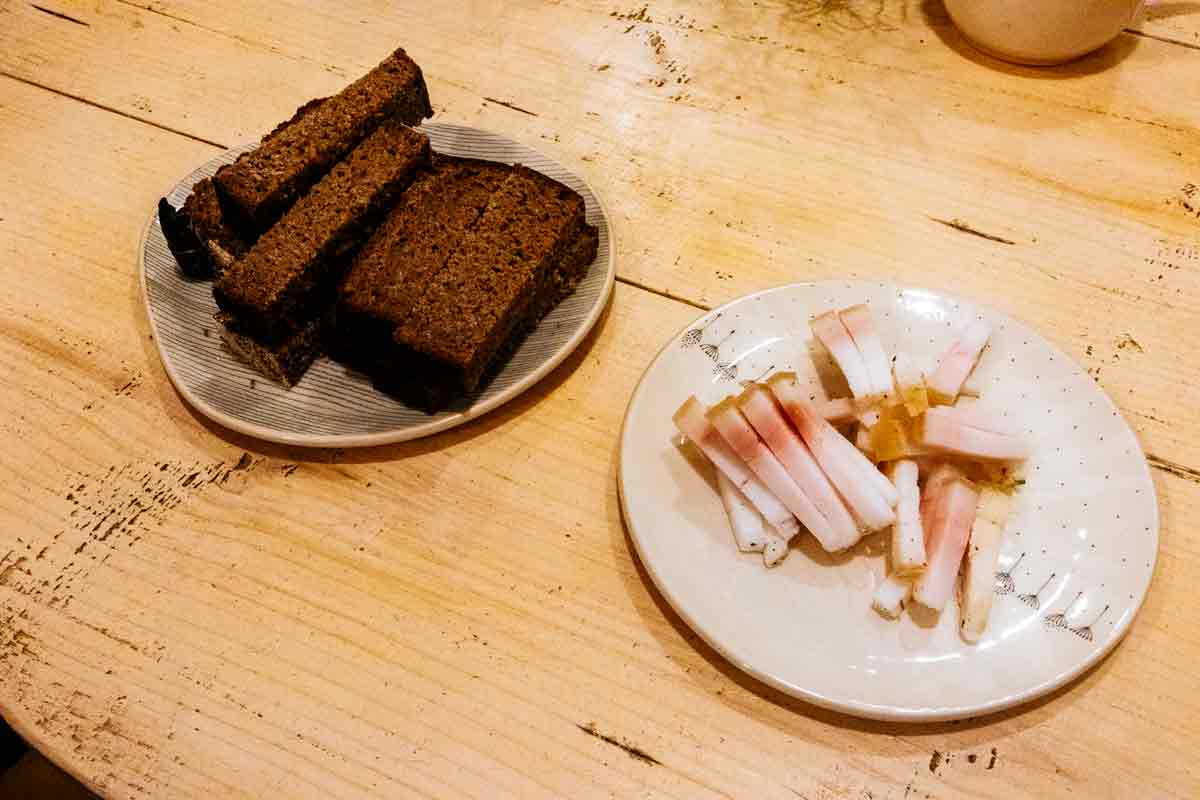 We continued on to a family-run restaurant, Lagaminas, for the main meal. The first course was rye bread with garlic cloves and cooked pigs’ ears. 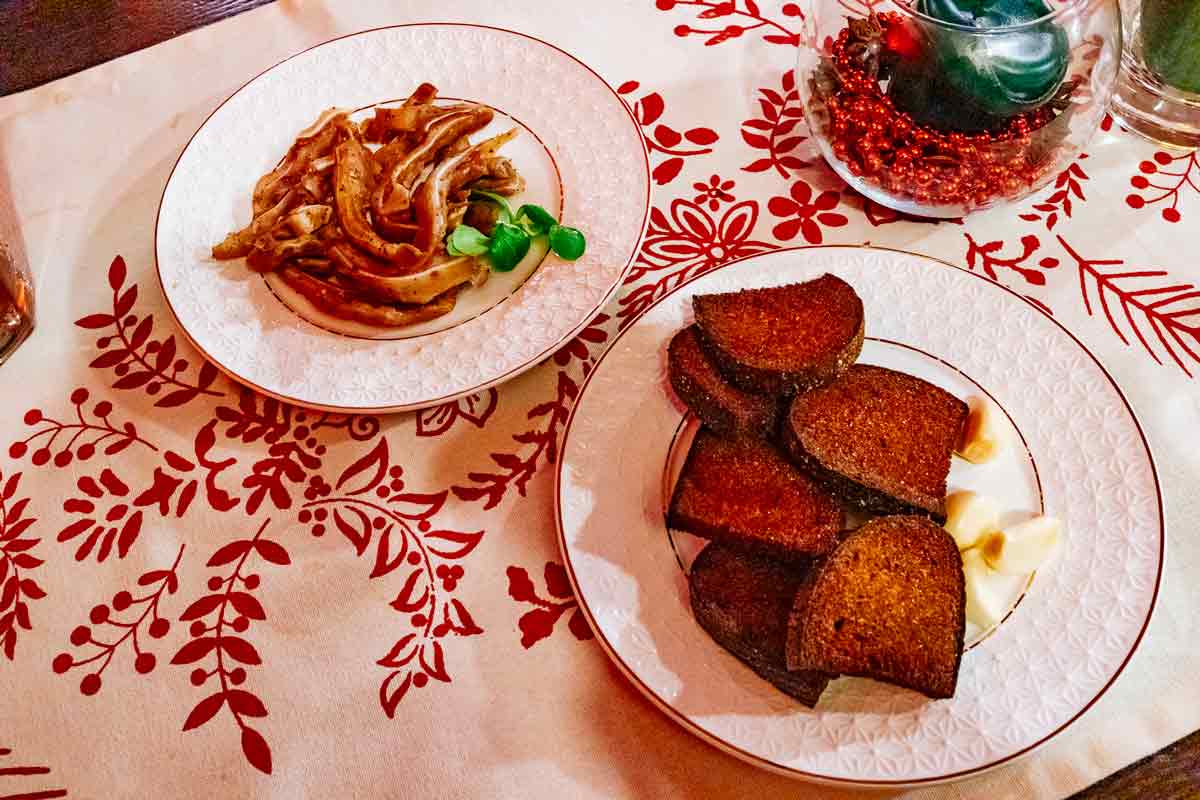 The rye bread is fried until crispy and then you rub the garlic cloves each slice. The garlic added a nice burst of flavor to the rye and the crunchiness from being fried is very satisfying to chew. The bread also came with thin strips of cooked pigs’ ears. Chewy, a bit tough, a bit greasy, not a lot of flavor ~ they definitely weren’t silk purses. We happily left them alone in favor of the fried rye bread and garlic.

Soup is a comfort food 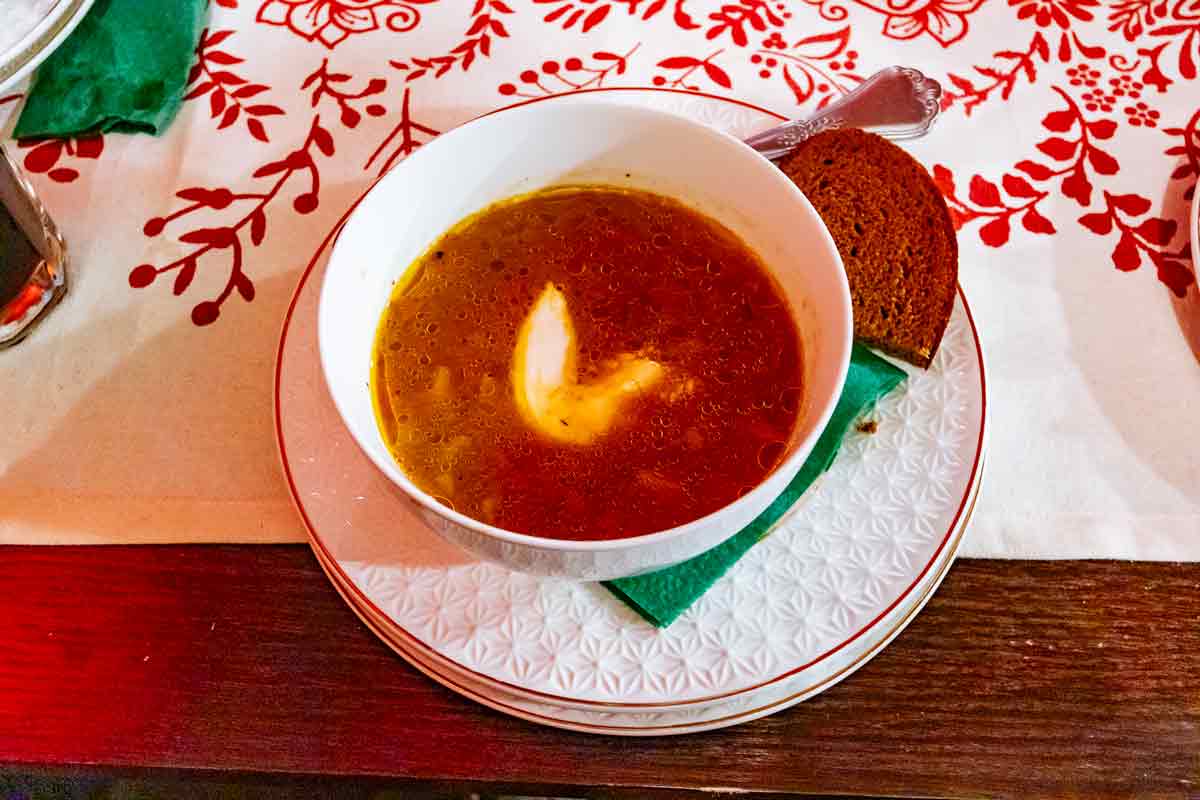 Our next course was mushroom soup topped with a dollop of sour cream and accompanied by another slice of fried rye bread. Brothy, with mushrooms and onions, it was delicious.

Our last dish at Lagaminas Restaurant was a cepelinai ~ a potato dumpling. It’s essentially a spiced meatball thickly coated with a gel-like potato mixture and topped with bacon and caramelized onion. They were delicious. 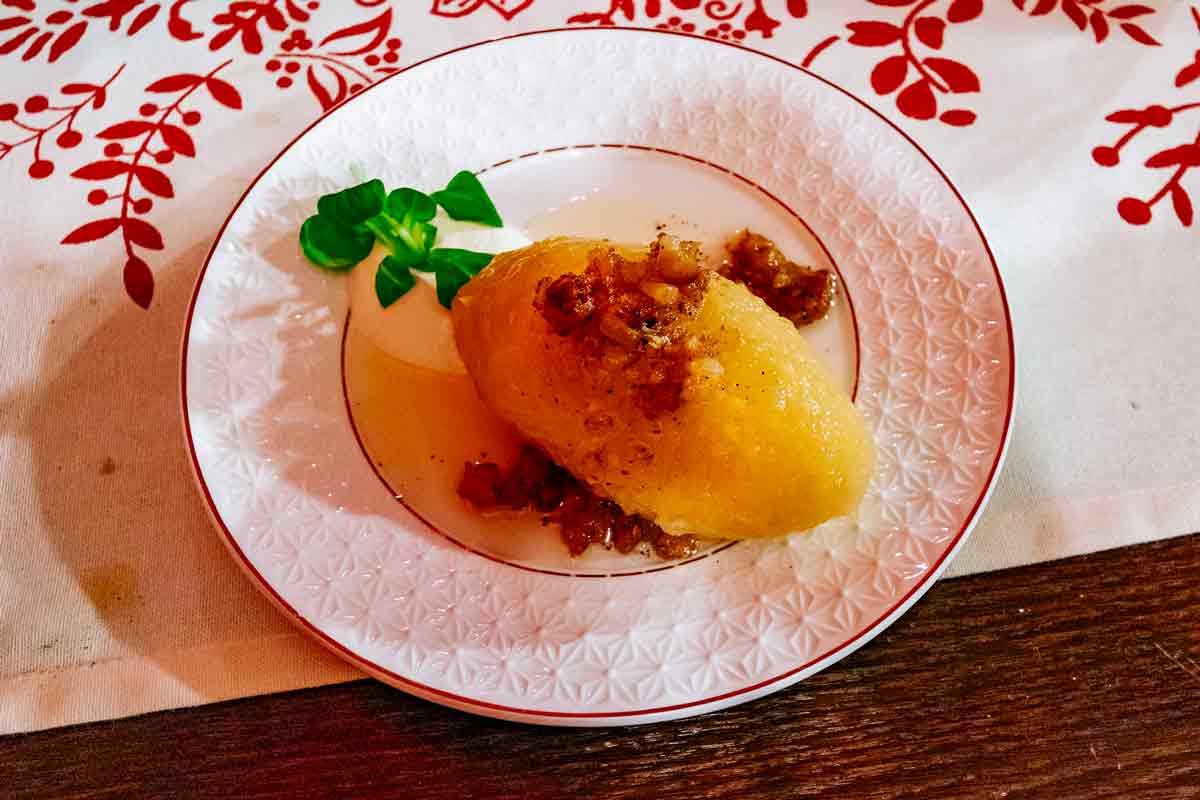 Cepelinai, a potato dumpling, is also known as a zeppelin because of its shape.

According to Viktorija, making cepelinais is a family affair. First, a large number of potatoes are peeled and grated, then placed into a linen sack and pressed with a heavy object to drain (the potato water is saved and used later). Next, the drained potatoes are mixed with cooked, mashed potatoes (1 part mash to 3 parts grated). This mixture is made into a hand-sized patty. A prepared meatball is placed in the middle and the potato patty closed around it, forming a zeppelin-shaped dumpling. A large pot, filled with water mixed with the liquid drained from the potatoes, is brought to boil. The dumplings are placed in the boiling pot and cooked for up to an hour.

The cepelinais can be eaten straight from the pot, topped with a seasoning of choice, or saved for later, when they are sliced and sautéed to reheat. Absolutely delicious.

Cheese for dessert? Absolutely! Especially when it’s accompanied with mead.

The final stop of the tour was at Džiugas, a local cheese shop famous for their hard cheeses.

We began with samples of two Džiugas cheeses: one aged 12 months and the other aged 18 months. They were reminiscent of Parmesan and had a similar flavor profile. We preferred the older one because it was more flavorful.

Next was a selection of candies made with cheese. They didn’t really taste cheesy, but we couldn’t quite put our finger on the flavors. However, they did have the textural sensation of cheese.

Finally, to wash it all down: a shot of mead. With about 30% alcohol, it was sweet, with a thicker mouthfeel like syrup. It was a flavorful ending to a great tour.

On our food tour, Viktorija pointed out the restaurant Queensberry. In addition to good modern Lithuanian cuisine, it was reputed to have Vilnius’ best selection of Lithuanian wine. So we returned another evening to see what they had to offer.

According to the waiter/bartender, winemaking in Lithuania has traditionally been limited to homemade wines made from fruits. But today, there are some commercial wineries. Queensberry’s wine list was delightfully long.

I enjoy reading wine lists. I like to see what’s on offer, how wide the selection is (both geographically and by type of grape) and how the wines pair with the food. Queensberry’s wine list was an unexpected gift and after much deliberation, we finally ordered a glass of four different wines.

It’s always more fun to have food with wine, so we also ordered an appetizer of grilled rye bread and local blue cheese dip. The grilled rye bread came with garlic, of course. I think we’ve found a new favorite snack.

Like the homemade wines, the commercial wines were made from fruits, not vinifera grapes (like cab sauv, merlot, chardonnay, etc.) This did not deter us. On the contrary, after helping judge the homemade wines category in the Kentucky State Fair for over a decade, we knew how good a fruit wine could be.

We ordered four wines: a raspberry champagne, a dry blueberry, a semi-sweet strawberry and an apple ice wine. 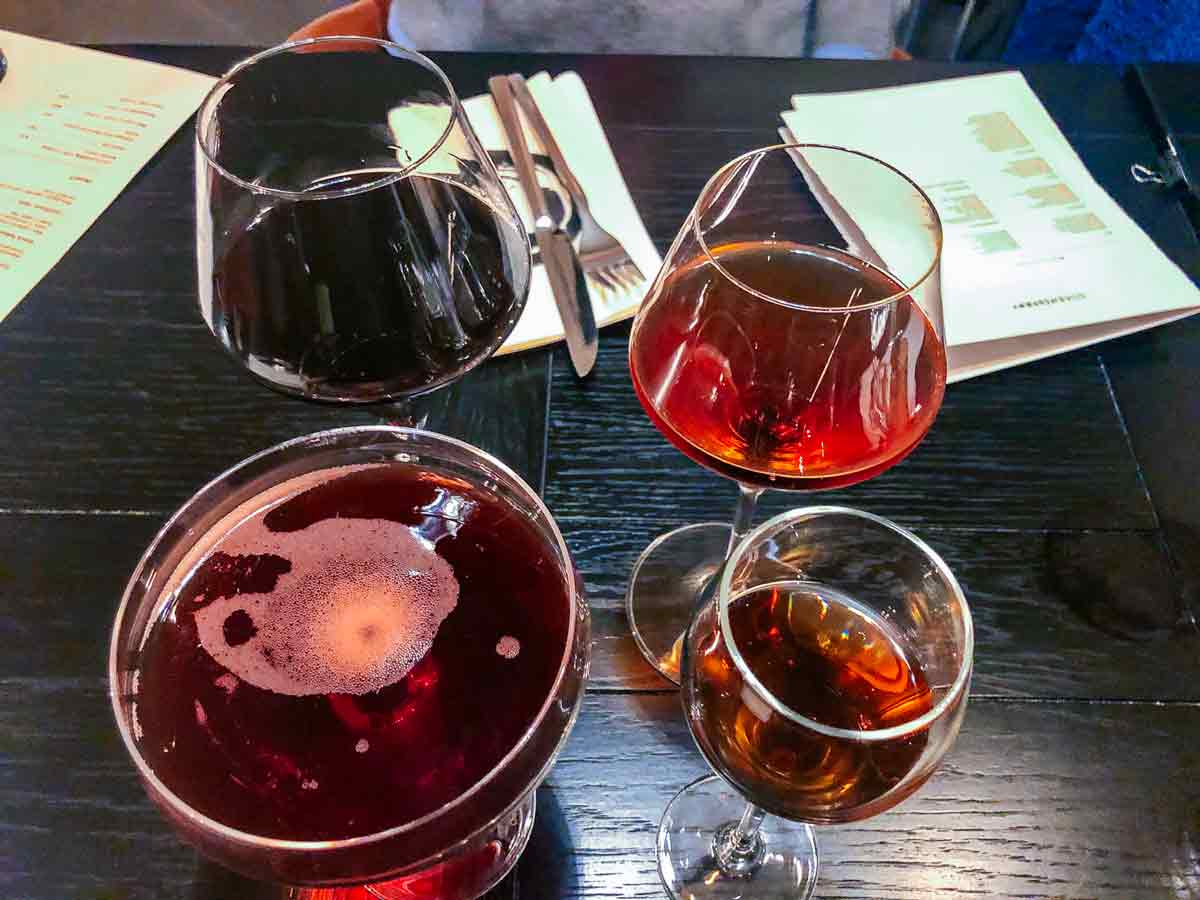 The raspberry sparkler had an orangish-cranberry color. The nose was fresh-crushed raspberry. In the mouth, there was a strong frizzante, the taste of sour raspberries and it was searingly dry.

The blueberry wine was exotic and almost opaque. It had aromas of smoke, spice and menthol. In the mouth, it reminded Scott of blueberry pie and Rosemary of blueberry skins. It was quite dry.

The strawberry wine had a beautiful rose-amber color. The nose was a rich strawberry aroma with a hint of cream (rather like ice cream). It had a distinct strawberry flavor, well-balanced, semi-sweet with a soft mouthfeel and long finish.

The apple ice wine was amber in color with a nose of cooked apple juice (like Motts). It tasted like really sweet apple juice mixed with honey. The sweetness lingered in the aftertaste.

In their post-Soviet era, Lithuania is once again a cultural crossroad for cuisine. Italian cuisine in particular appears to be well-represented in Vilnius. We had a Neapolitan pizza for lunch one day that was so good we went back the next day and ordered it again. Of course, it didn’t hurt that there was also a chocolate dessert that was out of this world.

Another day for lunch, we stumbled across a Korean restaurant and had a tasty bibimbap.

Is Lithuania a foodie destination?

Fresh produce, delicious traditional foods, an emerging winemaking industry and international cuisines ~ it seems that Lithuania has something to please every palate. Before our trip, I never would’ve thought of Lithuania as a foodie destination. Now, I certainly do.