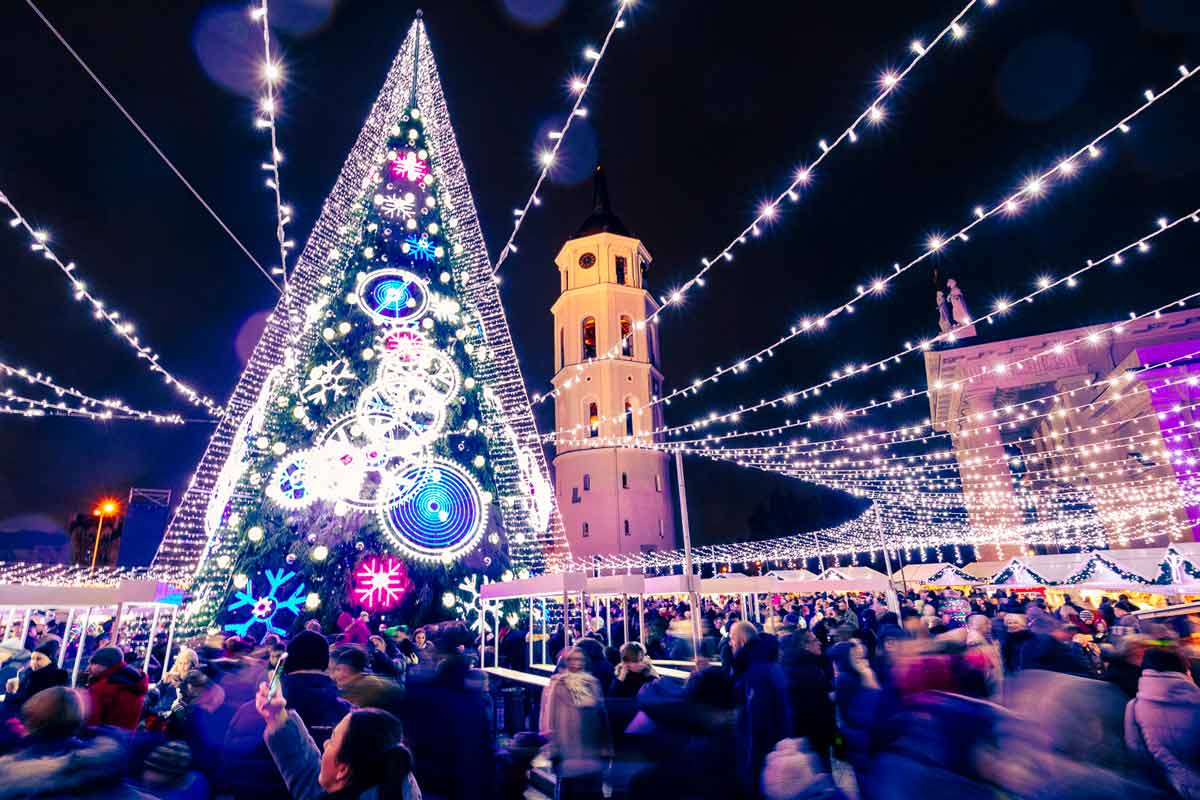 The Christmas market at Cathedral Square in Vilnius’ Old Town. In this part of the world, where the sun sets around 4 in the afternoon, the holiday lights and festive atmosphere are a welcome respite from the rain and darkness.

Vilnius: capital of the Baltic nation of Lithuania, the last European country to convert to Christianity and once home to the largest Jewish population in eastern Europe. Napoleon once called it ”the Jerusalem of the North”.1

Today, around 77% of residents of Lithuania are Catholic and about 4% are Eastern Orthodox2. Since most Lithuanians are Christian, small wonder that there are two Christmas markets. Because of the Eastern Orthodox adherents, both markets remain open until January 6th, the day before Orthodox Christmas. We capitalized on this fact by visiting over New Year’s, thus extending our Christmas celebration into January (just as we did with our visit to Tallinn). 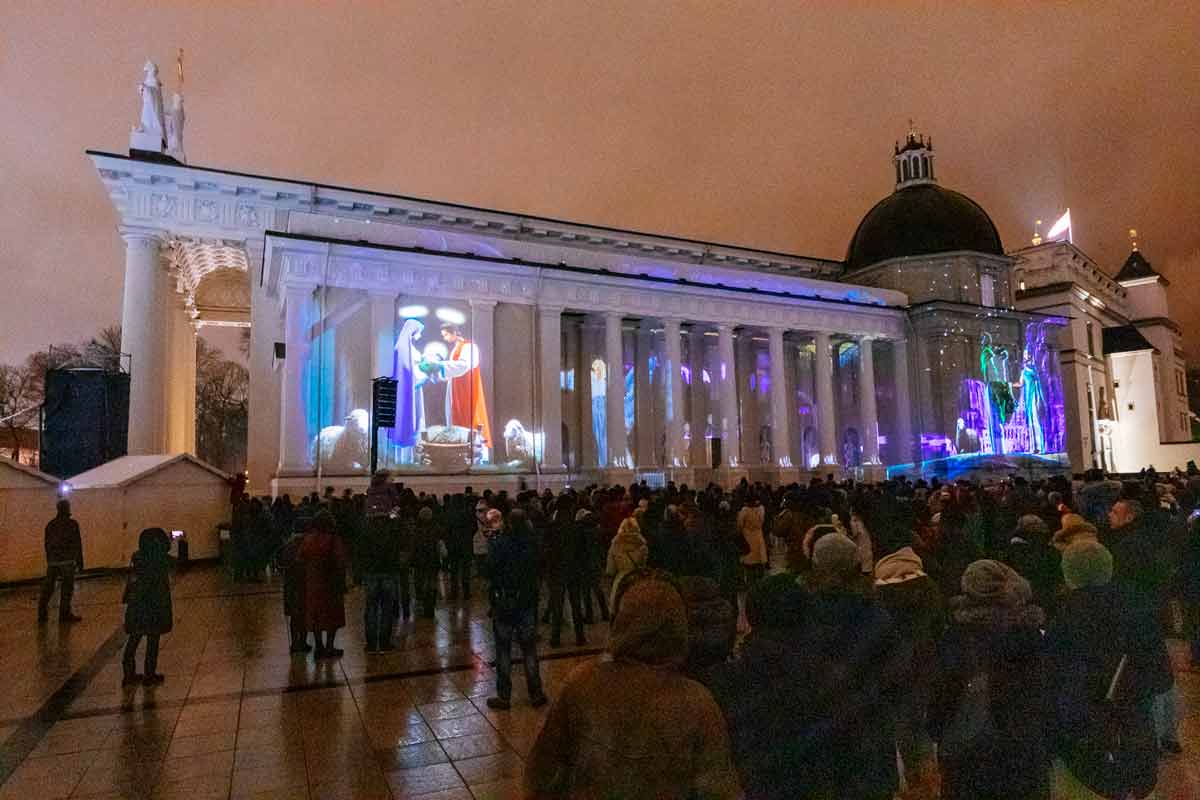 The main Christmas market is located in Cathedral Square in Vilnius’ Old Town. As part of the holiday celebration, each year a holiday-themed video is projected onto the side of the Cathedral Basilica of St. Stanislaus and St. Ladislaus of Vilnius, the center of Catholic spiritual life in Lithuania. 2018’s show was inspired by the Bible’s history of the Earth from its creation up to the birth of Jesus, shown here. 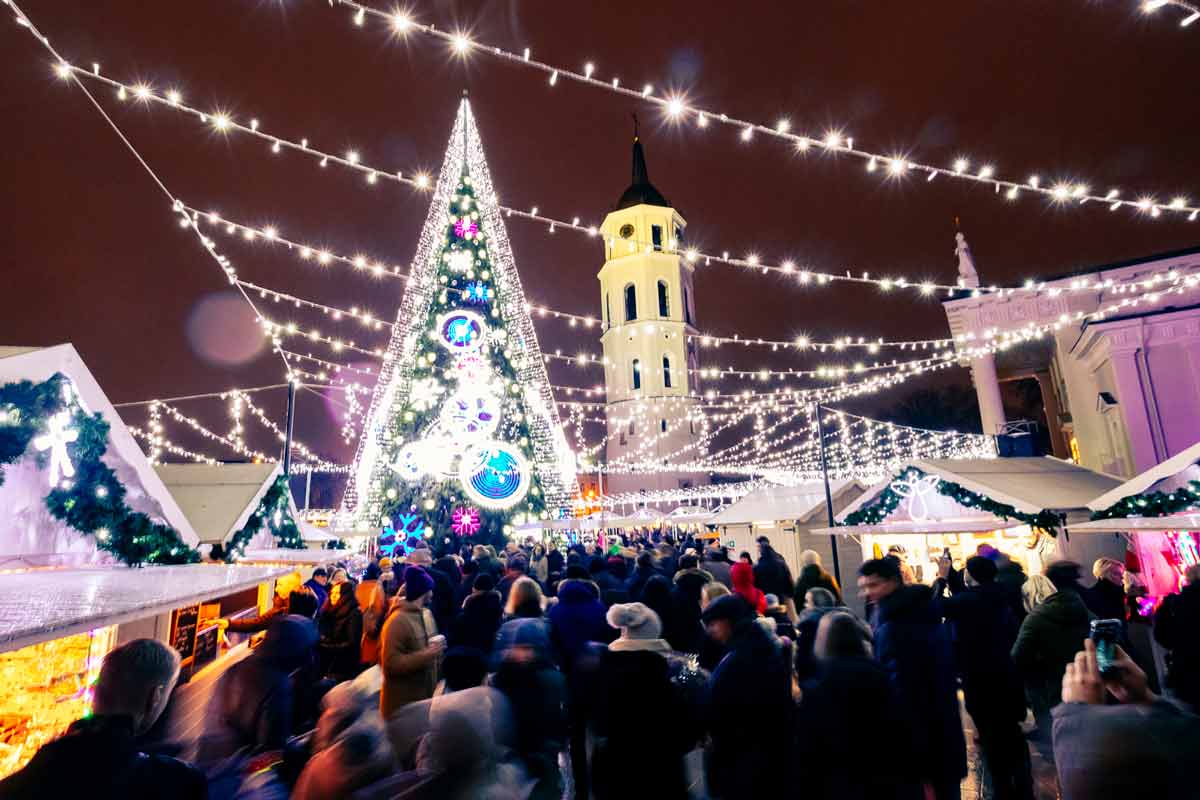 The main Christmas market is next to the Cathedral and its bell tower (just to the right of the Christmas tree). The vendor booths are arranged in a square around the Christmas tree, enclosing the entire market. The booths open inward and the backs of the booth face outward, creating a mini “walled Christmas city.” On a rainy Saturday evening, this walled Christmas city was packed with families, friends meeting friends and tourists, like us, who were there to revel in the holiday spirit. 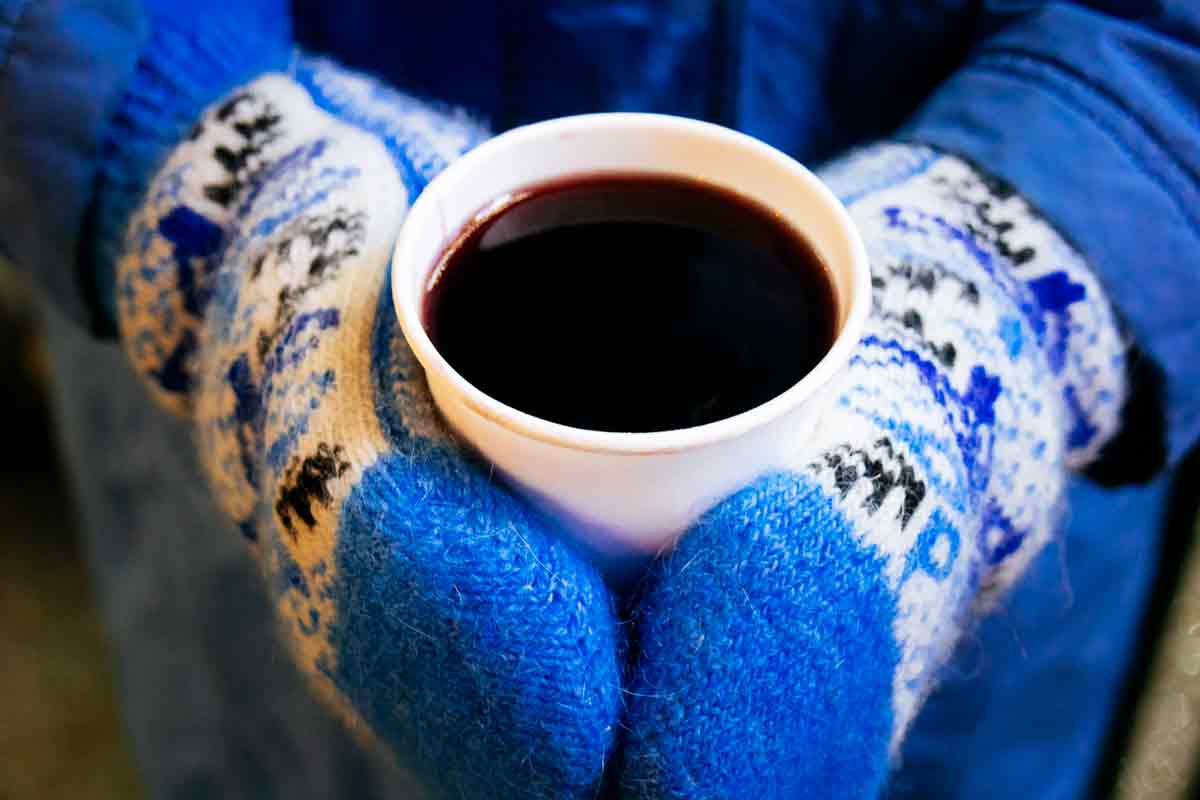 Mulled wine is the preferred Christmas market beverage and is available at many of the booths. The aroma permeates the entire market and adds to the holiday spirit. 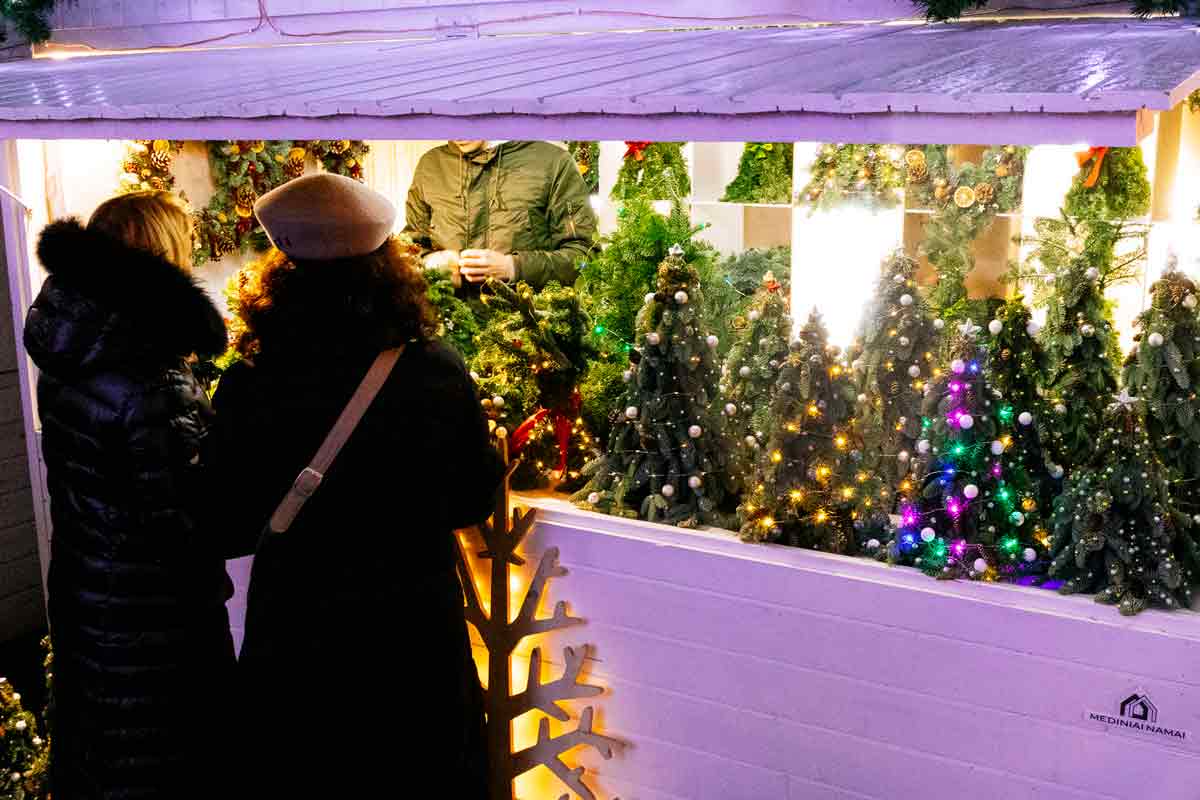 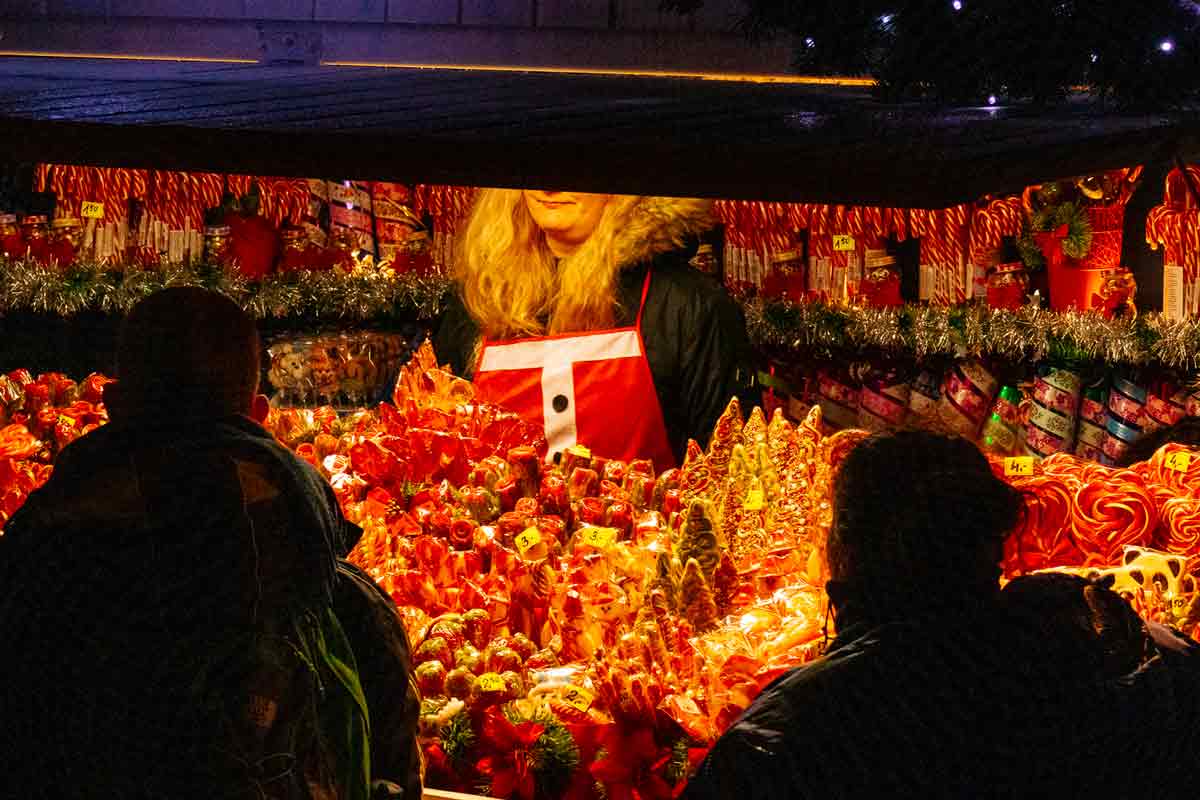 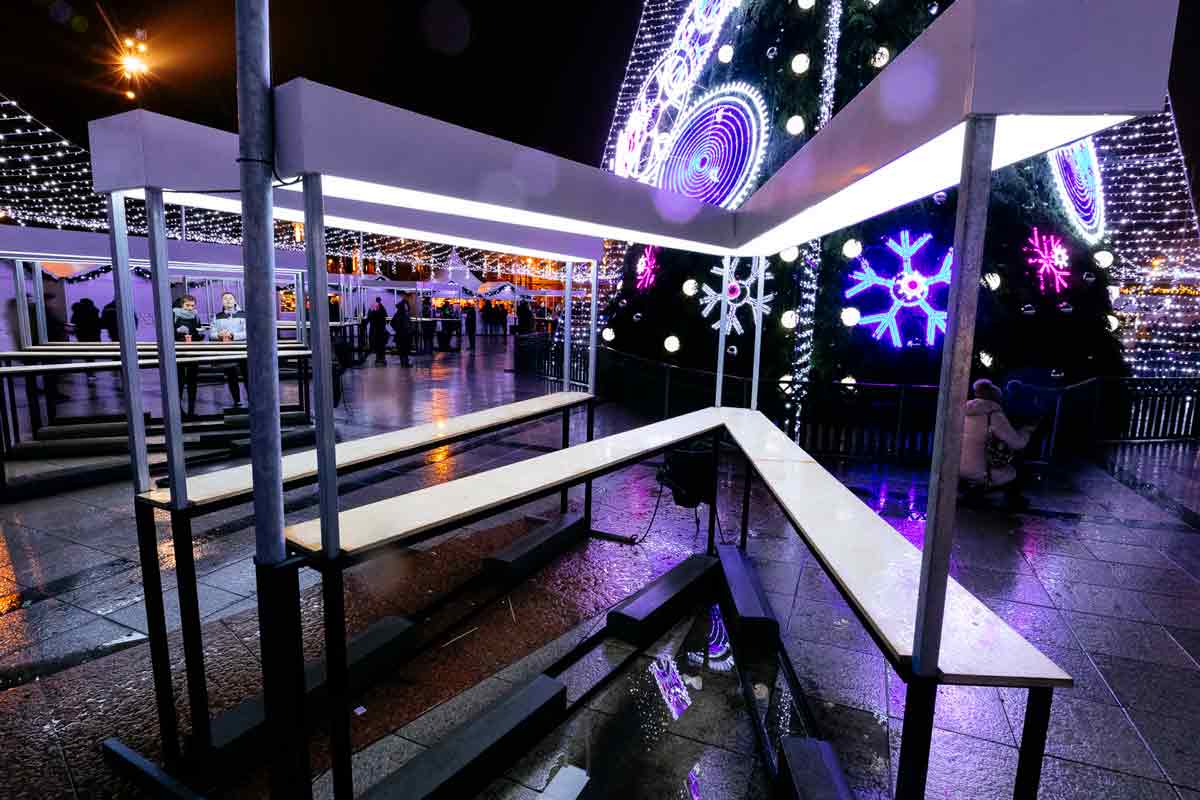 The Christmas tree was surrounded by oddly-shaped snack tables. We didn’t understand the reason for the odd shapes until … 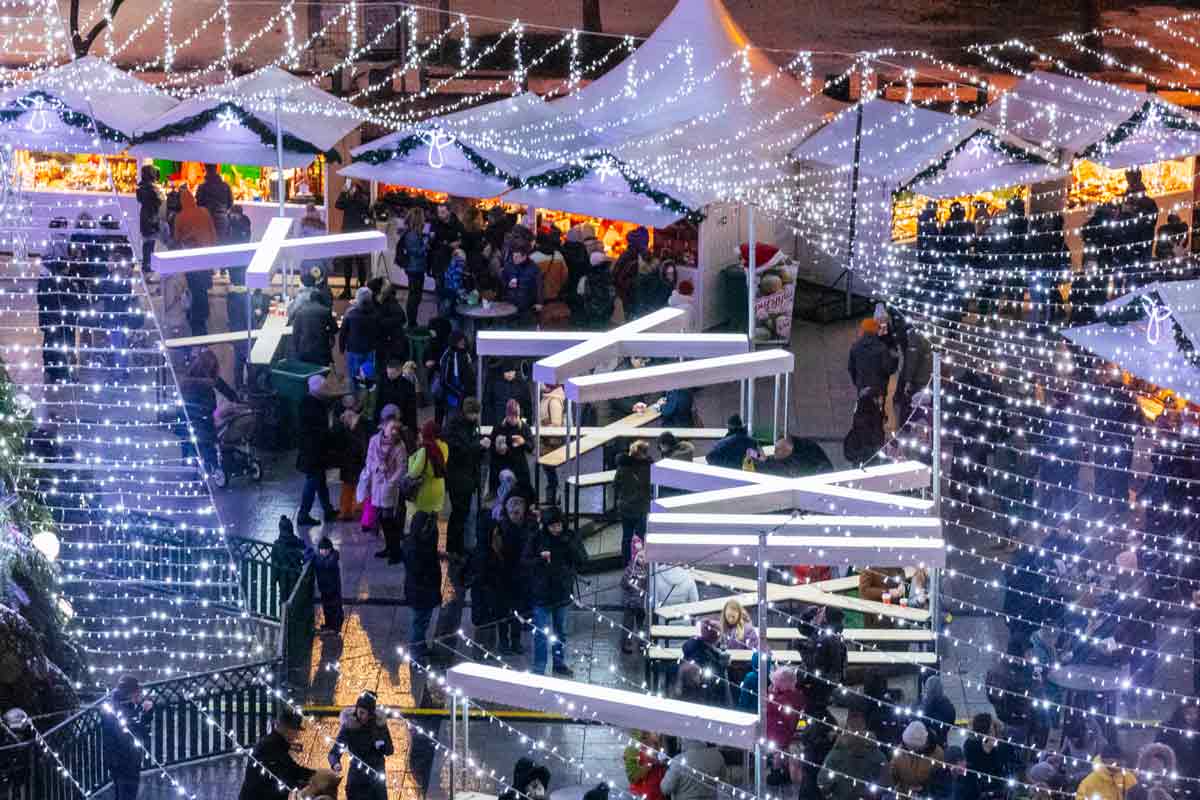 … we saw the tables from the second-story window of the adjacent bell tower. The tables were the Roman numerals of a clock face and the Christmas tree was the center of the clock. 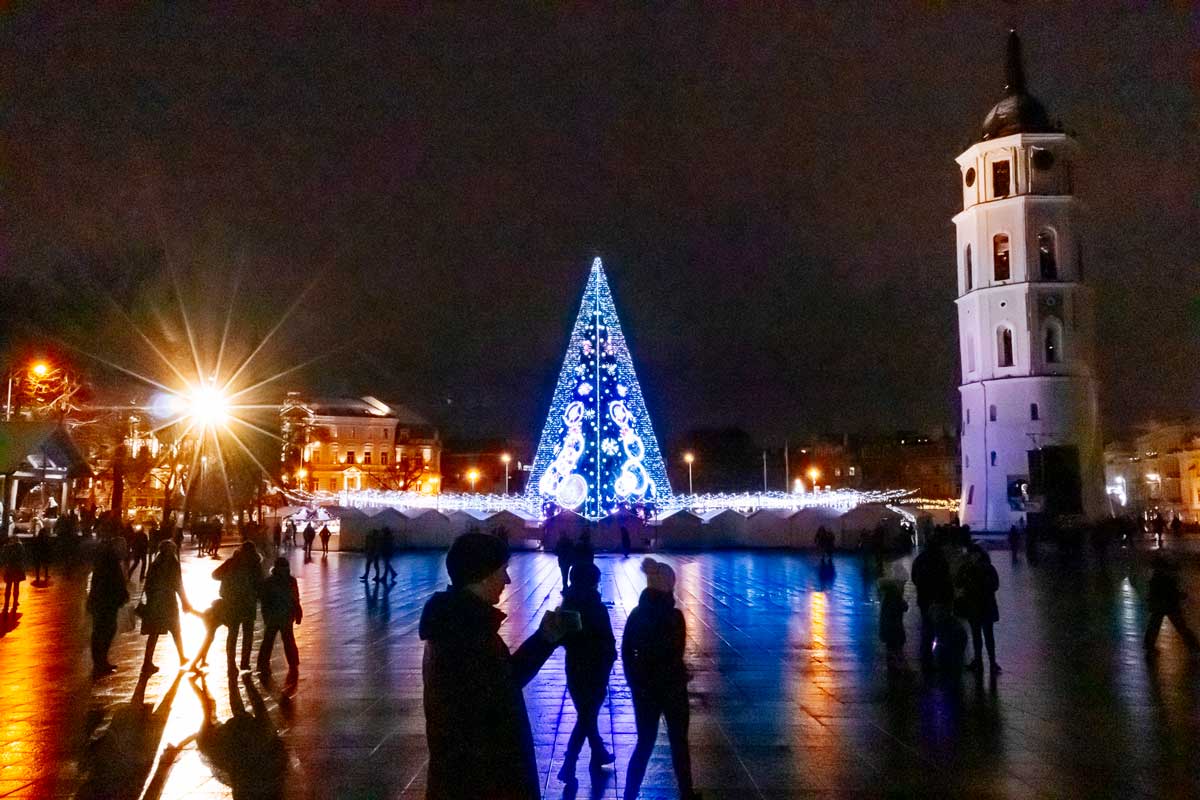 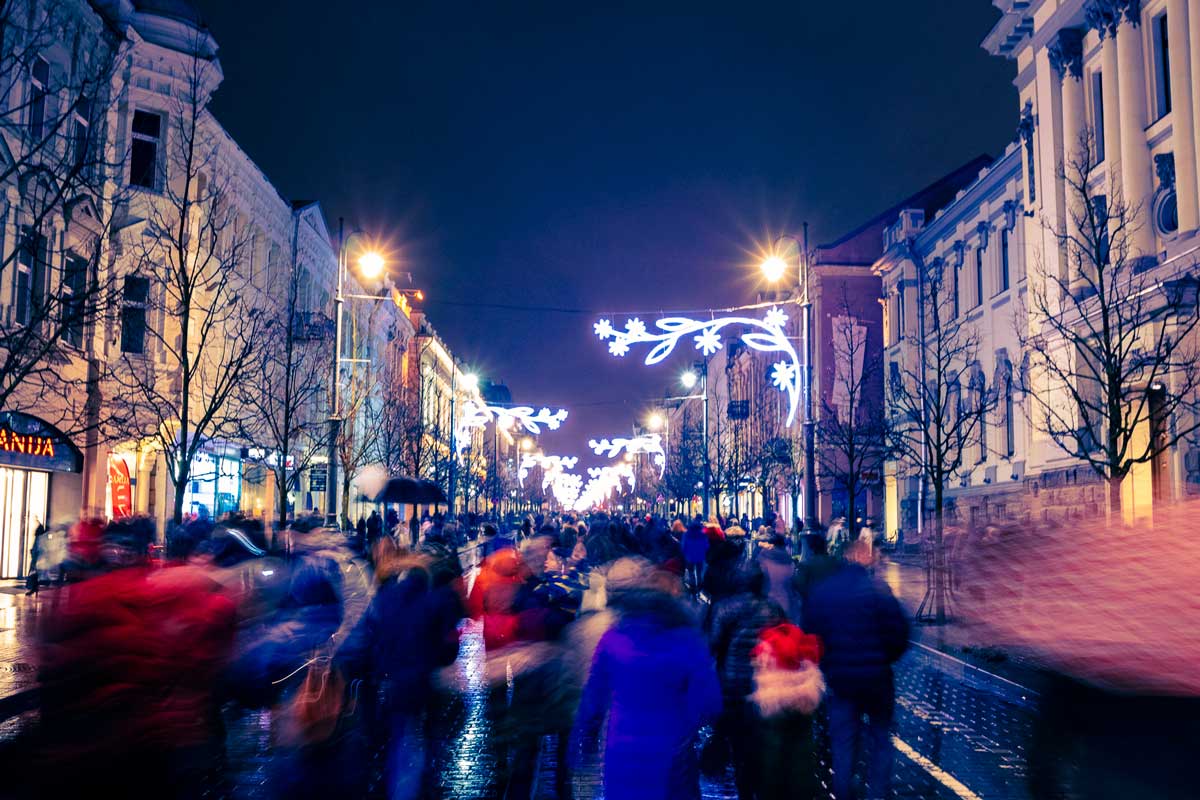 There’s more holiday cheer in Vilnius than just the main Christmas market. Head east from Cathedral Square and you’ll be on Gediminas Avenue, the main street of Vilnius with many places to shop and dine.

Or, head south from Christmas market along Pilies Street, one of the more popular streets in Vilnius’ Old Town. It’s an easy walk and you’ll pass many shops and restaurants on your way to the second Christmas market. Or, you can take the Christmas train. 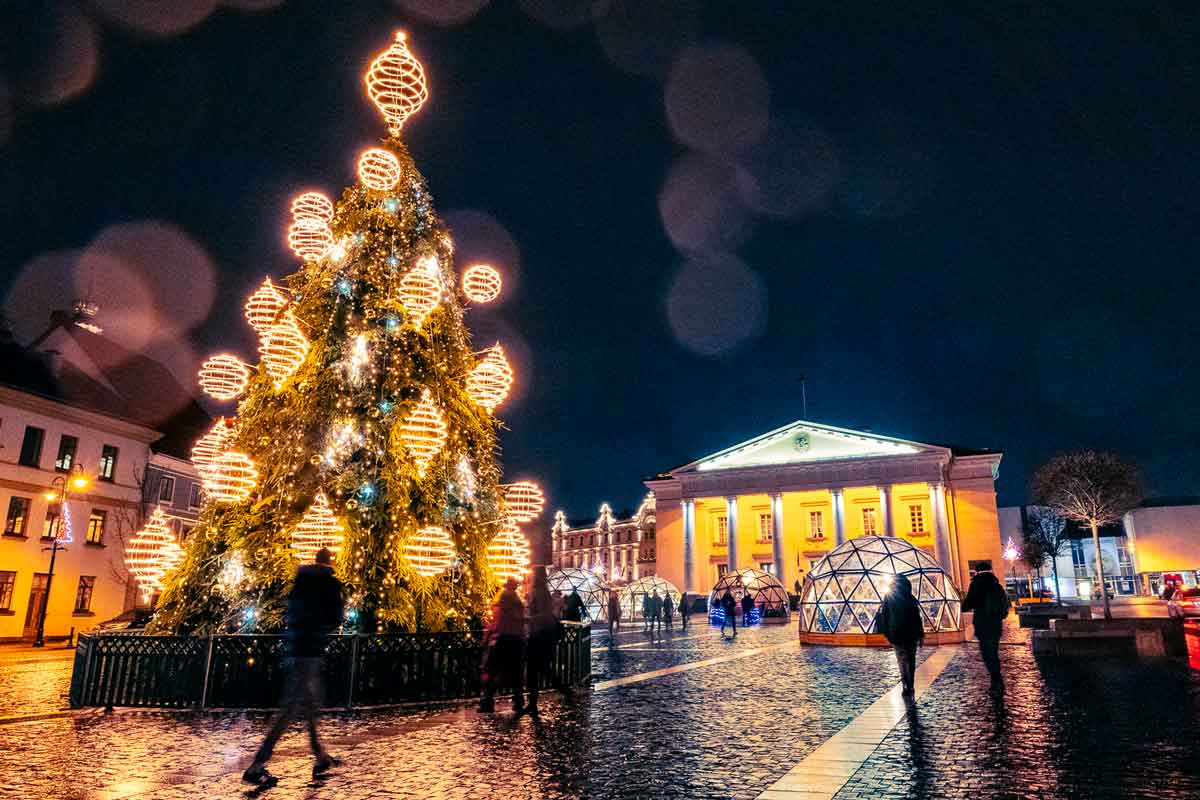 The second Christmas market, in front of the Old Town Hall, is smaller. 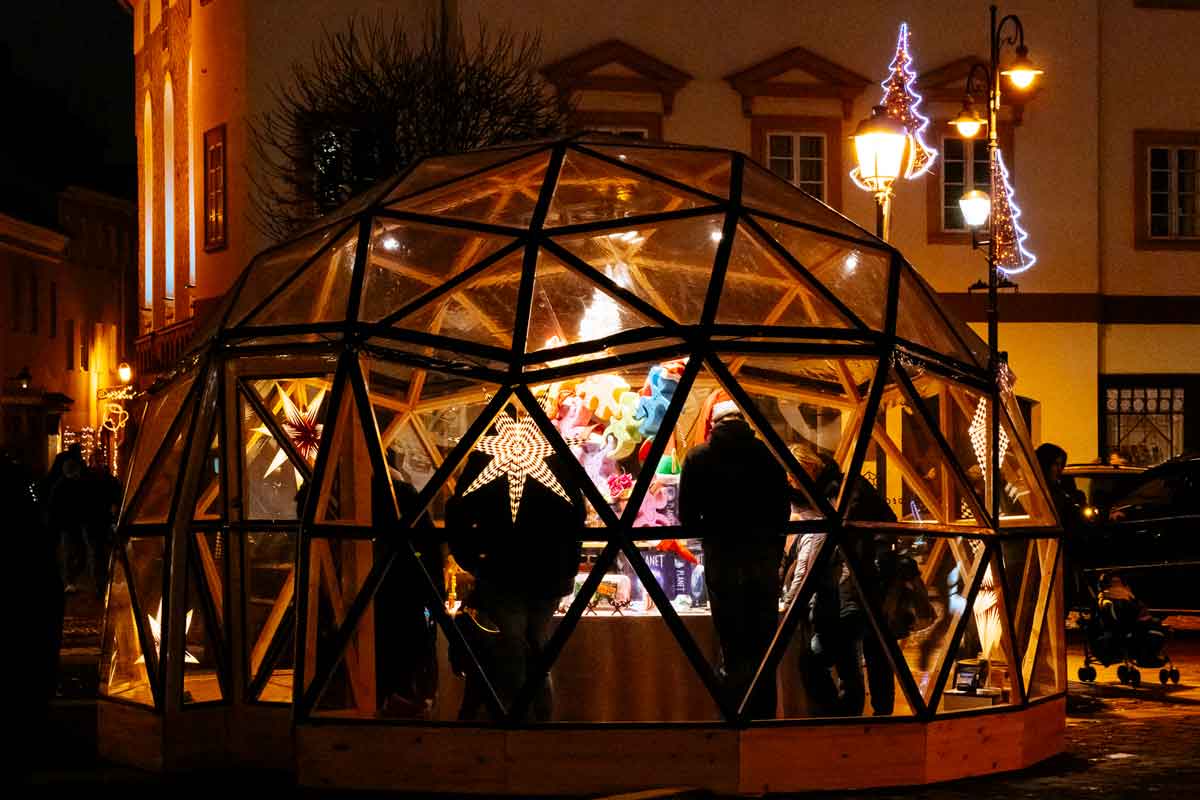 Instead of booths, the vendors at the second market use geodesic domes to sell their wares, which include toys, food and beverages.

Beyond the Christmas markets

The Christmas markets are best seen at night (which begins around 4 pm in Vilnius in December) so that you can enjoy the beautiful lights. Then what to do during the short daylight hours? Easy ~ that’s the perfect time to explore other parts of Vilnius.

The Republic of Uzupis

A dog has the right to be a dog.
A cat is not obliged to love its owner, but must help in time of need.

These are but two of the 41 items of the constitution of the Republic of Uzupis. 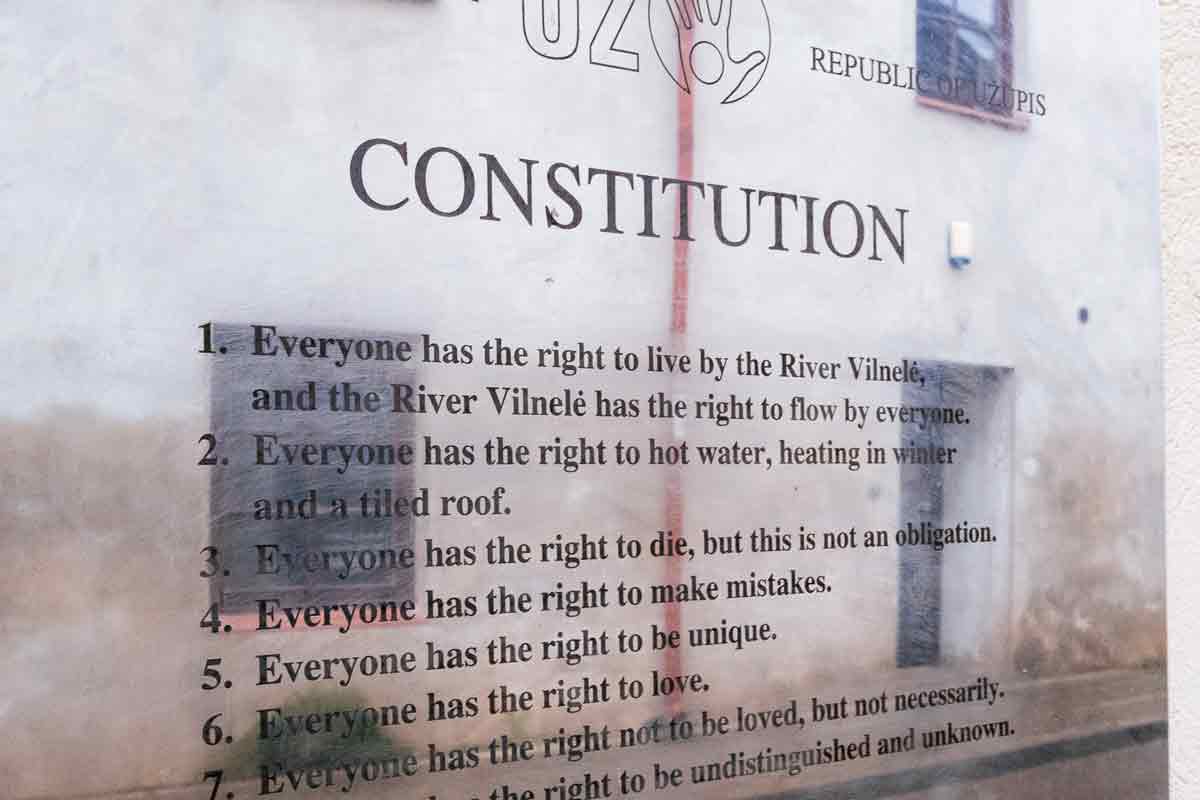 The constitution of Uzupis is translated into over 20 languages and displayed prominently for all to see. The full text is included at the end of this post.

What is the Republic of Uzupis?

Uzupis, meaning “the other side of the river,” is a small neighborhood in Vilnius. After WWII, the neighborhood was mostly abandoned and eventually became a place for the homeless, prostitutes, artists and bohemians. On April 1, 1997, the residents declared the area to be the “Republic of Uzupis,” complete with flags (one for each season), unofficial currency, president, cabinet of ministers, a constitution, an anthem, and an army of approximately 11 men (the army has since been retired). 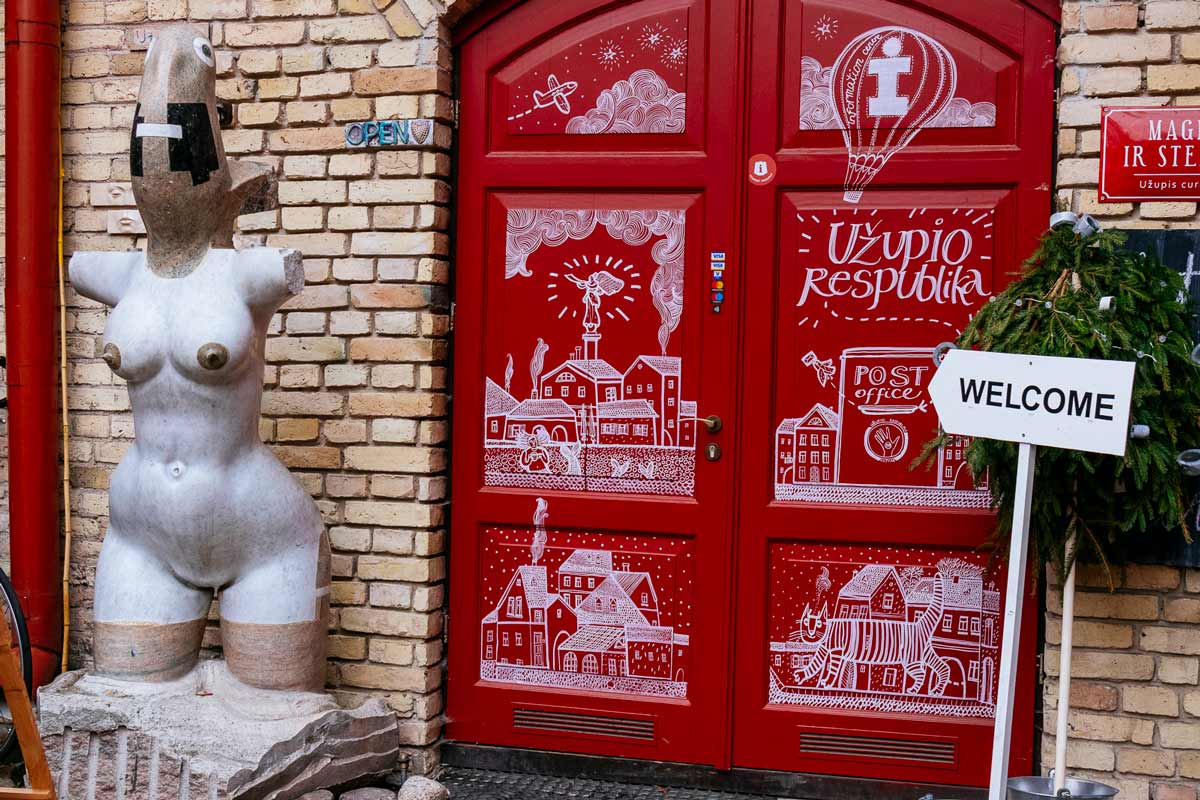 Uzupis is now primarily a destination for artists and tourists. Go through these doors and you’ll find a gift shop and the “official” Uzupis welcome center, where you can have your passport stamped. We sure did. 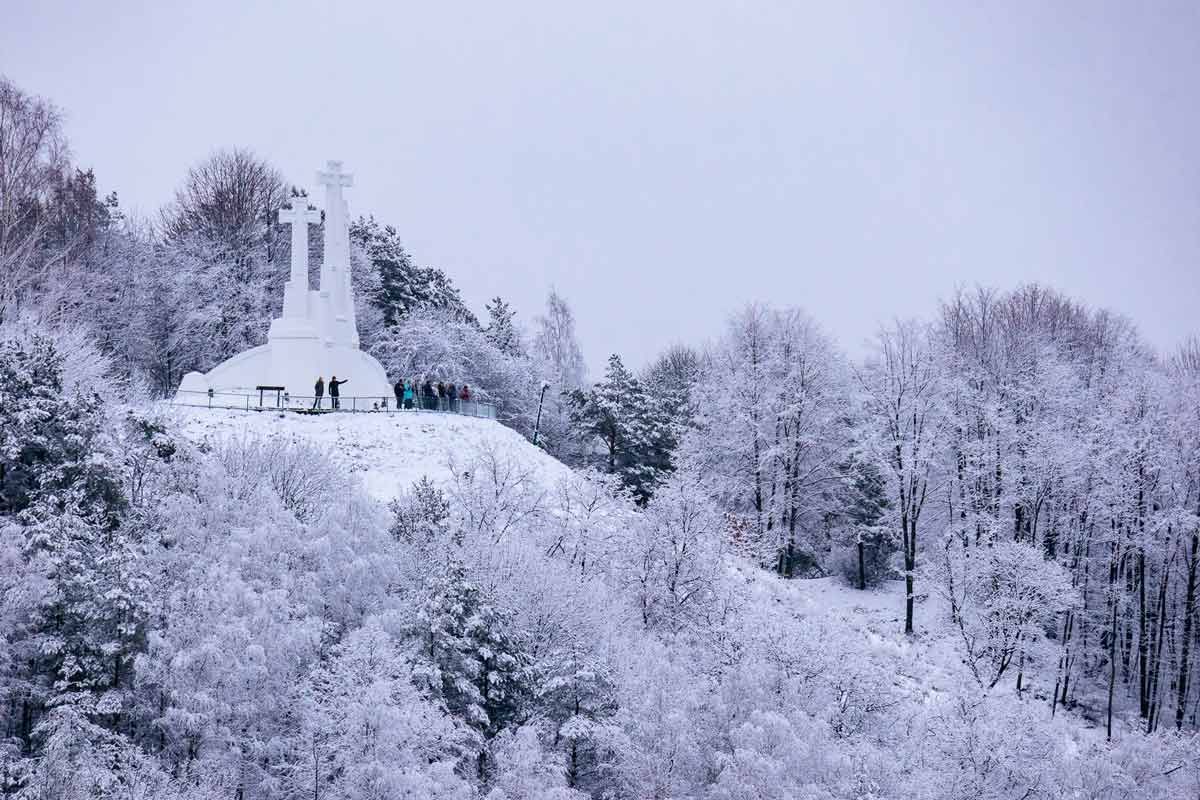 The Three Crosses has become one of the symbols of the city. This monument is dedicated to seven Franciscan friars who were, according to legend, beheaded atop this hill sometime prior to the 16th century. The original wooden crosses were built before 1649 and collapsed in 1869. Due to Tsarist authorities, German (WWI) authorities, the Nazis and the Soviets, the monument has been rebuilt and destroyed several times. The current monument was unveiled in 1989.

The Three Crosses monument offers a great view of Gediminas Tower (right), the Palace of the Grand Dukes, the bell tower, the Christmas market (center) and Vilnius Old Town. 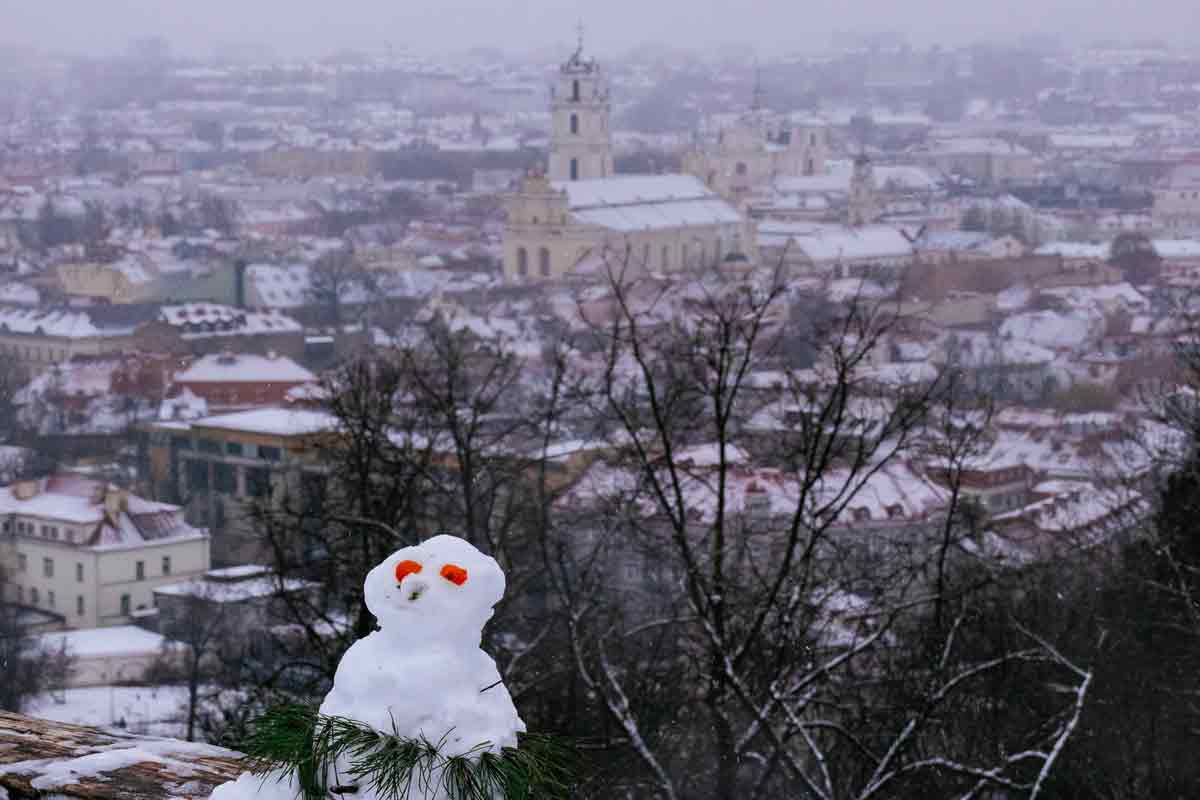 We climbed up the hill to the Three Crosses in a snowstorm. This friendly snow person was there to greet us. 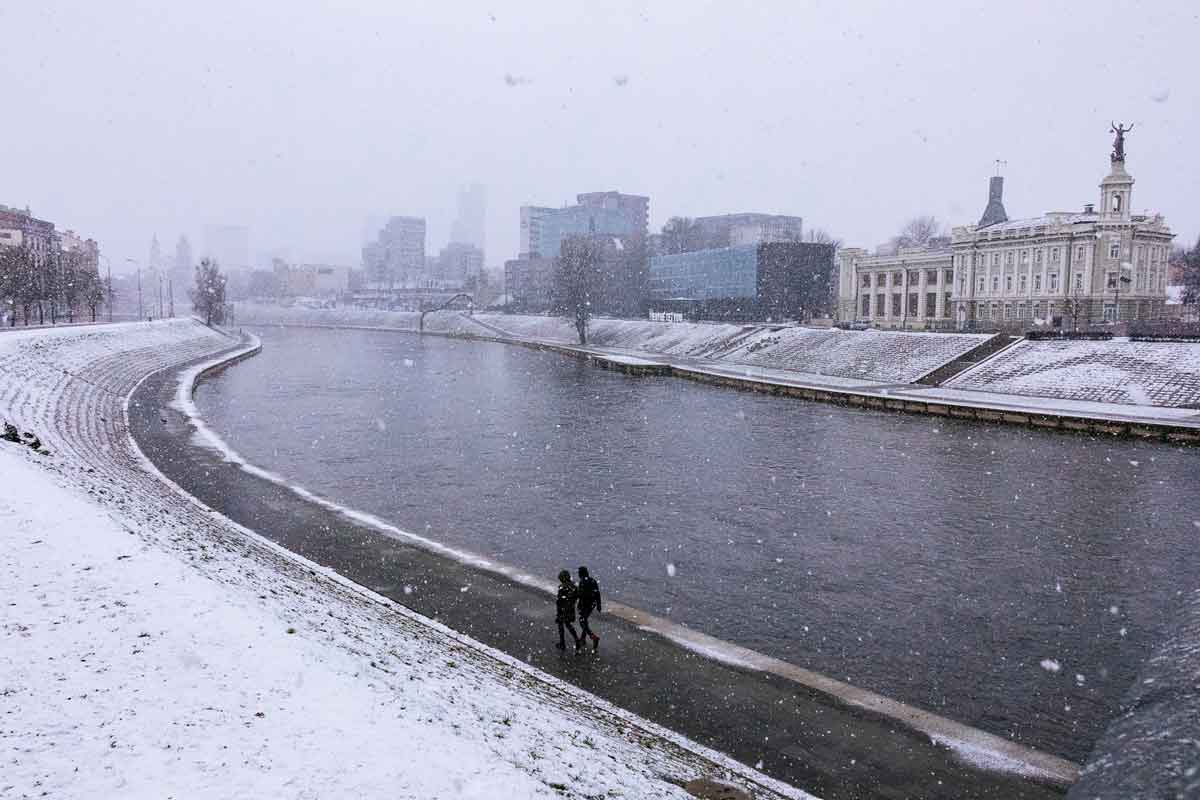 The river Neris flows through Vilnius. According to one of our tour guides, in the Lithuanian language, the root of the country’s name is related to the Lithuanian word for rain. Which, according to our guide, is appropriate because in Lithuania every single day of the year there is a chance it will rain. Or snow. 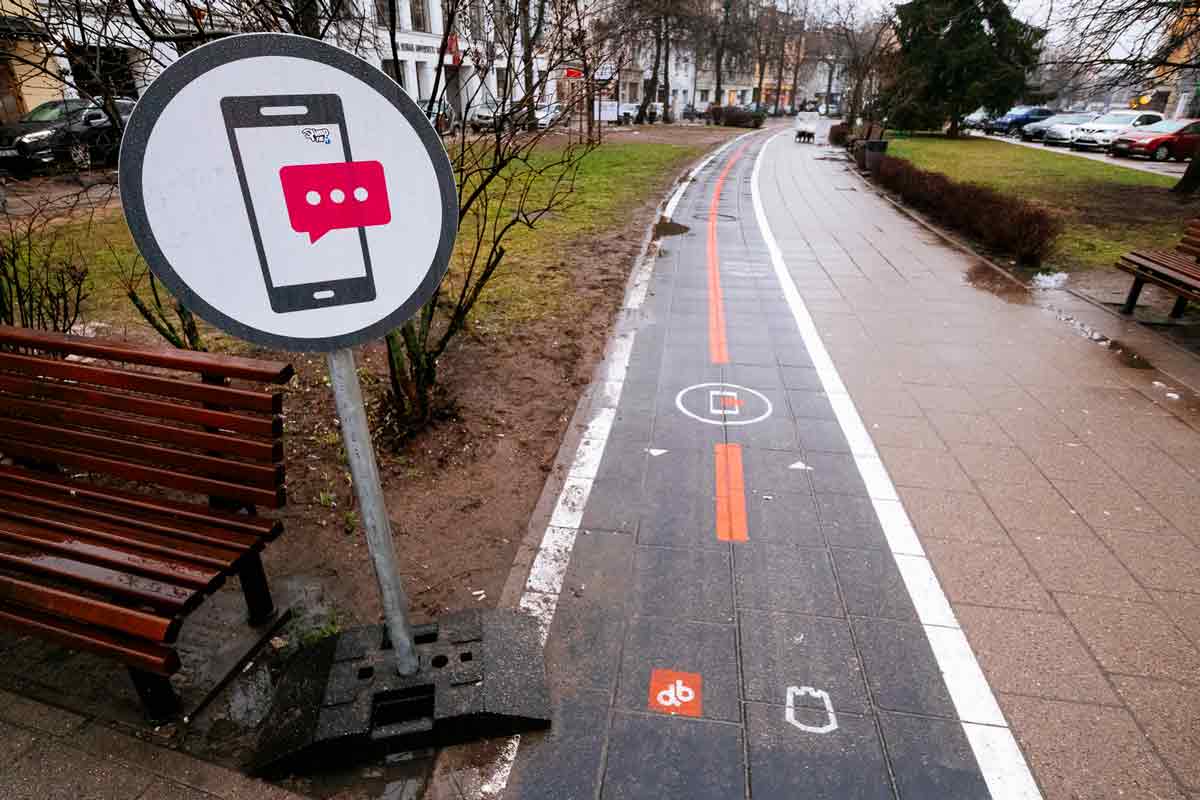 Instead of a bike lane, this lane is dedicated to people who are texting while walking. 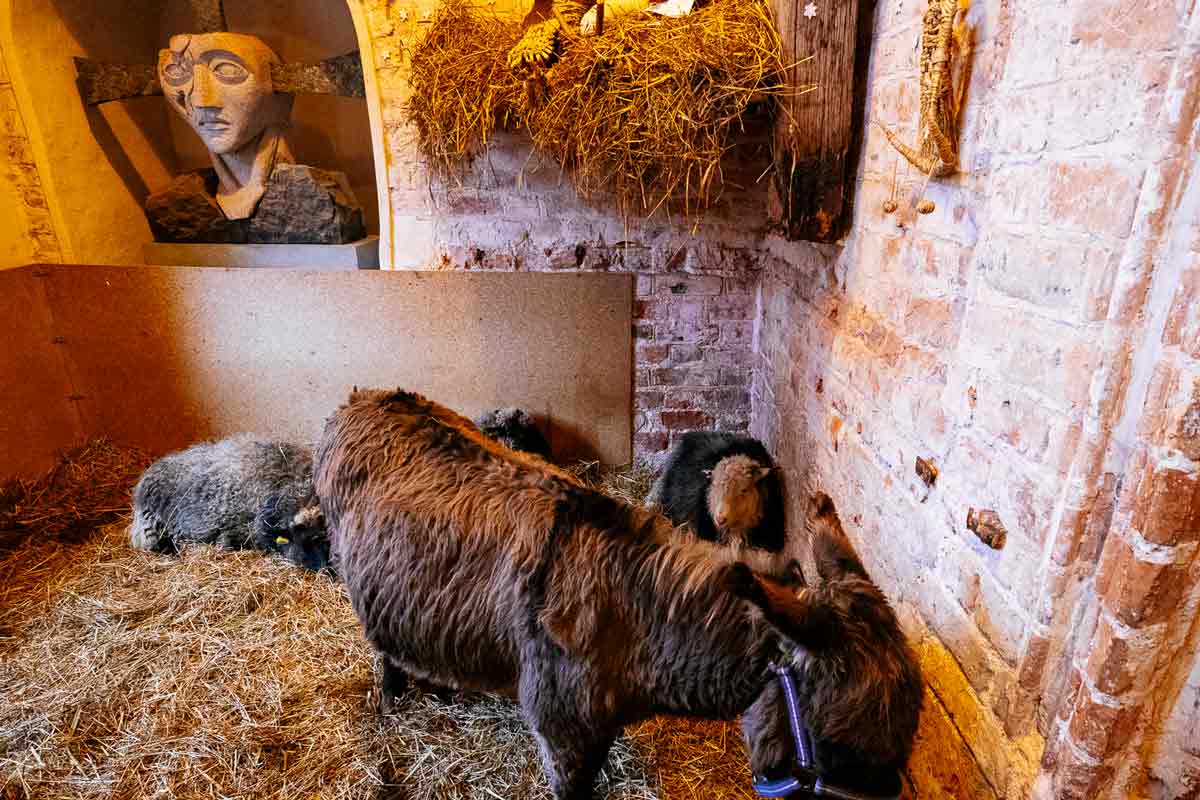 In an effort to make the birth of Jesus come to life, one church converted their entryway into a stable, complete with livestock.

I’ve mentioned Gediminas a couple of times already (Gediminas Avenue, Gediminas Tower) so you might be wondering who he was.

The short version is: Gediminas was born around 1275 and was the Grand Duke of Lithuania from about 1315 until his death in 1341. He is regarded as the “true” founder of Lithuania, the founder of Vilnius and an inspiration to the Romantic Movement of the first part of the 19th century. 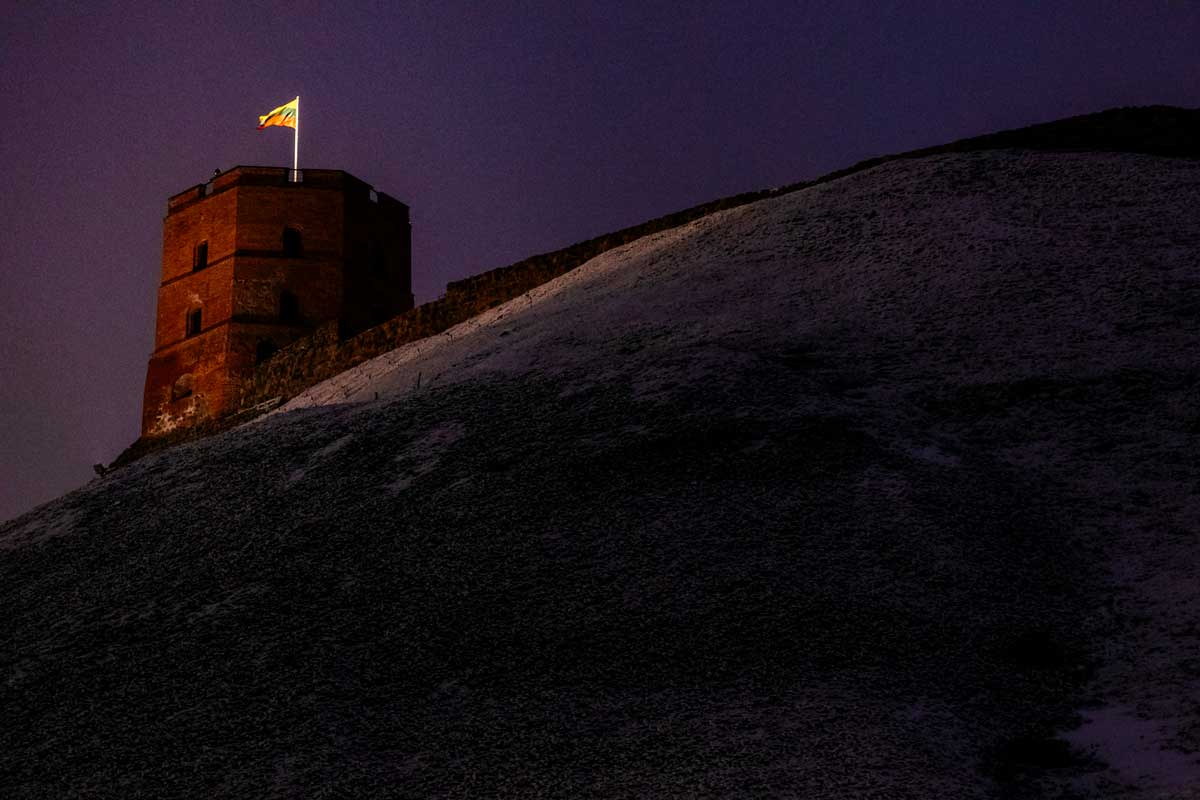 According to legend, Gediminas had a dream about a large iron wolf on the top of a hill. A mage interpreted the dream to mean that Gediminas should build a city around that hill. As part of the city, Gediminas built a castle on the hill from the dream. The original castle was wooden and later replaced with brick construction. Today, this brick tower is all that remains. 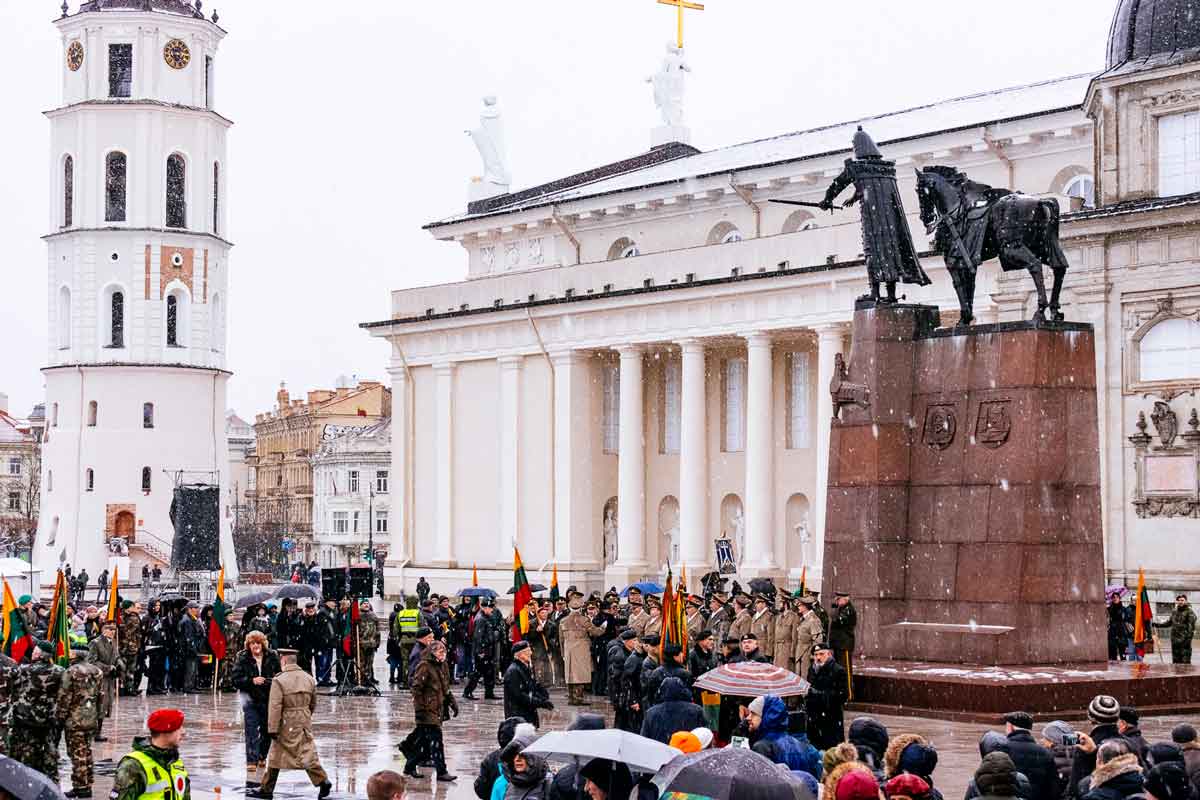 The statue of Gediminas in Cathedral Square is a focal point for many events, including this choral concert by the Lithuanian military. 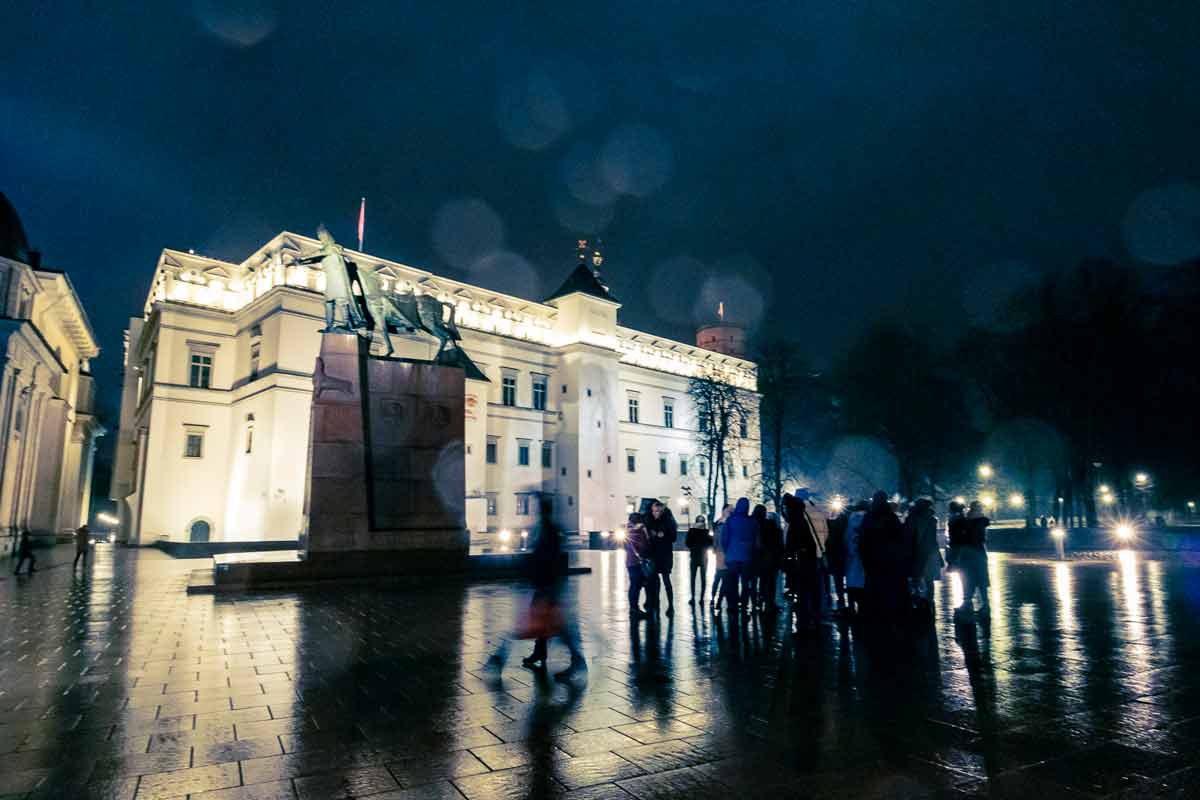 Even on a rainy night, tour groups stop by the statue of Gediminas. The Palace of the Grand Dukes of Lithuania, in the background, is a reconstruction on the site of the original building and was completed in 2018. 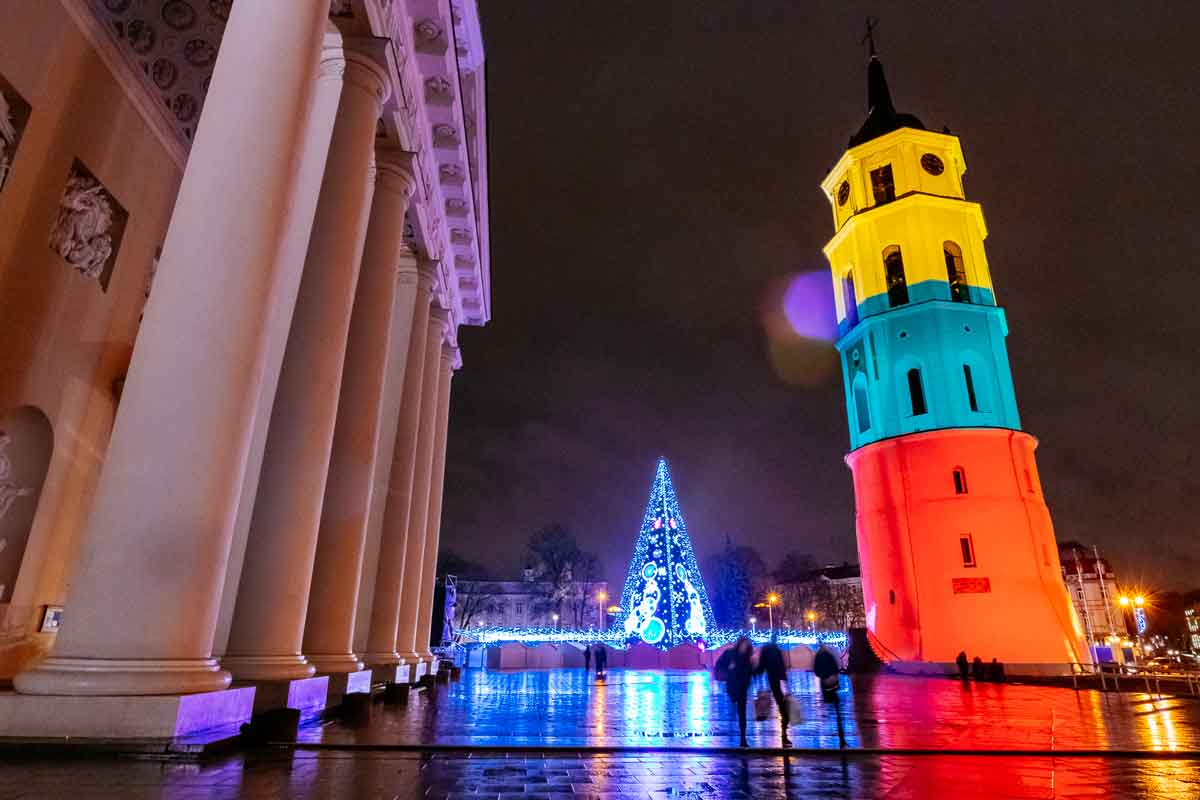 Gediminas’ coat of arms was used as one of the earliest symbols of Lithuania. Today, however, Lithuania is represented by a tricolor flag. On this evening, the bell tower was illuminated with those colors: yellow for sun and prosperity; green for the forests, the countryside, liberty, and hope; and red for the blood and bravery of those who have died for Lithuania3.
(Photographer’s note: The tower and the cathedral do indeed stand straight; the distortion in the photo is caused by the wide angle lens I was using.)

With this trip to Vilnius, we’ve now visited the capital of each of the three Baltic nations. Which one was our favorite? They’re all different, so it’s impossible to choose one over the other. They were all enchanting and we hope to go back to each one ~ but only in the summer.

To read about our visits to the Christmas markets in Riga and Tallinn, the capitals of the other to Baltic Nations, please visit:
Riga’s charming Christmas Market
Tallinn: A Christmas Market in the oldest capital city in northern Europe