November is the month when Poles honor and remember their past: All Saints’ Day, Nov. 1st, All Souls’ Day, Nov. 2nd, and National Independence Day, Nov. 11th.

All Saints’ Day (Dzień Wszystkich Świętych) is a Christian festival honoring all saints, known and unknown. All Souls’ Day (Zaduszki or Dzień Zaduszny) is a Christian day commemorating all the dead.

In Poland, Zaduszki (All Souls’ Day) is one of the most important family holidays. Beginning on the evening of Nov. 1st, families visit the graves of their loved ones, bringing flowers and lighting votives. 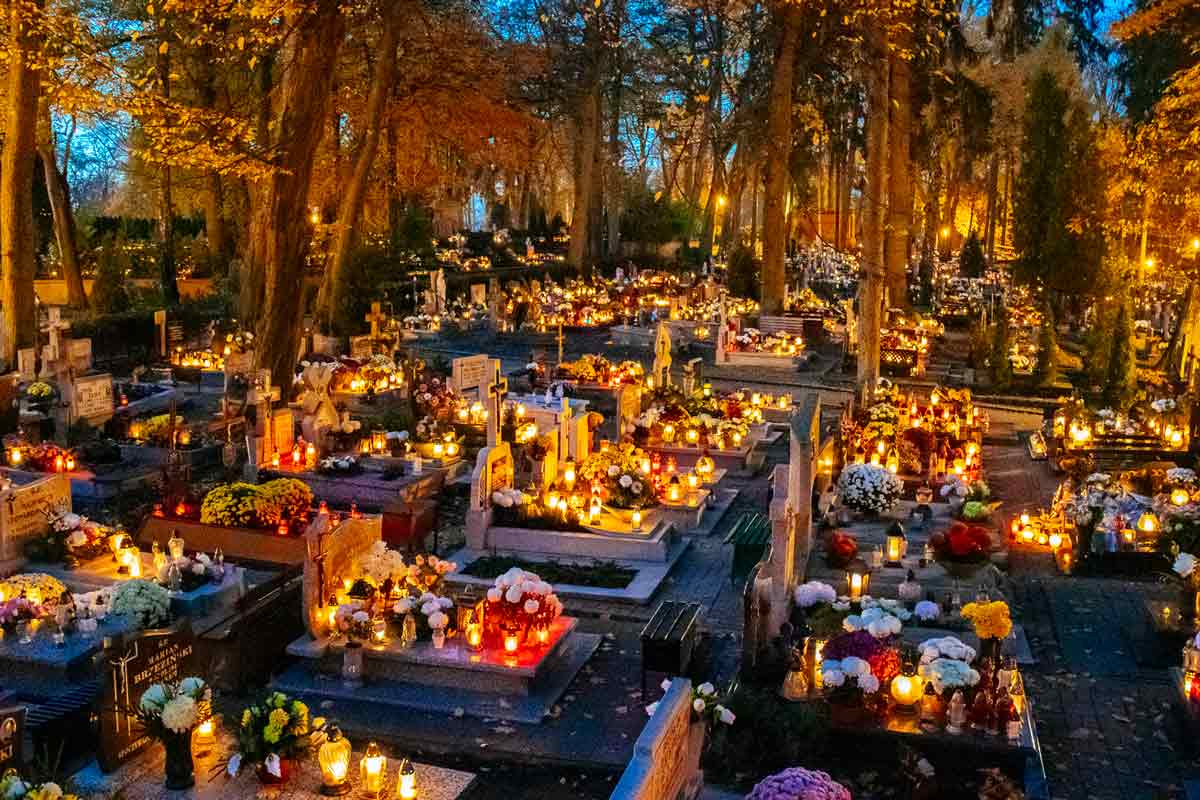 On All Saints’ Day, it seems that every grave has been lovingly decorated with flowers and lights. 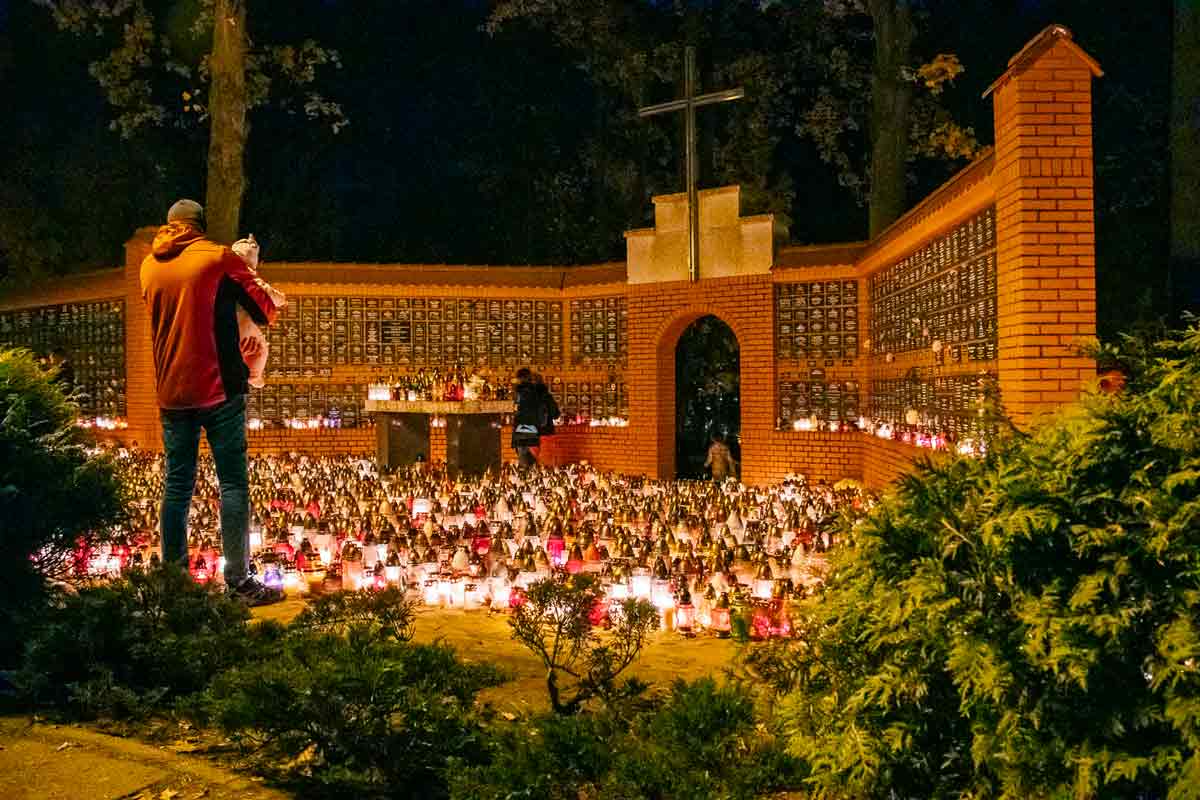 Those without a grave are also remembered, as the Columbarium is decorated with hundreds of votives. 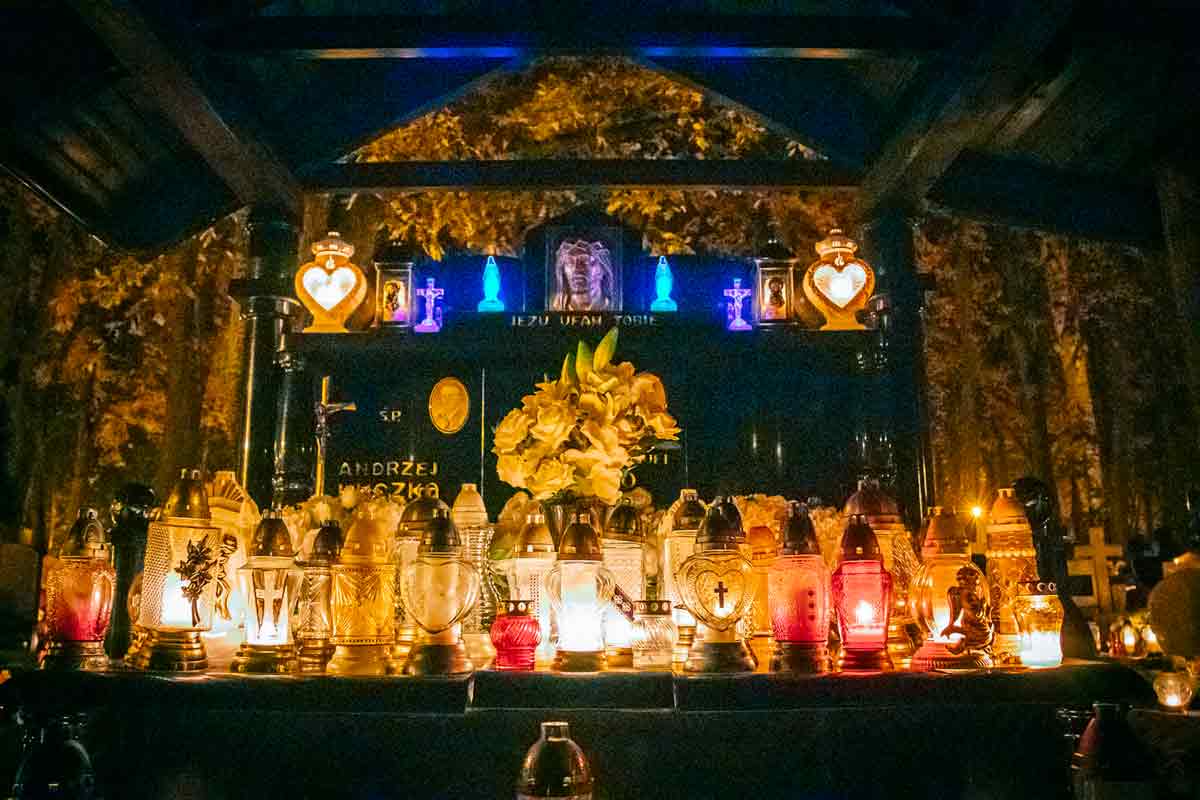 Some of the graves even incorporate roofs. 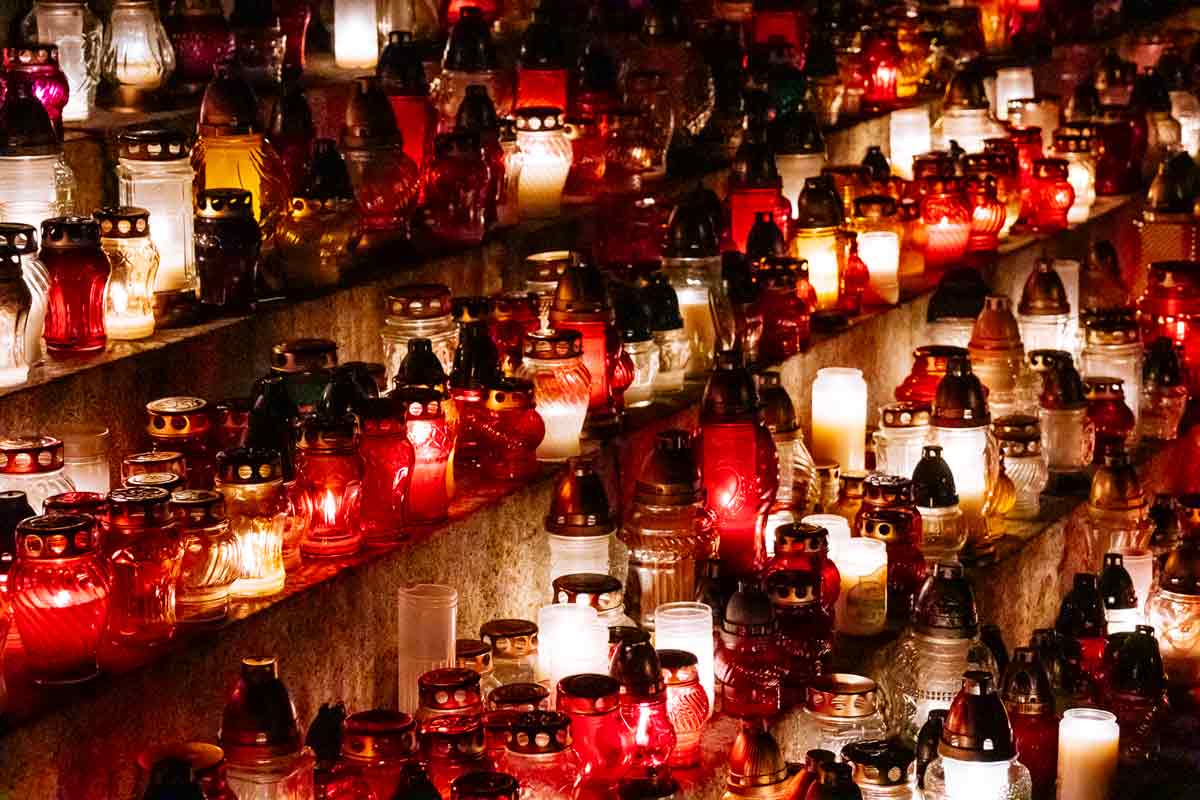 Steps leading to memorials are covered with votives. 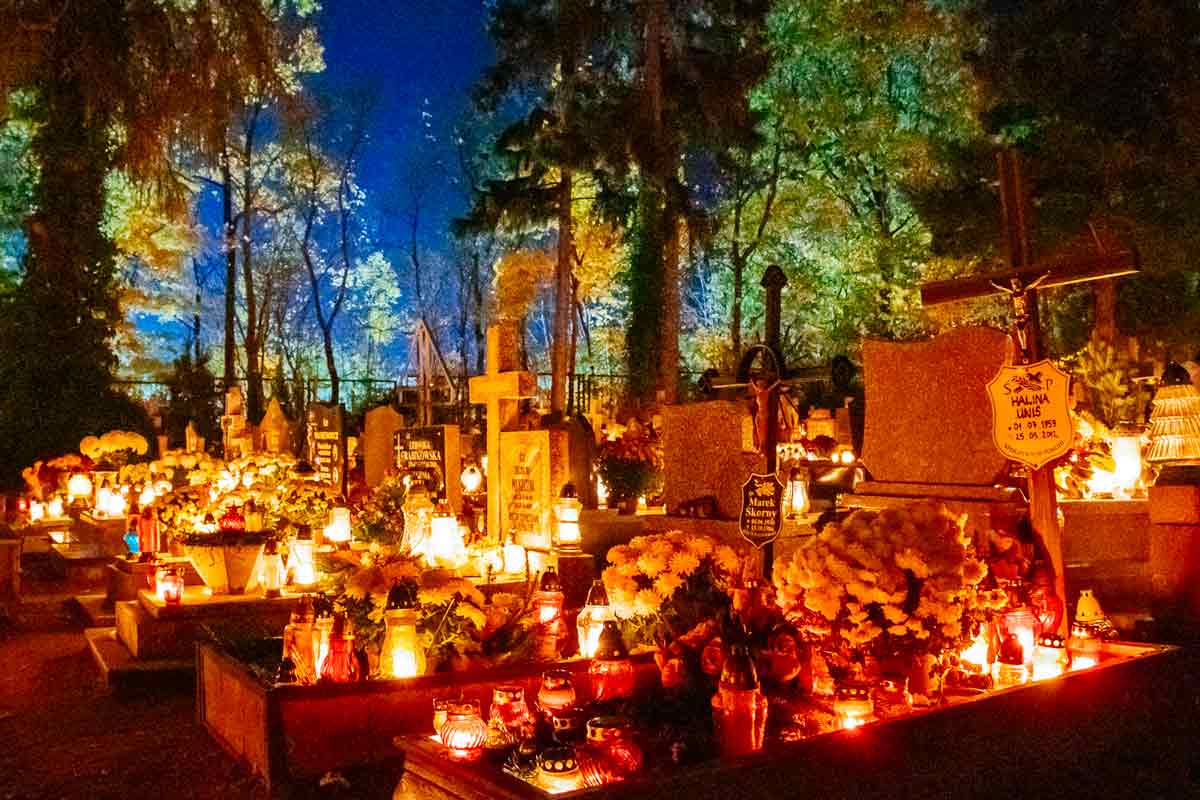 Flowers also decorate the graves. Chrysanthemums are the flower traditionally associated with All Saints’ Day in Poland. 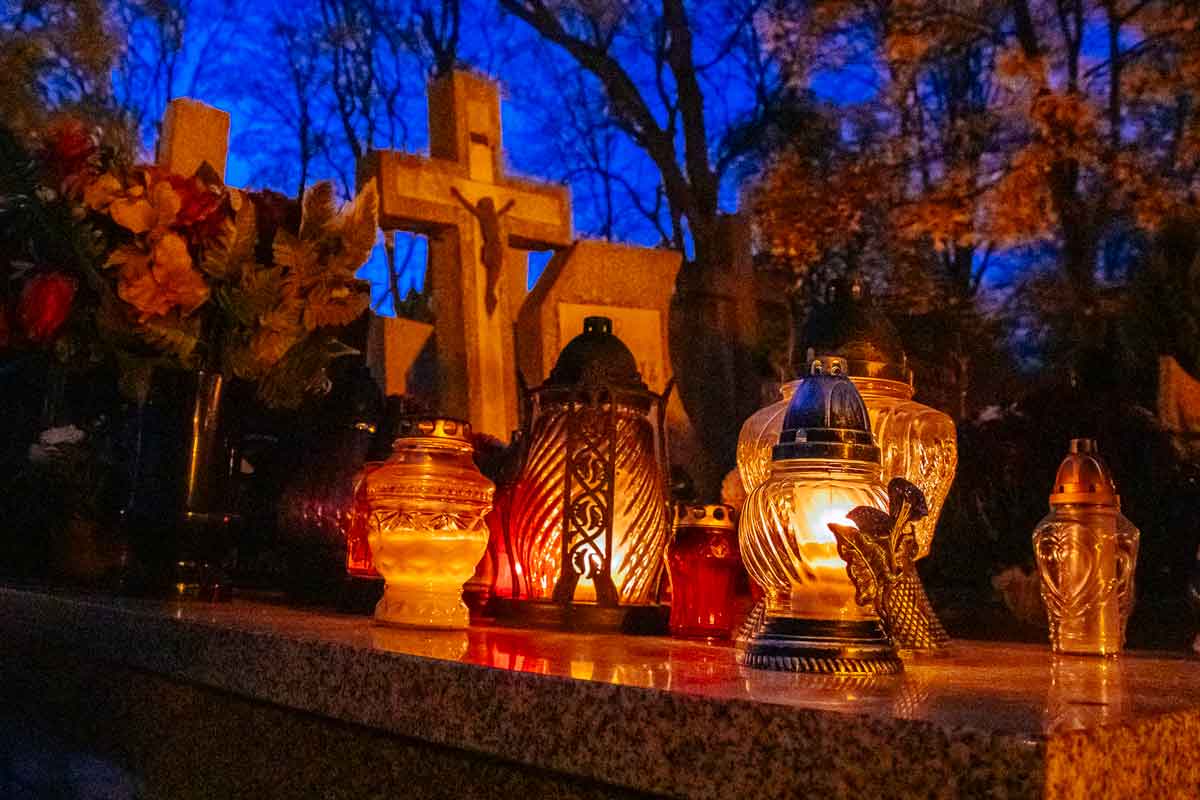 Votives come in many shapes and sizes.

In the late 18th century, Poland was partitioned by the Habsburg Empire, the Kingdom of Prussia and the Russian Empire, ceasing to exist as a sovereign nation. National Independence Day (Narodowe Święto Niepodległości) celebrates the restoration of Poland as a nation following the defeat of the German, Austrian and Russian empires in WWI. 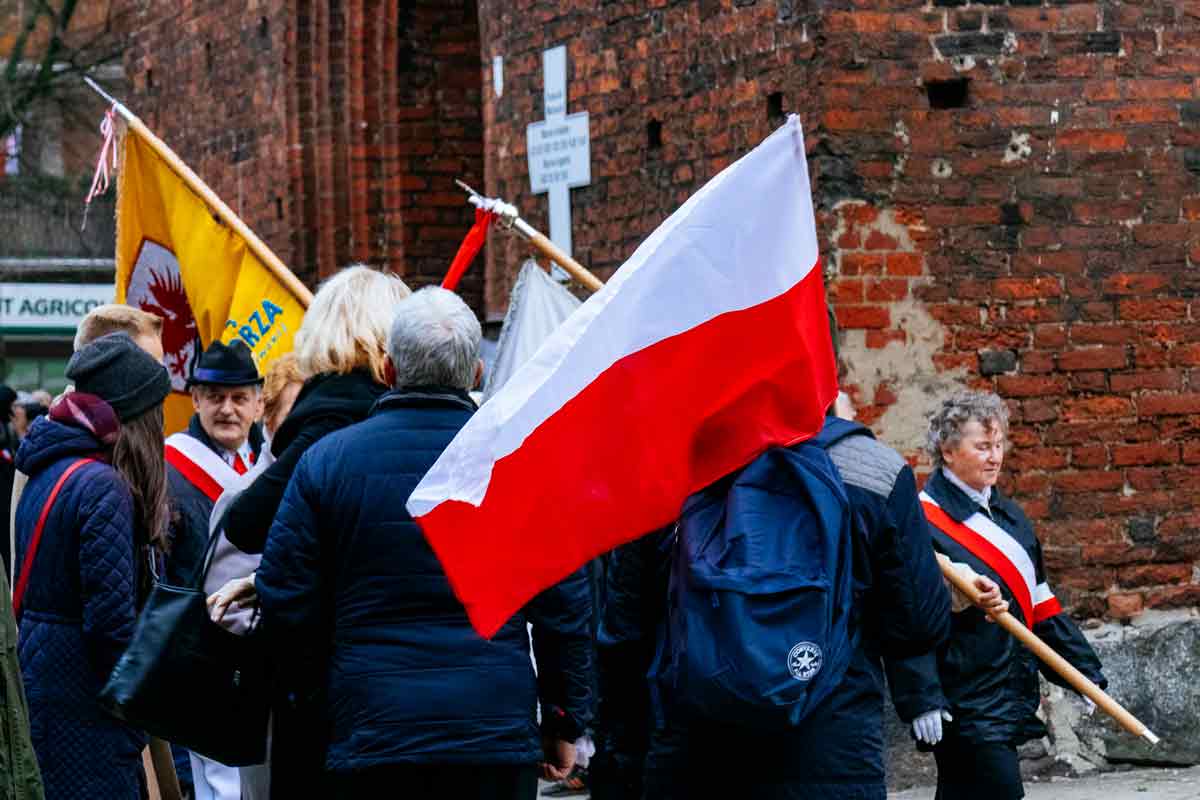 After a Holy Mass for the Homeland, local dignitaries leave the church and line up to parade to Victory Square. 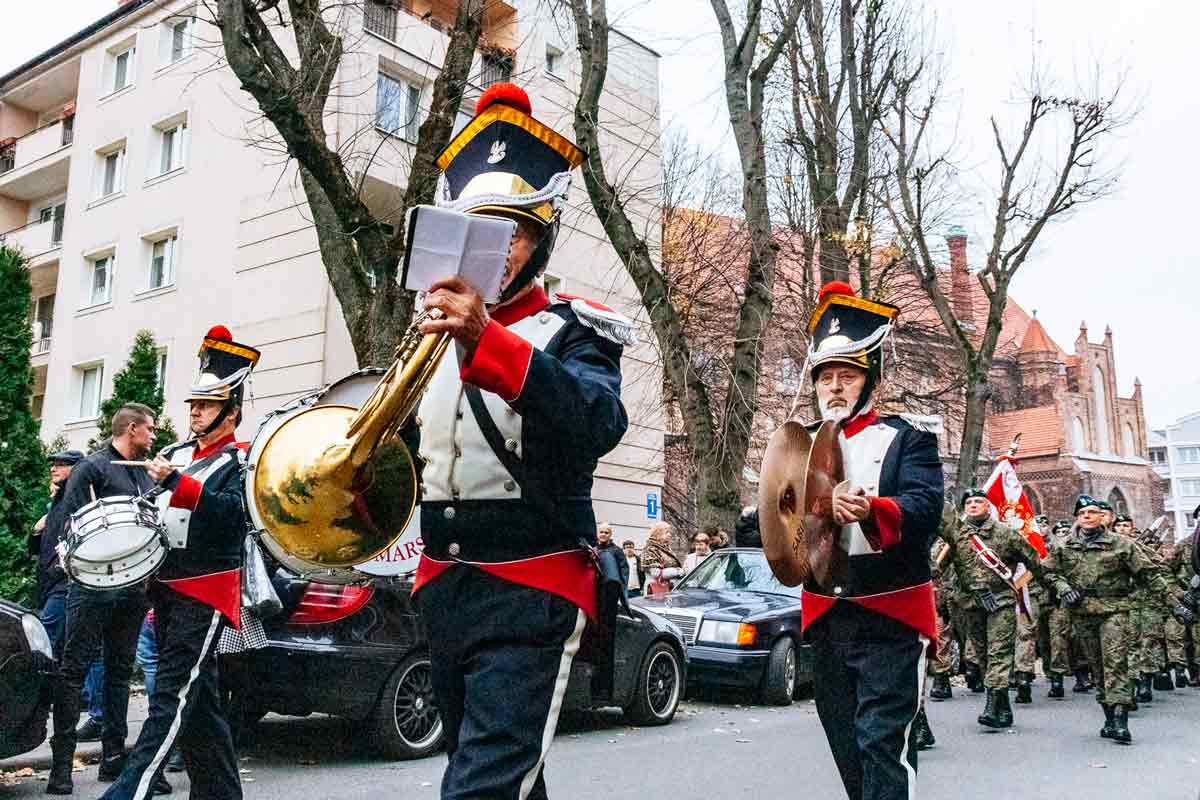 A marching band led the parade. 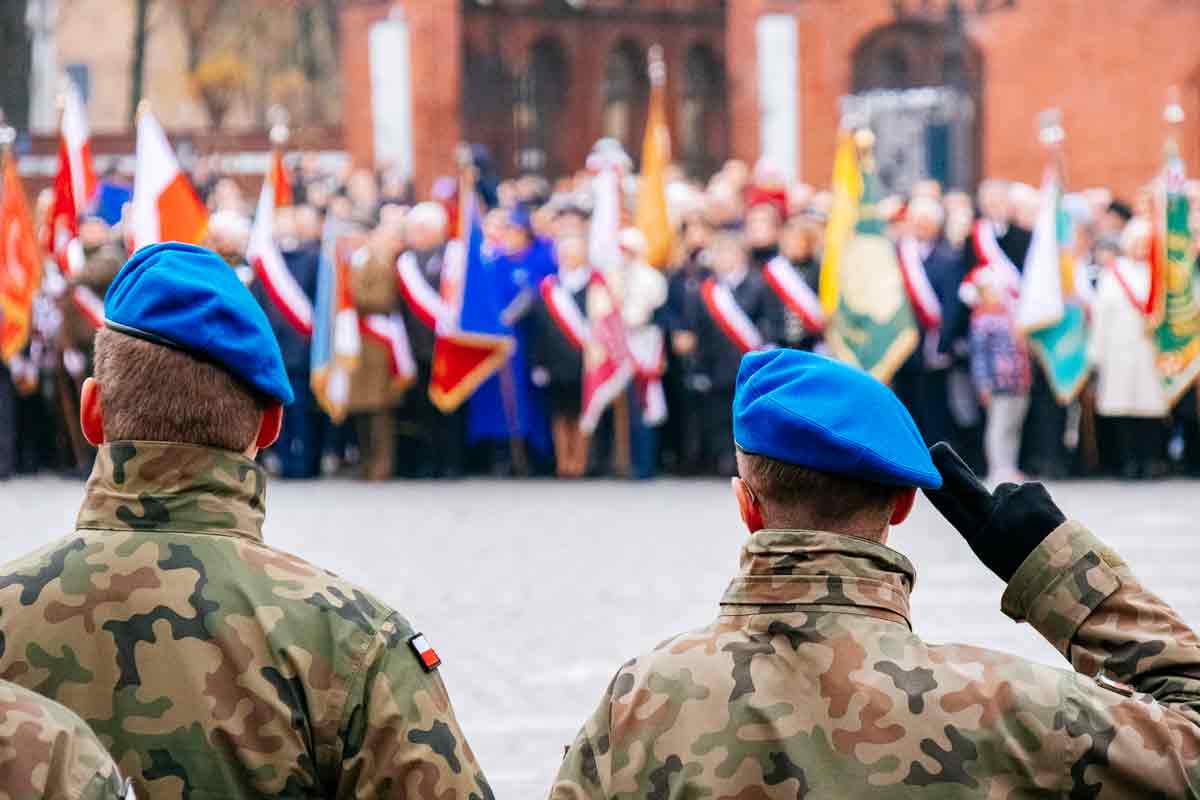 The parade ended in Victory Square, where the participants formed a horseshoe around the Victory Monument. One unit of the local army garrison was across the square from the local dignitaries. 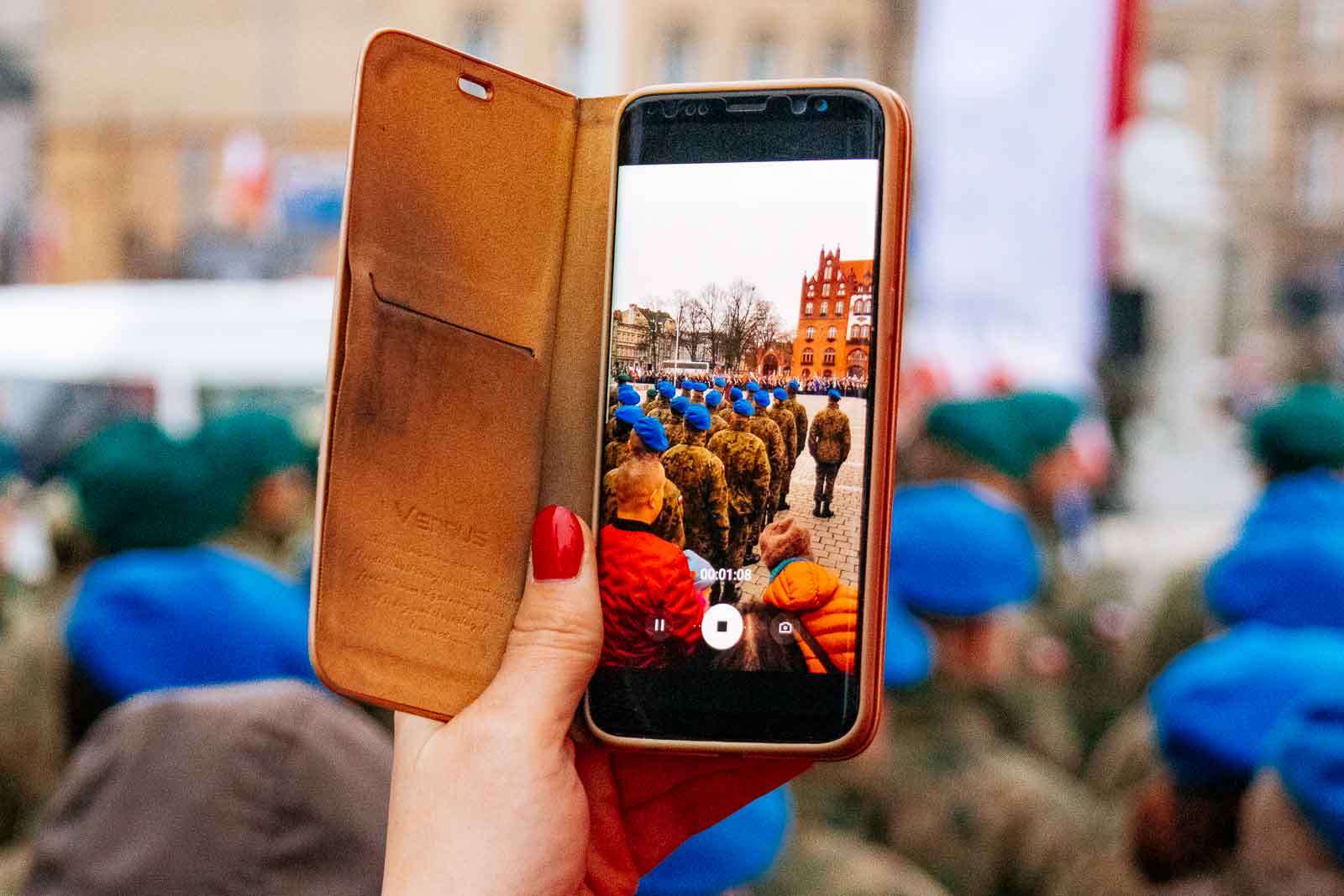 For some, the best way to see over the crowd of spectators was with the help of an iPhone. 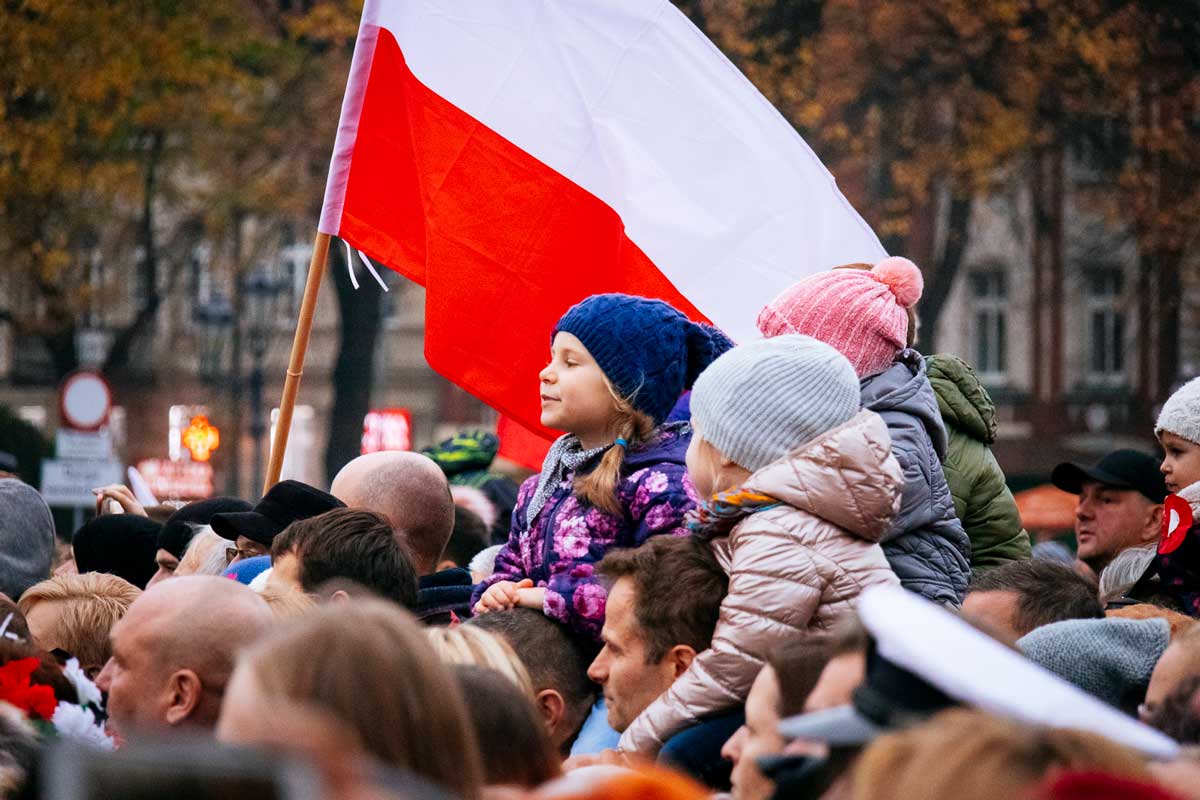 For others, Dad provided a better seat.

After the presentation of all the ceremonial wreaths, a historical reenactment was staged. This reenactment told the story of Poland from before the partitions of the 1790s to the end of WWI. There wasn’t a playbill at the event, so in the following captions I will describe the events as best I can based on my limited knowledge of Polish history. 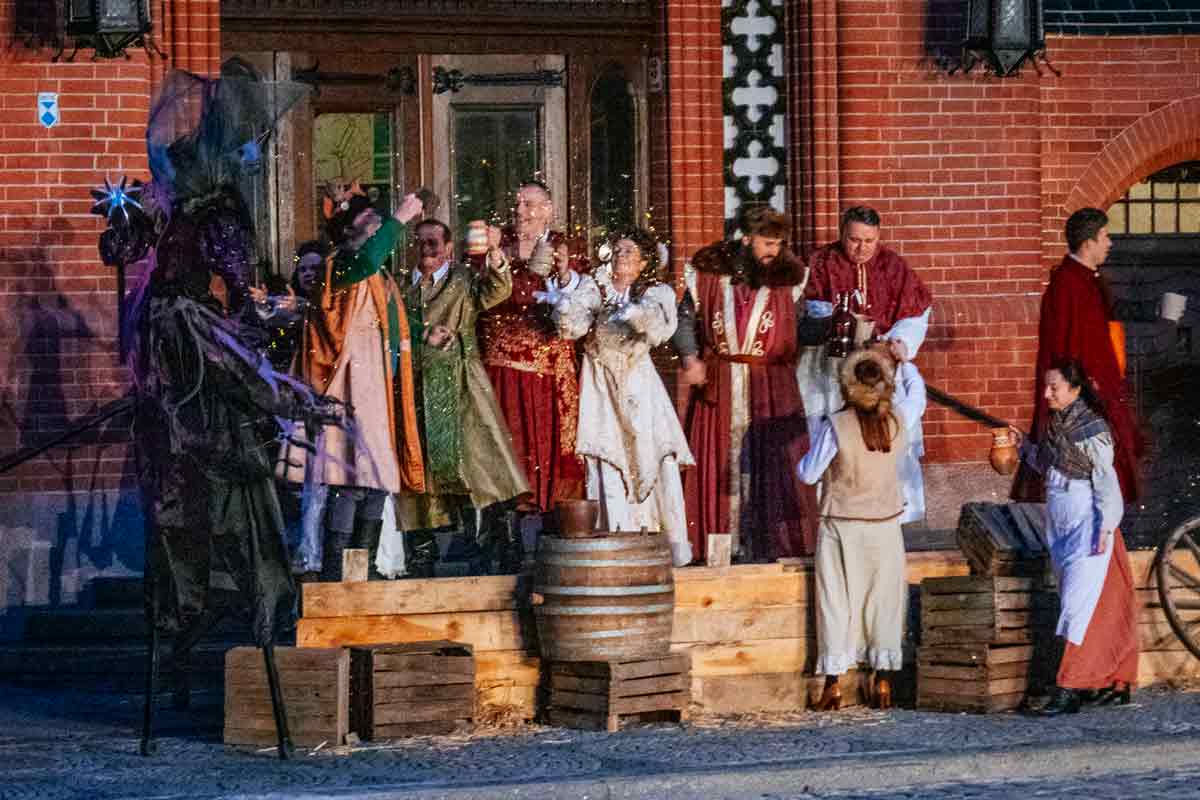 Before the May 3rd, 1791 constitution, the Polish-Lithuanian Commonwealth (represented by the actors with the mugs) enjoyed relatively friendly relations with its larger neighbors, Russia, Prussia and the Habsburg Empire. 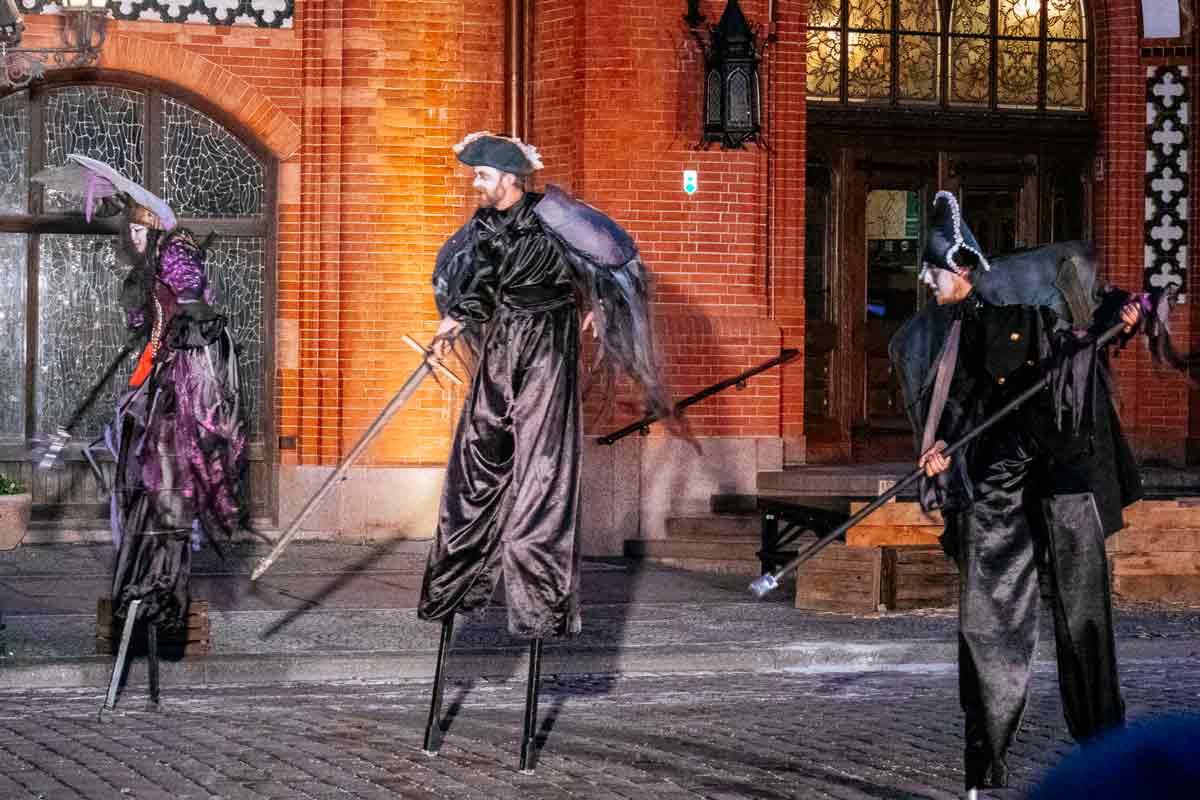 After the May 3rd constitution, Poland’s larger neighbors (the Russian Empire, Prussian Empire and the Habsburg Empire), symbolized by actors in black and on stilts, successfully partitioned Poland, erasing it as a country. 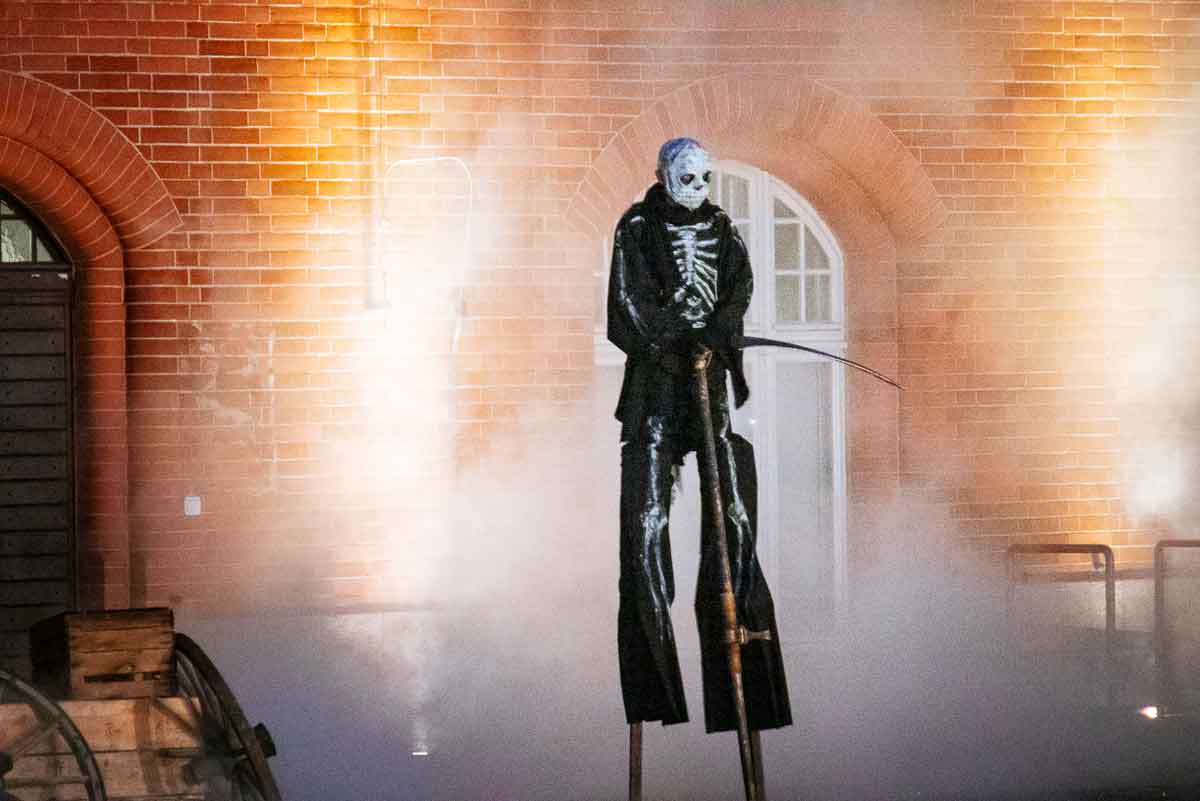 In this dramatic presentation, Poland’s 123 years of dissolution is dramatized by Death, portrayed in black and on stilts, who commands the land. 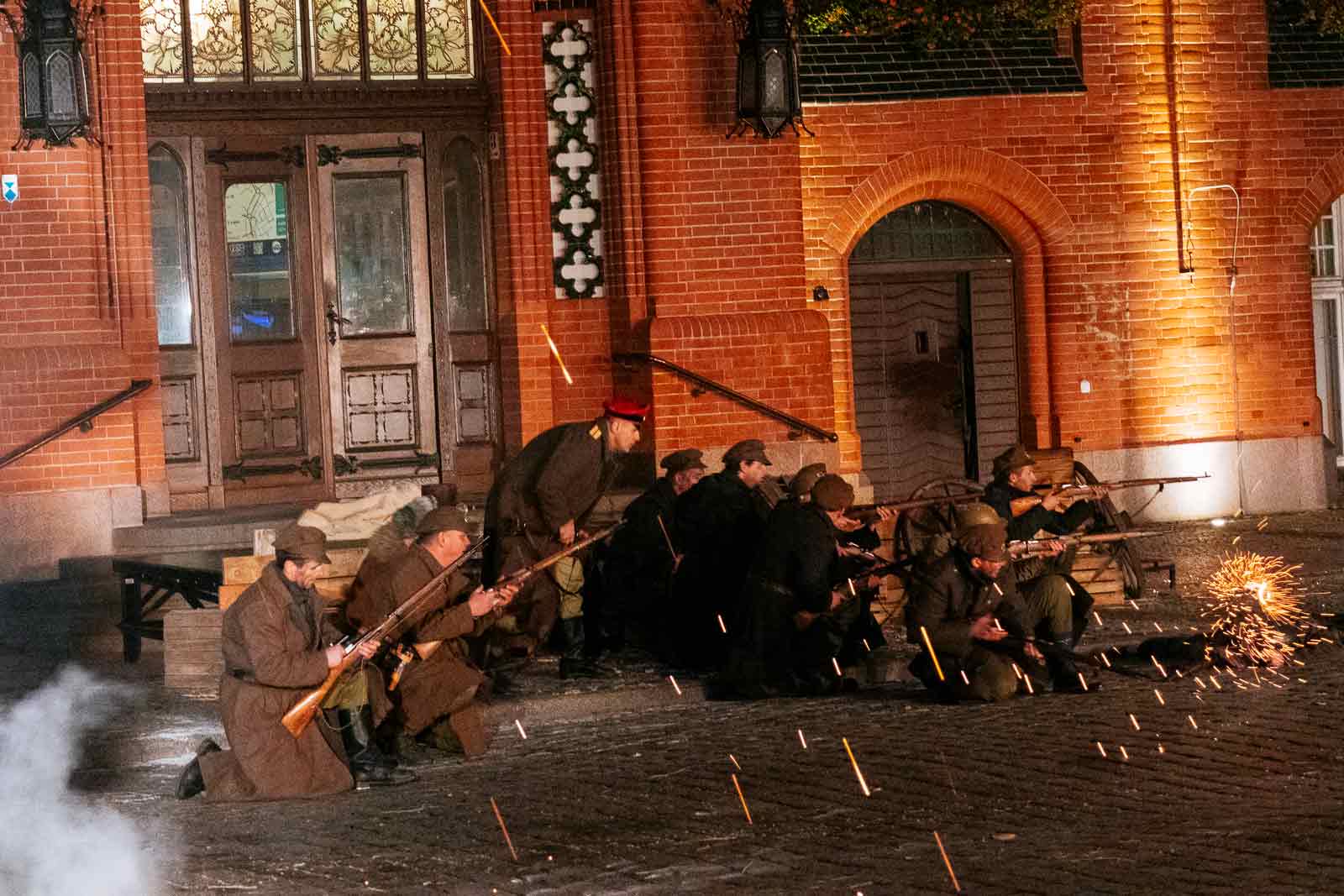 The actors utilized period costumes, props and pyrotechniques to successfully portray the armed resistance during WWI. 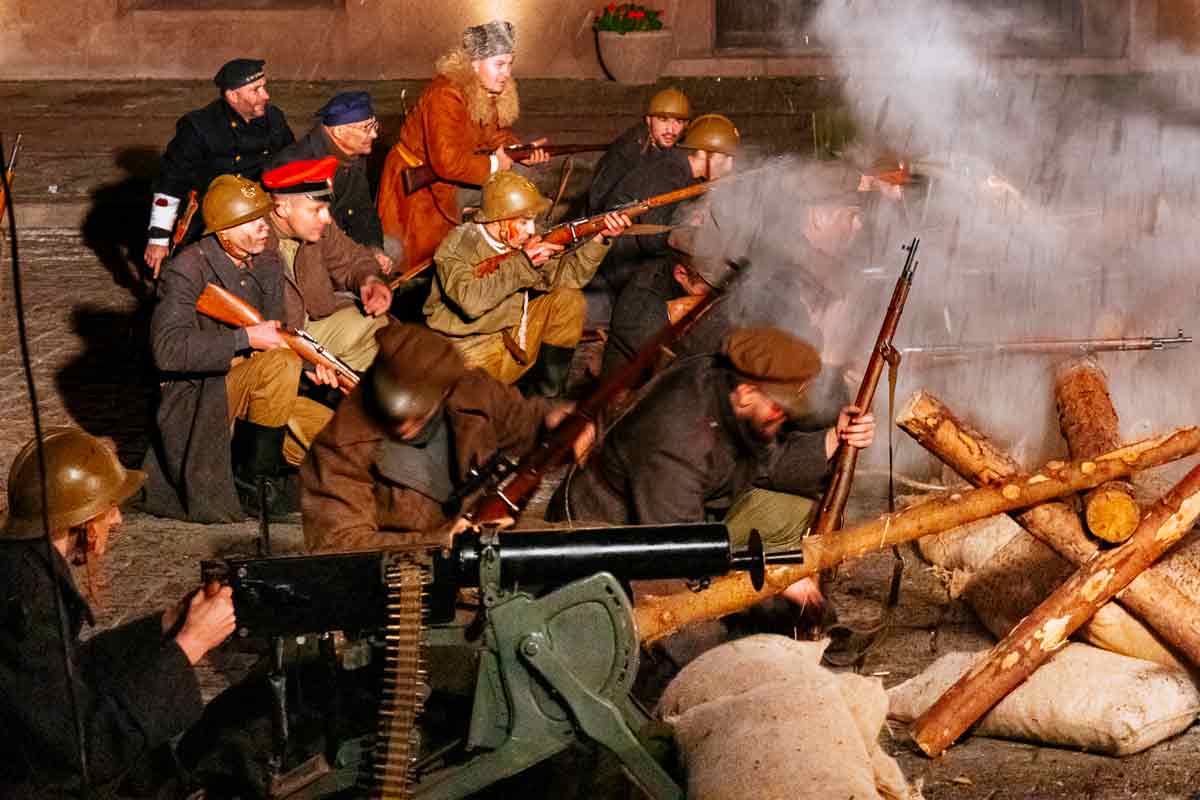 This part of the reenactment reminded me somewhat of a scene from La Bohème (minus the machine gun, of course). 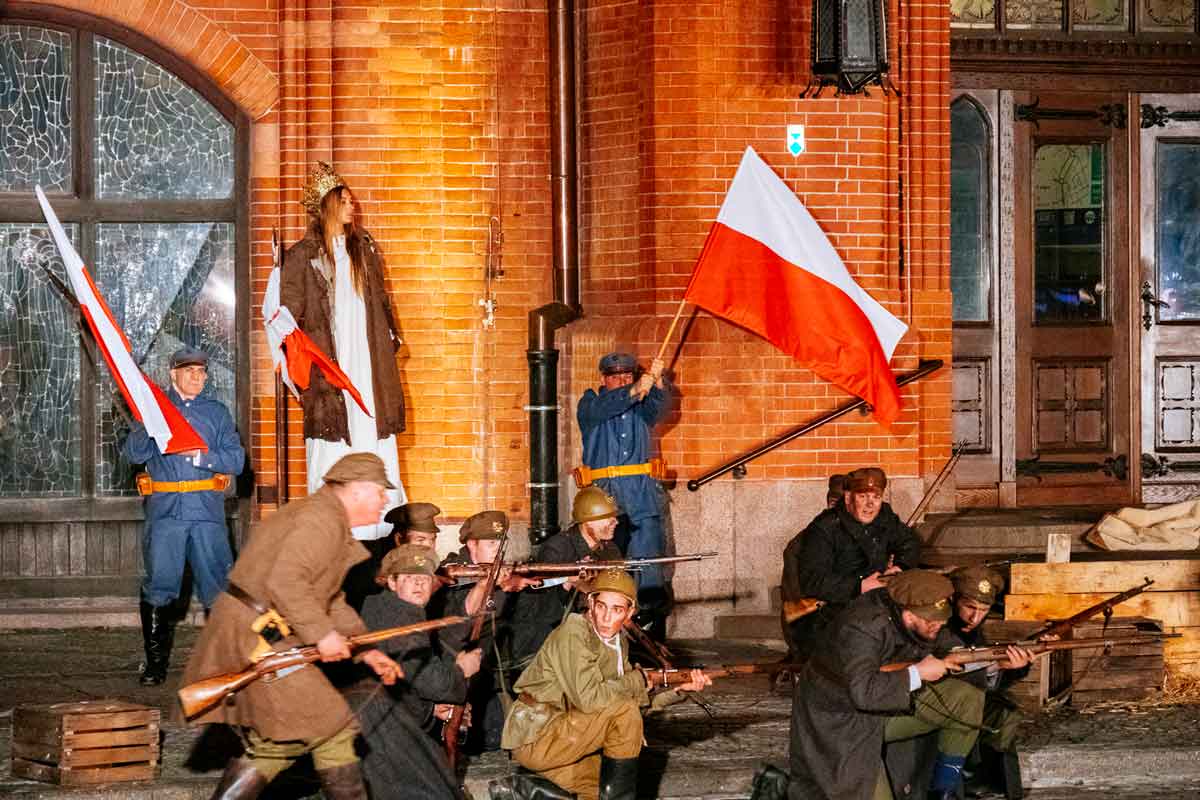 Poland, symbolized by the crowned actress in white, on stilts, is finally successful in restoring independence.

Marshall Józef Piłsudski, portrayed by an actor, was a significant figure in Poland’s post-WWI independence. 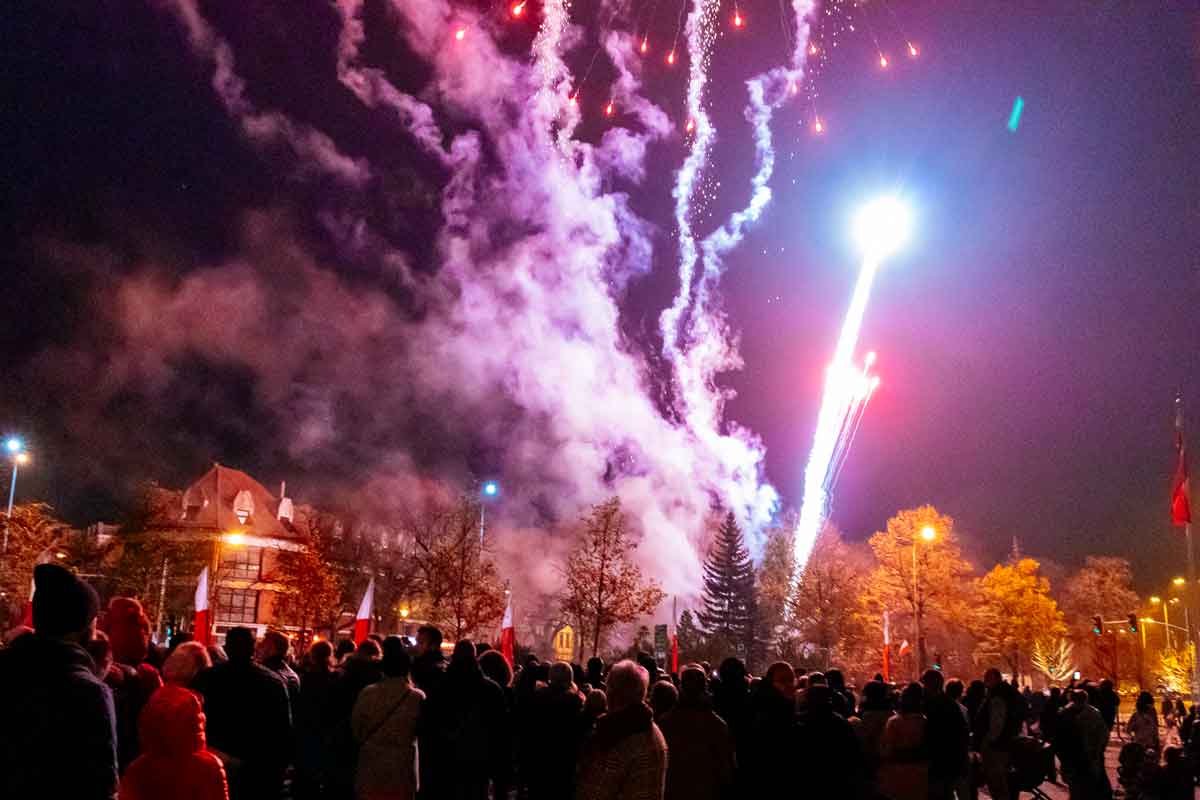 Fireworks were the grand finale to the day’s celebration.