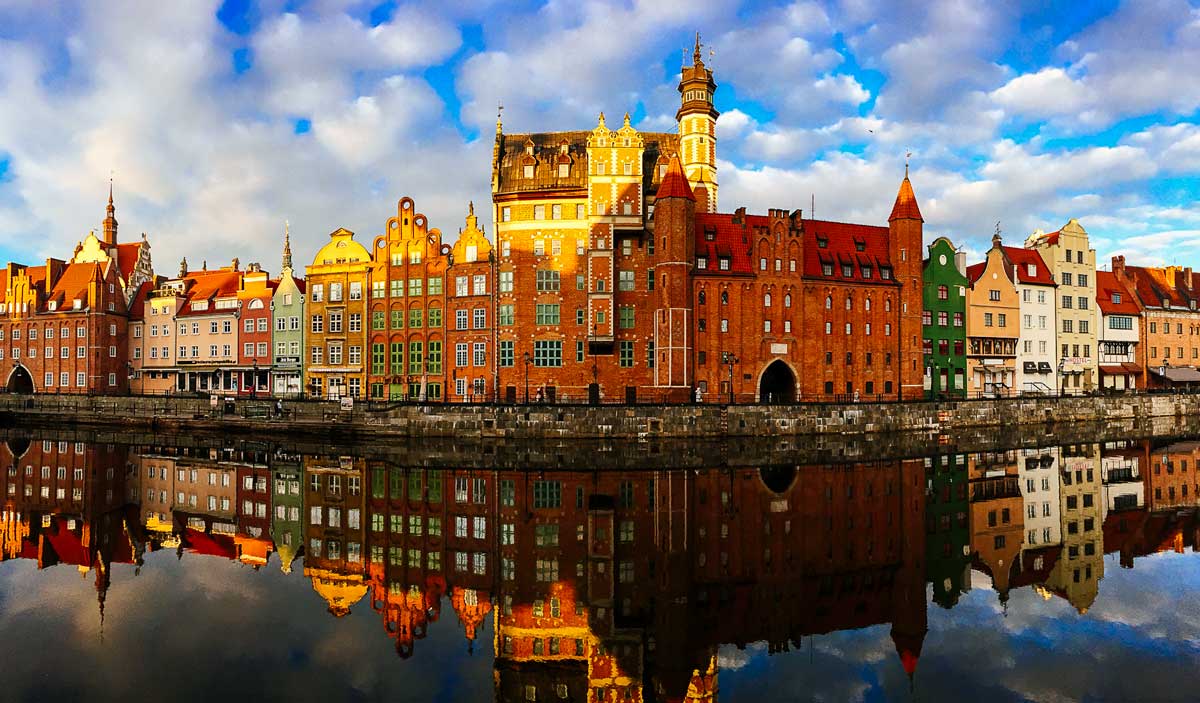 The Gdańsk riverfront in the morning light. The Green Gate is camera left.

After a meh weekend in Hel, we were ready to continue our journey. Looking across the Bay of Puck from the beach in Hel, Gdańsk, our next stop, seems tantalizingly close. However, the trip takes about 1.5 hours by water ferry and two hours by land.

Leaving the Hel Peninsula like a bat out of…well, you know…we turned south. Gdańsk is the southernmost part of the Tricity, three metropolises (Gdynia, Sopot, Gdańsk) that sit on the bay and blend seamlessly into each other.

We had only two nights and the better part of three days for this part of our trip, so we concentrated on Gdańsk’s Old Town. 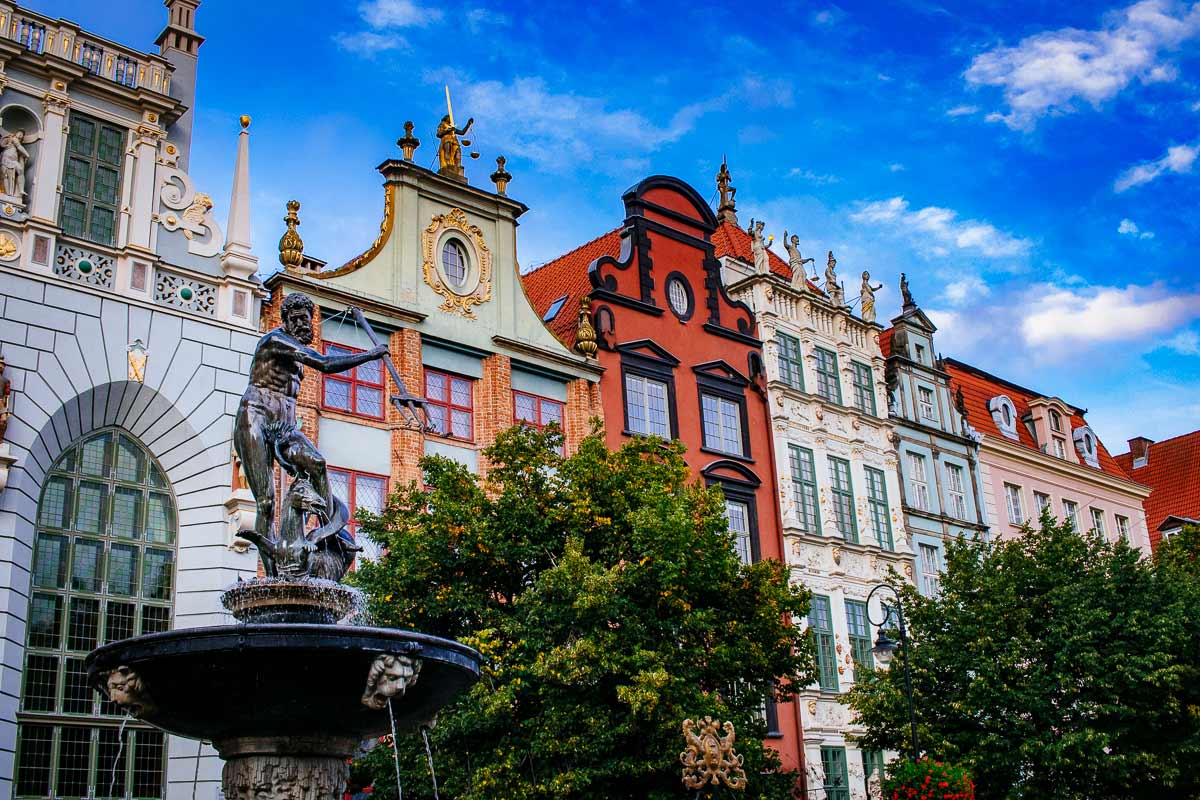 Neptune’s Fountain is a favorite tourist attraction in the Old Town. The sculpture, cast from bronze in 1615, was placed facing the residence of the Polish kings. The mythological god is bowing his head in deference to them.

The combined living/dining/kitchen of our apartment. The blur in the center of the photo is Ries; she was sniffing around as I made this pano shot.

Our apartment in Gdańsk’s Old Town

Using bookings.com we found a very nice, comfortable apartment one block from the Long Market and Neptune Fountain. The apartment had: 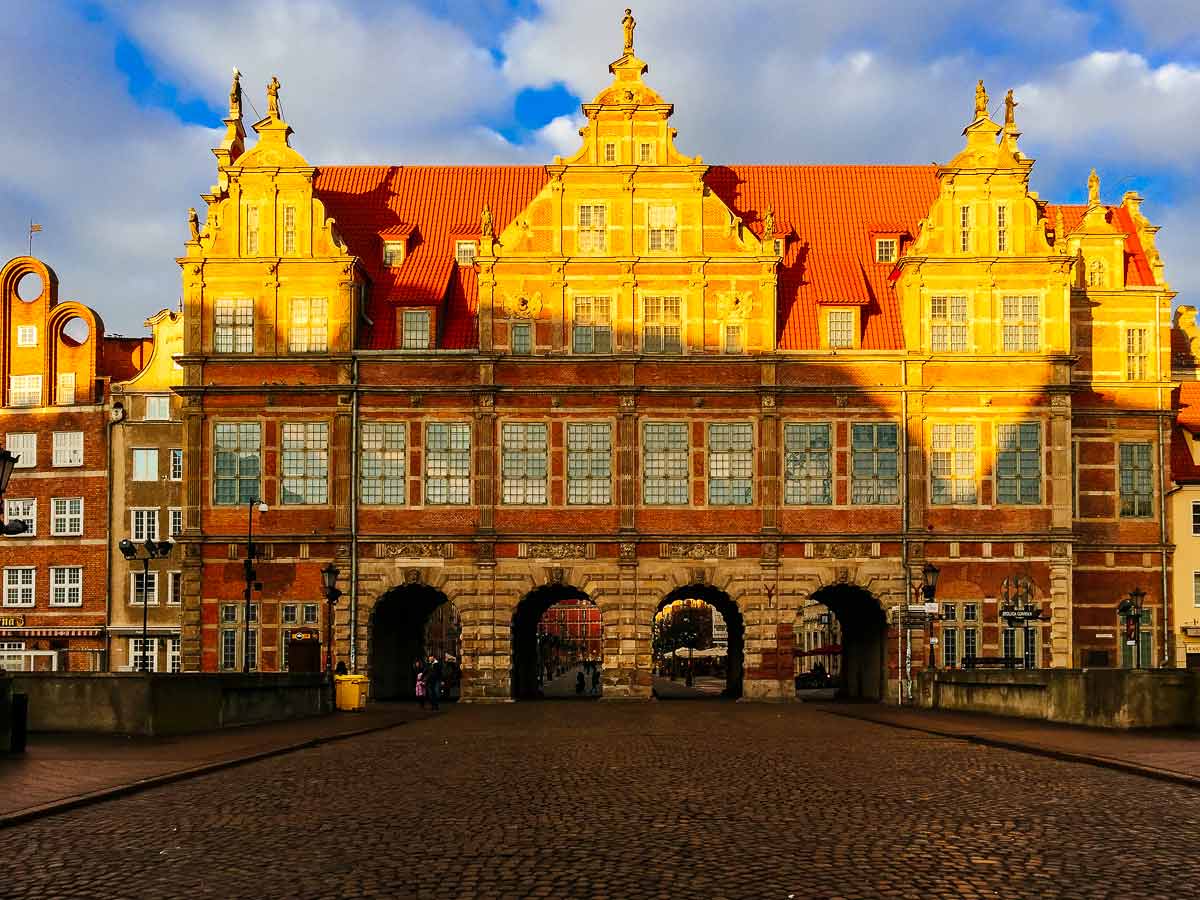 The Green Gate (Brama Zielona) Is the entrance to the Long Lane from the River Motława. Lech Wałęsa has an office in this building.

The beginning of the Long Lane. The Green Gate is camera rear.

Most Polish cities have a main square (rynek), but Gdańsk has the Long Lane (Ulice Długi). This wide pedestrian street was established sometime around the 13th century and connected the river with the marketplace. Eventually, the lane became home to the most prominent and wealthy citizens of Gdańsk.

The architecture along the Long Lane is charming and has the feel of authentic, old Europe. However, the Long Lane and the rest of the city center were practically destroyed during World War II, so what we see now are the results of reconstruction during the 50s and 60s.

And it is authentic, in a way: not an authentic reconstruction of the city as it existed in 1939, but an authentic reimagining of the avenue in an “idealized pre-1793 state,” one that removed traces of German history and reinforces the city’s “reunification” with Poland.1 It’s still history, just not the one we think we are looking at.

Strolling, shopping and dining along the Long Market

The Long Lane and Long Market lend themselves to strolling and people watching. The shops and restaurants are contemporary (a Subway and a Hard Rock Café, for example) and the atmosphere is charming. We were fortunate to have good weather for our two nights there, so we dined outside, enjoying the street musicians and the street performers. 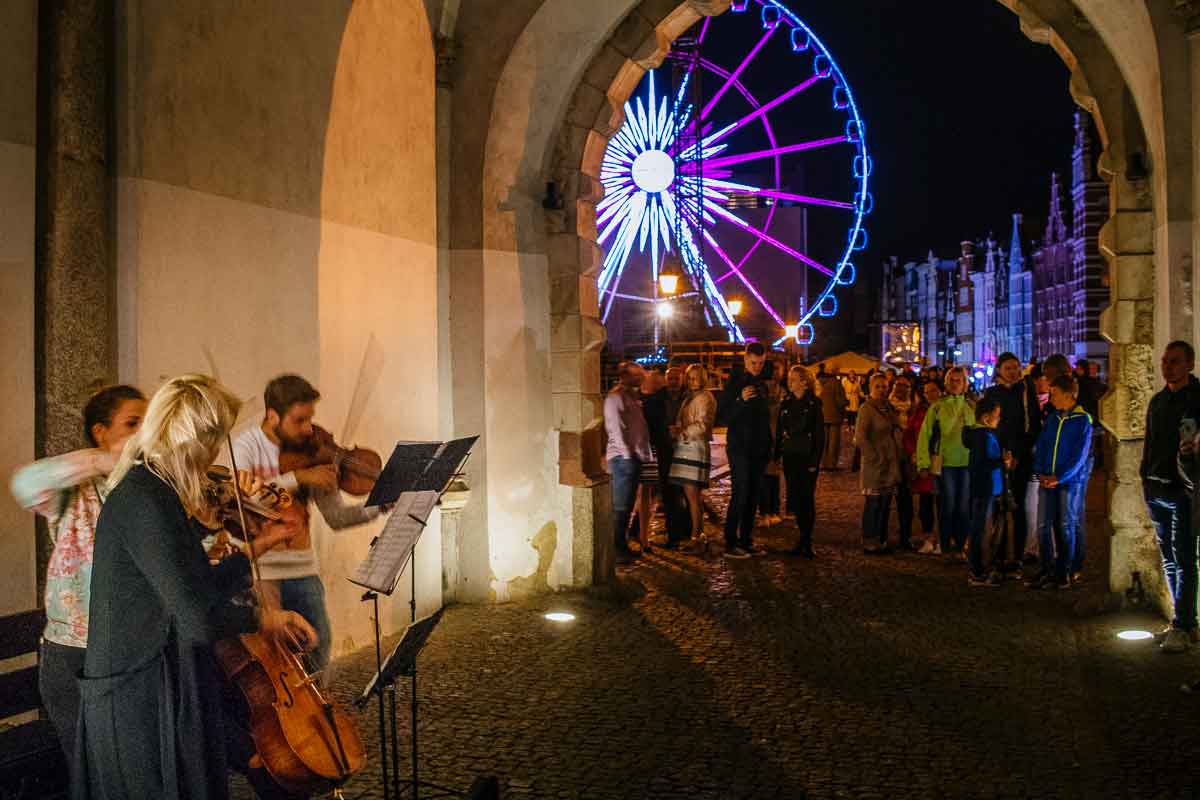 The Green Gate is quite thick and is a favorite place for street musicians to play. The acoustics are good. 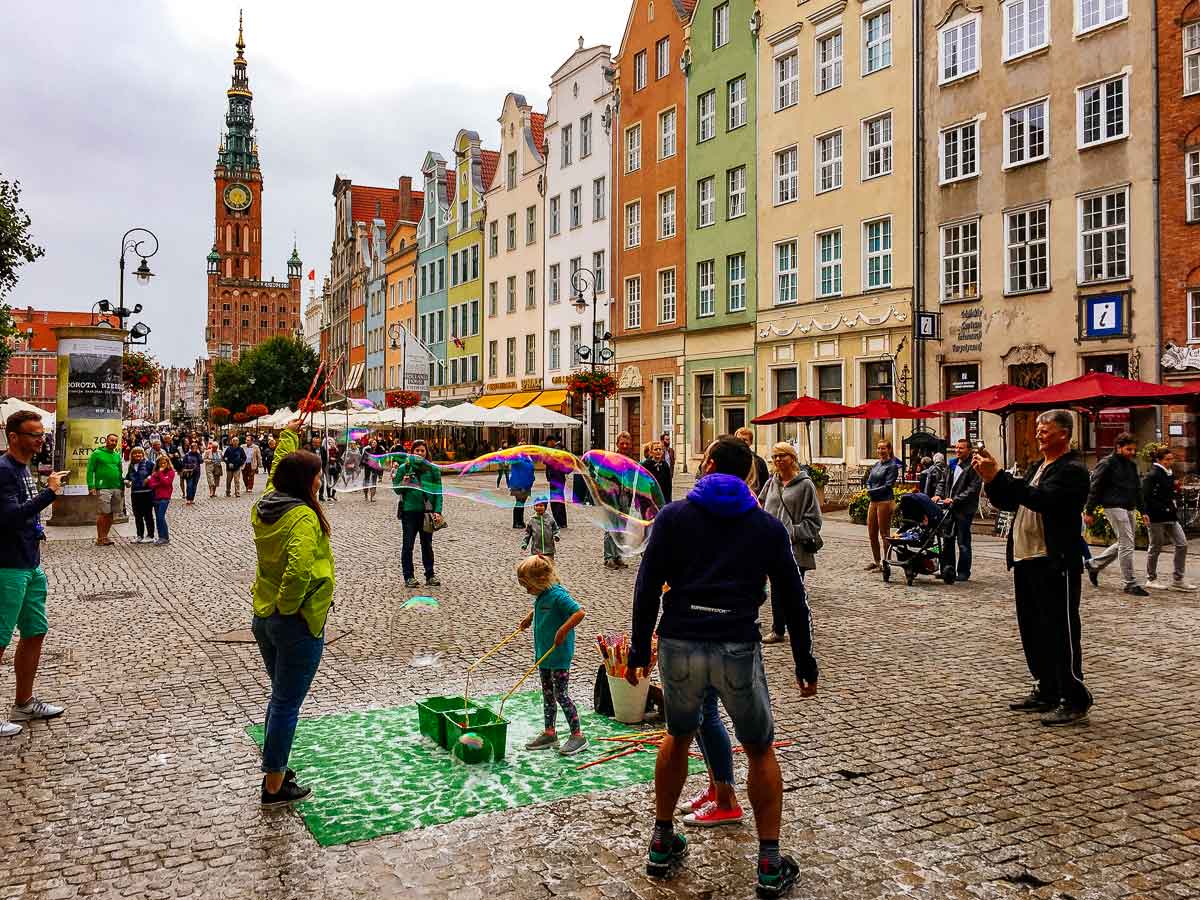 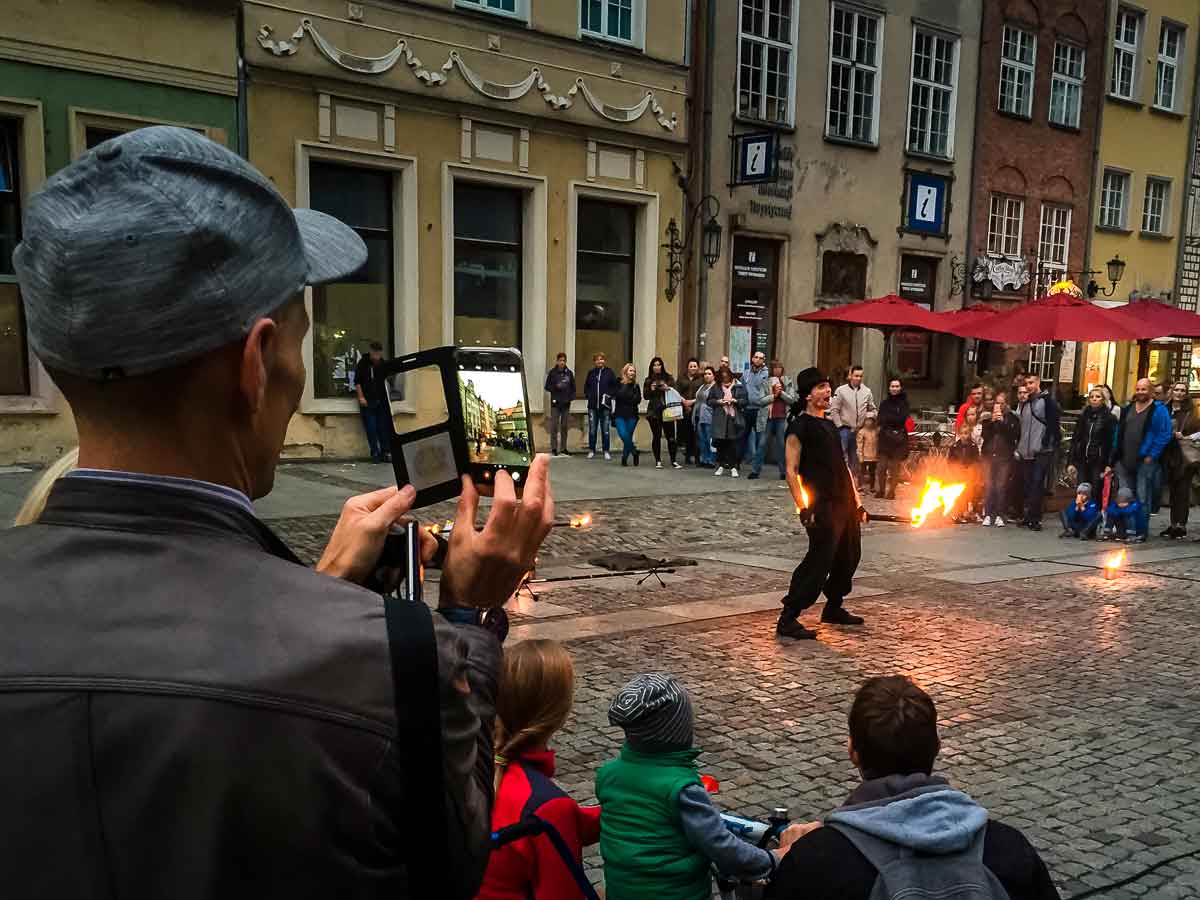 This guy was pretty good at twirling his flaming batons. He was definitely a crowd pleaser. 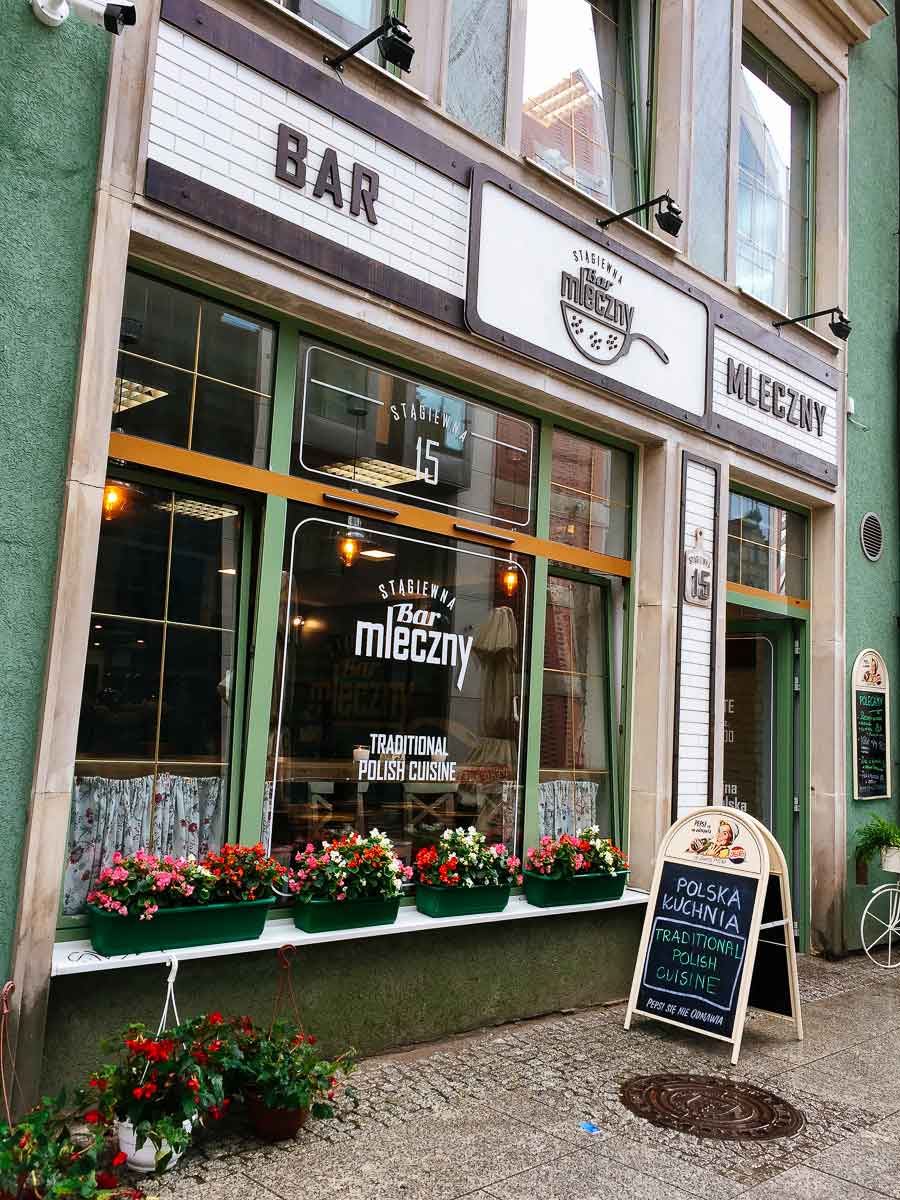 The one more-authentic place we found was the Stągiewna Milk Bar. A milk bar (bar mleczny) is a type of cafeteria that originally served dishes made from milk, dairy products, eggs and flour at very inexpensive prices. The first bar mleczny was founded in 1896, predating the Communist era. We’re told they’re still popular today due to the good food and affordable prices. Our lunch was tasty: Rosemary had tomato soup (żupy pomodorowa) and I had a breaded pork cutlet with a side of potatoes and beets. Based on this one experience, I’m sure we’ll search for a bar mleczny when visiting other Polish cities.

The Westerplatte: the first shots of World War II

The Westerplatte Memorial marks the place where World War II began. It’s an easy, 20-minute drive from the Old Town.

Prior to World War II, Gdasńk was the Free City of Danzig and was pro-German. However, the Polish government had negotiated the right to have an ammunition depot with a garrison of 88 soldiers on the Westerplatte.

The Nazis attacked the garrison on Sept. 1st, 1939 and the battle lasted for seven days. We visited on Sept. 2nd, 2017, the day after the 78th anniversary of the beginning of the battle. We wondered if there would be a special ceremony. We did not see any evidence of any special ceremony.

What remains now is a memorial, one or two shells of buildings from the battle, and a series of informative display panels throughout the park. 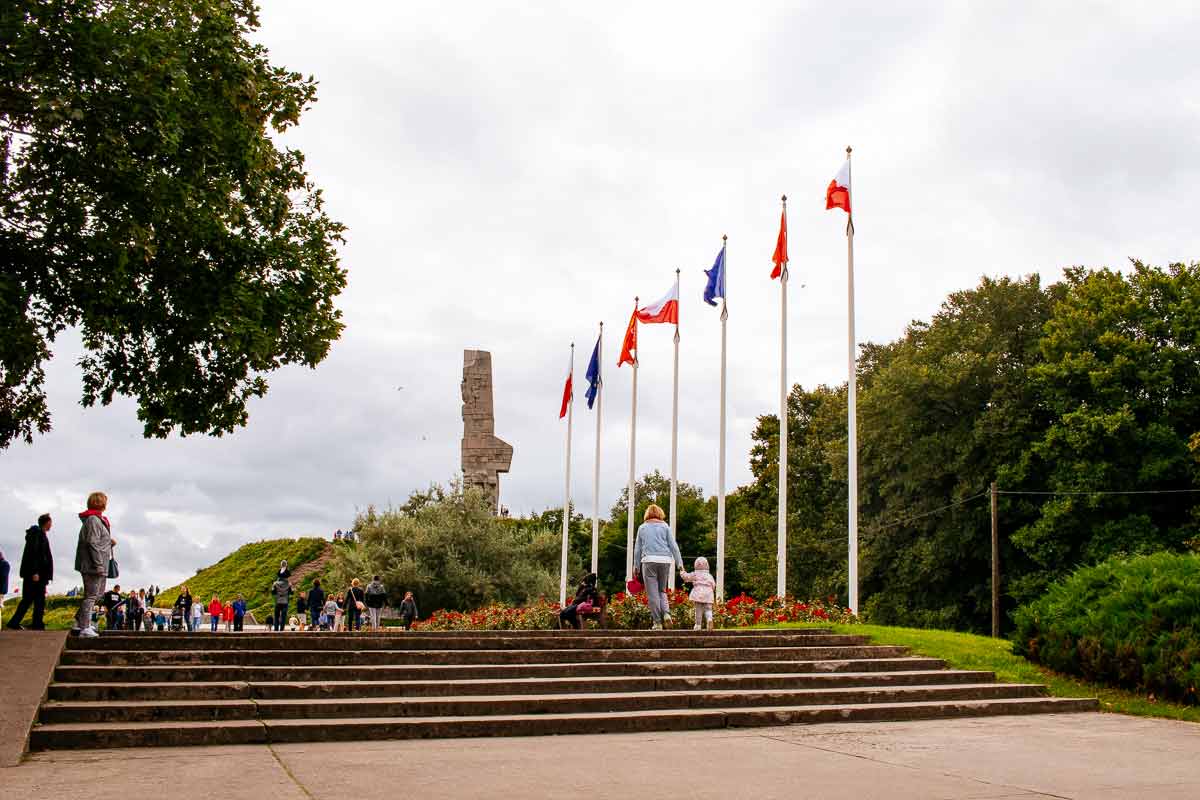 The entrance to the Westerplatte Memorial. 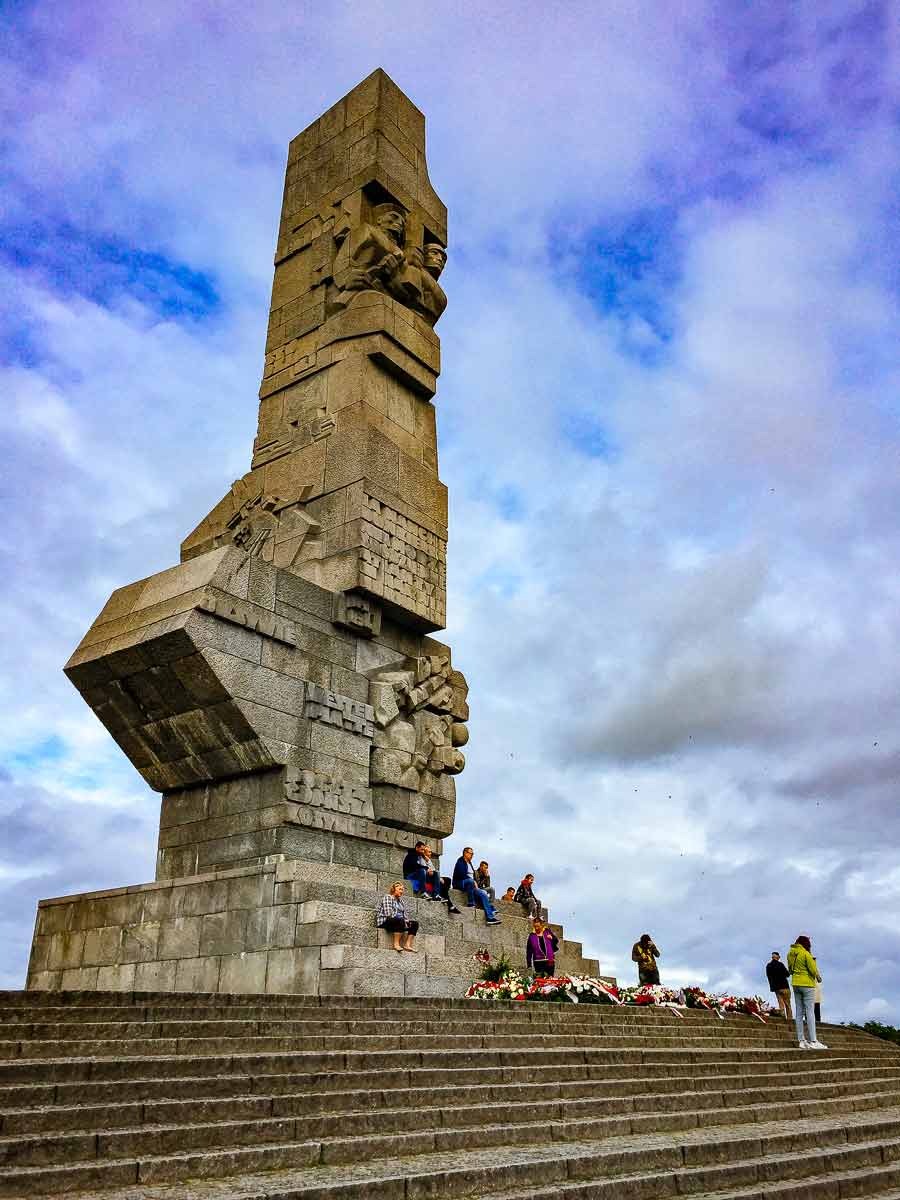 Traveling with our dog

This trip was our first attempt at a long weekend trip since arriving in Poland. We brought our dog along, and, I’m happy to say, it was a success. She was not the only dog there, as we saw several other dogs while walking along the Long Lane and the green spaces in the surrounding neighborhoods. The biggest lesson learned is that she seems to have as much luggage as her two humans combined.

Before we left the big city we made one quick stop at a grocery store in search of ginger ale. Many Poles have told us that ginger ale is not popular in Poland, which explains our inability to find it at home. Happily, the big-city grocery store had some. So, ginger ale safely ensconced in the trunk, we began the 2½ drive home through busy traffic and narrow roads.

Gdańsk was charming and we look forward to visiting again.2 As for Hel ~ we were happy that we went to Hel and happier that we never have to go back.