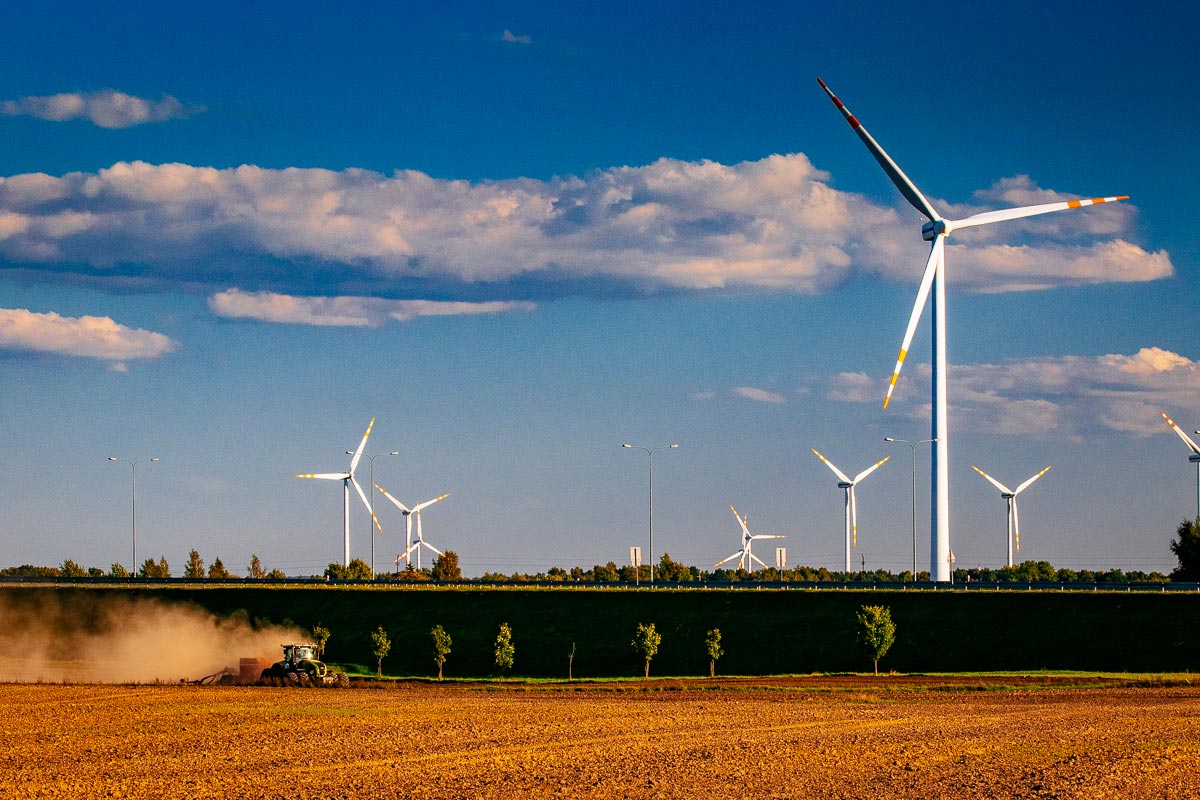 Our neighborhood is bordered on three sides by crop fields. This summer’s crops were oats and barley. On the other side of the elevated road, the wind turbines rise from yet more crop fields.

Reflecting on our first year in northern Poland

In August of 2017, Ries (our dog) and I joined Rosemary in Poland. It had been a whirlwind summer ~ she was already in Poland so I had to manage the move from Louisville. Sell the house, sell the car, sort all our possessions into five piles (keep, sell, donate, recycle, discard) and then sort the “keep” pile into four more piles (long-term storage, stuff to go to Wiesbaden, 700 lbs of stuff to go to Poland, stuff to go with me in suitcases on the plane). It was a bit disorienting and certainly no time for introspection; it was just a time to do. But now, after a year, it seems an apt moment to reflect and answer the question, “was it a good idea to do this?”

I didn’t think that I had any expectations of what Poland would be like, but I was wrong. Eventually, I realized that I had expected Poland to be grey and dreary, a downtrodden post-Communist state. Perhaps it was in the early 90s, but today, Poland is colorful and business-oriented. There are many stores, including two large malls, in this town of just under 100,000 people. The locals dress stylishly, yet not ostentatiously (all the T-shirts have English-language slogans). Most of the cars on the roads are relatively new, probably from within the last decade or so. Many different models are represented (BMW, Porsche, Citroën, Škoda, Audi, Mercedes-Benz, for example) and I’ve even seen a few U.S. pick up trucks.

Learning to live in a different country: initial frustrations leading to successes

Initial frustrations: brought to you by the letter “z”

Of course, the biggest frustration has been the language barrier. At first, Polish seems impenetrable. The letter “z” seems to be the most popular letter in the Polish language and is used liberally: rz, sz, cz, dz, szcz, dzi, etc. Adding to that, there are three flavors of “z”: z, ź and ż. 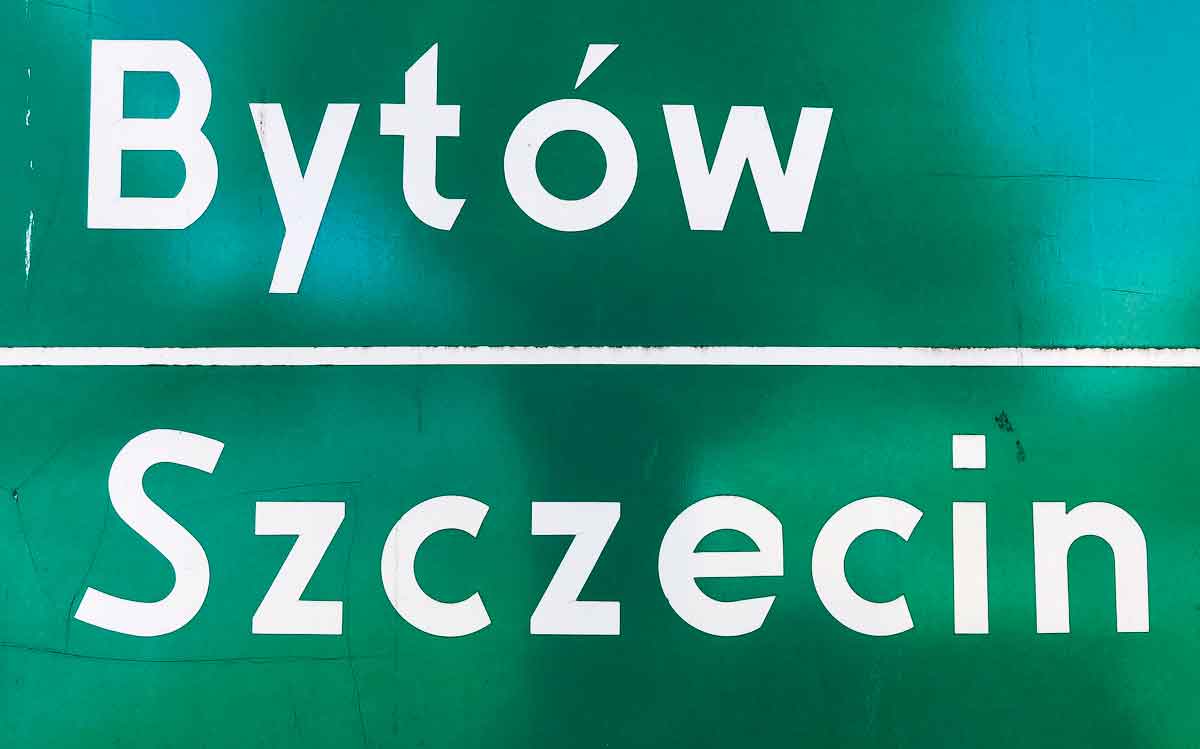 Our first introduction to Polish was through road signage. Szczecin is a large city on the border with Germany and so is featured frequently on road signs. “S-Z-C-Z”: how is that pronounced? Language classes cleared up that mystery: “sz” sounds like “sh” and “cz” sounds like “ch.” You just have to say them together quickly.

After taking classes once a week for several months, I’m happy to say that Polish only looks impenetrable. Polish pronunciation follows very set rules that are easily learned. Today, we can successfully shop in the grocery store, order in a restaurant and visit the doctor. But don’t ask us for directions.

Washing the windshield: don’t try this at your Polish home

Another initial frustration was that Polish houses are built differently than US houses, as I discovered when I tried to wash the car. 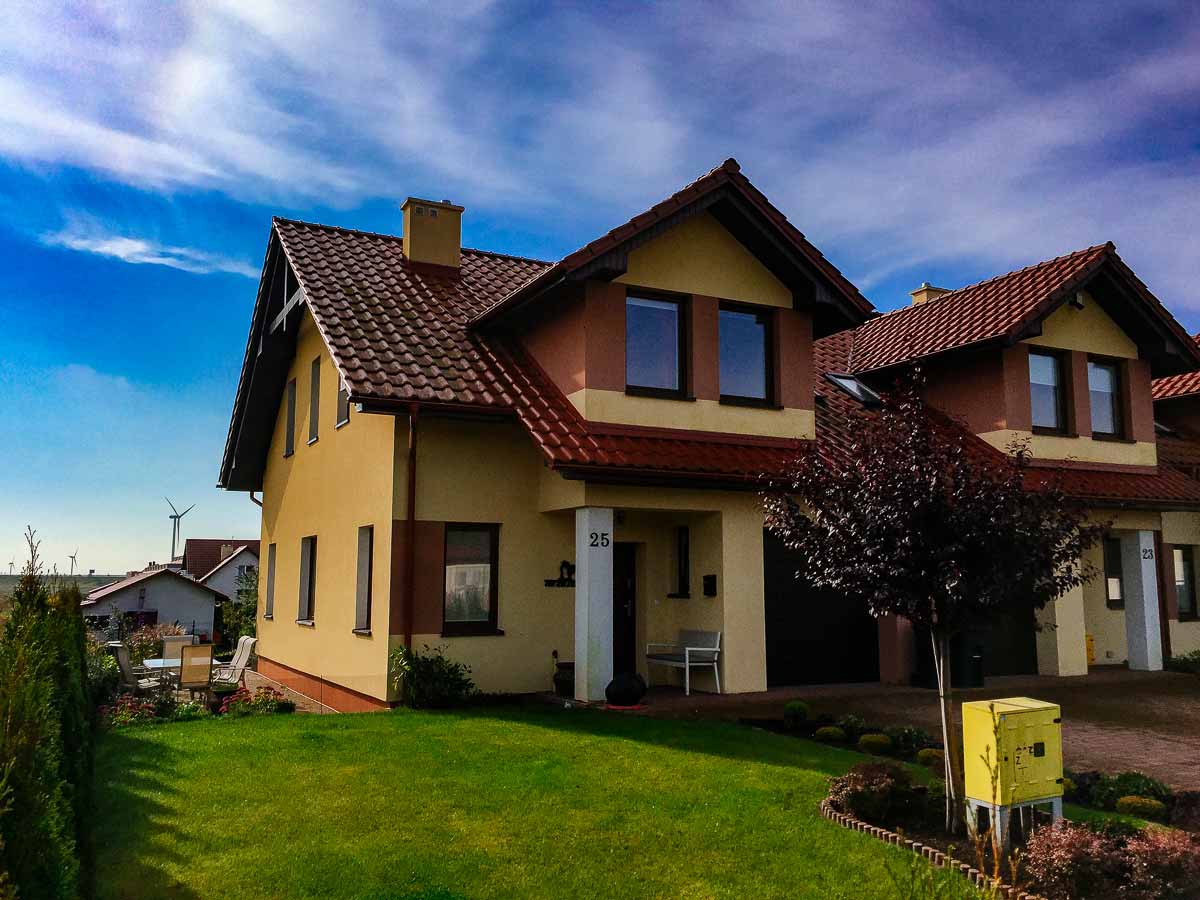 Our house, the end unit on a row of 13 attached homes. Note the absence of electrical outlets and hose bibs on the side of the house.

The day after arriving in Słupsk from Wiesbaden, I wanted to wash the bugs off the windshield. There was a hose, with a nozzle, lying next to the house, so I went to connect it and wash away.

The hose bib wasn’t on the exterior, so maybe was in the garage? I went through the house into the garage and quickly found the hose bib. Success! Now to open the garage door, hook up the hose and wash away.

I couldn’t find the garage door opener. There wasn’t a switch mounted on the wall that I could see, nor did I find a remote in the car. I could manually open the garage door, but since this was a rental house in a foreign country, I decided to wait on that.

My next thought was to go to one of the many nearby car washes. I went to the nearest one, but the car wash only takes coins. I only have bills. There isn’t a change machine.

At that point, I gave up for the day.

That night when I told Rosemary this tale of woe, she reminded me that yes, we do have a garage door opener, and yes, she had told me about it. It lives in a super-secret compartment in the dash of our car. My only defense for not remembering is that I was still suffering from jet lag.

Armed with the knowledge of the location of both the hose bib and the garage door opener, I successfully washed the car windshield the next morning.

It only took me two days.

How are the Polish houses different than American houses?

Polish houses, at least ours and all the ones we’ve seen so far, are not stick built but are masonry structures. 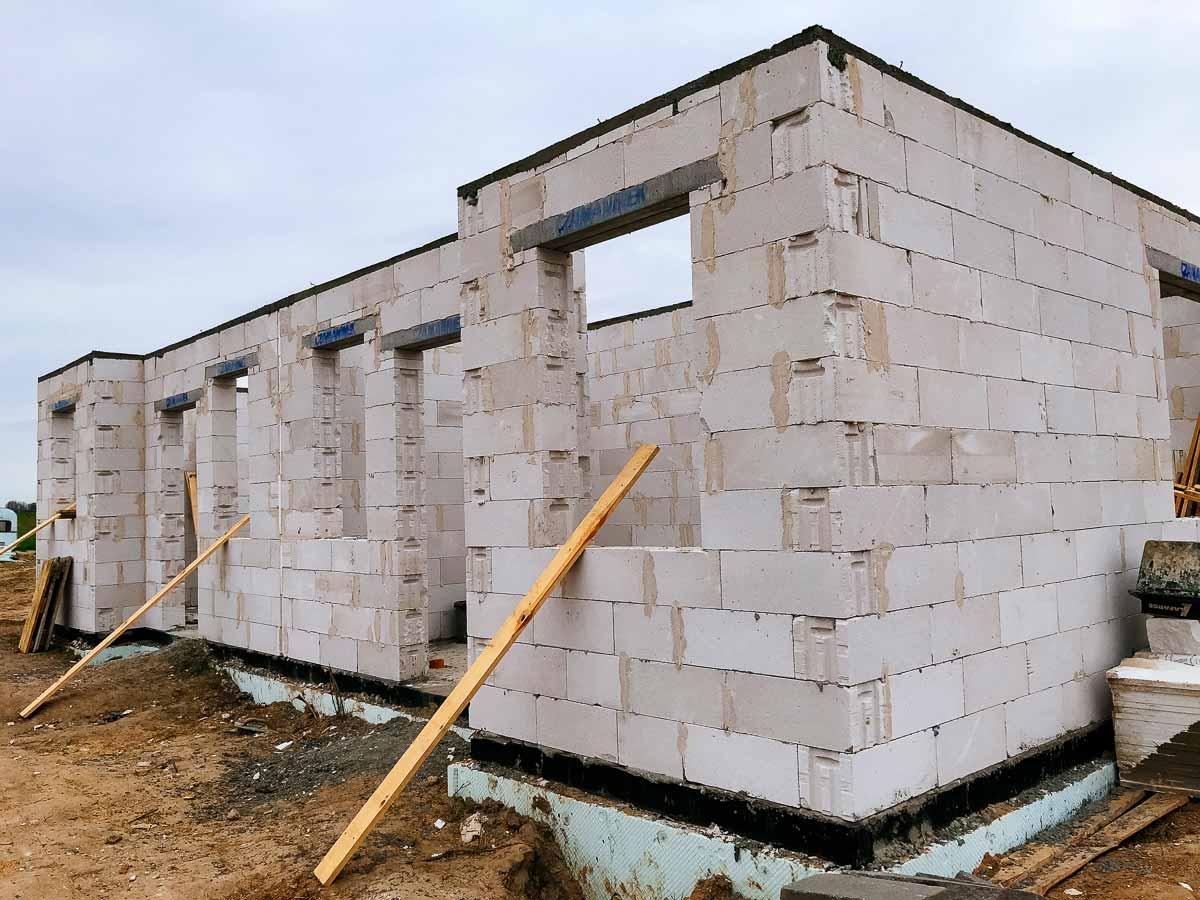 This new build in our neighborhood gives a good glimpse at the masonry construction techniques used here.

The masonry blocks are autoclaved aerated concrete (AAC). AAC is made with fine aggregates, cement and an expansion agent that causes the fresh mixture to rise like bread dough. This type of concrete contains 80 percent air.

They are very warm and well-insulated, but they have no space for an outside hose spigot or electrical outlets. In addition to the car washing fiasco, another consequence of this is that at Christmas time, outside holiday lights are powered by an extension cord that runs back into the house through a cracked window.

Shopping in the grocery store

Finding the correct items to purchase was another initial frustration because all the packaging is, of course, in Polish. The Polish words were easy to learn, shopping became (and still is) a vocabulary lesson, but one that’s easily done. 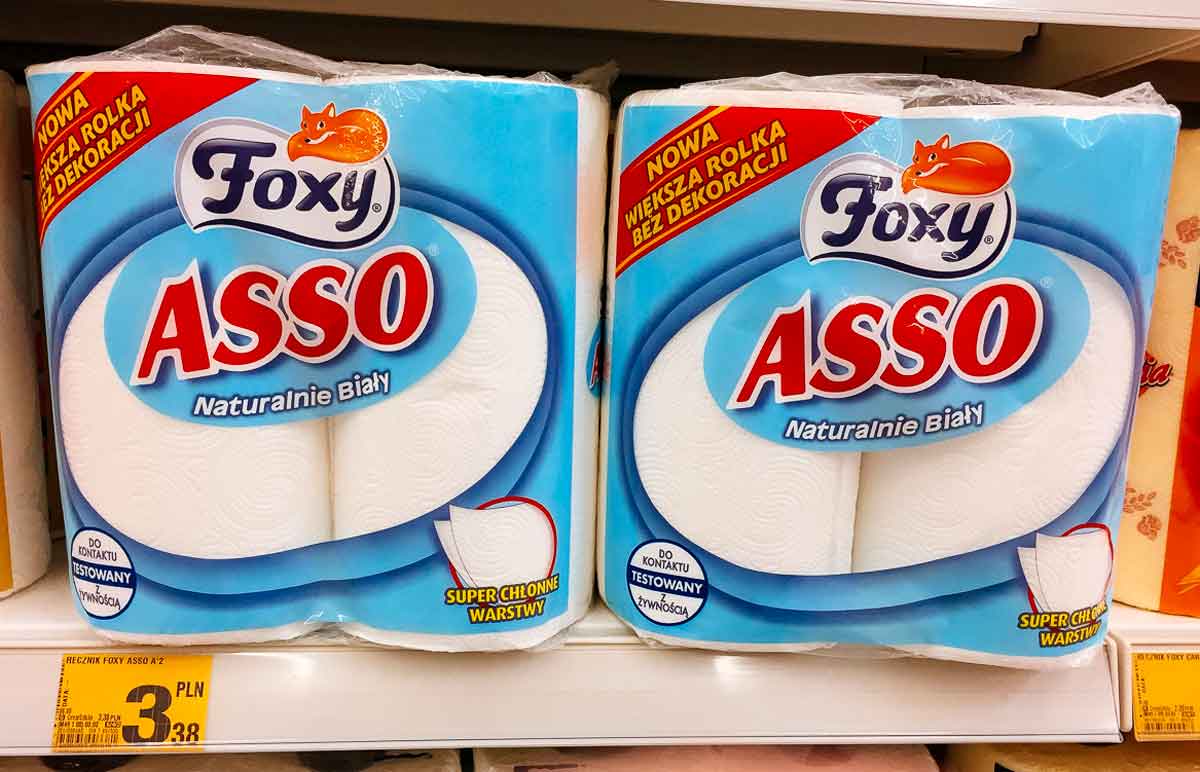 I saw this product during one of my first visits to the local grocery store. Upon closer inspection, they are paper towels and, unfortunately, not what I thought they were.

The real trick is that items are frequently moved. For example, one week the yogurts are on the end of the aisle, the next week they’re in the middle. Or the cheddar cheese that used to be in the middle of the cheese aisle is now on the end. If I can’t find an item, I never know if it’s because it’s out of stock, if it’s been moved or if I just haven’t read the labels correctly.

Although the store is very well stocked, there are two important exceptions: refried beans and decent tortilla chips. The things you miss!

Fitting into the neighborhood

When we first moved into the neighborhood, the neighbors really didn’t pay much attention to us. Partly because Poles seem to be quite reserved by nature, as we’ve come to find out, but also because of the language barrier.

One of our neighbors flies a Polish flag from a stand-alone flagpole in the front of his house. One windy day last winter as Ries and I were returning from the morning walk, I noticed his flag in the field beside our house.

I picked it up, used Google Translate to turn “Is this yours? I found it in the field” into Polish, knocked on his door and presented him the flag.

My Polish failed miserably. I don’t think either one of us really knew what I babbled, but he said, ”Thank you” in English as he closed his door.

But ever since then, he and the rest of the neighbors say hello and nod their heads in greeting. We’re “one of the neighbors” now. I guess the “head nod” is the Polish equivalent of the midwestern two-finger wave when driving.

A while back, a friend asked me, “how’s Poland?” At the time, all I could answer was, “good.” That’s a lame answer, so I’ll try to give a better one now. 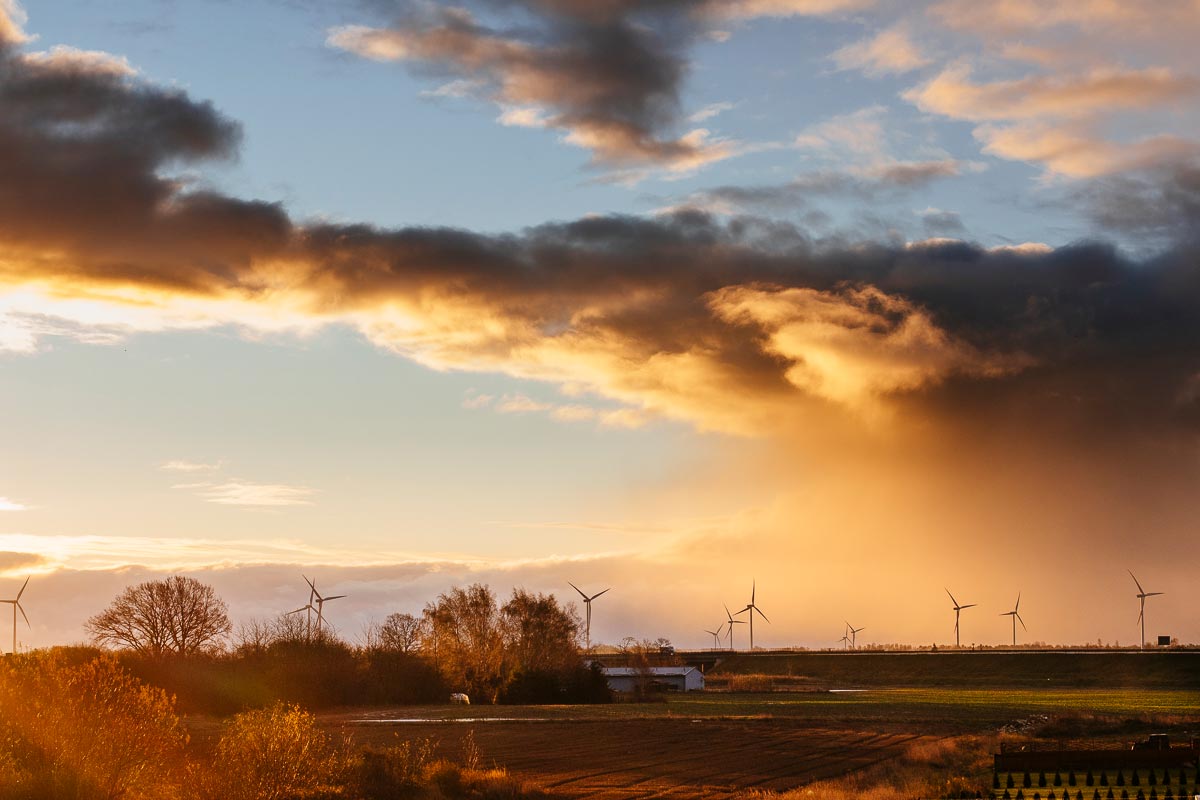 An evening view from our balcony. Northern Poland has beautiful skyscapes.

Poland is a beautiful, colorful country, steeped in history. The Poles we know that speak English are kind, helpful and very gracious with us when we try to speak their language.

The frustrations and learning curve are less. We know where to find things in the grocery store. We know enough Polish to go to the doctor, dentist and buy things at the mall.

We’ve discovered new foods that we like: zapiekanka, which is like cheesy pizza bread that’s served to-go, usually at the gas station or in a hole-in-the-wall shop; żurek, which is a soup made of soured rye flour (akin to sourdough) and meat (usually boiled pork sausage or pieces of smoked sausage, bacon or ham); and pierogi.

We’ve learned a lot about a language that we never thought we’d ever encounter. I can count to 499 in Polish and can now (usually) understand the check out clerk at the grocery store when they tell me how much I owe.

We’ve visited places, both in Poland and in the surrounding countries, that we never thought we visit.

This first year has been a great adventure. So, yes, it was a good idea to make this move.

Now, life in Poland seems like the new normal. I guess, well, because it is. But accompanying the lessening frustrations, and the transition to this new “normal”, is the lessening of the sense of wonder about this new place.

So, for our second year here: regain and treasure that sense of wonder. And practice our Polish.