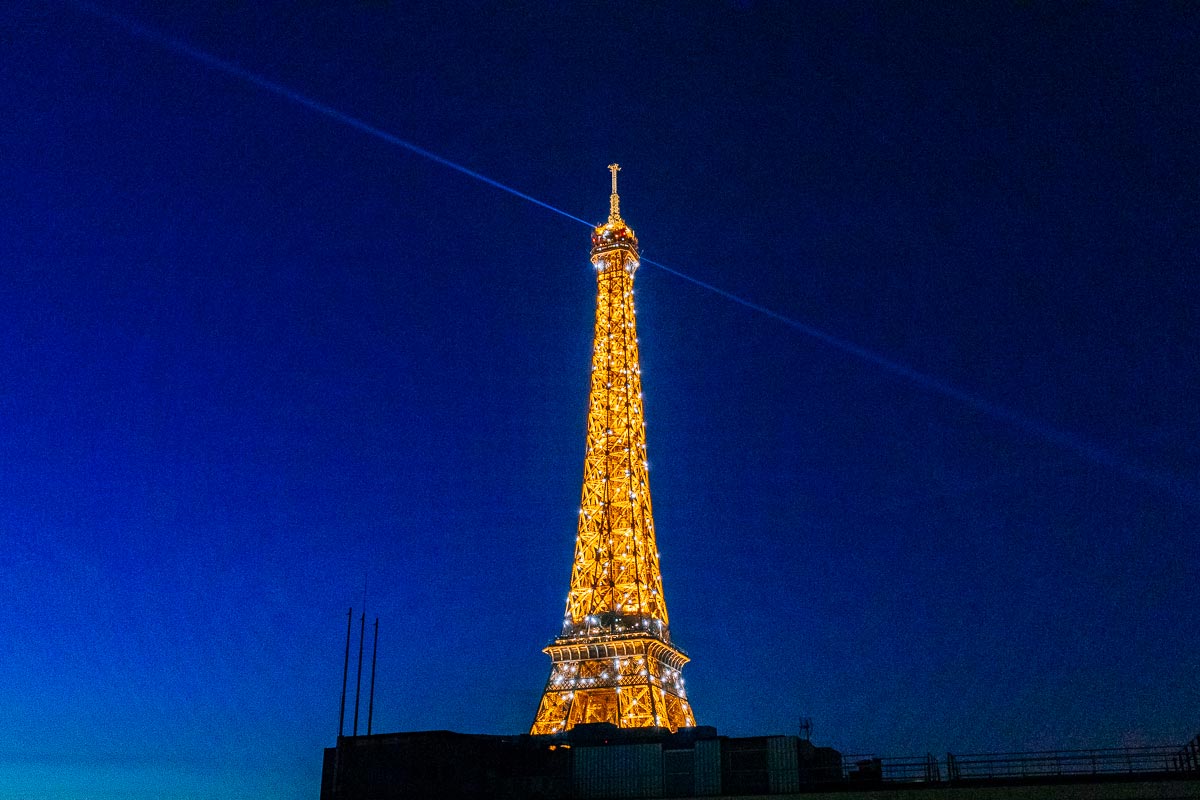 Our room had a spectacular view of the Eiffel Tower.

Meet a friend, stroll the Champs-Élysées, dine in the shadow of the Eiffel Tower. And more.

Don’t miss this! Don’t miss that! So much to see, so much to do, visiting Paris can be almost like work. But what if you only want to have a relaxing, enjoyable day and still have history, culture and cuisine?

Well, it’s possible. Here’s what we did.

Can we meet in Paris? 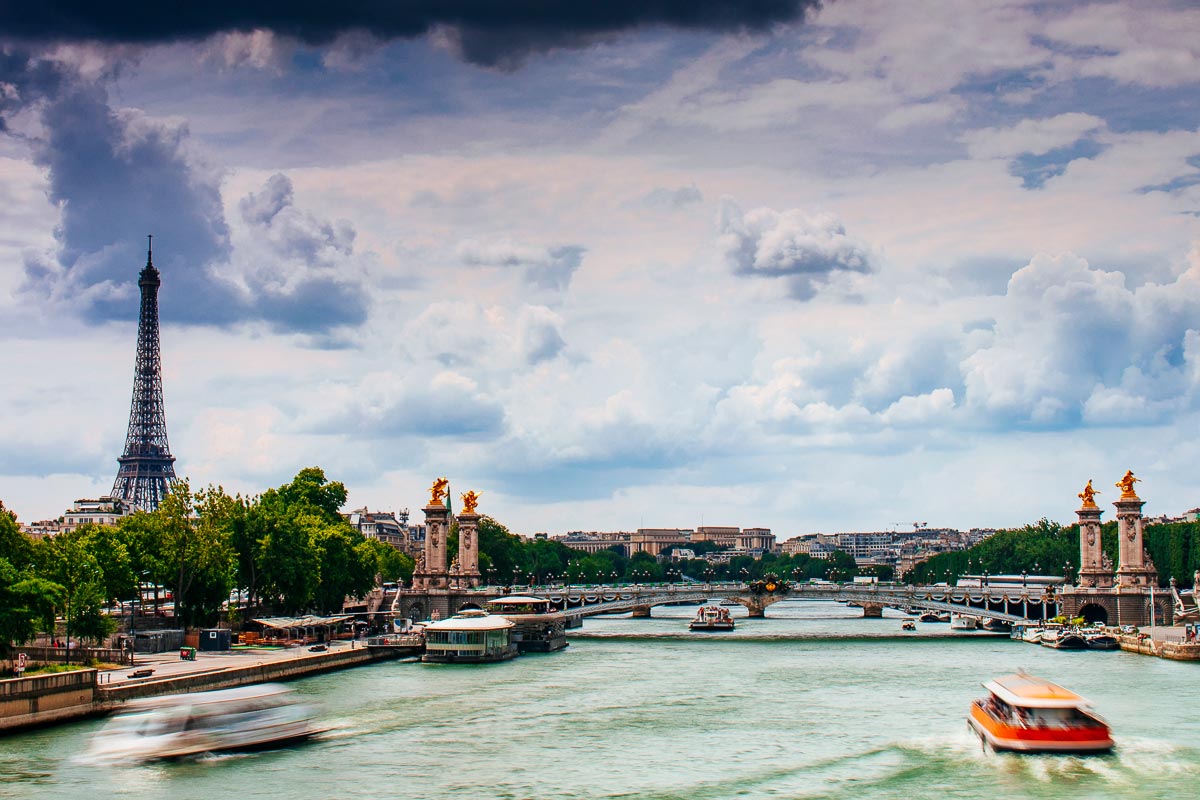 Boat traffic on the Seine near the Pont Alexandre III. The Seine is actually this shade of green, not blue or brown.

The email was straight out of a novel: can we meet in Paris?

Our friend, Ray, asked us to meet him in Paris. He was a chaperone on his daughter’s school musical group tour. He, his daughter and 498 of their closest friends were on a weeks-long bus tour, with one of the stop being Paris. 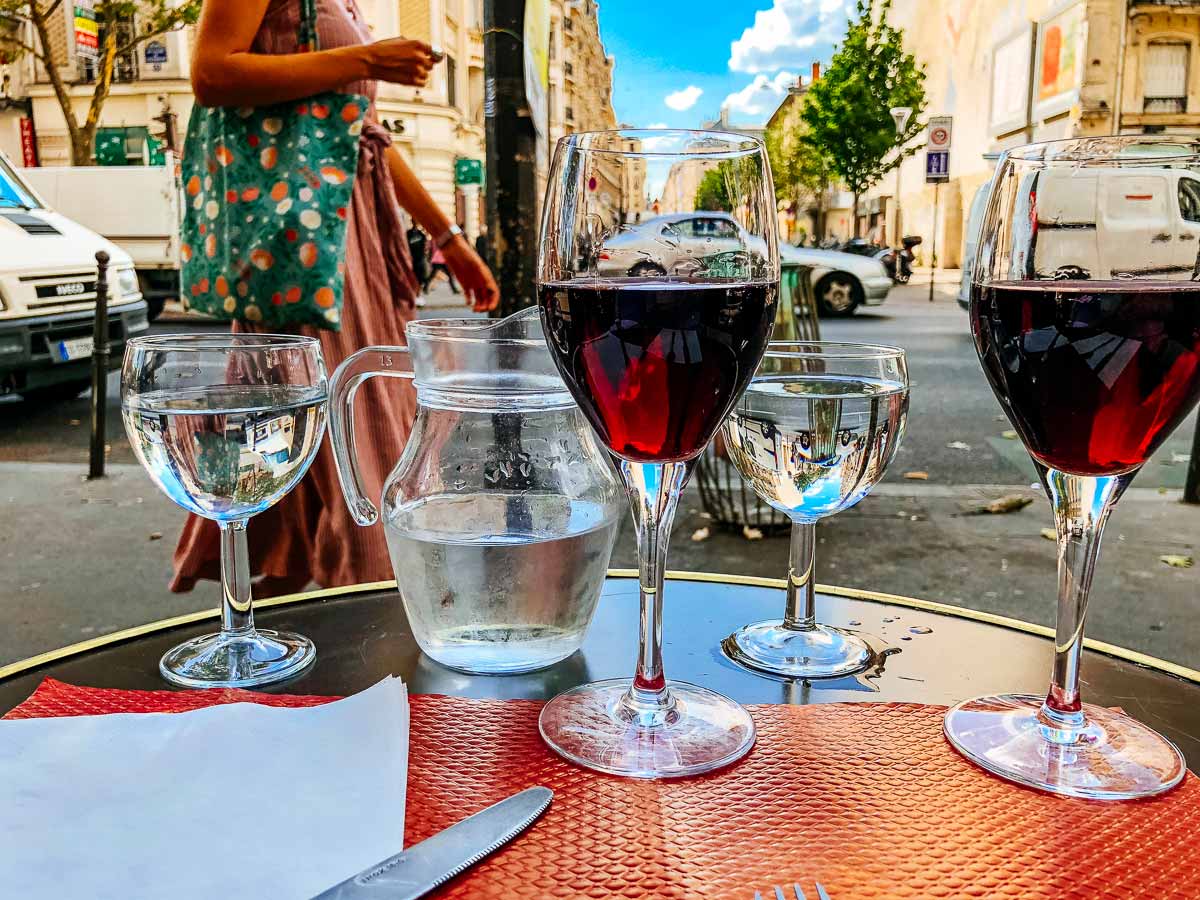 We met Ray at the agreed-upon hour but his group’s activities were taking longer than expected, so we had to hang out for a while. No problem, we’re in Paris! All we had to do was find a café and order a snack (plus a couple glasses of wine). We found a café with open seating on the sidewalk. 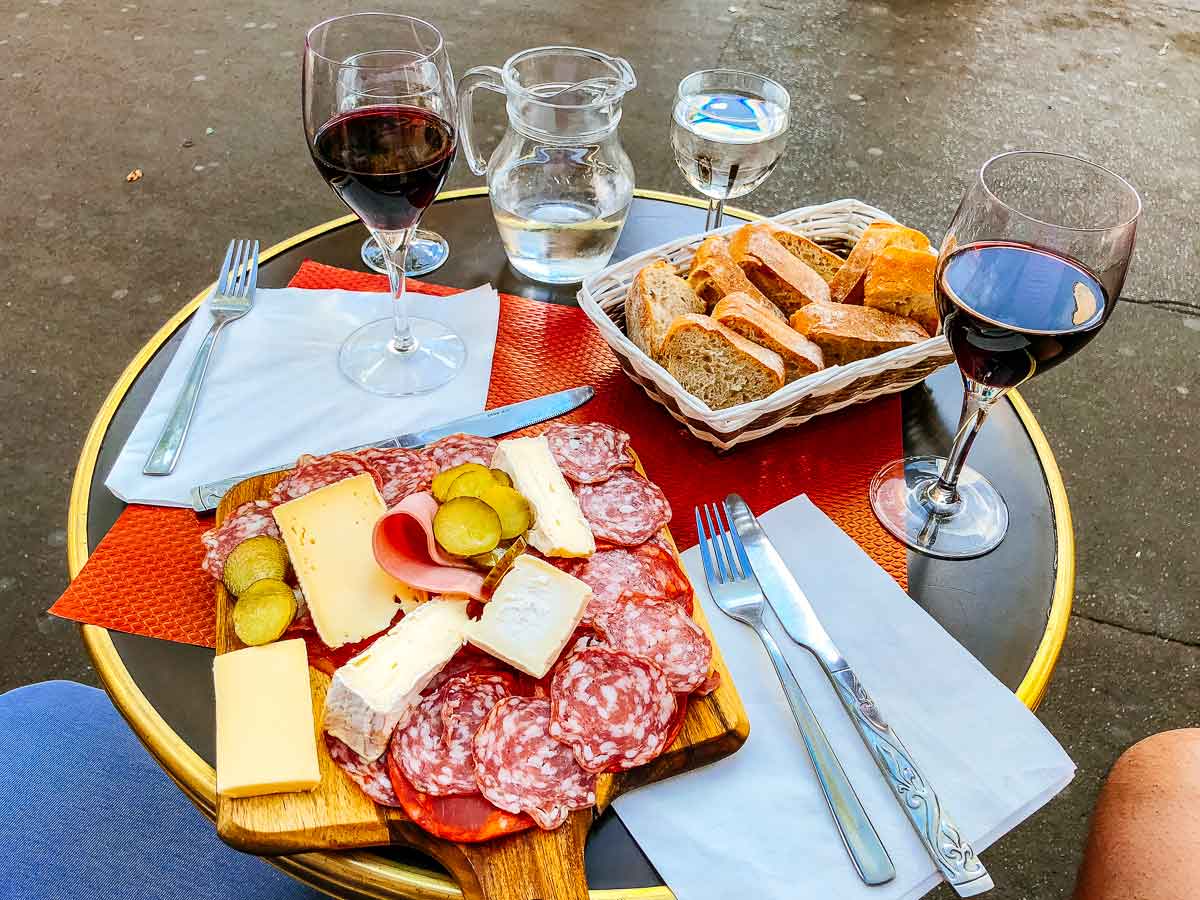 We chatted with the owner en français until Ray was able to join us. The four of us continued chatting, in English and French, until we each finished two more glasses of wine. Then, off to dinner for more food and French wine.

Why we love the Eiffel Tower 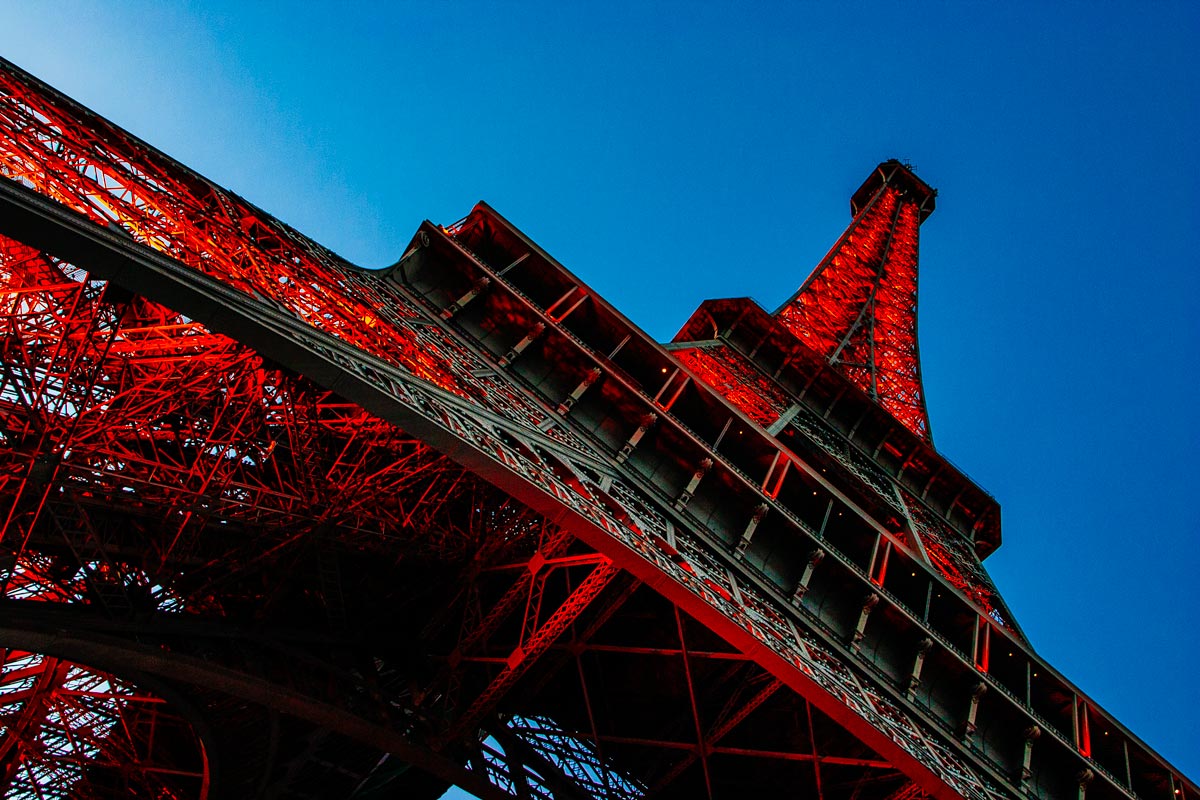 The evening lights make the tower orange rather than brown.

In 2002, on our first visit to Paris, one night after dinner we found ourselves walking across the Champs de Mars, the field next to M. Eiffel’s tower. We were admiring the tower, colored orange from the illuminating lights and contrasting against the dusky blue sky, when it began to sparkle.

It sparkled! Really! And from that moment, we loved the Eiffel Tower.


We wanted to see it sparkle again so for this trip we chose a hotel with a great view of the Eiffel Tour. We splurged a bit, not as much as you’d think, and it was worth it. 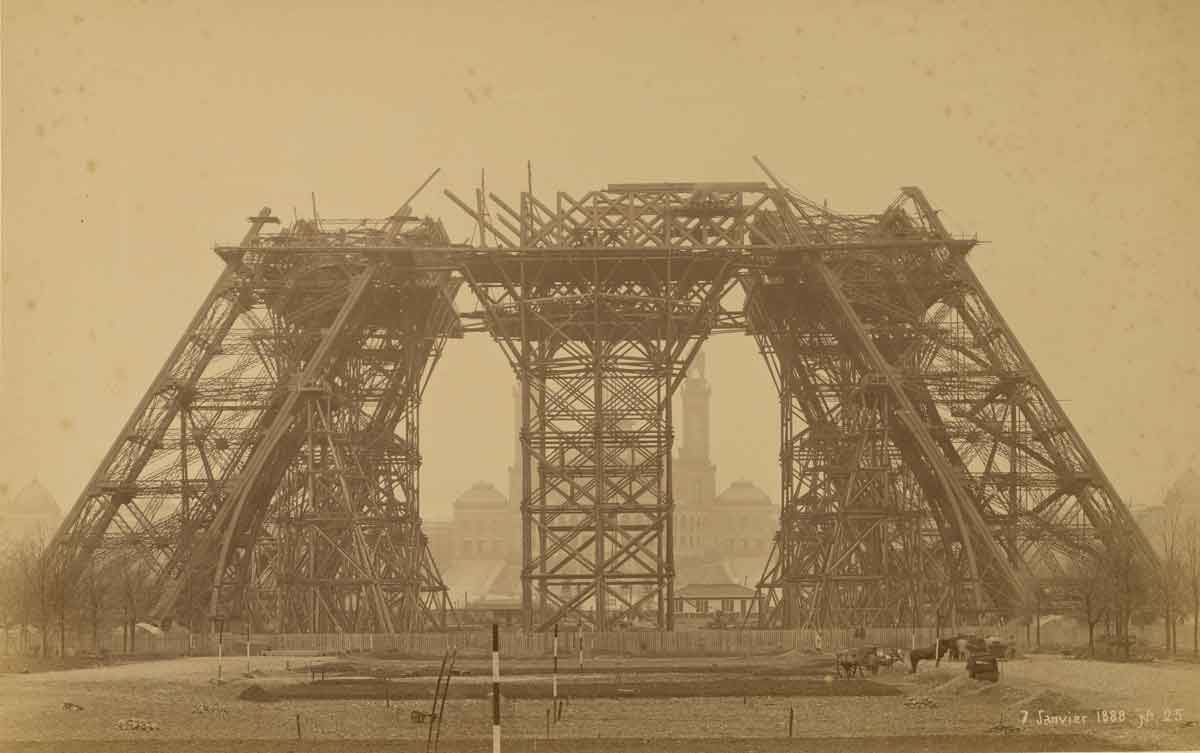 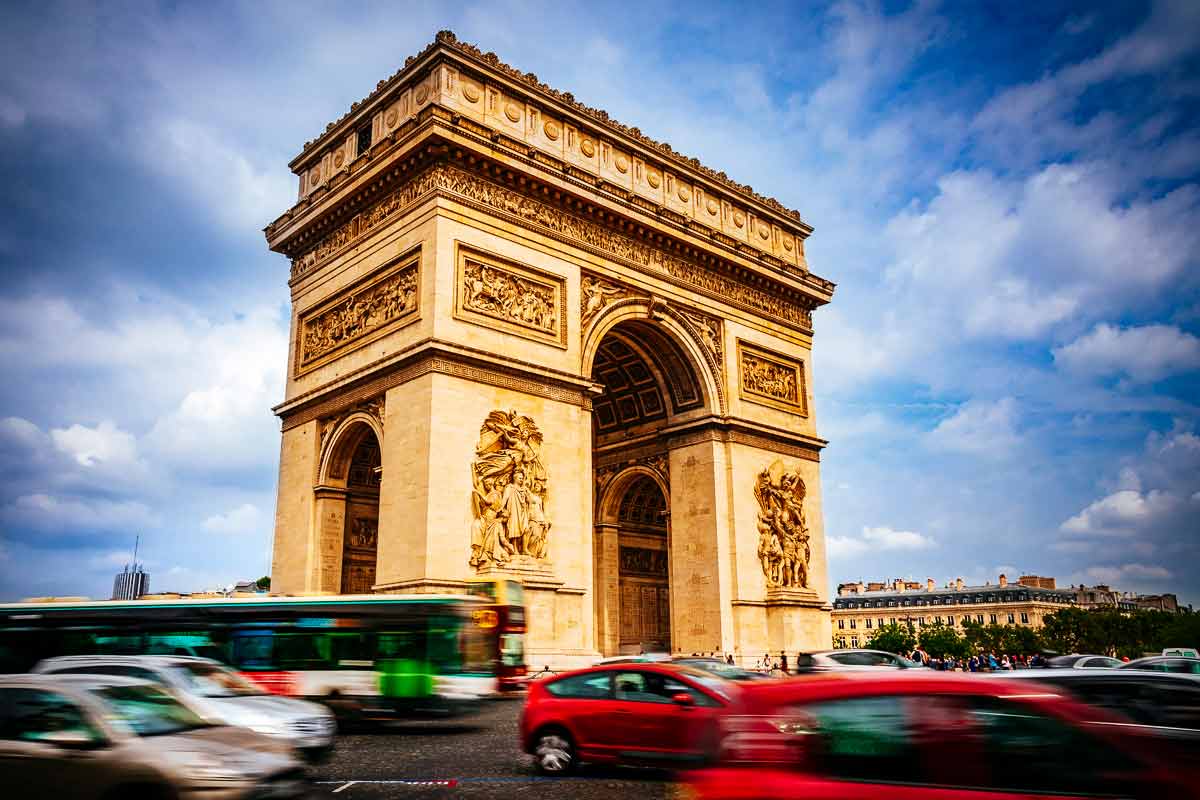 After a leisurely walk around the Eiffel Tower, we made our way across the Trocadero to the Arc de Triomphe. We had planned to go up on the Arc for the view, but the line was too long. Instead, we found a café on the Champs-Élysées, ordered champagne, and watched the world walk by. 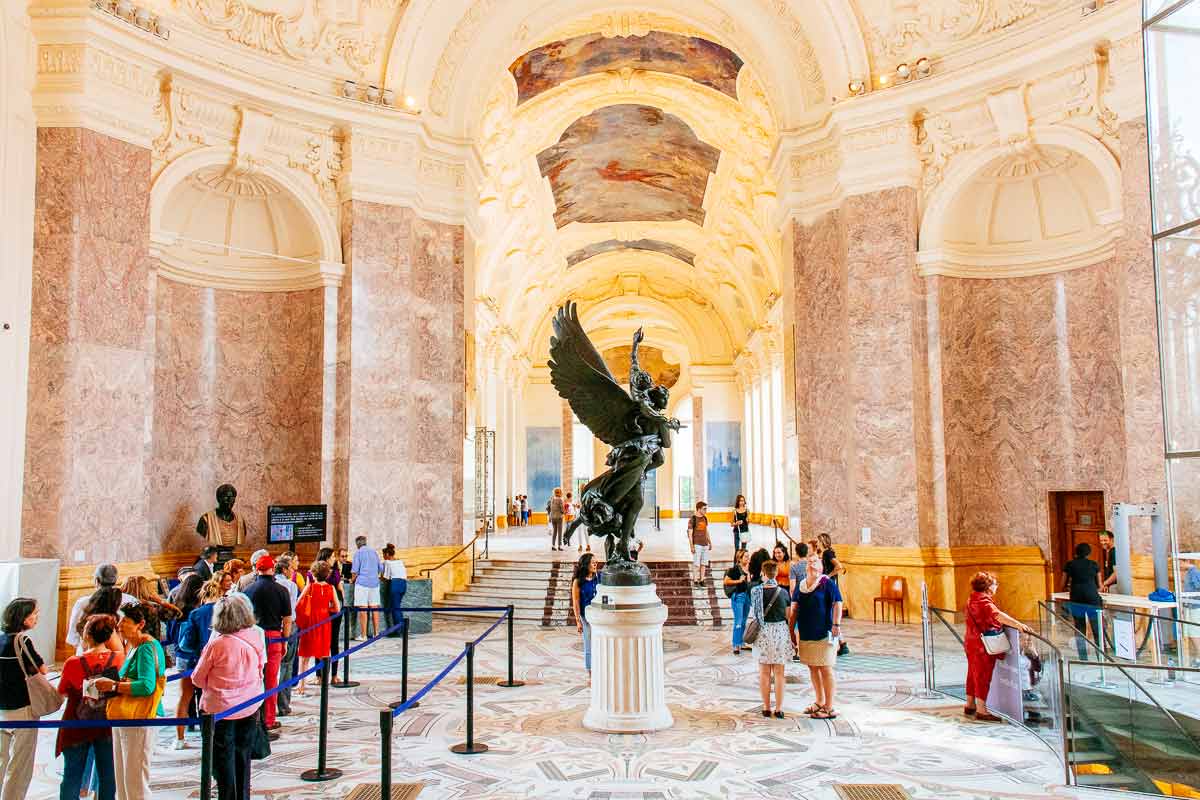 Champagne quaffed, we window shopped our way down the Champs to the Petit Palais. The Petit Palais was constructed in the Beaux Arts style for the 1900 Exposition Universalle. Today, the Petit Palais is an art museum with a collection that spans the 6th c. BCE through the 19th c. 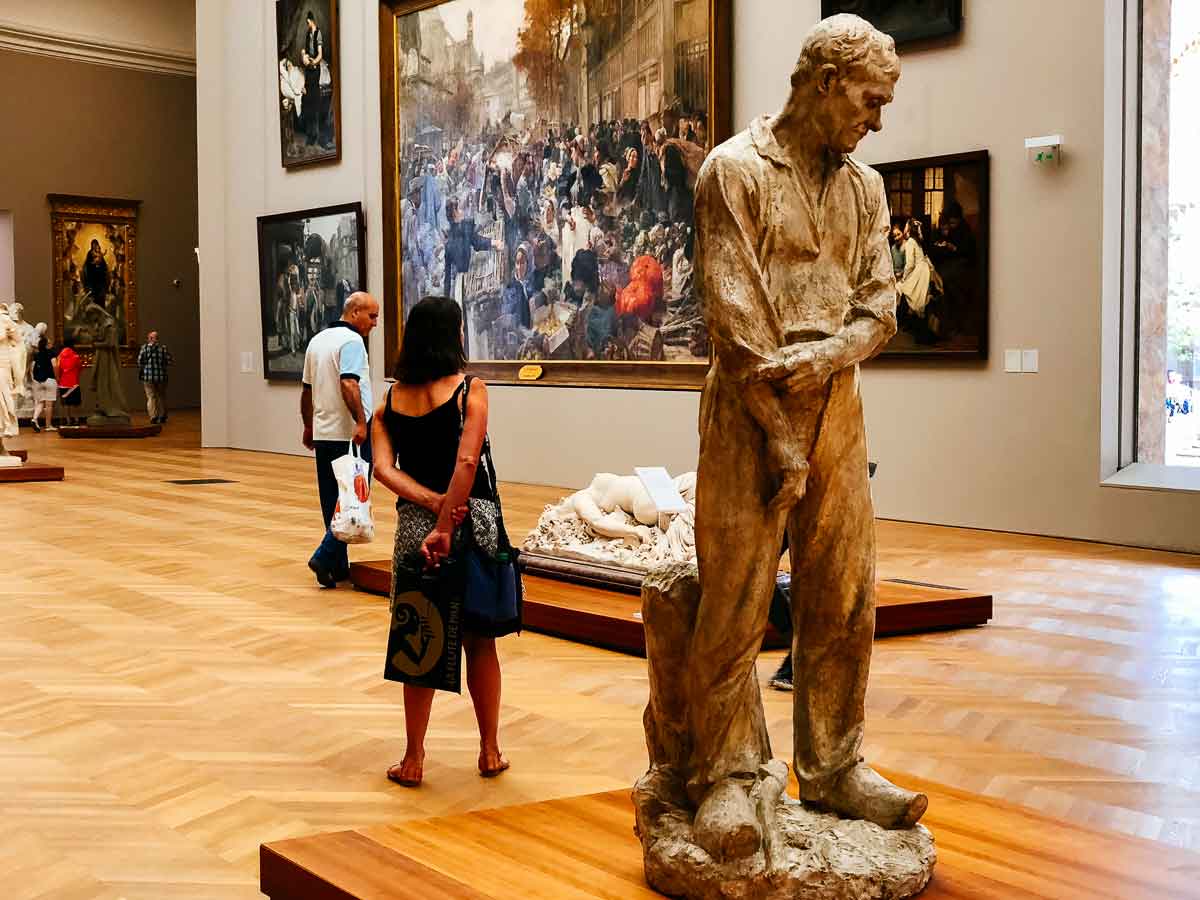 I found the art at the Petit Palais to be a bit underwhelming, but the building is beautiful. And free. Plus, they have a good café for lunch. 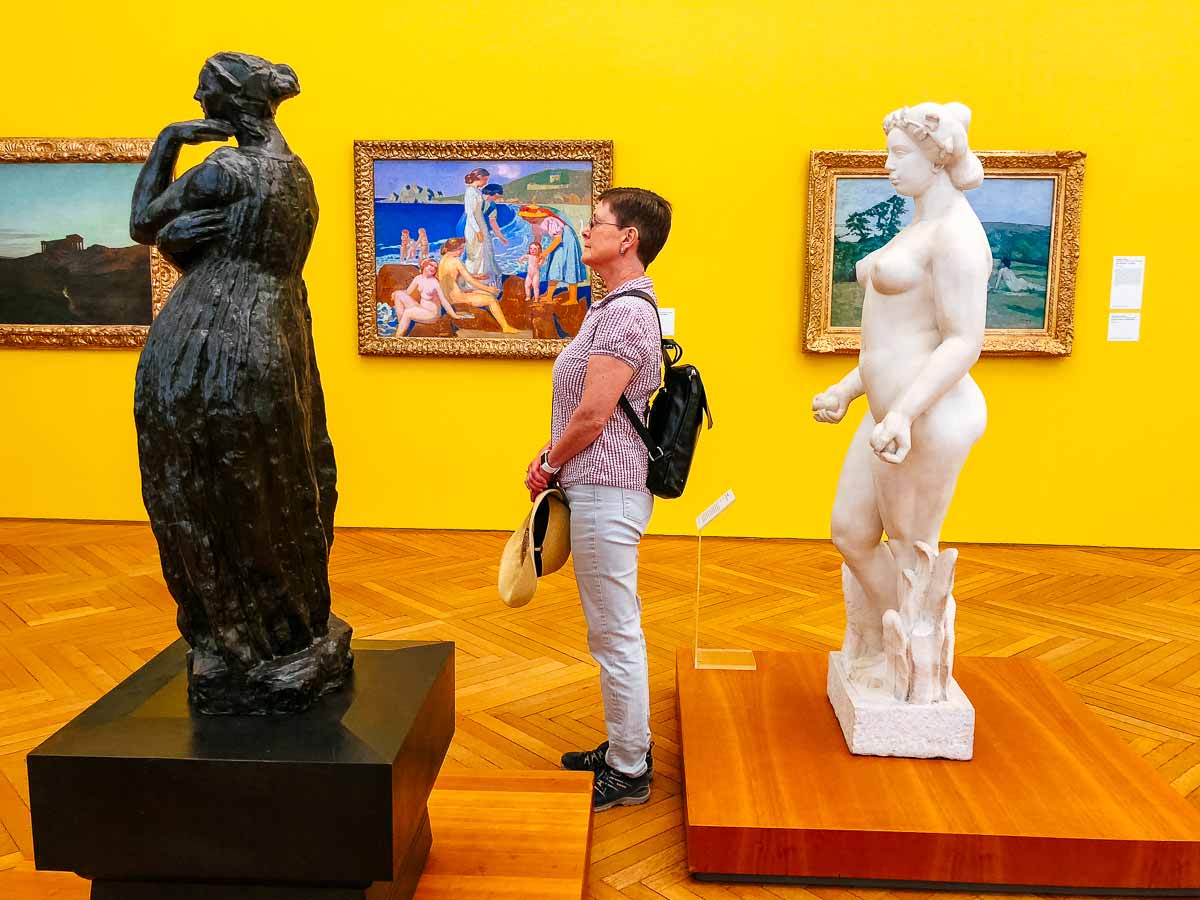 There must have been something interesting on the wall camera-left, but I never saw it. 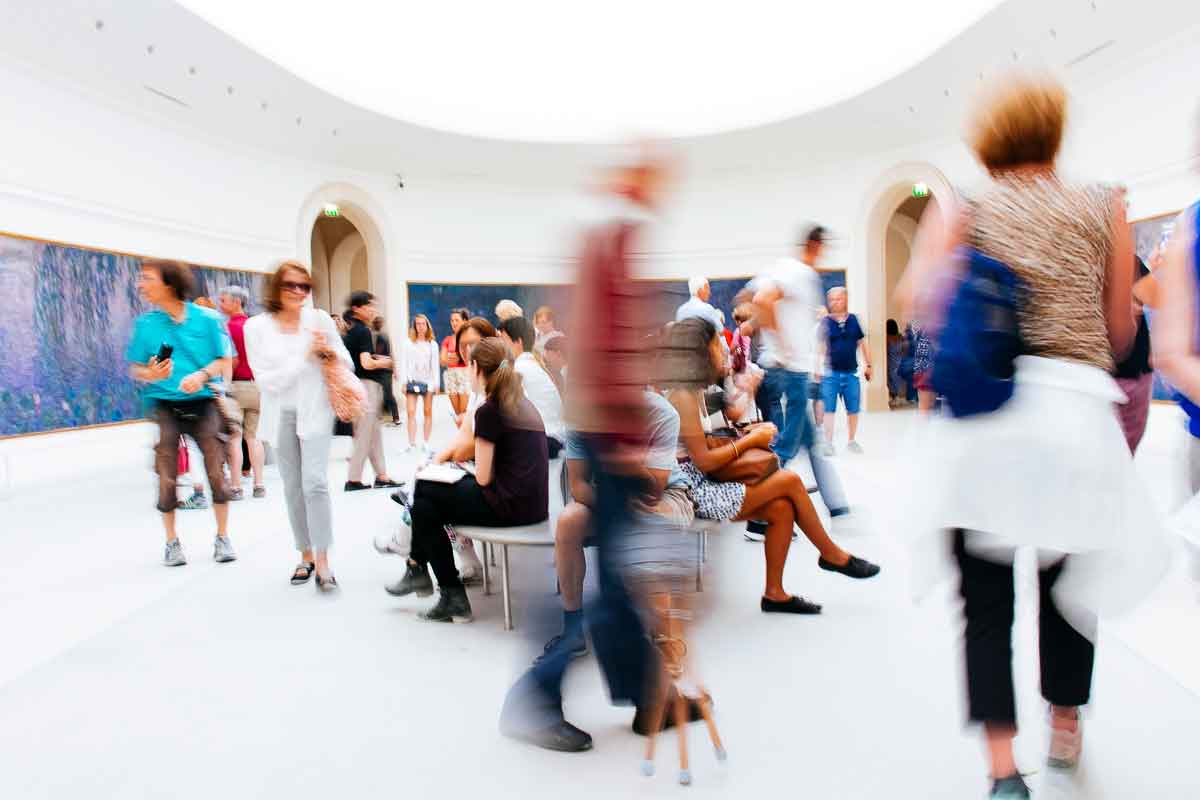 The Monets may be lovely, but it was impossible to tell. The two oval viewing rooms were full of people either taking selfies with the artwork or seated on the benches checking their phones, or staring into the distance. All this distraction caused the artwork to be nothing more than wallpaper to me. 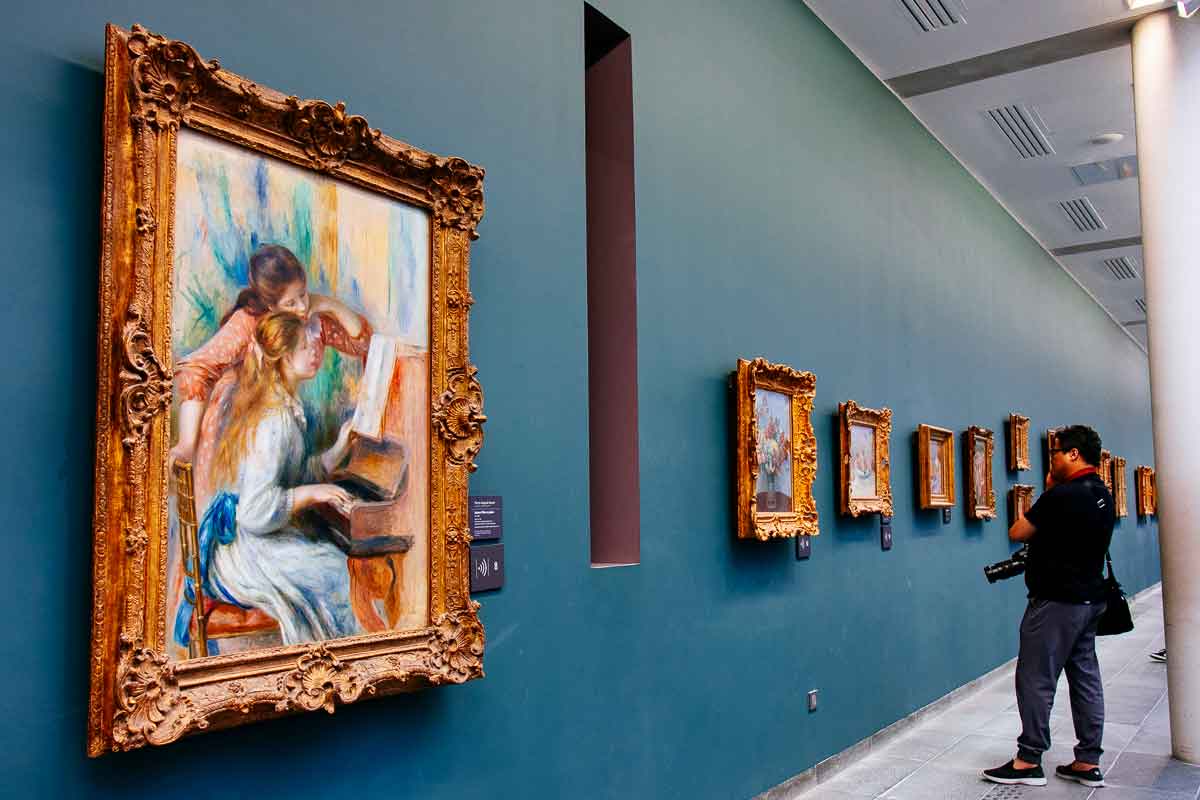 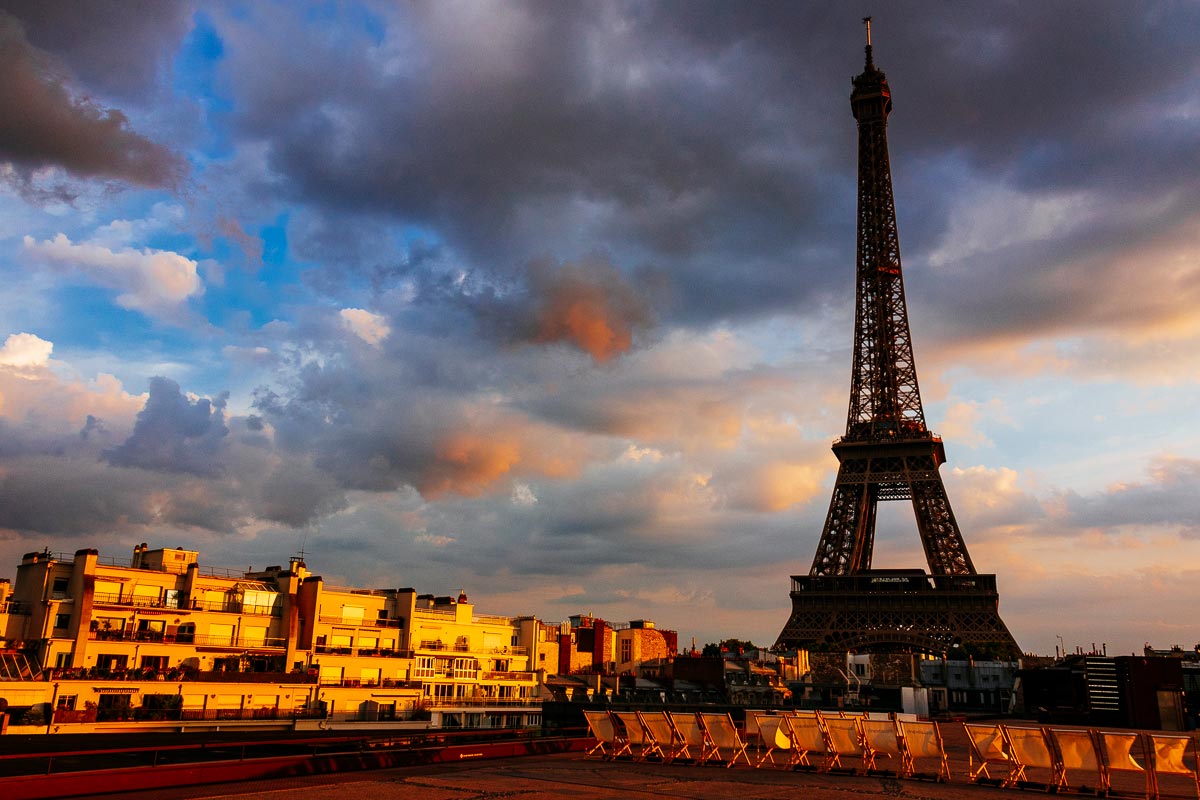 Continuing our theme of the Eiffel Tower, we had dinner at Les Ombres. The food is delicious, but the piece de résistance is this view. The Tower isn’t really leaning, that’s just the distortion from the wide angle lens I used. 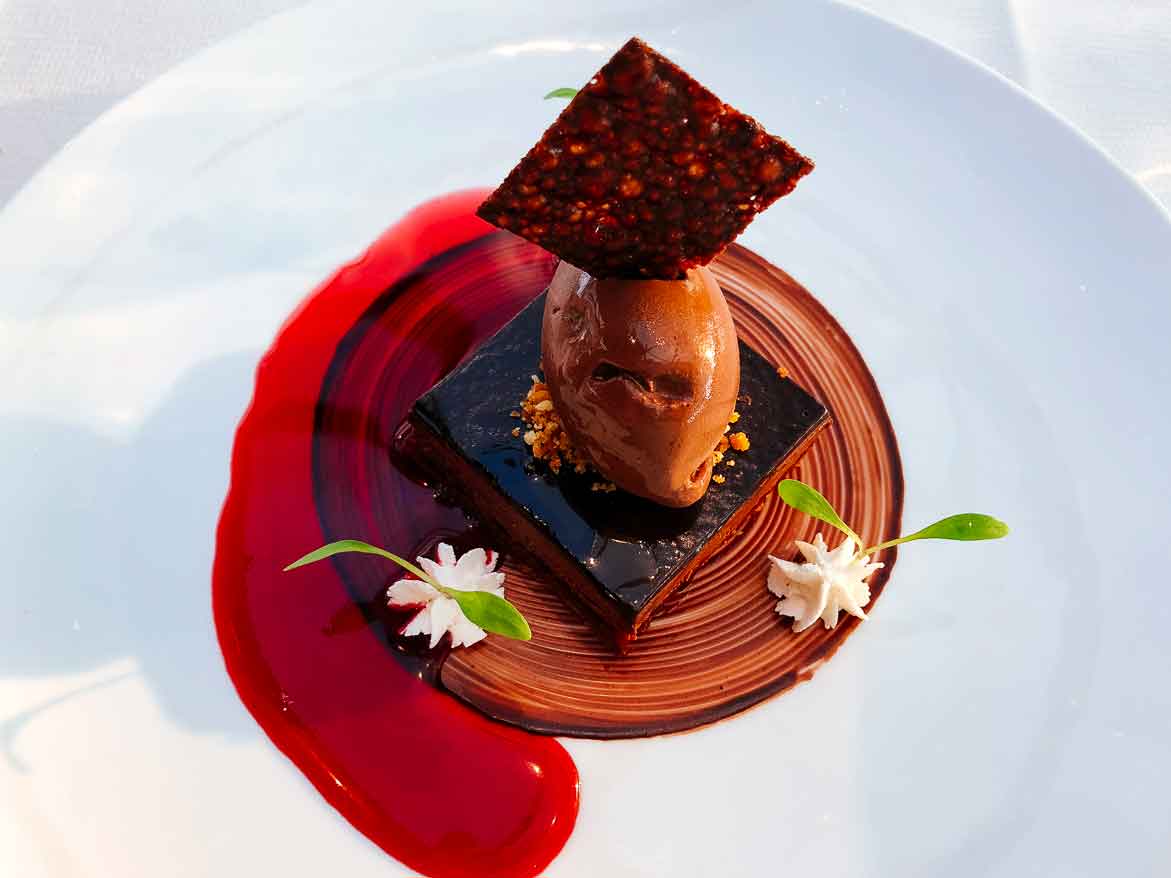 After a delicious dessert at Les Ombres, we go back to our hotel room to enjoy the Eiffel Tower sparkle one more time before we hit the sack. Tomorrow is Reims and Champagne.

But what about all the things we missed?

It is possible to have a relaxed day in Paris while enjoying history, culture and cuisine. True, we opted not to visit the Louvre, Notre-Dame, Sainte-Chapelle and so many other places, but that just means we have to go back another time. Quelle horreur!