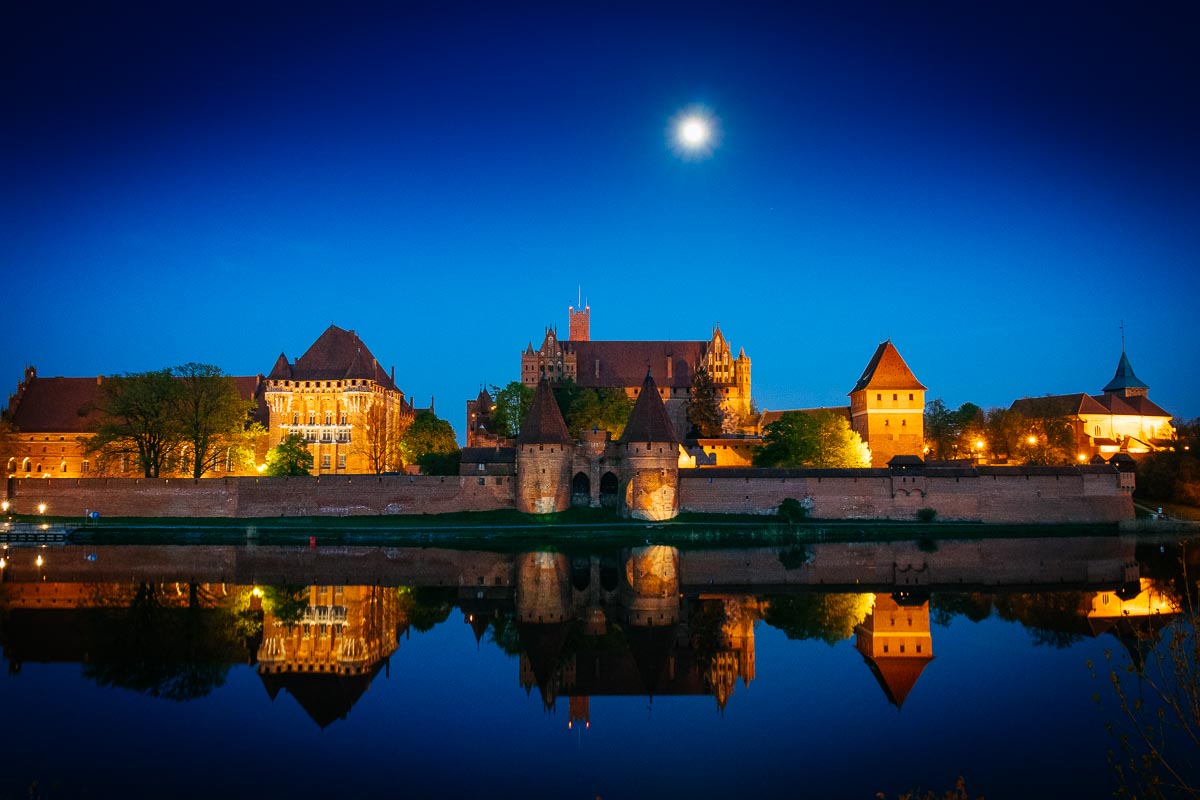 Marlbork Castle under a full moon, as seen from the opposite bank of the Nogat River.

The weekend was supposed to be unseasonably sunny and warm, so we wanted to take full advantage of it. We only had two days and the Baltic was still too cold for swimming; then why not visit the largest brick castle in the world1 ~ in Malbork?

What is Malbork Castle?

Malbork Castle is a huge, really cool medieval fortress on the southeastern bank of the Nogat River about 41½ miles south of Gdańsk. The Teutonic Knights began construction in the latter part of the 13th century and finished in 1406. In its life, Malbork Castle has belonged to the Teutonic Knights, the Kingdom of Poland, the Kingdom of Sweden, Prussia, Nazi Germany and now Poland. During WWII, more than half the castle was destroyed. Reconstruction began in 1962 and was completed in 2016. 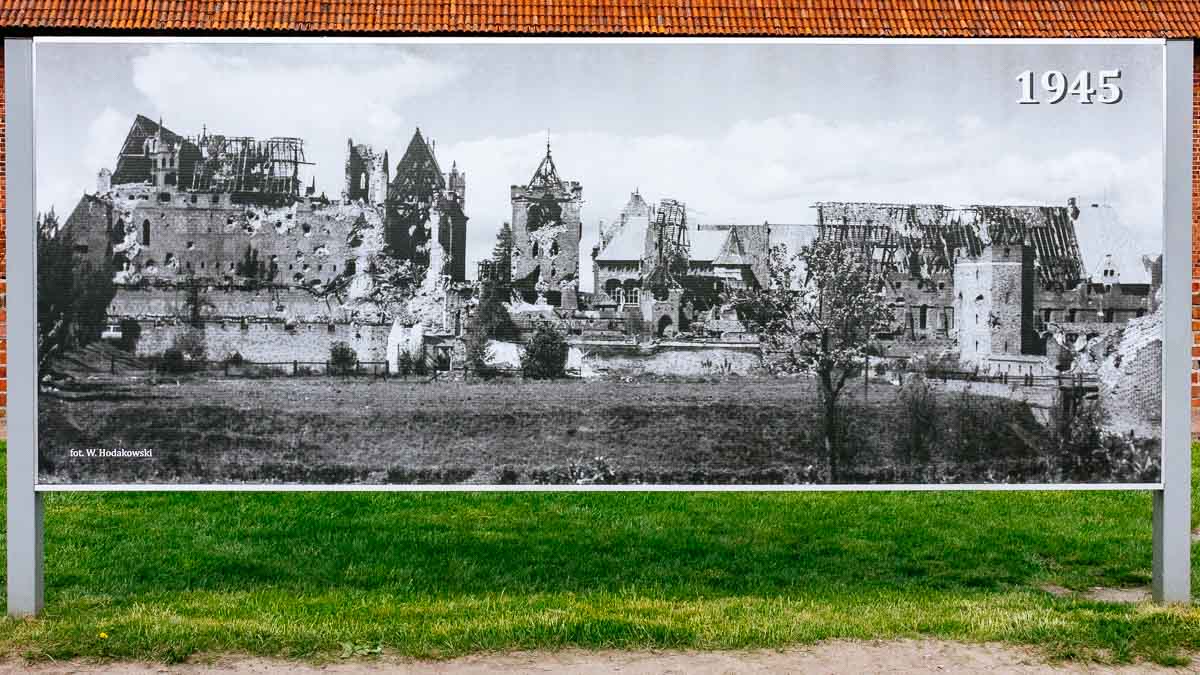 This photo, enlarged to billboard size, of Malbork Castle in 1945 is one of the first things you see when entering the castle. It shows that more than half the castle was destroyed during WWII.

We live about two hours west of Gdańsk, so the entire drive to Malbork, the eponymous city containing the castle, was 111 miles. We left after work on Friday and arrived at the hotel in time for a late dinner. 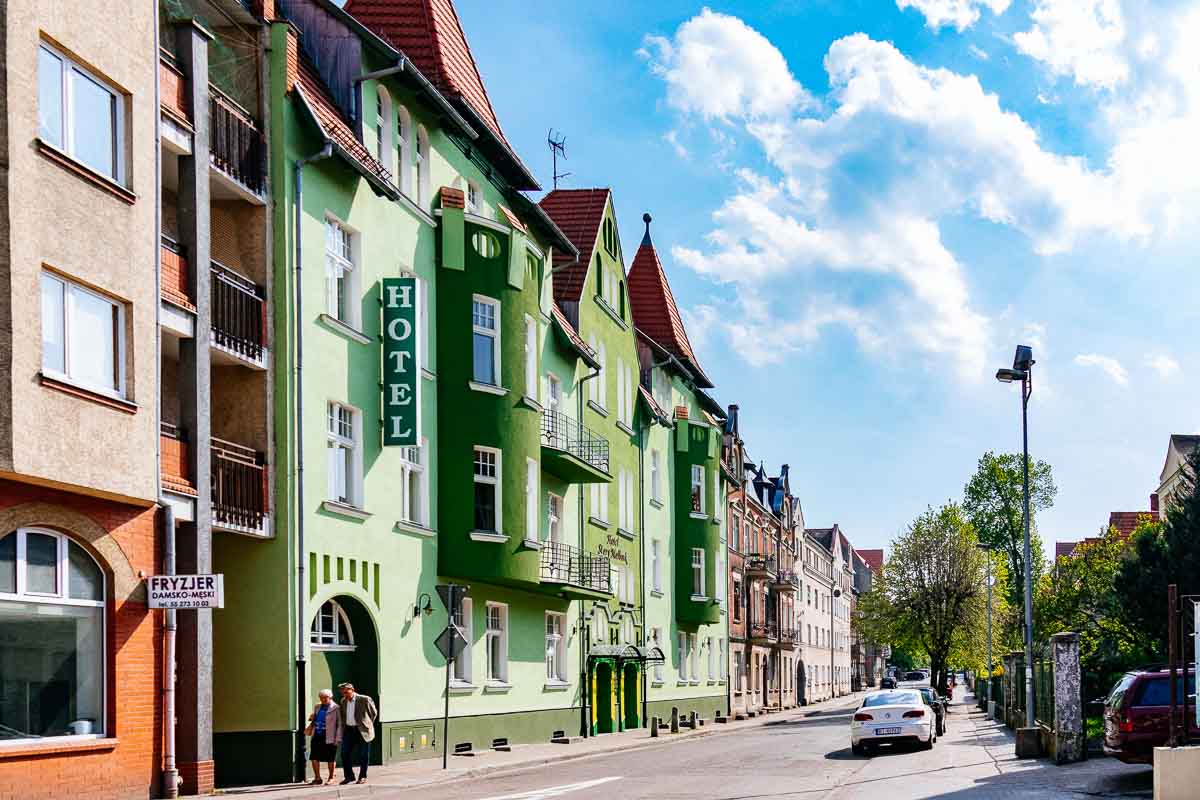 The hotel is only two short blocks from the main route. 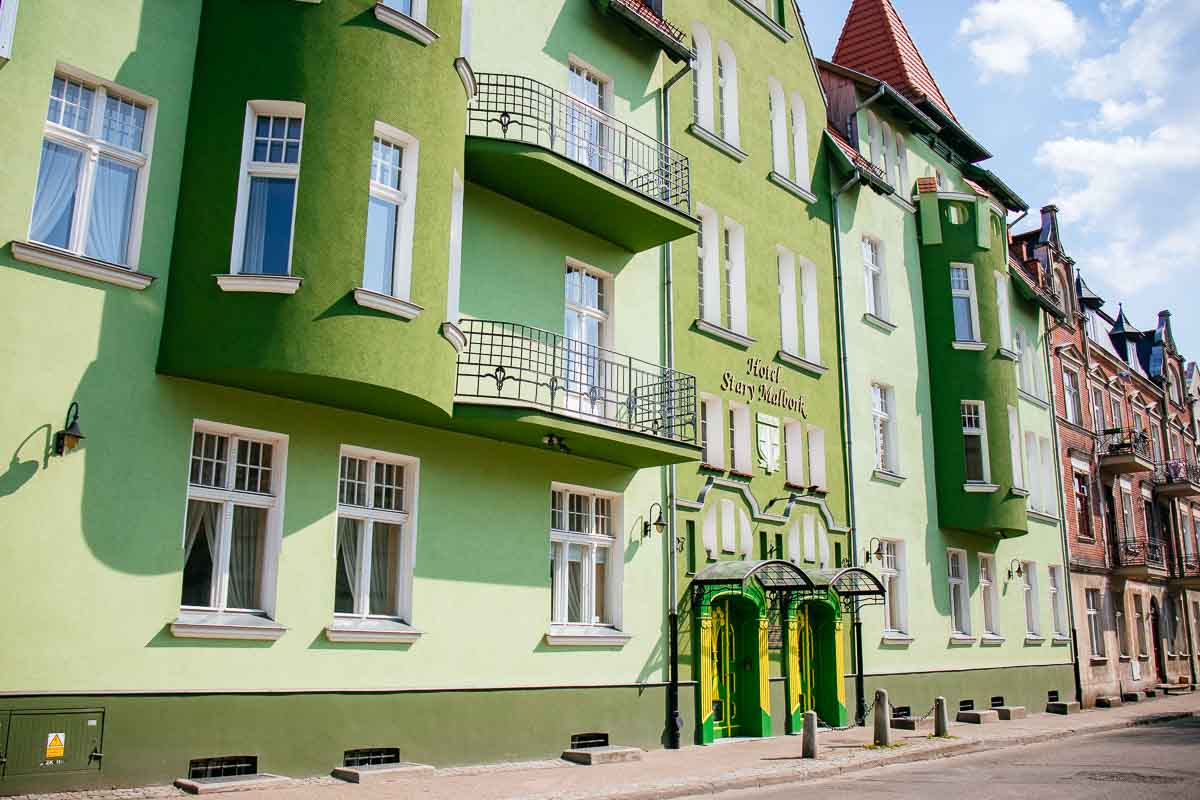 The neatly painted facade of the hotel.

Our spacious and comfortable room in the Hotel Stary Malbork.

We booked two nights at the Hotel Stary Malbork (Stary means old or historic). The hotel was constructed by joining two 19th c. tenement houses. It’s located two short blocks off the main route and it’s within easy walking distance of the castle.

The Stary Malbork has off-street parking, green space behind the hotel, a large park only a block away and accepts dogs. These features were critical because our 15-pound fluffy dog was with us.

After a delicious dinner of roasted duck and apples (me) and pork stew with red peppers over crispy potato pancakes (Rosemary), we walked the dog and crashed.

We opted for breakfast at the hotel. Even though breakfast was an additional small cost, it was much more convenient than trying to find breakfast elsewhere.

And what a spread! The tables were elegantly set, the staff brought a plate of fresh vegetables, cold cuts, a variety of breads plus coffee and tea. Additionally, they offered eggs or pancakes fresh from the kitchen.What a great start to the day.

After breakfast we fed and walked the dog, ensconced her in her crate in the room, and headed off to the castle.

Admission (with English audio guide) to the castle was only 39,50 zł (that’s about $11) each. The audio guide was GPS enabled, meaning that it knew when you entered or left an area and would then play the appropriate commentary. Very cool.

The castle walls enclose 52 acres (four times the enclosed area of Windsor Castle2) so we were grateful that the audio guides provided directions in addition to commentary. The audio guide did a good job of distilling over 700 years of history into manageable portions, but halfway through the tour we still needed a break. So we had lunch at the on-site restaurant. 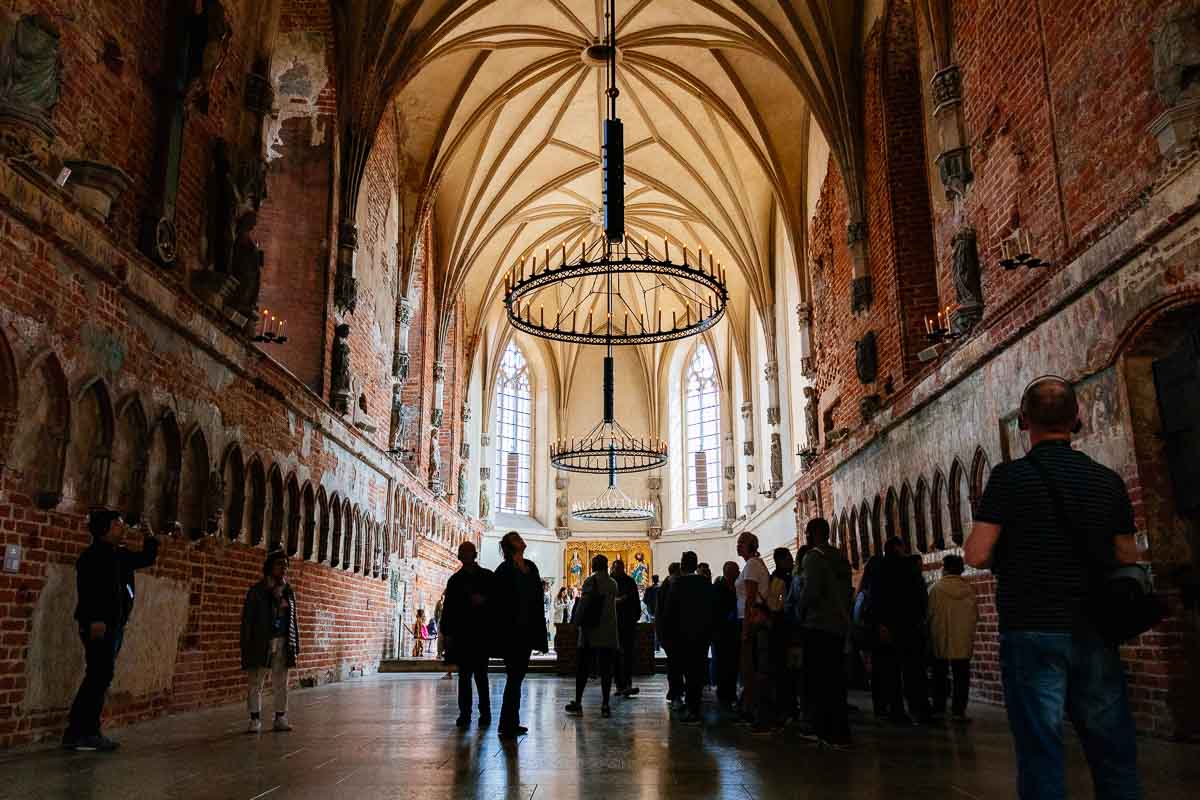 The full name of the Teutonic Knights is,”The Order of Brothers of the German House of Saint Mary in Jerusalem,” Saint Mary being, of course, the Virgin Mary. This church was built in the Upper Castle (the first part to be constructed) and was later enlarged. The Upper Castle was the heart of this monastic structure. 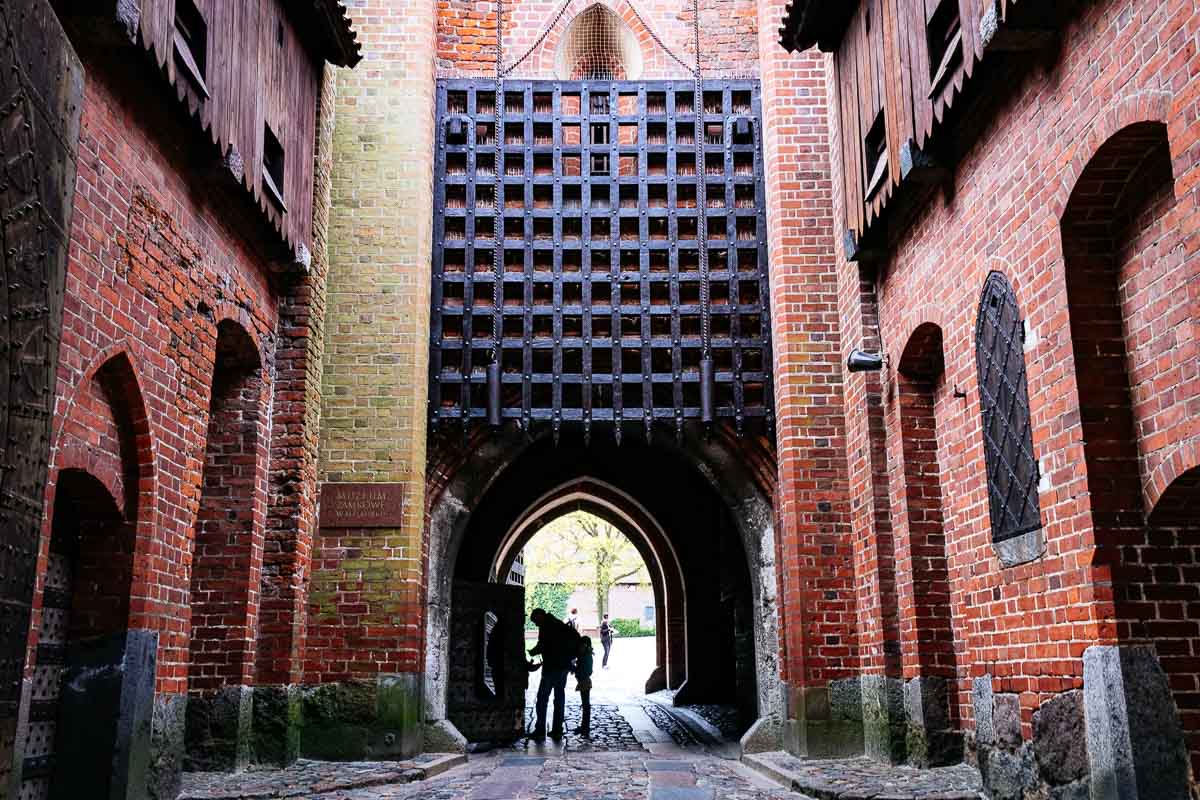 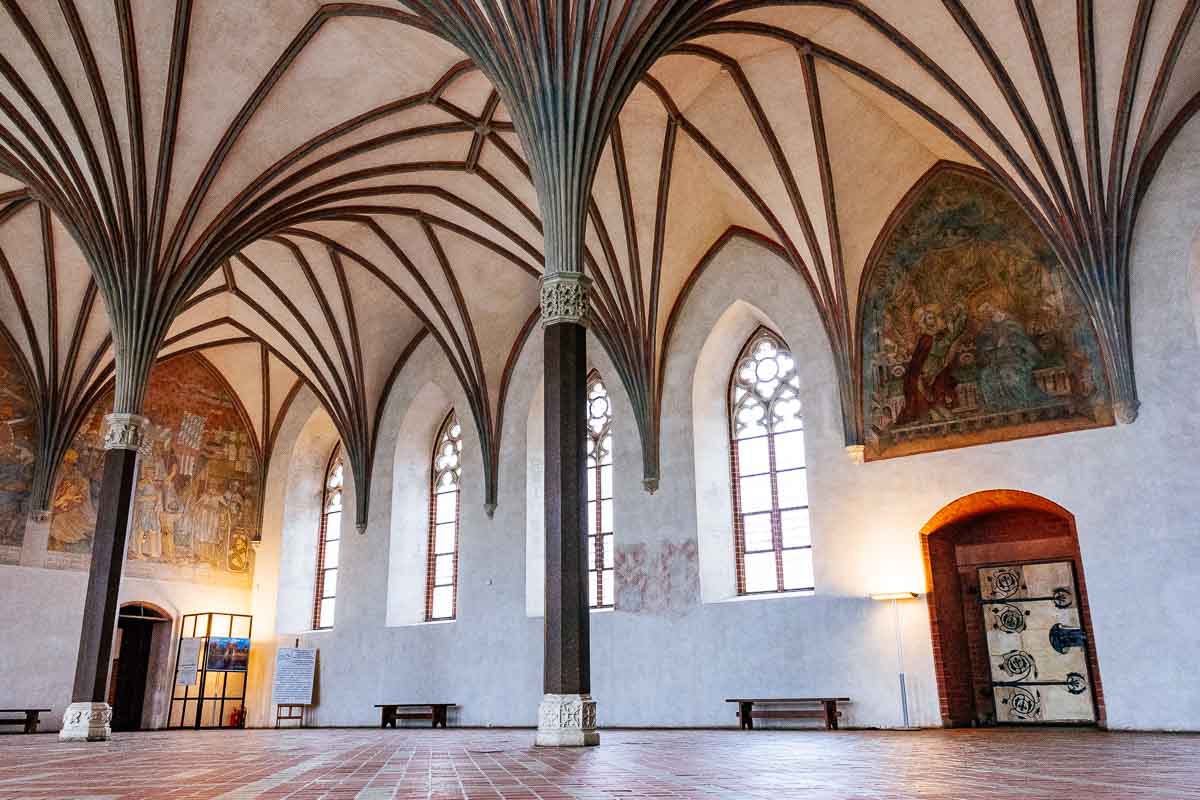 Also known as the Knights’ Hall, this room was for receiving visiting knights and guests. 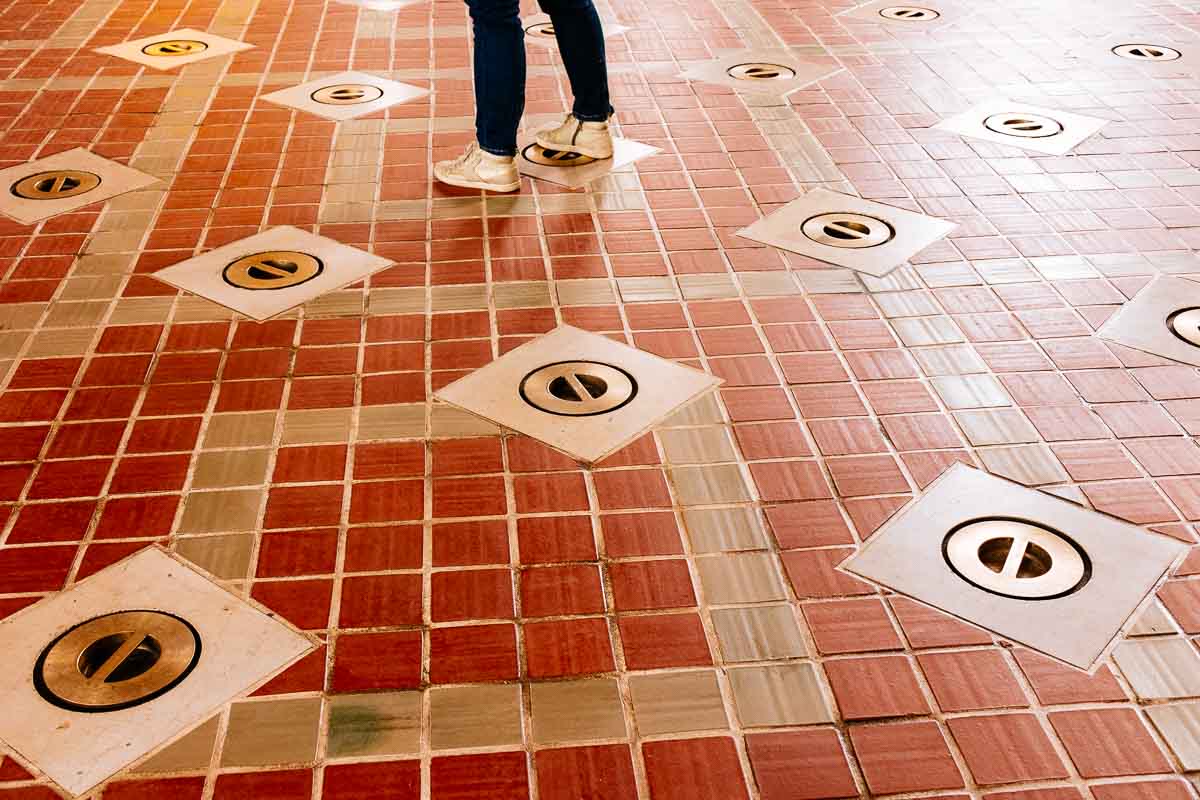 These discs in the floor are the vents for medieval under-floor heating known as “hypocaustum.” 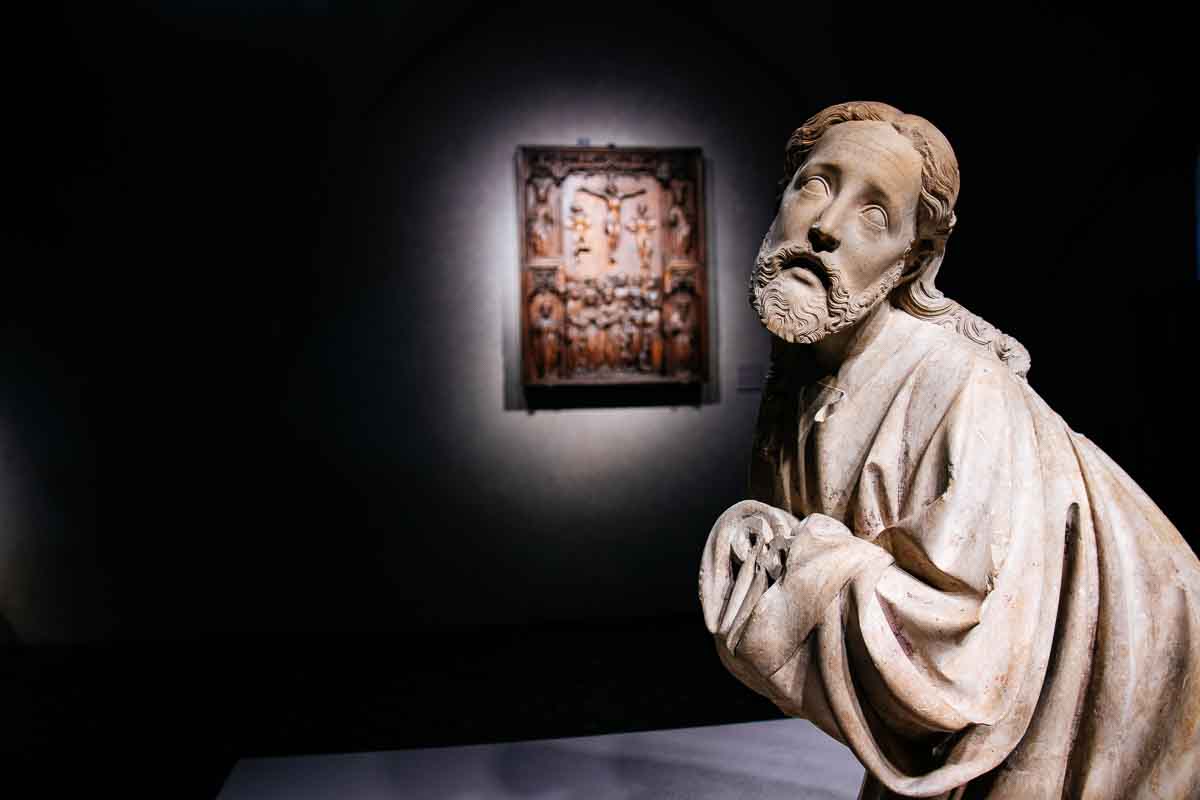 This statue, by an unknown artist, is one of many works of art in the castle’s collection. 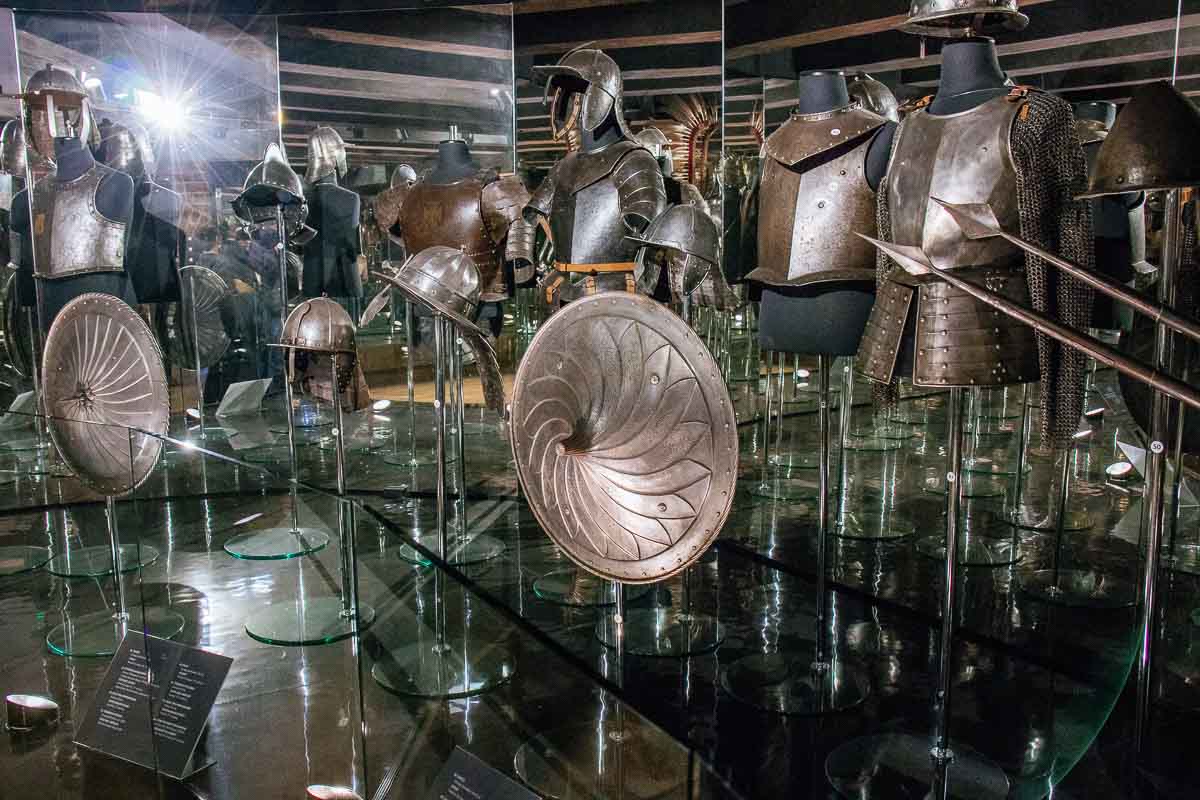 Malbork Castle also has an extensive collection of medieval arms and armor. 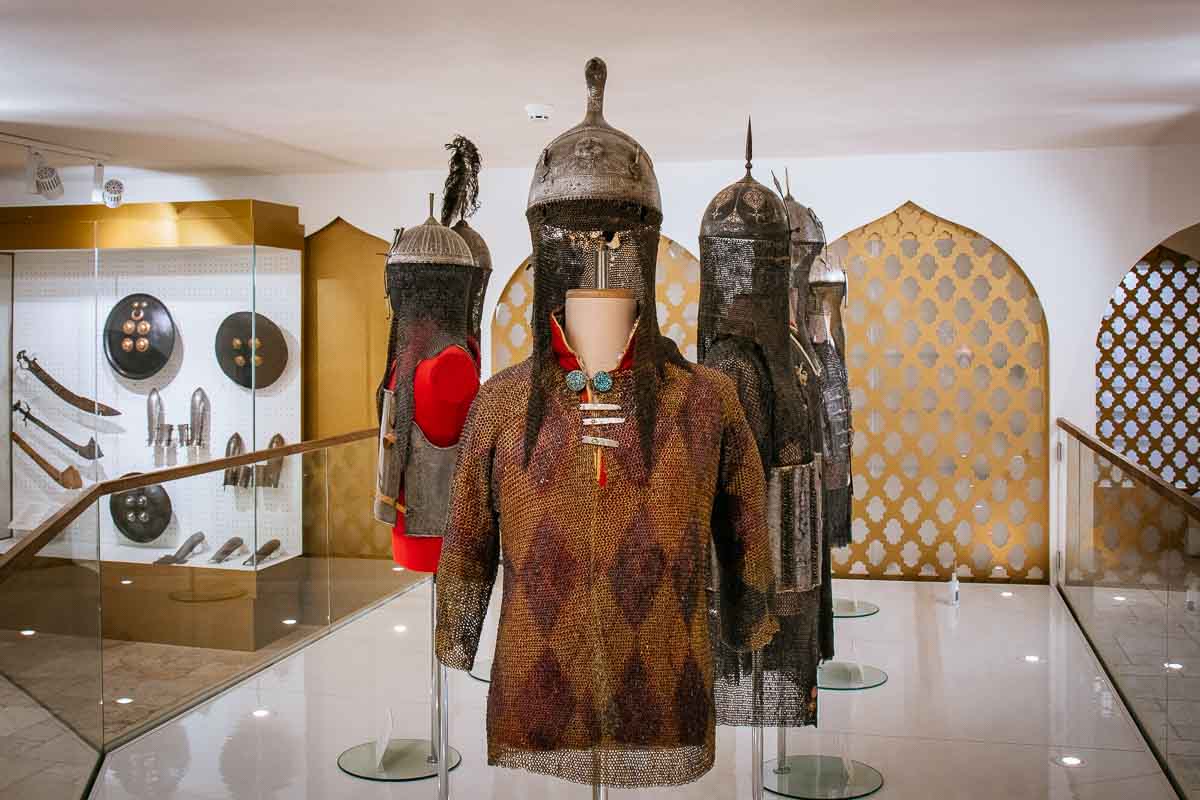 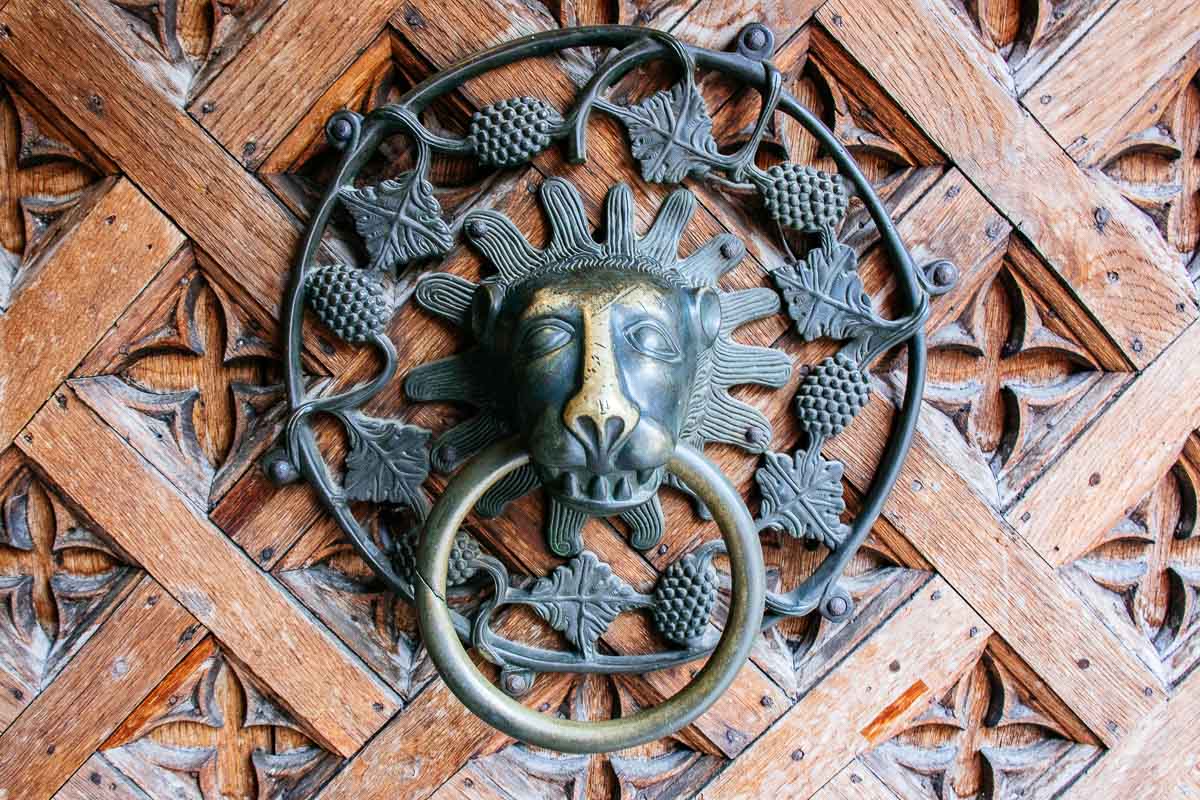 Exquisite iron works, like this knocker, are found throughout the castle.

How come my vegetable soup is red?

We both ordered the vegetable soup as the first part of lunch. Of course we were expecting something similar to Campbell’s soup, so we were surprised when the soup was red.

The vegetables in this vegetable soup were beets (hence the red color) and potatoes. It was delicious. As one of our colleagues says,

Order what you want and eat what you get.

What is The Ultimate Status Symbol?

Pierogi in the moonlight

The entire castle complex and Nogat River at sunset.

Marlbork Castle under a full moon, as seen from the opposite bank of the Nogat River.

We asked one of the hotel staff for a dinner recommendation and she recommended a bistro on the river opposite the castle. I had venison pierogi (delicious) and Rosemary had breaded fish (also quite good). Dessert was poached pear gelée on coconut cream. After dessert, we moseyed along the Nogat River back to the hotel, enjoying the views of the castle in the moonlight along the way. 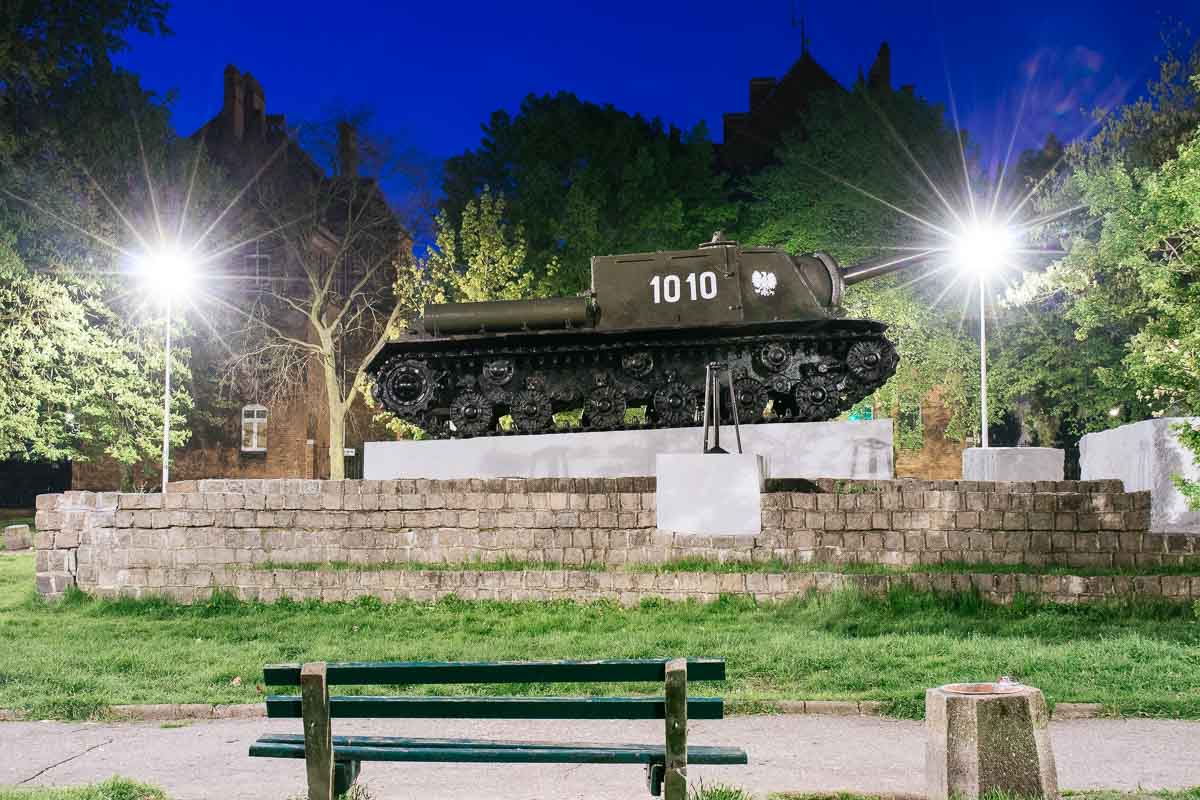 This Soviet-made ISU-122 self-propelled gun, which sits in a park close to the Hotel Stary Malbork, took part in the battle for Malbork in 1945. It was dedicated to “the heroes of the Red Army” in 1965. Note that the current markings features the White Eagle (Polish: Orzeł Biały), the national coat of arms of Poland.

We had another fabulous breakfast Sunday morning. Then, we packed up and went home, happy that we had spent our weekend wisely.

1as measured by land area.
2www.wikiwand.com/en/Malbork_Castle#/Origins