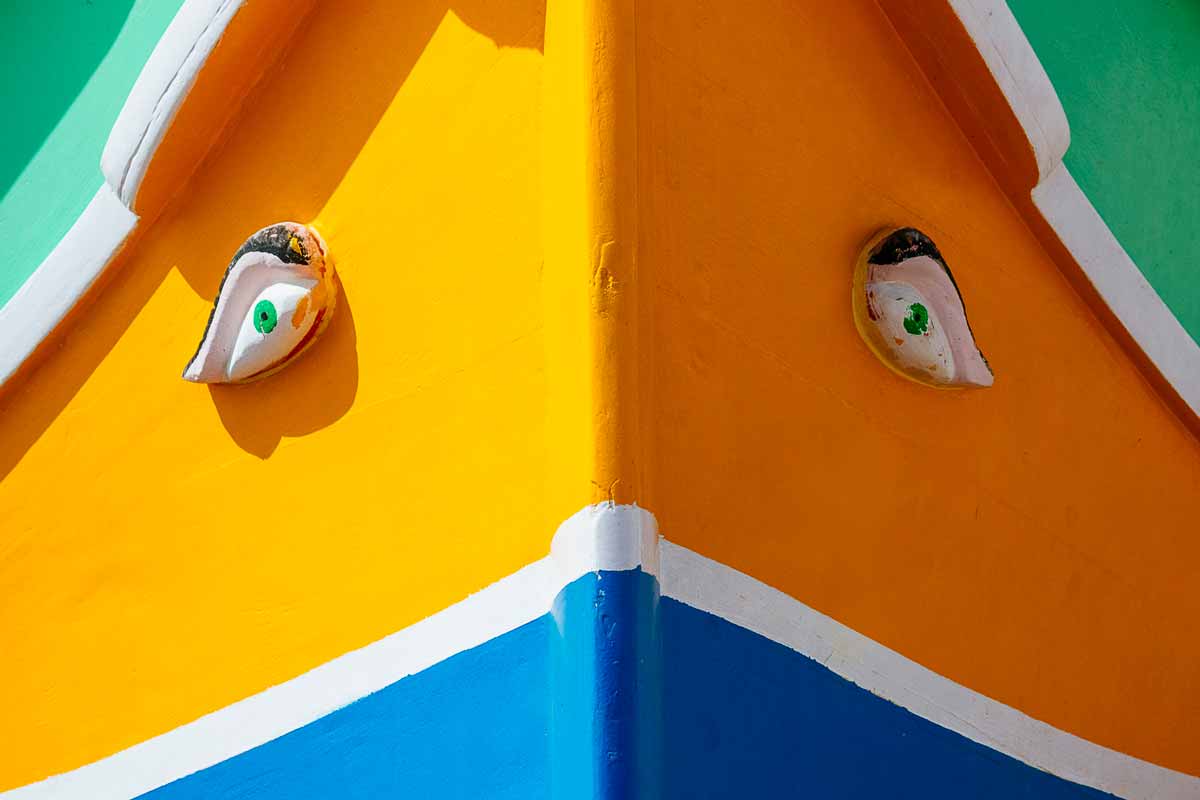 It is believed that the eyes on the bow of a luzza were from an ancient Phoenician / Greek / Egyptian custom called the “Eye of Horus” that protected fishermen while at sea.

At the tail end of this wet, grey, windy Polish winter, we needed a respite, no matter how brief. Searching for someplace sunny and warm in March, we decided on that Mediterranean island of “yells, bells and smells,”* otherwise known as Malta.

A two-hour drive to Gdańsk and a three-hour flight put us in Malta just after midnight. We collected our luggage and hailed a cab to take us to our rental apartment.

Our rental apartment in Valletta 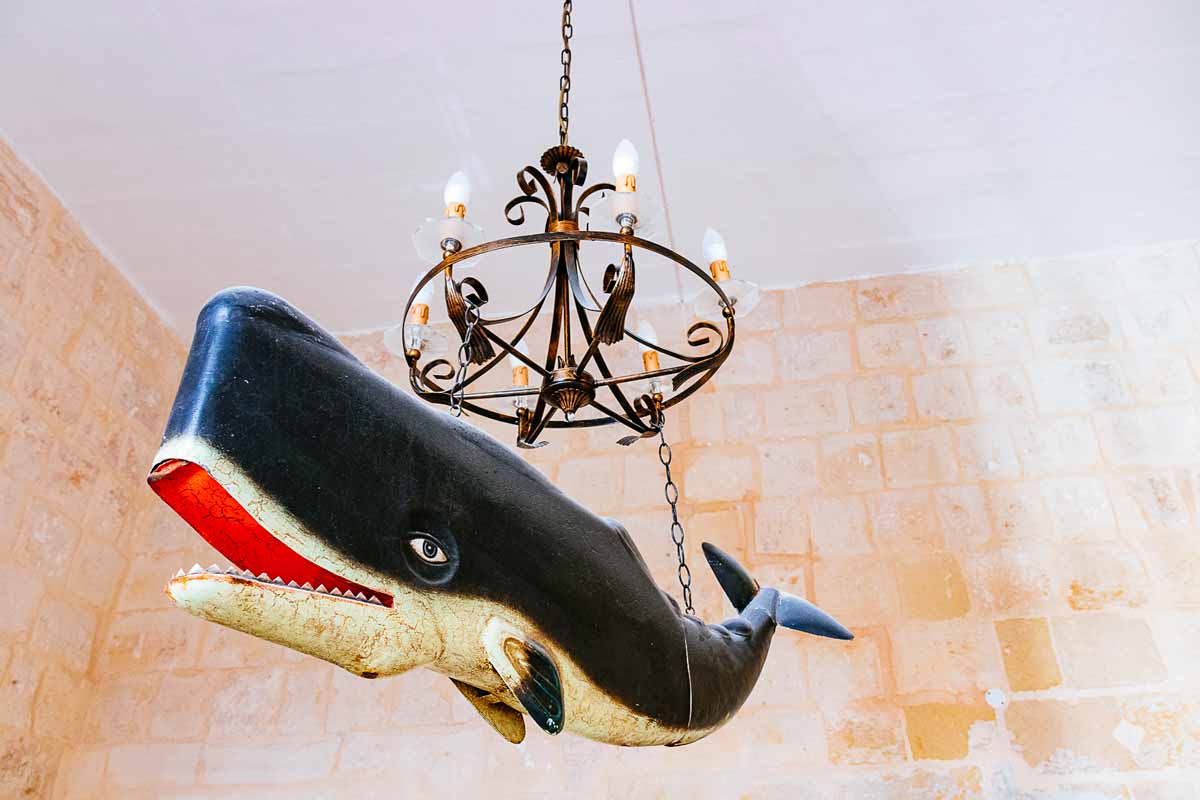 This charming whale was part of our rental apartment’s decor.

Valletta is the capital of Malta and a key location for restaurants, tours and things to do, so we chose a rental apartment there. Our rental apartment was in a great location on Merchant Street in downtown Valletta, only a couple short blocks from the shopping zone.

Because our address was on Merchant Street, the cabbie incorrectly assumed that our apartment was in the pedestrian-only zone and therefore he couldn’t drop us at our doorstep. Instead, he dropped us off on an adjacent street, telling us that our place was just around the corner.

He was wrong. He meant well, but he dropped us off over four blocks away. So at 1 am, feeling a bit tired, we stumbled downhill, suitcases in tow bumping over the cobblestones in the street, to our apartment.

Why choose a rental apartment rather than a hotel?

Staying in a rental apartment rather than a hotel has its advantages:

But a rental apartment also has disadvantages:

Our rule of thumb is that the advantages of a rental apartment only outweigh the disadvantages if we’ll be in one place for more than five nights. Otherwise, it just makes more sense to us to stay in a hotel. We were staying in Valletta for seven nights, so we chose the apartment.

So how was the rental apartment?

The good thing about this apartment was the location; it was close to everything in Valletta:

The bad thing about this apartment was the location: it was next to a bar that was really noisy late at night. Out of our seven nights there, we only had one night of good sleep.

But that’s the tradeoff of rental apartments: having a front-row seat to real life can be illuminating or sleep depriving. Or, in the case of this trip, both.

Many influences on Malta

Because of its strategic location in the Mediterranean, Malta has been fought over and occupied many times since at least 1,000 BCE. Influences from each of those cultures can still be seen today.

The Phoenicians and Luzzu, the traditional Maltese fishing boat 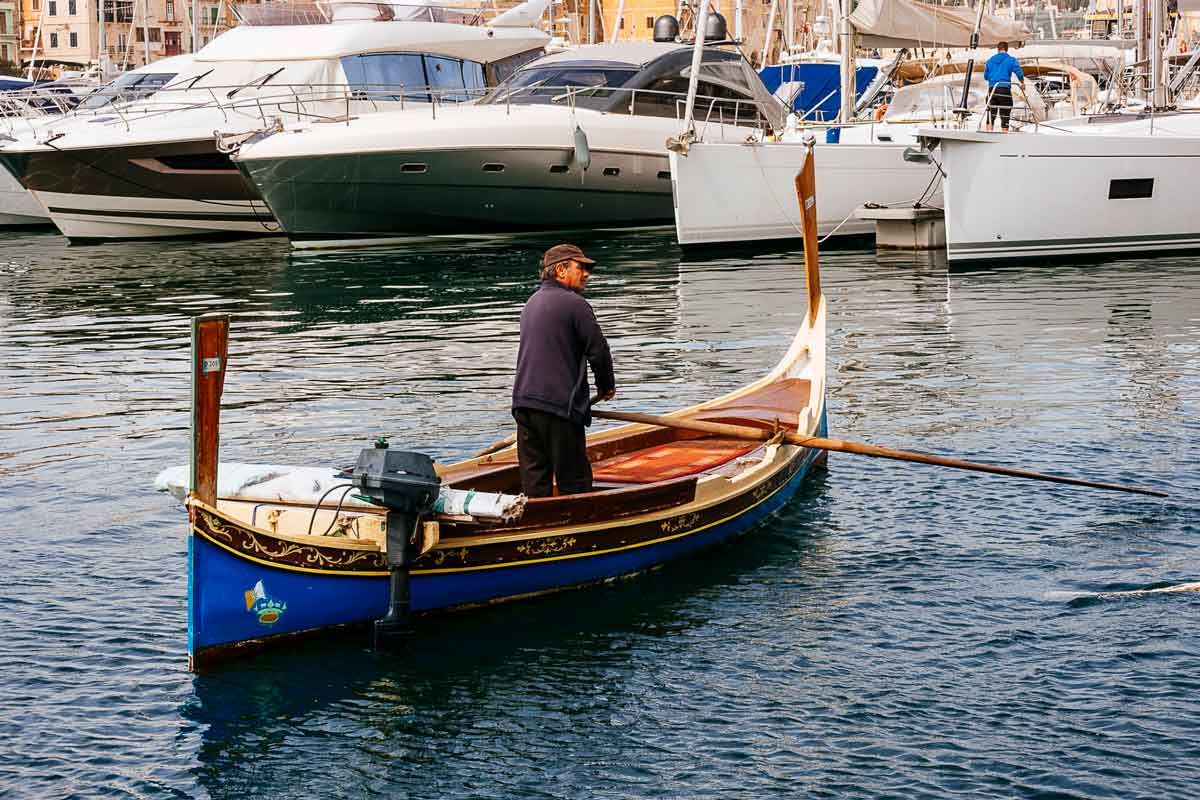 This traditional luzzu has been upgraded with an outboard motor. For only a couple of euro, these water taxis will take passengers across the Great Harbor.

The design of these boats is believed to date to Phoenician times (around 1000BCE). Lzuz (lzuz is the plural of luzzu) are sturdy, double-hulled and stable in bad weather. They are usually brightly painted in yellow, red, green and blue with a pair of eyes mounted on the bow. It is believed that these eyes were from an ancient Phoenician / Greek / Egyptian custom called the “Eye of Horus” that was to protect fishermen while at sea.

The Knights of Malta and the Maltese Falcon 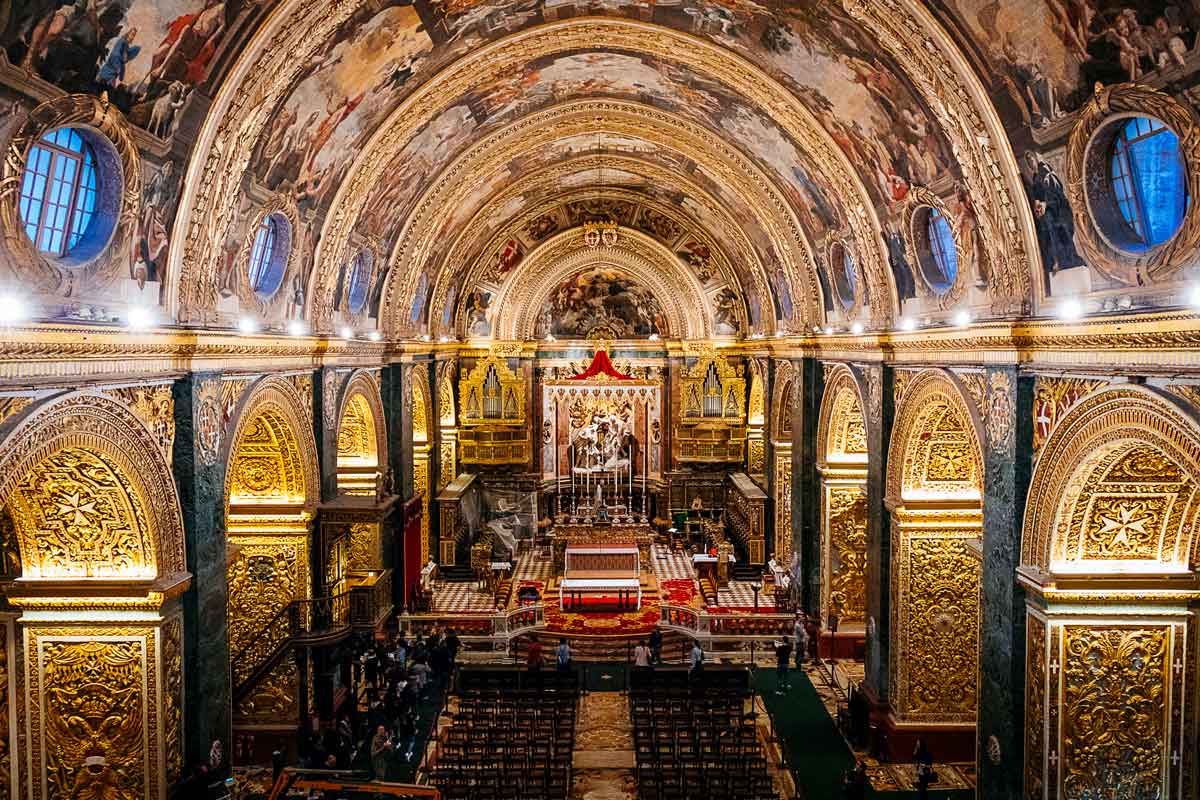 The Knights of Malta commissioned St. John’s Co-Cathedral in 1572. Two famous paintings by Caravaggio are on display here.

Of course, any trip to Malta has to include the Knights of Malta and their famous falcon. The Knights of Malta (formal name: Knights Hospitaller or The Order of Saint John) were a medieval Catholic military order that was given control of Malta in 1530 by Charles I of Spain. In return, the Knights were required to pay an annual fee of a single Maltese falcon, payable on All Saints Day (November 1st). This is known as the Tribute of the Maltese Falcon. This is the basis for Dashiell Hammett’s book The Maltese Falcon and the subsequent movies.

The Knights were responsible for much of modern Malta: 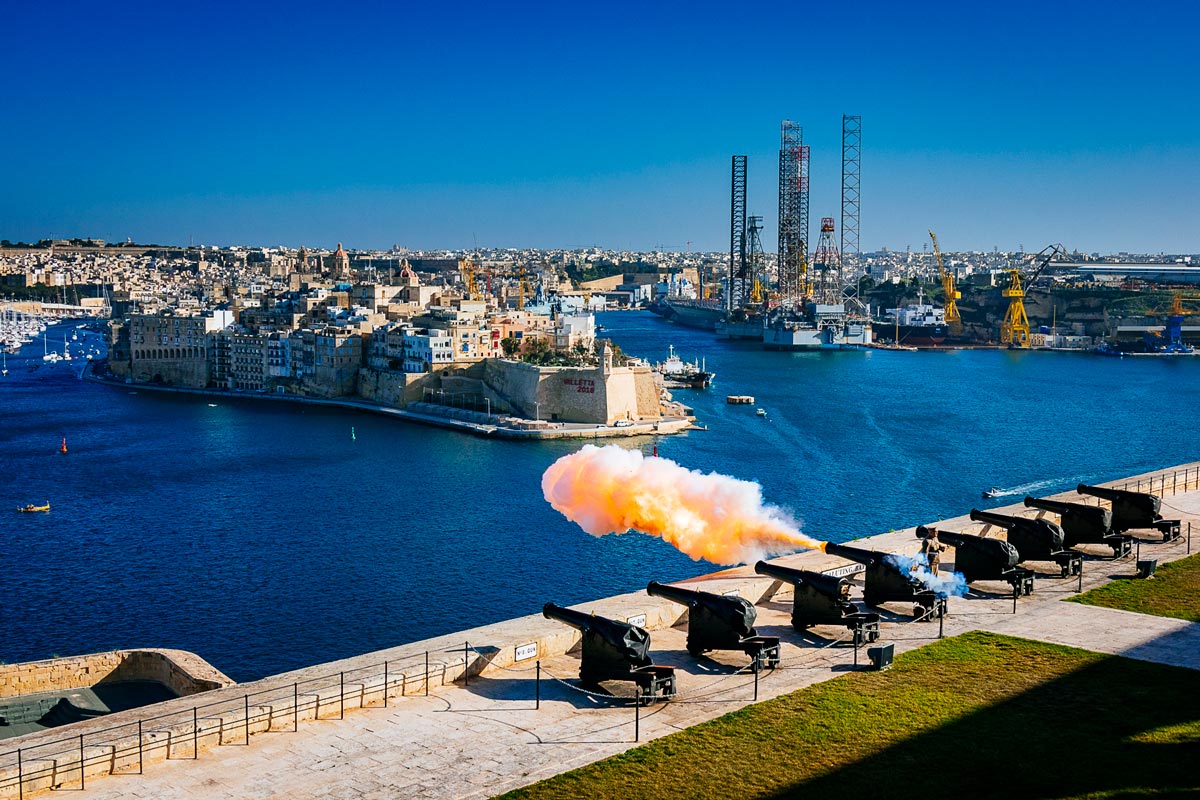 From 1800 until 1923, the saluting battery fired a daily shot at noon so that ship-masters on board ships could synchronize their ship’s clock. This was critical as the ship’s clocks were used to find longitude while at sea.

Our first full day in Valletta was wonderfully sunny and we devoted it to getting groceries and exploring. Valletta is compact, so it’s easy to explore on foot. As we walked around the city, we noticed the ongoing British influence:

No surprise since Malta was part of the British empire for 150 years.


Malta is a scant 60 miles from Sicily, so it’s no surprise that there is a strong Italian influence on the island. Pasta dishes and pizza are ubiquitous; Italian wines, particularly Sicilian and Puglian, are well-represented on wine lists; and Italian is widely spoken. Our wine-tour guide told us that he learned Italian by watching the cartoons on Italian TV channels when he was growing up.

The Arab influence in Malta: the Maltese balcony 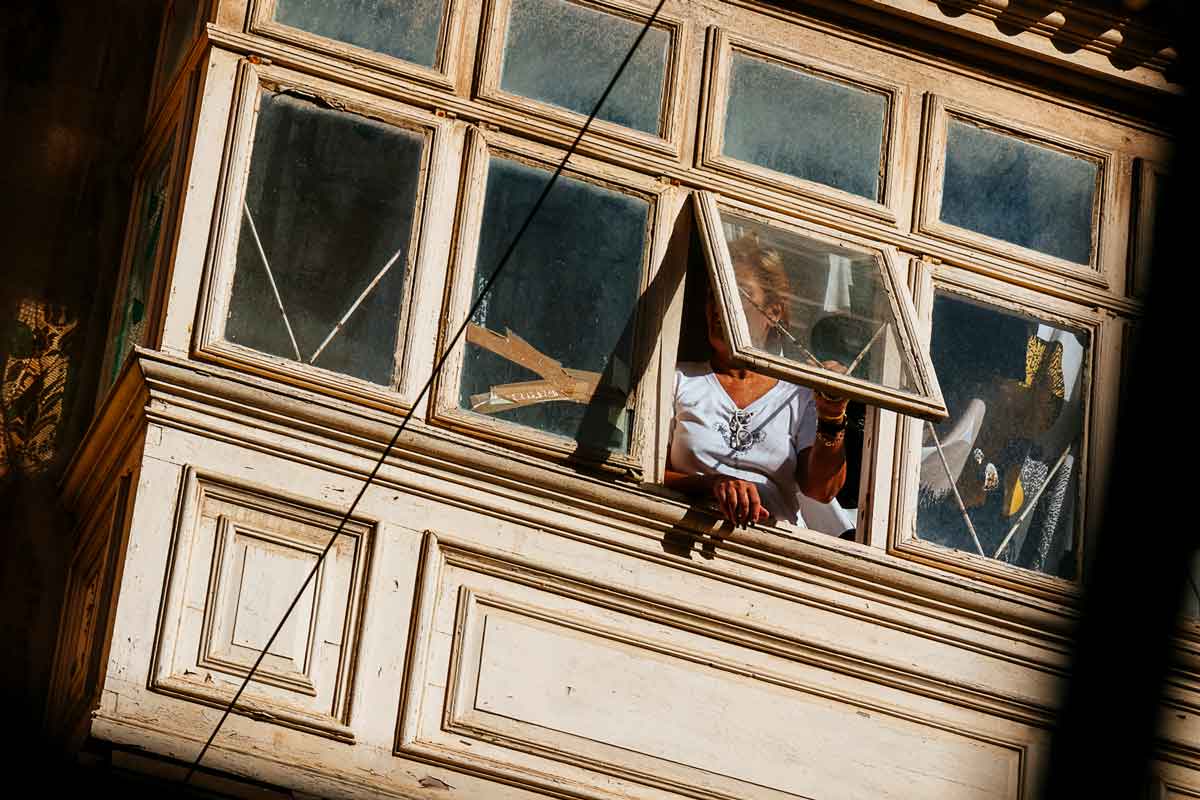 Many websites and some people, including our wine-tour guide, say that the Maltese balcony originated during the Arab rule around 1000 A.D. Supposedly the balconies were built so that women could “see but not be seen” and not have to leave their houses. Others attribute the balconies to Aragonese (from central Spain) influence, others claim that Turks originated the idea. Regardless of their origin, Maltese balconies are a distinctive / iconic symbol of Malta.

How to see Malta: hop on hop off 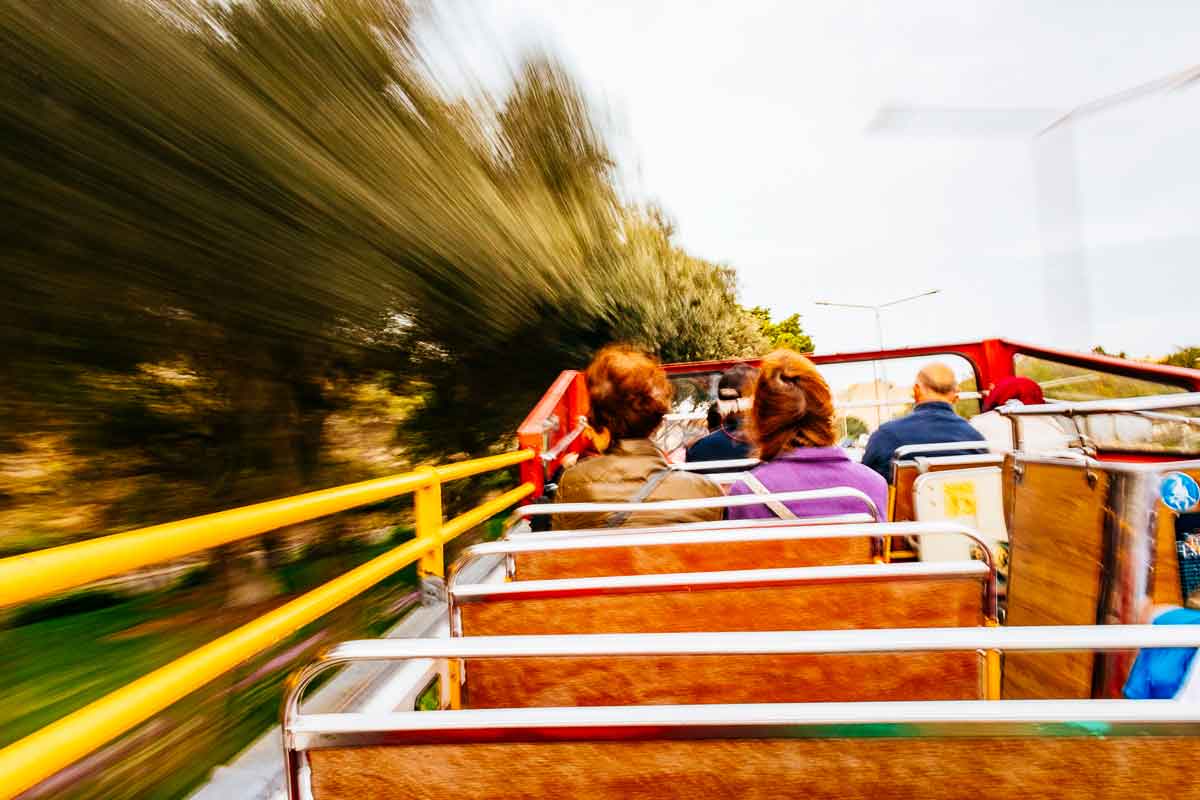 Utilizing the hop on hop off tour buses was a great way to see the island of Malta.

We chose not to rent a car because we couldn’t imagine retraining ourselves to drive on the “correct” side of the road without a lot of practice ~ we would’ve been an accident waiting to happen. Instead, we used the hop on / hop off buses to tour Malta.

Why choose the hop on / hop off (HOHO) buses?

We chose the HOHO buses, rather than taxis or specific tours, because of their flexibility and their coverage. Malta is a fairly small island so that over the course of two days we were able to cover the entire island. Their flexible schedule meant that we could get off at the attractions that interested us and then pick up another bus later. This was a great way to see the entire island. 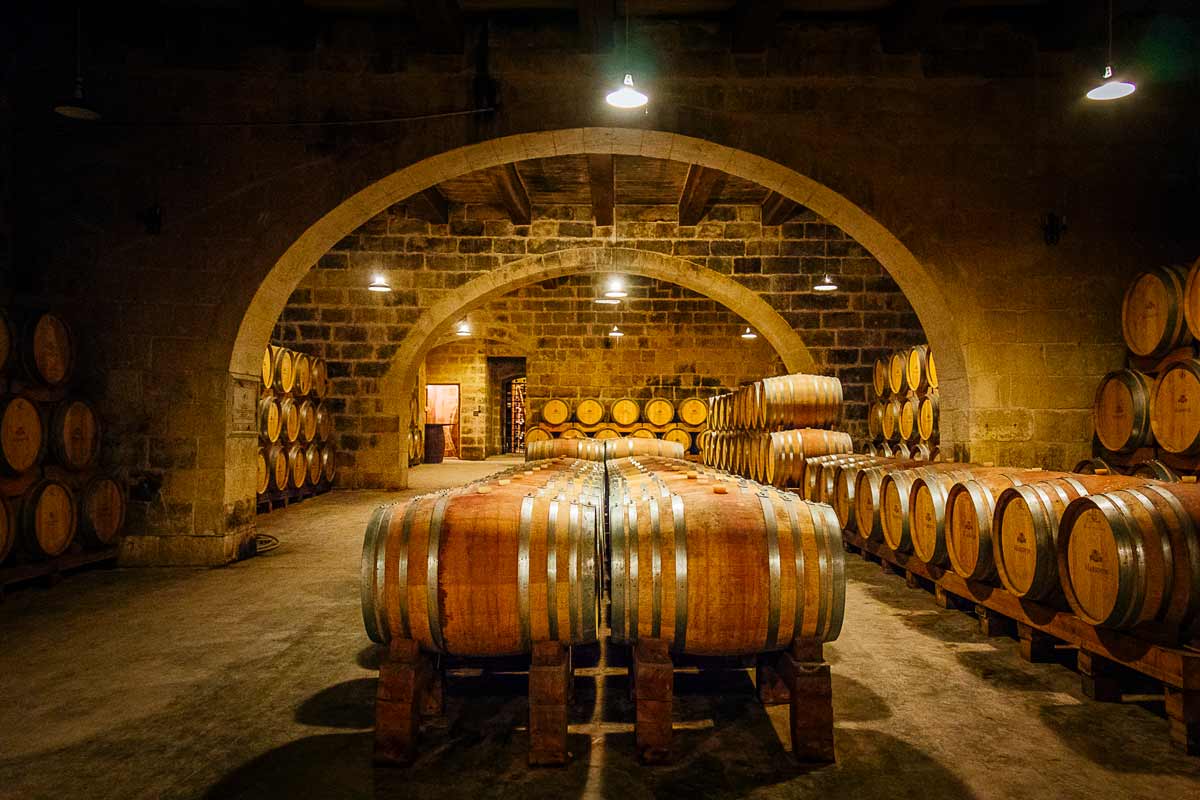 Some of Marsovins wines are aged in American-oak barrels, others in French-oak barrels.

Malta has two indigenous varietals, Girgentina and Ġellewża, that we covered in this post. In addition to Italian-influenced pasta and British-influenced pub food, Malta has its own cuisine. 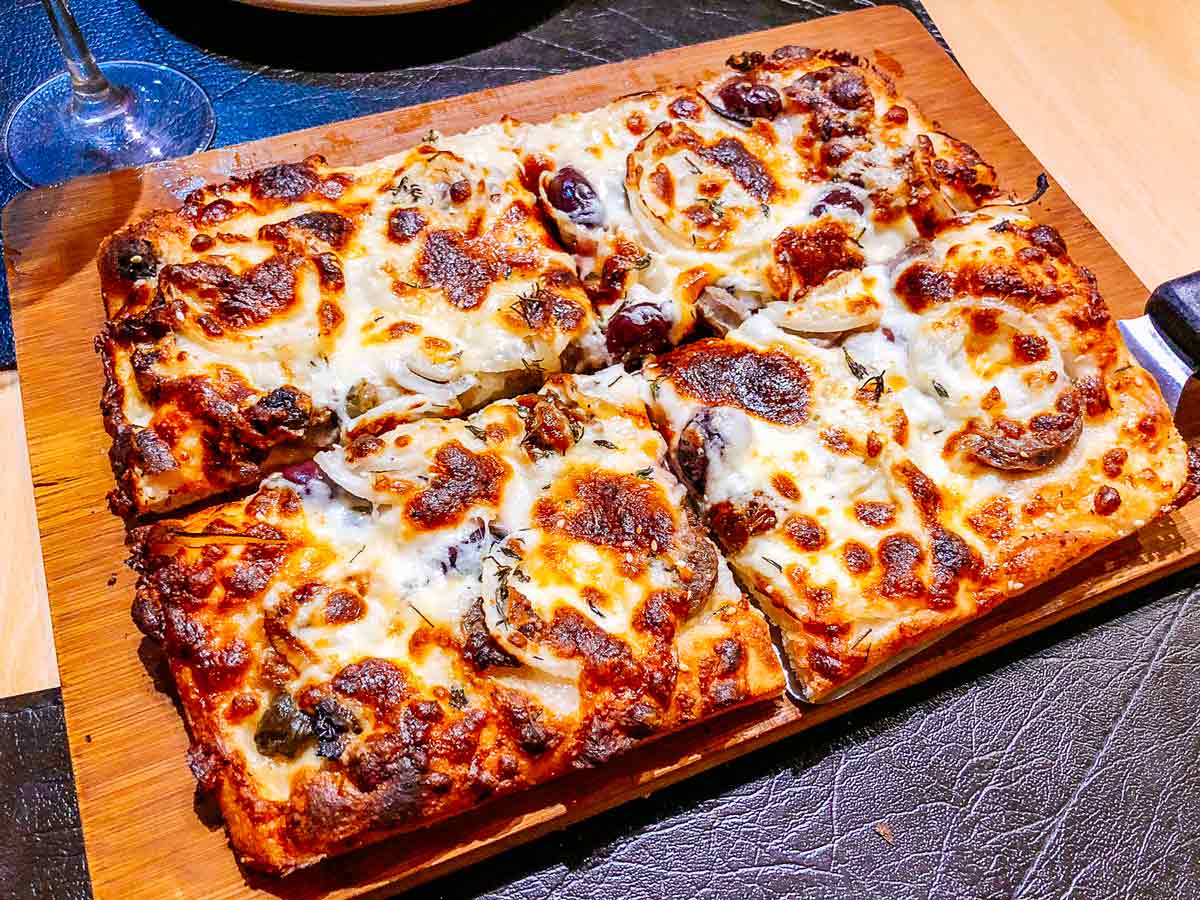 Ftira bread is usually filled with sardines, tuna, tomatoes, onions, capers and olives. On our first day, Rosemary had a ftira made into a sandwich with grilled veggies. For a dinner appetizer another night, we had a ftira that was topped with Maltese sausages, sun-dried tomatoes, kalamata olives, and Gozo cheese; it tasted and looked a lot like squares of pizza and it was delicious.

Timpana is a pasta pie: some kind of pasta with seasoned tomato sauce, baked in a flaky pastry crust, then cut into enormous cubes and served warm. On our first day, I had a traditional Maltese timpana for lunch. My timpana had penne as the pasta and the pastry crust was slightly sweet, which was a surprisingly nice flavor contrast to the sauce.

Beef olives: where are the olives?

Beef olives are actually from Britain, not Malta, but since Malta was part of the British Empire for 150 years, does that mean beef olives are now also Maltese? Probably not, but at a restaurant that advertised itself as serving only Maltese cuisine, beef olives were prominently featured. I ordered them.

The other point of confusion is that beef olives do not include any type of olives. “Olive” here refers to the cooking technique: wrapping meat around some kind of stuffing, browning it and the resulting shape is supposedly “olive-like.”

Regardless of their origin, the beef olives were good and generous; we took the leftovers back to the apartment for another dinner.

Rabbits are not indigenous to Malta but have been there so long that they are now considered Maltese. The Knights of Malta prohibited the local population from rabbit hunting, which was very unpopular. It is believed that Malta’s national dish, stuffat tal-fenek (stewed rabbit), first became popular as a symbol of resistance to the Knight’s rabbit-hunting prohibition.

We had rabbit in ravioli on two occasions. It was good and tasted similar to chicken. It didn’t seem to make the dish any better ~ or any worse.

So would we go back to Malta? 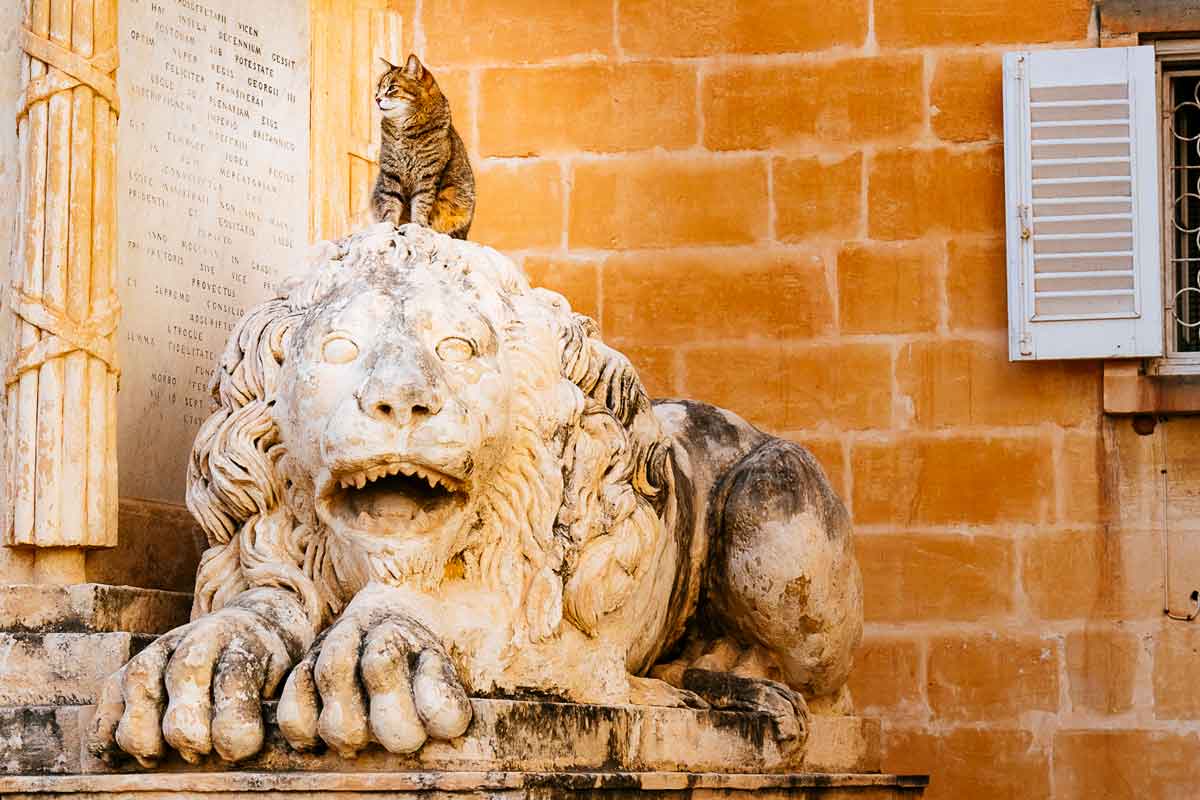 This cat seems to have aspirations of bigger things. Photographed in the Upper Barrakka Gardens, Valletta, Malta.

Malta in March is quite inviting:

So was our trip one of “yells, bells and smells”? Only in the positive sense. The locals converse passionately, as is common in the Mediterranean. Yes, the bells do chime frequently and at inconvenient hours. But the smells were of all the good food, so yes, we would go back.

*“an island of yells, bells and smells” ~ This quote is often attributed to Lord Byron, however, other sources state it was actually from the autobiography of David Niven.