Wondering what the dinner options are in Riga? Fine dining, comfort food or a meal made with locally-sourced ingredients; the choice is yours. 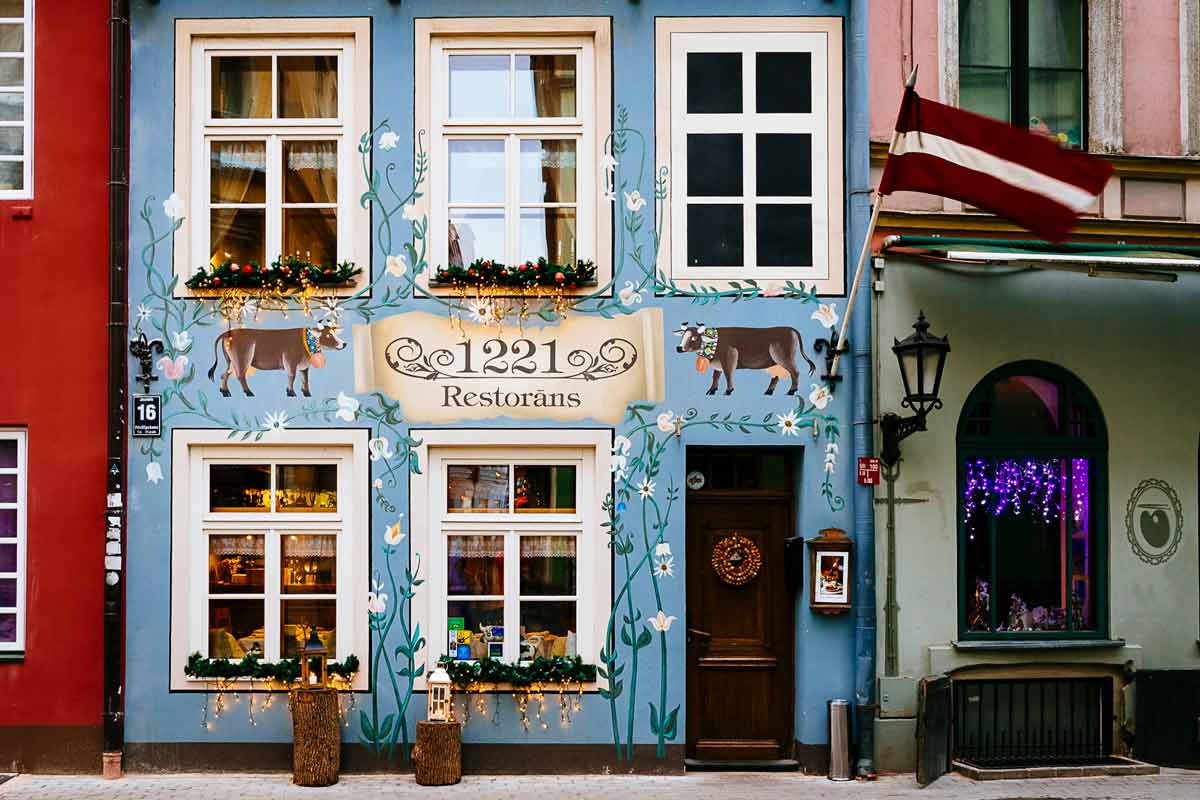 The charming exterior of 1221 restorāns, which specializes in delicious Latvian cuisine.

Fine dining at 1221 Restorāns, known for its traditional Latvian food

After a chilly 2½ hour walk, what could be better for lunch than hot beaver?

It was our first full day in Riga and, having just finished our walking tour of Old Town (read about it here), we wanted authentic Latvian cuisine for lunch. Our tour guide had pointed out this restaurant because of the food and the restaurant’s charming blue+cow motif. The interior was elegant and clean, with natural wood and restrained decorations. Soft jazz covers of “YMCA,” “Miss You” by the Stones and “Time After Time” by Cindy Lauper played in the background. I’m not sure if the music choice was purposefully ironic or not.

1221 prides itself on using the highest-quality, freshest natural products available. The menu included dishes like: 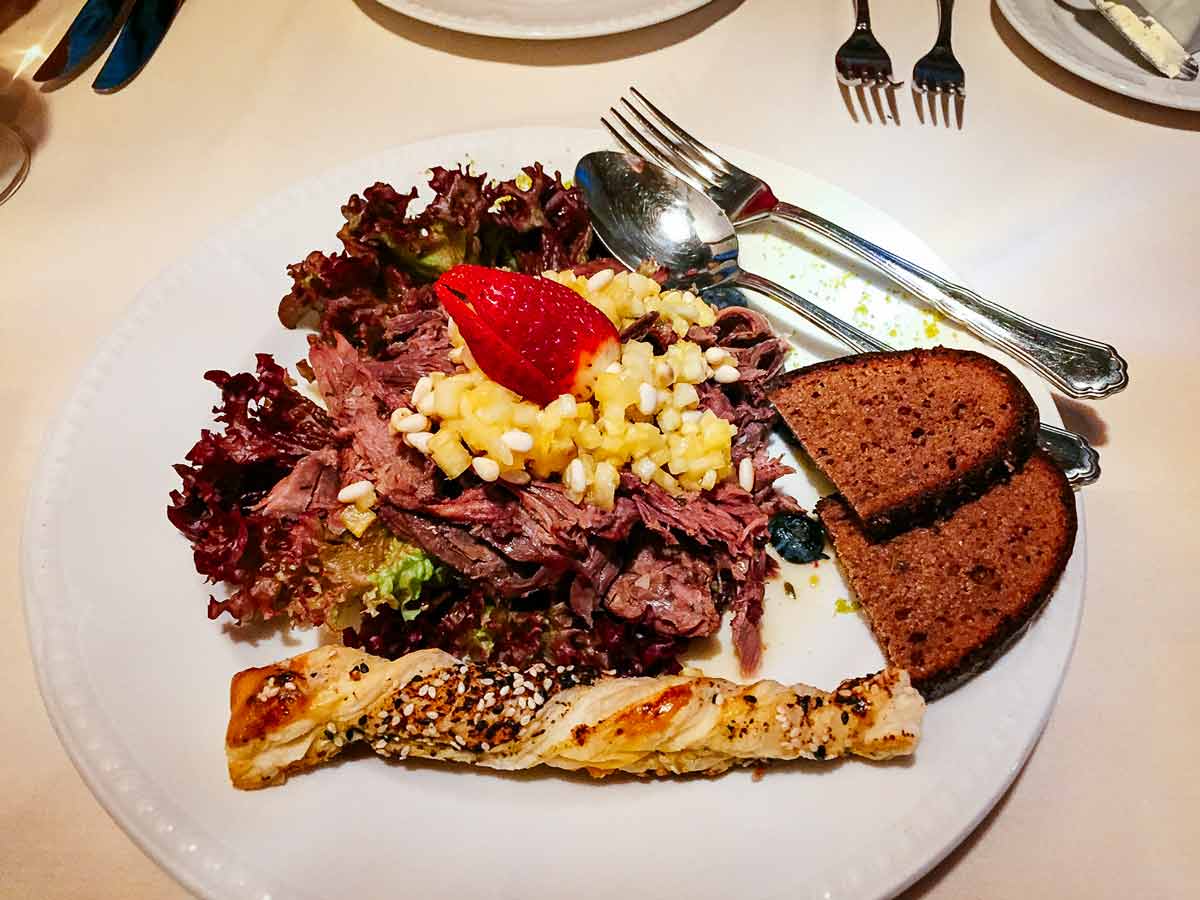 Latvian beaver is the star of this appetizer.

So how was the beaver?

We decided on the Hot Smoked Beaver Meat with cedar nuts and pineapple vinaigrette for an appetizer. The beaver was delicious. It wasn’t as gamey as we expected but it did have a texture reminiscent of venison. For our main courses, Rosemary chose the Elk Meat Goulash and I chose the Sauerkraut Soup served with pork Ribs Glazed in Honey and Mustard and fried potatoes. Both were delicious. 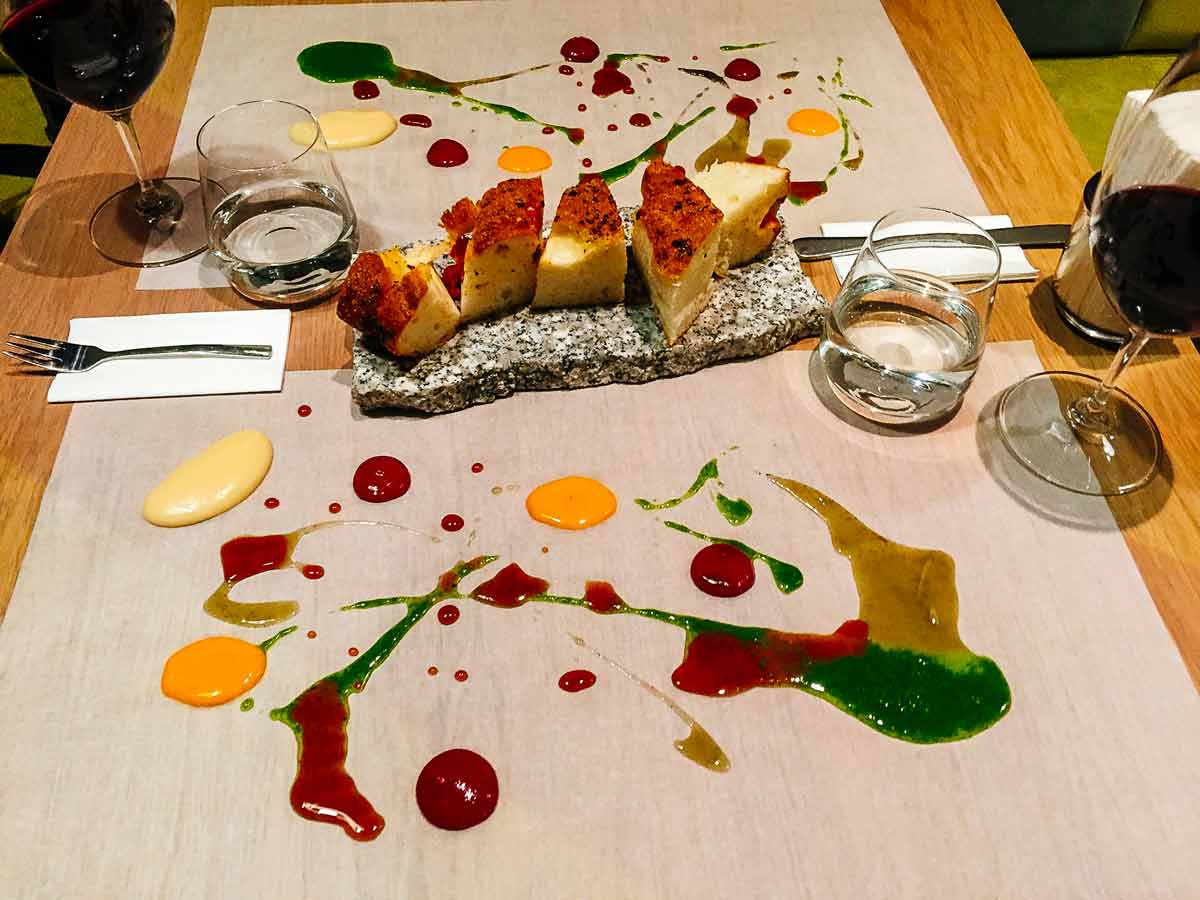 Six different sauces, drizzled like a Jackson Pollock painting, and fresh bread to sop them up.

As delicious as our main courses were, our favorite part of the evening was the appetizer. One of the chefs laid a large piece of white paper in front of each of us and poured six different colored sauces on the paper ~ raspberry, basil, one made from a berry native to Latvia, one was kind of tomato-y, the other two were a mystery ~ but they were all delicious. Using fresh bread to sop up the sauces, we enjoyed the sauces individually and in combinations.

Some nights are made for Comfort Food

Some nights we’re not in the mood for fine dining and instead seek out comfort food. For us, comfort food is Italian. We opted for Italian on two nights. The more memorable of the two meals was pizza (quattro formaggio) at a great little restaurant called Kolonade next to the Freedom Monument. The wine was a 2007 Conte D’Attimis Maniago Pignolo from the Friuli region of Italy. Dark red, full-bodied with hints of plum and blackberries, it went perfectly with the pizza. 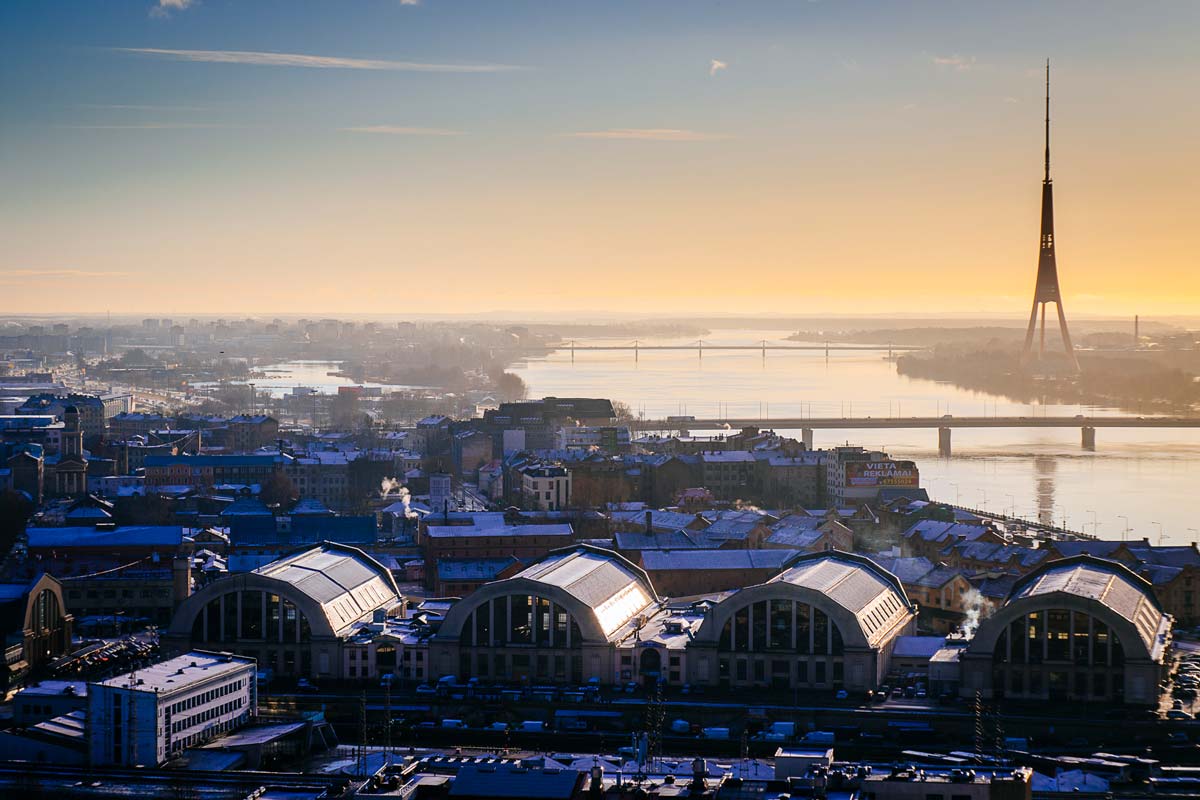 The five pavilions, Daugava River and TV tower in December mid-morning light as seen from St. Peter’s steeple. The fifth pavilion is oriented at 90° to the other four and its entrance can be seen in the shadows in the lower left.

Riga’s Central Market is the place for locally-sourced food

Locally-sourced food and original Zeppelin hangers ~ we couldn’t pass this up. The tops of WWI Zeppelin hangars Walhalla and Walther were used to complete the five pavilions of Riga’s Central Market, Europe’s largest market and bazaar. Each of the five pavilions is dedicated to a different specialty. In addition to the fresh food, prepared foods, flowers and clothing are also available.

How did Zeppelin hangers get to Riga?

In 1922 the Riga City Council decided to move the existing open-air, crowded and unsanitary produce market from the banks of the Daugava River to a new enclosed facility in order to meet modern sanitation requirements. The winning proposal from an international competition used the two Zeppelin hangers that still existed at a nearby, abandoned, German airbase. Due to space and weather requirements, only the top portions of the two hangers were used to fabricate the five pavilions at the Central Market.

A guided tour of the market with a local guide

We’ve found that taking a tour with a local guide is a great way to get to know a city so we booked a foodie tour of the market. For maximum benefit, we scheduled our two-hour tour in time for a late lunch.

An overwhelming number of choices

Each pavilion ~ meat, vegetable, fish and dairy ~ was full of fresh product; the sheer number was a bit overwhelming (the fifth pavilion, the gastronomy pavilion, was closed for repair). And if that wasn’t enough, there were vendors set up around the exterior of the buildings, even in the chilly December weather.

Beginning at the meat pavilion

We began in the meat pavilion where we sampled some pork, both cold and smoked. Our next stop was at one of the prepared food vendors to sample three salads:

Grey peas, even though they are actually brown, have been part of Latvian cuisine for centuries and are an integral part of Latvians’ traditional Christmas Day meal. In 2015 grey peas were registered as Protected Designation of Origin of the European Union, just like prosciutto or Champagne.

After the salads we needed something to drink, so our guide introduced us to kvass. Kvass is traditional beverage made from rye bread and fermented to a very low alcohol level (.5~1%). Some varieties are flavored but our kvass had no additional flavoring and tasted like mild rye bread.

Next was the vegetable pavilion with a vast selection of fresh fruits and vegetables. Because of the northern climes, Latvians have learned how to pickle just about anything. We sampled pickled cucumbers and pickled pumpkin.

By this time we arrived in the fish pavilion we were feeling overwhelmed at the sheer volume of available products. From the multitudes of fish, we sampled baked lamprey and sprotes in oil (sprotes is a brand name for sprats, a small, herring-like fish). Then our guide arranged a small picnic where we three had traditional rye bread with sprotes, lamprey and pickles. Rye bread is very common in Latvia and seemed milder than the rye bread we’ve had in the States.

The dairy pavilion had oodles of cheese. We sampled Jani cheese (named after Latvian summer solstice festival) with caraway seeds and also tried some hemp-seed butter. Hemp-seed butter is sometimes called “Latvia’s black caviar” and has a mild taste.

We finished our guided tour with sweets, coffee and tea. Since Latvia is know for its honey, we tried the Latvian honey cake. It was tender and slightly sweet ~ quite delicious.

As we noshed on our cake, we talked about our favorite thing from the tour (Scott, kvass; Rosemary, the enormous selection of vegetables) and just how many things were available in the market. Even though we were full and overwhelmed, our two-hour tour was over too soon. There was just so much more to taste.

Perhaps, then, the Central Market is an apt metaphor for Riga: historic, so much more to see and do than expected, leaving one wishing for more time there.

If you’d like to read more about our visit to Riga, please check out these posts:
Riga, part 1: Riga’s Charming Christmas Market
Riga, part 2: What is Riga famous for?