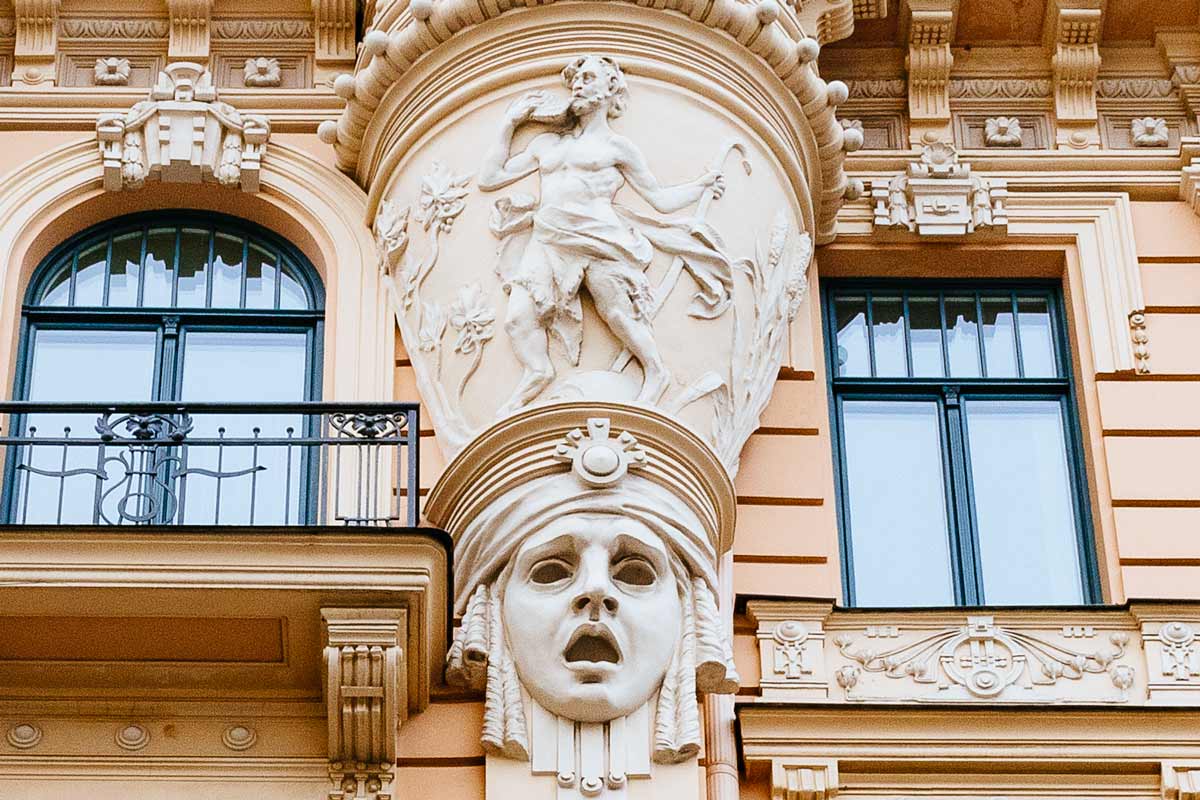 Art Nouveau buildings in Riga feature stylized human faces in addition to the characteristic undulating curves of the style.

“Did you know that Riga is famous for its substantial collection of Art Nouveau architecture?” our guide asked as our 2½ hour walking tour ended in front of Riga’s Freedom Monument. Skip photo gallery and continue reading >>

Story continues:
We knew that Riga is famous for its Old Town (Vecrīga), which is a UNESCO World Heritage Site, but we did not know about Riga’s famous Art Nouveau architecture. But then we knew very little about Riga. That, in addition to the Christmas Market, was one of the reasons we decided to visit Latvia’s capital city.

Before diving into Riga’s Art Nouveau history, let’s begin at the beginning and, just as on our walking tour, wind our way literally and historically through Riga before finishing at the Freedom Monument.

Meeting our guide at the Monument to the Latvian Riflemen

The House of The Blackheads

Who were the Blackheads?

Continuing on, one narrow street beyond House of the Blackheads is the church of St. Peter. The first written account of the church was in 1209. The church was destroyed and rebuilt twice: once in the 18th century and again in the latter half of the 20th century. The most recent reconstruction was completed in 1991. The tower now has an elevator that takes visitors to a viewing platform in the steeple.

St. Peter’s could be an apt symbol for Riga: the church dates from at least 1209 and has been destroyed twice before finally being rebuilt in 1991, much as Riga, dating from at least the 2nd century A.D., has endured centuries of conflict and destruction before emerging as a rebuilt, free country at the end of the 20th century.

Leaving St. Peter’s and making our way through the narrow winding streets we end up at Riga’s Freedom Monument. Unveiled in 1935, it was built to honor the soldiers killed during the Latvian War of Independence (1918-1920). The three stars held aloft by the female personification of Liberty represent the constitutional districts of Latvia (Vidzeme, Latgale and Courland). During the Soviet Era, the three stars were “reinterpreted” as the three Baltic Soviet Republics (Estonia, Latvia and Lithuania). Today they once again represent Latvia’s constitutional districts.

The Freedom Monument is at the epicenter of Riga’s architectural history and, by extension, it’s overall history. The monument faces Riga’s Old Town. To the left and right are the city canal and a park which was developed in the latter half of the 19th century as a replacement for the old town walls. To the rear of the monument is the newer parts of Riga and to the monument’s far right is the Art Nouveau district.

Art Nouveau in Riga: how?

Survey courses of art history generally discuss Art Nouveau in terms of Paris (the entrances by Hector Guimard, see example in the photo gallery), the Vienna Secession (the art of Klimt) and the U.S. (Louis Comfort Tiffany), so how did Riga end up with the largest collection of Art Nouveau buildings in the world?

The answer is that Riga underwent such a financial and demographic boom during the second half of the 19th century that, by the beginning of the 20th century, much-needed housing was being built outside the old city walls. This period of intense construction coincided with the height of Art Nouveau’s popularity, so most of the new buildings were constructed in the Art Nouveau style.

In only 2½ hours, we had walked over 800 years of history. Beginning with the church of St. Peter, we went from 1209 to the 14th century (House of the Blackheads) to the 19th century (the city parks and Art Nouveau), finally ending in the 20th century (the Freedom Monument and the Monument to the Latvian Riflemen). We definitely succeeded in our goal of learning more about Riga.

More about our visit to Riga

If you’d like to read more about our visit to Riga, please check out these posts:
Riga, part 1: Riga’s Charming Christmas Market
Riga, part 3: Riga Fine Dining and a Locavore’s Shopping Paradise

I have tried to only provide an overview based on our visit to Riga, but if you’re interested in reading more about any of these topics these web pages are a good beginning.