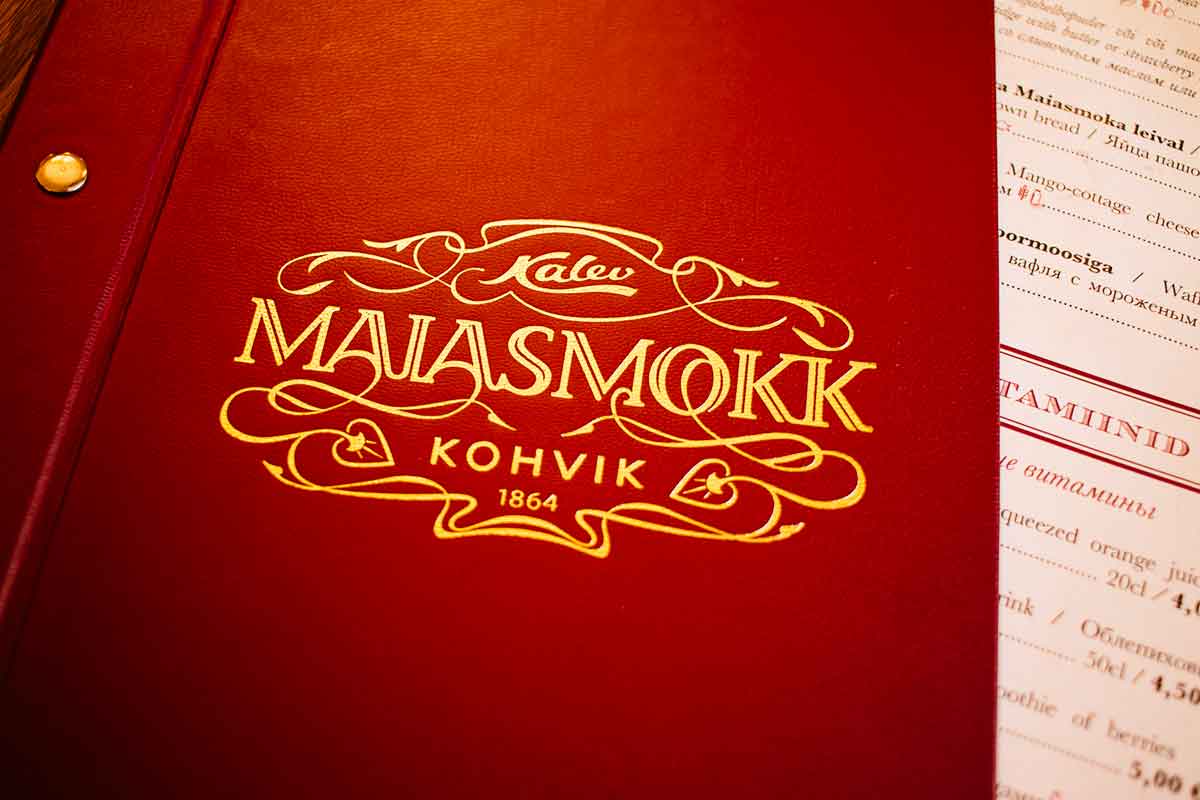 The menu of the delightful Maiasmokk café in Old Town Tallinn.

I think the best type of souvenirs from a trip aren’t the ones filed away in a scrapbook or buried in the photo library on your computer, they are the ones that become part of your everyday life. One of our favorite souvenirs is to recreate a delicious meal unique to wherever we visited and add it to our regular menu.

In Tallinn, we had a superb beetroot and blue cheese orsotto for lunch at Maiasmoka Café. Orsotto is like risotto but made with orzo, a rice-shaped pasta, instead of rice.

Maiasmoka means “sweet tooth” because this shop is renowned for its sweets and marzipan. Marzipan in Tallinn dates back to at least 1422 and, according to local legend, was invented in Tallinn. During the second half of the 19th century, Maiasmoka’s marzipan was delivered to the Russian imperial court.

We went in to the café for some marzipan, but, since it was lunch time, we ordered lunch instead.

I ordered the Maiasmok breakfast, a feast of fried eggs, smoked ham, pickled cucumbers, black bread, mushrooms and cream cheese. It was a feast for only 6 Euro. Rosemary ordered the beetroot orsotto (a photo is in the gallery at the top).

The beetroot “orsotto” was made with barley (instead of orzo), beets and blue cheese. It’s a perfect dish to make in Poland because the Poles love root vegetables. We’ve made it once since returning home ~ it’s a work in progress. The blue cheese makes this dish pair splendidly with an Italian red wine. Yum!

A Favorite Souvenir from the Italian Riviera

One of first trips to Europe was to Ventimiglia on the Italian Riviera. We flew into Milan, then took the train; the entire trip took 36 hours and we were exhausted when we finally arrived.

What is that green stuff?

We arrived in the late afternoon which was still too early, by Italian standards, for dinner, so we went to our room and slept for a couple of hours. After we woke up, we stumbled down to our prix-fixe dinner and found a table. The staff took our beverage order and then brought the food. The main course was pasta that was … green.

I didn’t know that pasta could be green. As a general rule, I try to avoid eating anything green, including lettuce, but I was really hungry and didn’t want to offend our hosts, so I ate it. It was delicious.

That green stuff, a.k.a. pesto

The green stuff was pesto, a traditional Ligurian sauce commonly used on pasta. Pesto alla genovese, the quintessential pesto recipe, is made with Genovese basil, coarse salt, garlic, Ligurian extra virgin olive oil, pine nuts and a grated cheese. We don’t often make our own pesto, but ever since that trip our weekly menu usually includes a pasta dish made with pesto. Of course it’s paired with an Italian wine, usually from the Langhe or Puglia.

Epilogue: Once dinner was over, our hosts asked that we put our used napkins in an envelope that was on our table. I think the reason was that this indicated we had eaten our included meal, but I’m not really sure.

A Favorite Souvenir from the Yucatan

On a trip to Mérida, Mexico, it seemed like cochinita pibil was on every menu. Cochinita pibil is a traditional Yucatán dish made of slow-roasted pork; we always saw it served with corn tortillas, red pickled onions, avocados and hot chili sauce. We loved the avocados, the hot sauces and the pickled pink onions but found the pork to take too much time and effort on a work night. We substituted refried beans for the pork, which made it easier to make, added cheese and called the recipe “Yucatacos”. We typically pair it with a Spanish or French Grenache, or sometimes a red from Sicily.

A Souvenir to pair with Chateauneuf du Pape reds

On one trip to France we stayed in L’Ilse sur la Sorgue, which is roughly midway between Chateauneuf du Pape and towns like Gordes and Roussillon. Wines from Chateauneuf du Pape are my favorite, so on our first full day we drove there and bought a red for every dinner. Having purchased the wines, we then needed to figure out the food. Fortunately Avignon, with its renowned farmers’ market, is close to Chateauneuf du Pape.

Avignon’s market is fantastic, full of fresh produce, cheeses, meats and fish. Cheese and wine is a natural pairing, but a meal of only wine and cheese wouldn’t be very healthy. Taking advantage of the bountiful selection, we added apples, pears, dates, figs, a bit of honey and some bread to the menu. What a feast.

Our next favorite souvenirs?

After enjoying the black breads in Denmark and the Baltic countries, we are thinking about modifying our Better Homes & Gardens black bread recipe. There is a local soup, żurek, that is quite satisfying on cold, rainy weekends, so that may end up in our menu. And hopefully we’ll get a chance to learn how to make real pierogi. And who knows what else? Stay tuned!

There’s much more to Tallinn

If you’ve enjoyed this quick glimpse of our visit to this beautiful city, please check out these posts:
Tallinn part 1: A Christmas Market in the oldest capital city in northern Europe
Tallinn part 2: A Submarine and a KGB artifact